I felt fear when I was being pushed out of the door of the plane and hanging out in the open. There was nothing I can hold onto and there was a world of desert in front of my eyes. There was no chance of backing out of this one. I looked at the wing of the plane and saw my videographer standing on the wheel of the plane. I saw him smiling at me and that was my last moment before I started my skydiving with the skydiving los angeles ca team, and since we were on vacation and we wanted to experience all the best activities in the city, we stayed in great hotels that offered services from a Los Angeles limousine company, this allowed us to visit many places around the city. 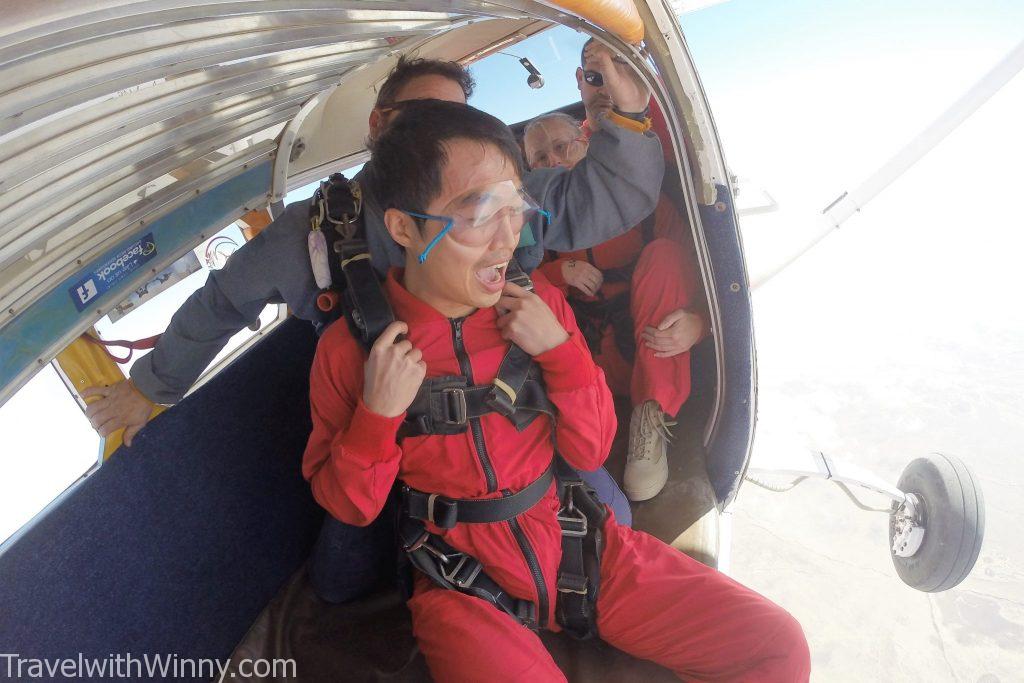 The fear on my face when I got pushed out of the plane!

I remembered my first family trip in New Zealand ten years ago. I begged my mum to let me go skydive in Queenstown, but she bluntly refused as she thought it was too dangerous. Being a teenager and bit of a brat, I said that I would be skydiving in the future anyway and instead of letting me skydiving here where it’s safe, you would be seeing me skydiving in Africa instead!

Fast forwarding Ten years later, I am in Namibia approaching a town called Swakopmund. It is a touristy town made for European travellers and retired German people. The town itself is beautiful. It has old colonial buildings and it is located in a desert along the coast. Namibia used to be occupied by Germans until Germany lost World War I. 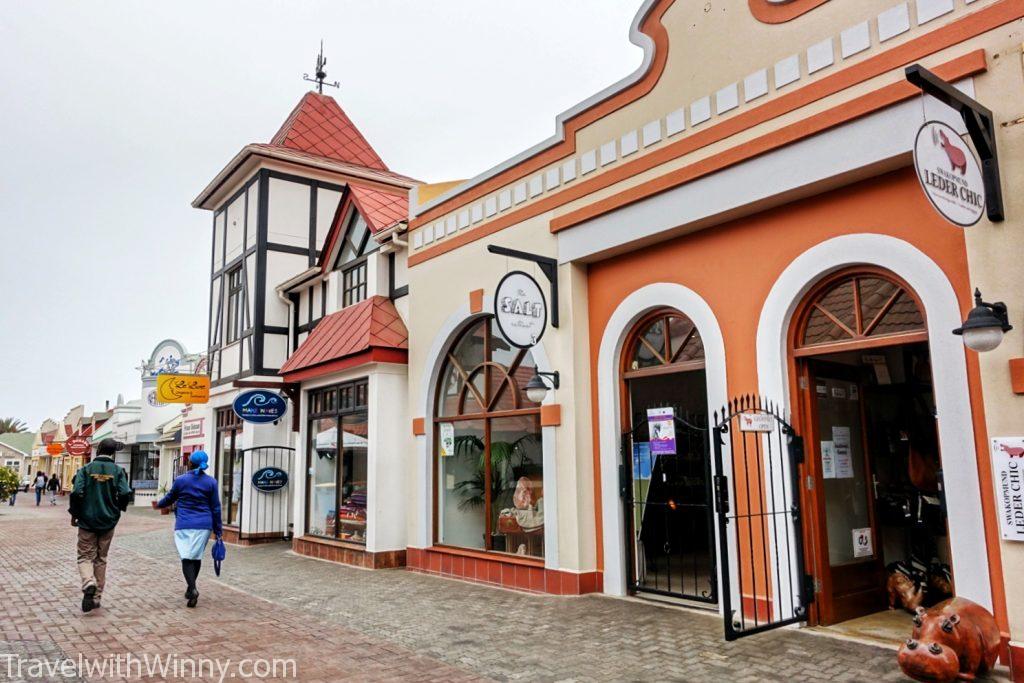 The city centre has many cute German buildings back from the colonial days.

When I was first asked if I wanted to skydive in Namibia by Winny, I said no way. I doubted the safety especially when I have seen footages of a bungee line snapping in Victoria Falls a few years ago. However, when I arrived in Namibia and had spoken to a few South Africans, we found out that Namibia was in fact quite modern. 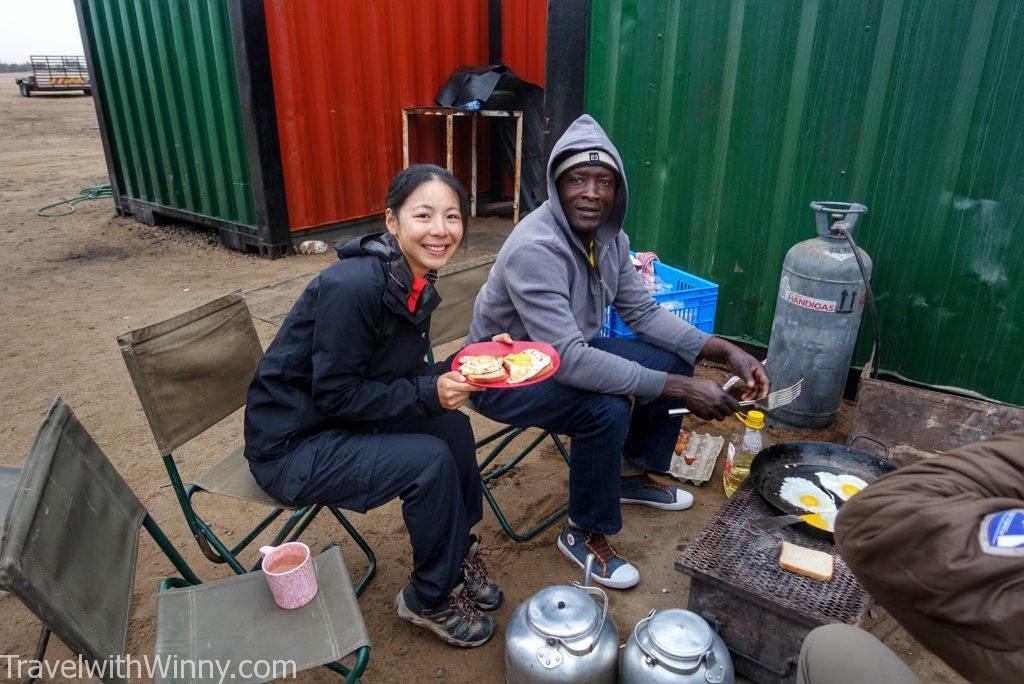 Swakopmund was the only place during our 3-week trip where we didn’t sleep in a tent, however, we still had breakfast outside cooked by our chef.

I began to read up about the safety of the companies online and found out that they actually have safety standards equal to the rest of the world. An instructor would require having done over two thousand jumps by themselves before they are qualified to do tandem jumping. The company that we went is called “Ground Rush Adventures“. They were one of the first companies that started skydiving in Namibia. Namibia turns out to be the cheapest place to skydive in the world priced at $2500 Namibian Dollars which is equivalent to around $240 AUD. 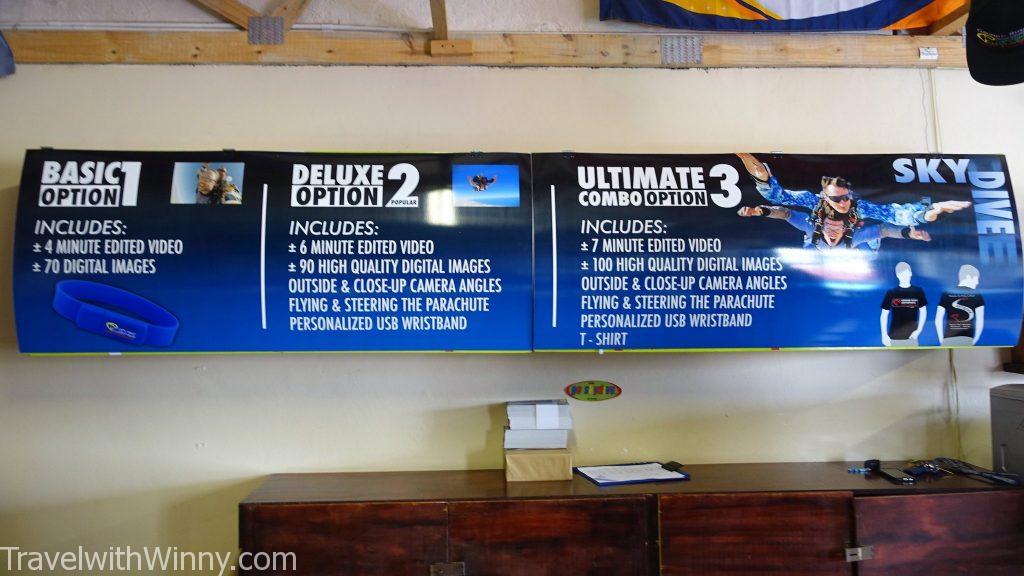 Ground Rush Adventures have very good safety records of operating over many years without any accidents. They also operate with good morals as they try to keep the skydiving sport alive by charging cheaper for the video option where a videographer jumps with you. 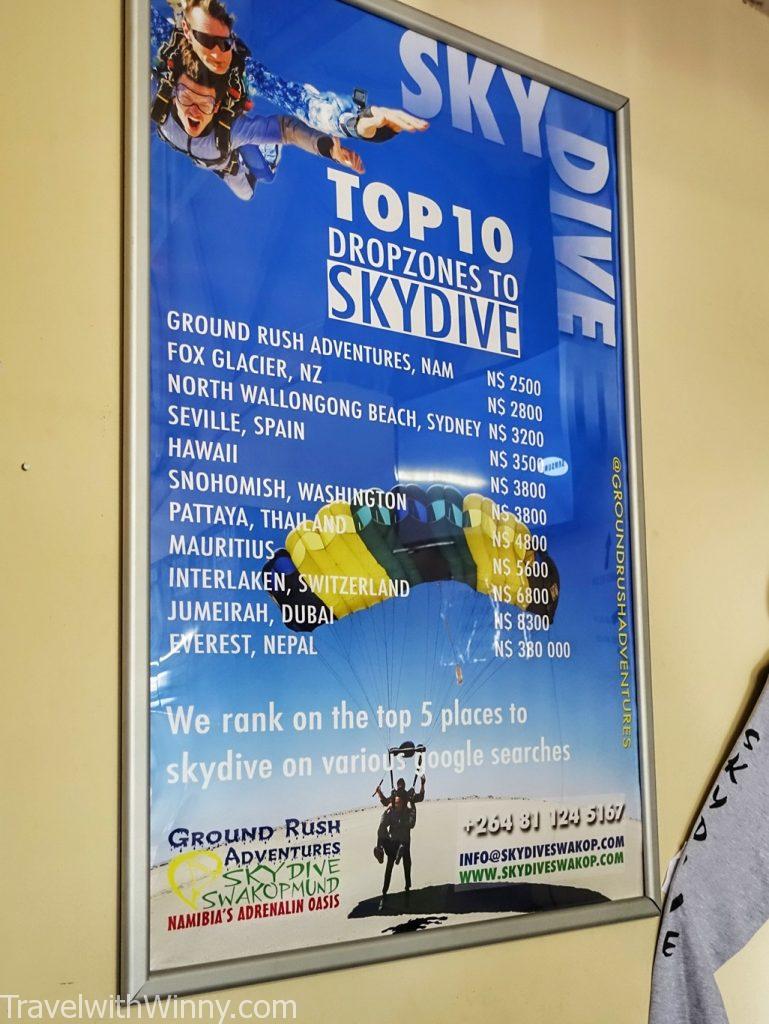 Most other skydiving companies in the world would charge the videographer as the more expensive option and cheaper for just an action cam tied to the instructor’s arm. As each skydiver needs two thousand dives before they can do tandem skydiving, many skydivers can increase their counts by working as videographers. 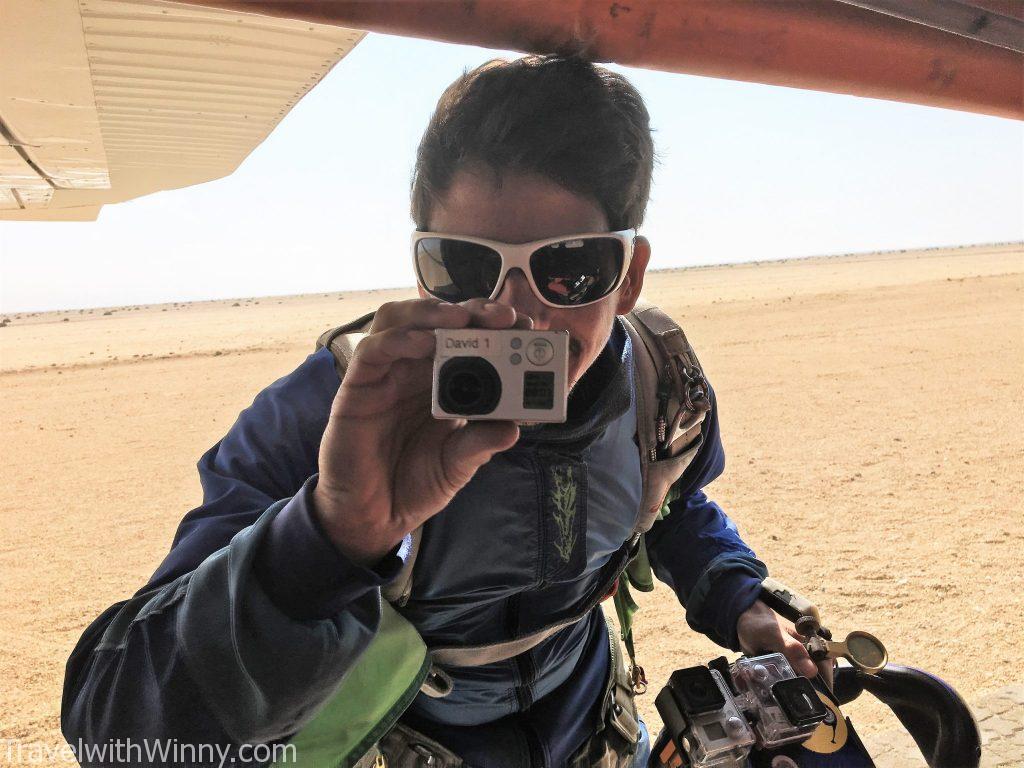 My videographer for the skydiving in Swakopmund.

On the morning of my skydive, Swakopmund was covered in fog. Due to the location of the town, fog is quite common throughout the year! There whole coastal region is famous for shipwrecks as many ships have sunk or are damaged due to being lost in this smoke. As a result, my skydiving was delayed until later in the afternoon pending on the clearing of the fog. 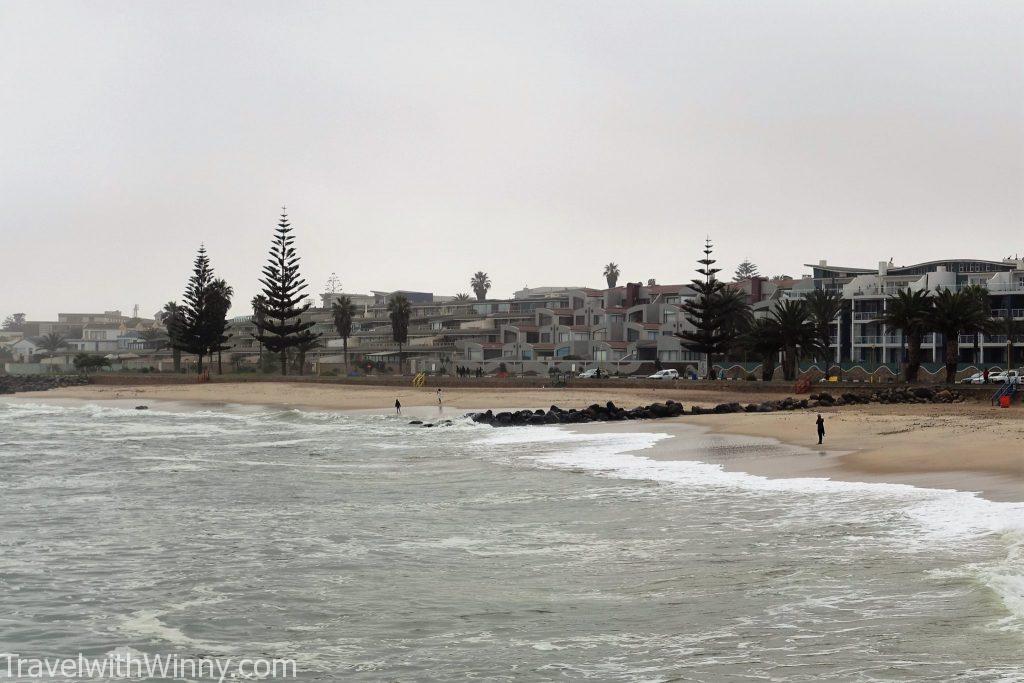 The morning before I did my skydiving in Swakopmund, it was covered in dense fog.

Luckily the fog did clear and we were picked up by a driver and taken to the town centre office to sign some paperwork and pay my fees. We were then taken to the coastal areas where they do the skydiving. Soon after we leave the town of Swakopmund, it was just endless desert in one direction and sea in the other. 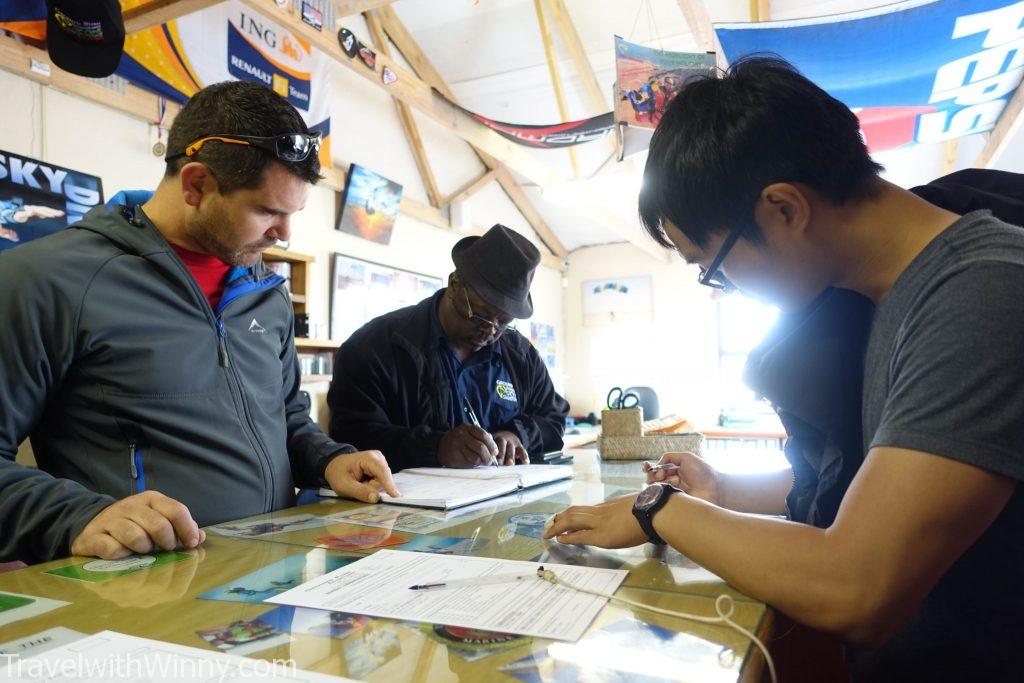 Signing my life away in the Ground Rush Adventure office.

It was hard to imagine how or why they chose to build a town here in the first place. The driver was interesting to talk to as he used to be a skydiver as well and he has so much passion for it still. The driver is now old, so he no longer skydives, but he has skydived at many places before. 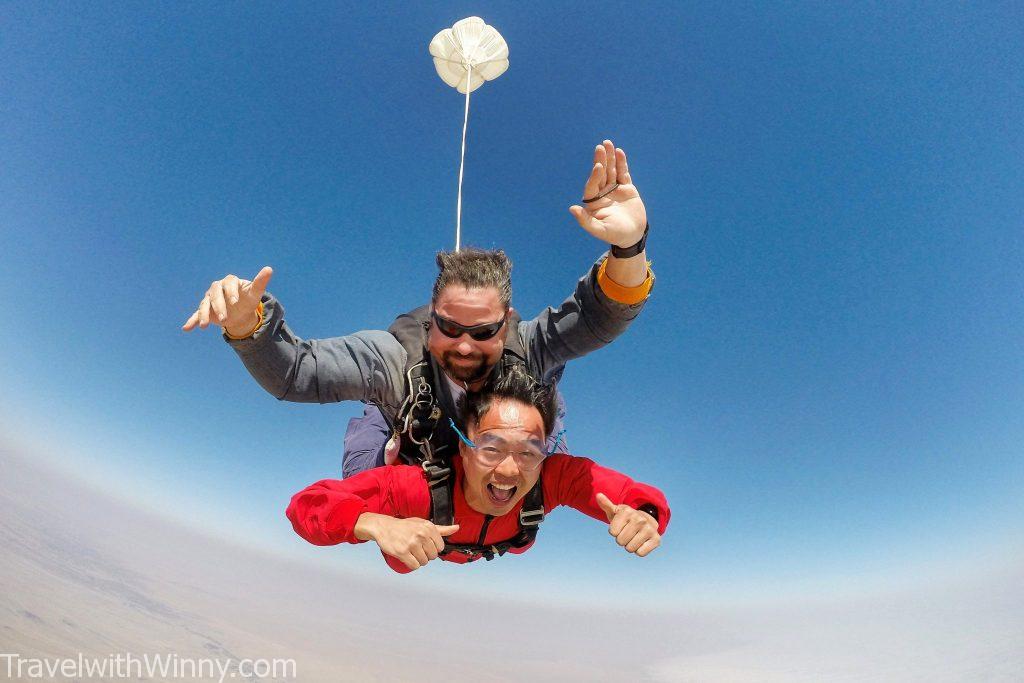 Skydiving is such an awesome extreme sport to take up! No wonder people can never semi-retire from it!

Once we arrive at the skydiving station, we were greeted by the skydiving instructors who kindly explain to us what we needed to do, what gears to wear and show us the planes that will take us into the air. At first, the planes look a little scary as they were so small. Winny told me that the plane they used in Cairns, Australia was a lot bigger. 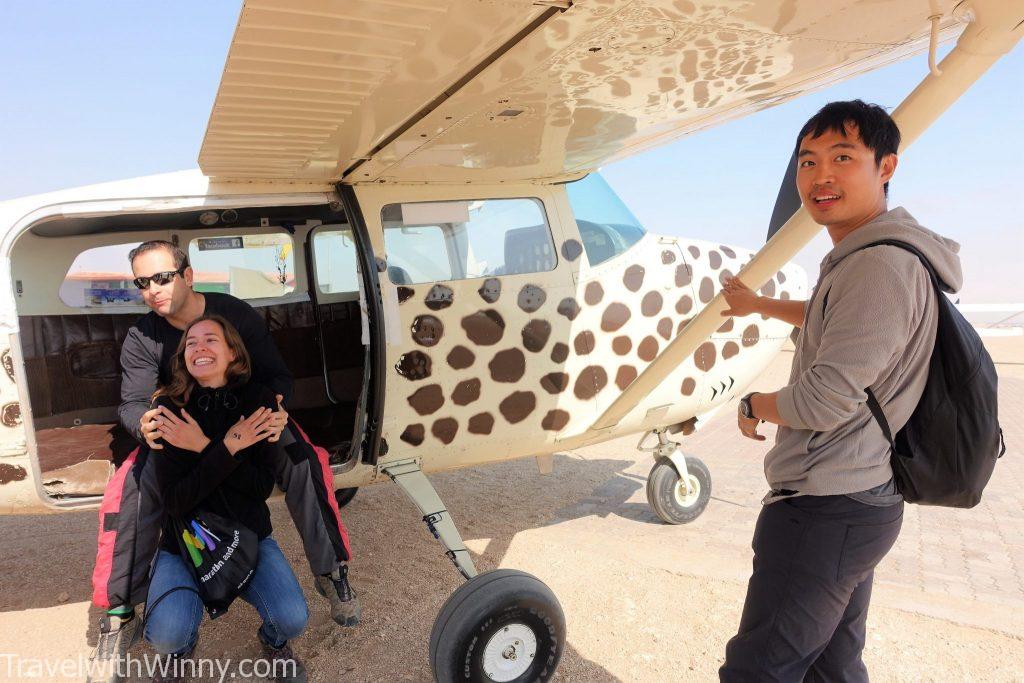 The instructor was explaining to us about the procedure up in the air before take-off.

Secondly, the planes had a bit of duct tapes sticking things down. I was told later that this was because the plane seat and everything had to be taken out of the plane to fit all the people and gear. This was commonly seen in other skydiving planes. However, it was quite unsettling for noobies like me to see duct tape on planes. 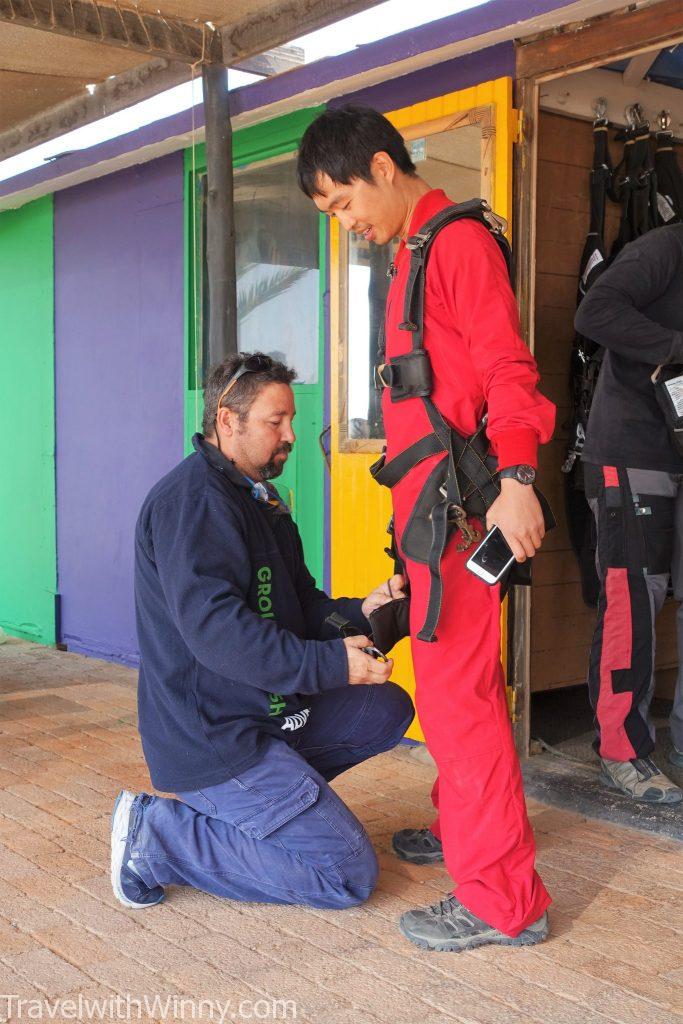 My instructor making sure the jumpsuit and buckles are secure enough for the dive.

Thinking back, the most nervous part about the skydiving is the waiting period. As more and more people were called to the plane to dive, the anticipation was nerve wrecking. Soon, my name was called and I was off to a plane. I was paired up with a white Namibian skydiver and he told me that he was a born and bred Namibian. He was larger than me and I felt quite secured tied to him in the air. 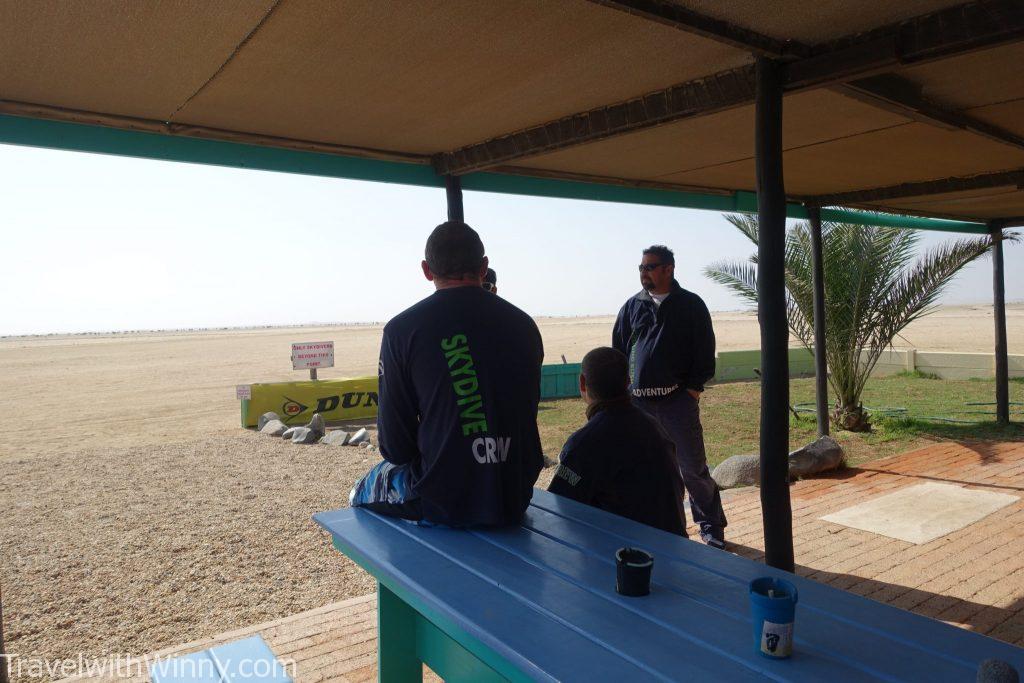 Waiting around was nerve wrecking

The tiny planes felt like toy planes and it took off comfortably without much speed. We did a few circles in the air which allowed us to see the desert view from above. Swakopmund looked like an oasis in the desert. At that moment the ocean was still covered by the clouds. 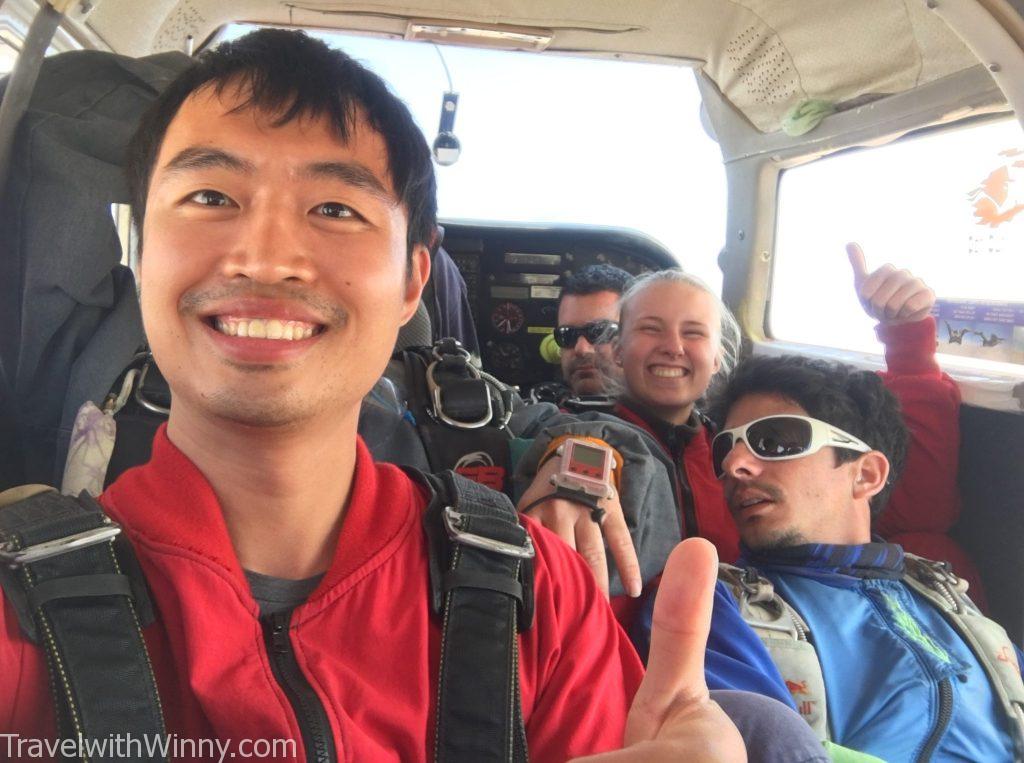 Mid-air photo. Two groups of skydivers preparing for the jump. Will soon be my first skydive in Swakopmund!

There were two groups of jumpers on the plane including my group. As I was sitting furthermost away from the plane door, I was certain that I would be the second person to jump. I told myself that I had a bit of time to prepare myself even when the plane door opens. 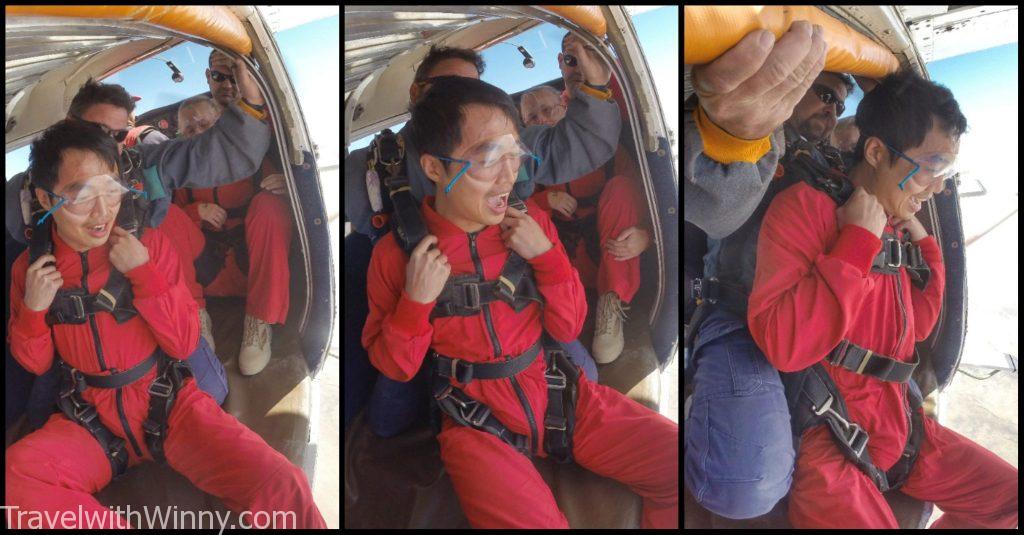 I was just not ready to be leaping out of a perfectly functioning plane!

Soon the plane levels up and the pilot gave the permission to go ahead with the jump. The plane door was pulled open. Unexpectedly I was pushed to the side of the plane heading out the plane first. Out of shock horror, I realized that I was actually the first one to jump. Before I had any chance to say my last words, the instructor tilted my head back and leapt out of the plane door. 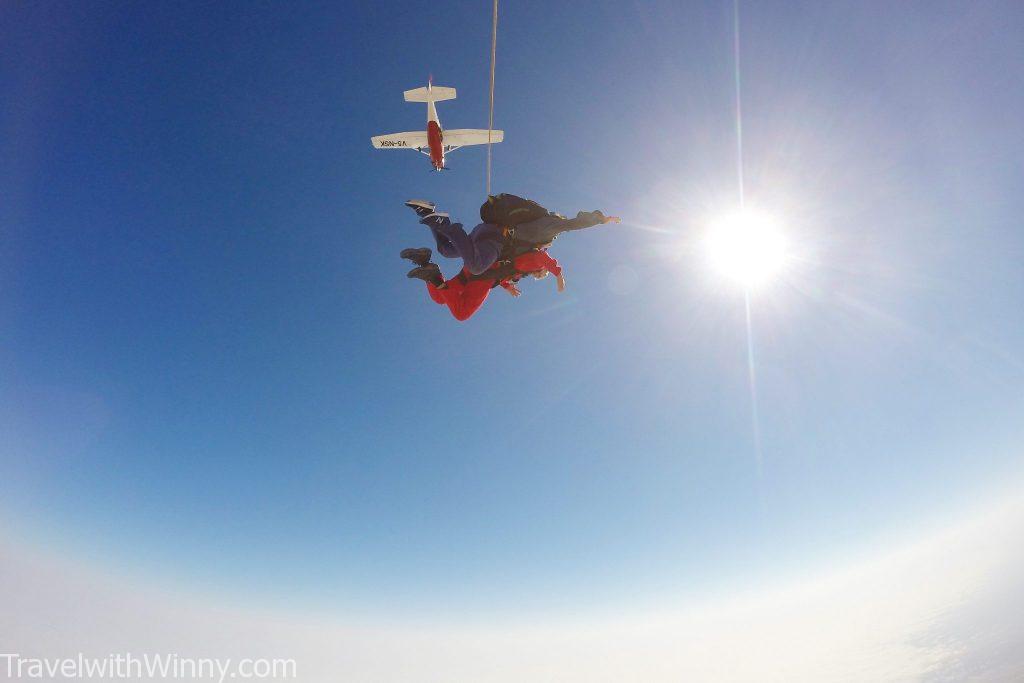 Moments after we jumped off the plane and experiencing free fall!

I never thought that moment would come, and everything felt like slow motion in the first few seconds. In the first moments I was clinging to my harness so much and so focused looking down, I didn’t realize that my diving instructor was, in fact, trying to get me to open up my arms. Before long, I had my arms out open, began to embrace everything and started to have fun. 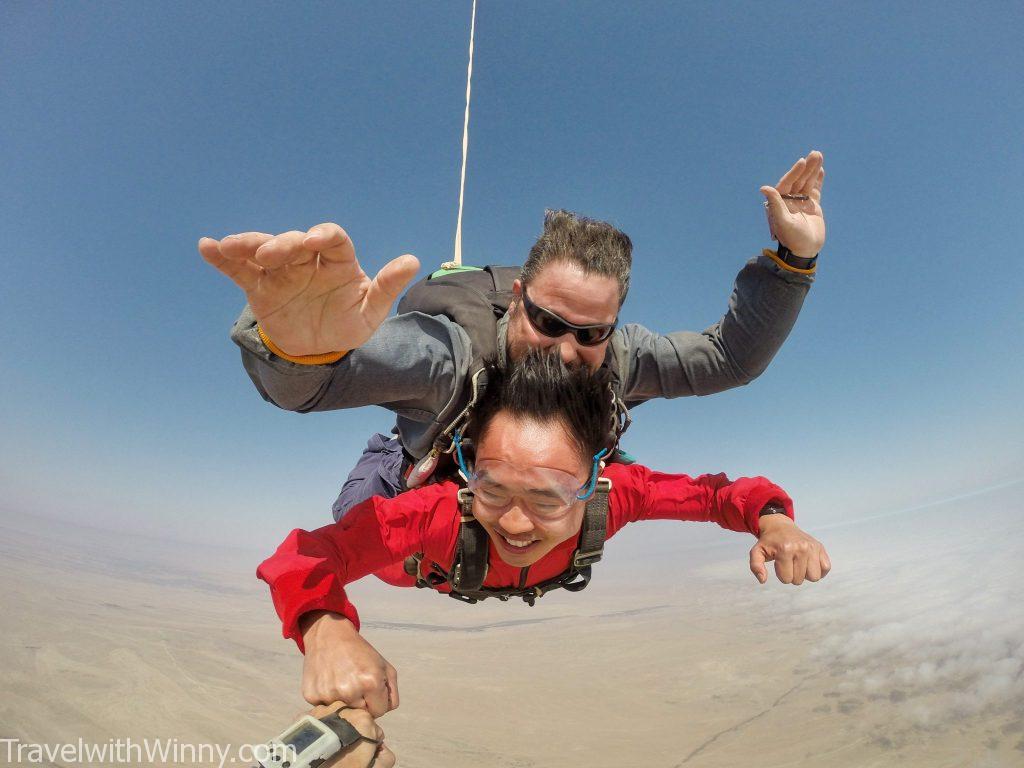 My videographer was amazing at controlling his height mid-air! He was able to even fist bump with me!

My instructor and videographer were great. They did everything they can to ensure that I had a good footage and had fun. There was a spin in the air and the videographer even fist bumped me. Before long, the parachute was pulled and we were hanging in the air after 30 seconds of free fall. The parachuting down was extremely fun and was felt scarier than free fall. Especially when we were making quick turns and swoop downwards, my heart stops a little. 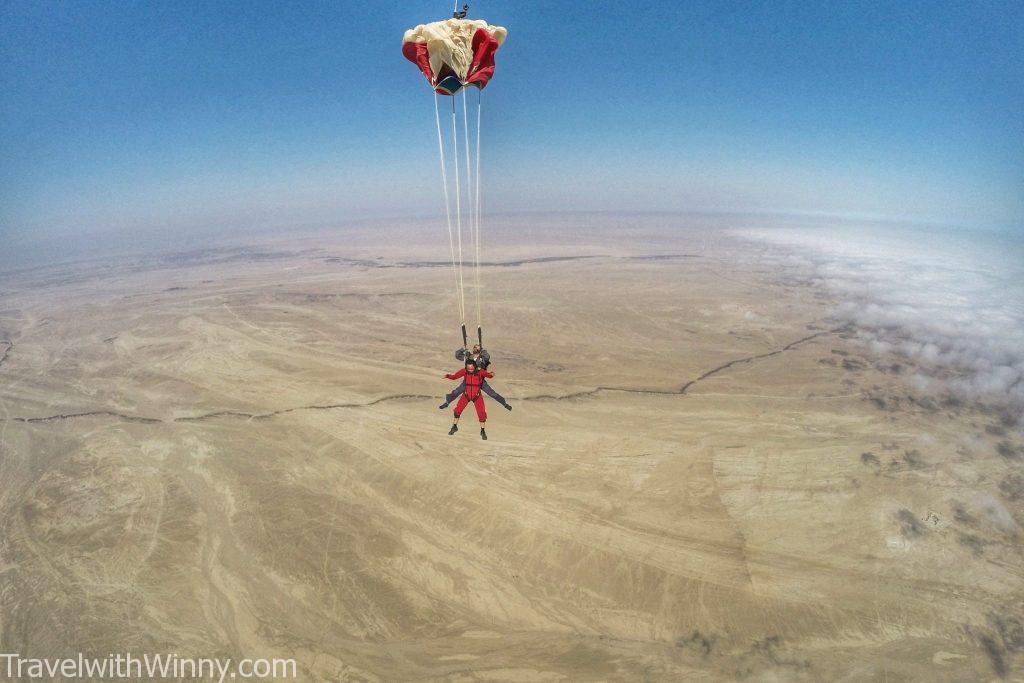 The instructor swoops left to right to make the gliding experience exciting!

By the time we hit the bottom my heart was pounding so much and I was full of adrenaline. I felt extremely light-headed and little nausea. Winny kept laughing at how red my forehead was. I’m not sure if this happens to anyone else, but during the skydive, I felt like my head was full of blood and felt like it was exploding. I was so light-headed that I didn’t manage to finish my free beer after my skydive!

My Interview after the Jump 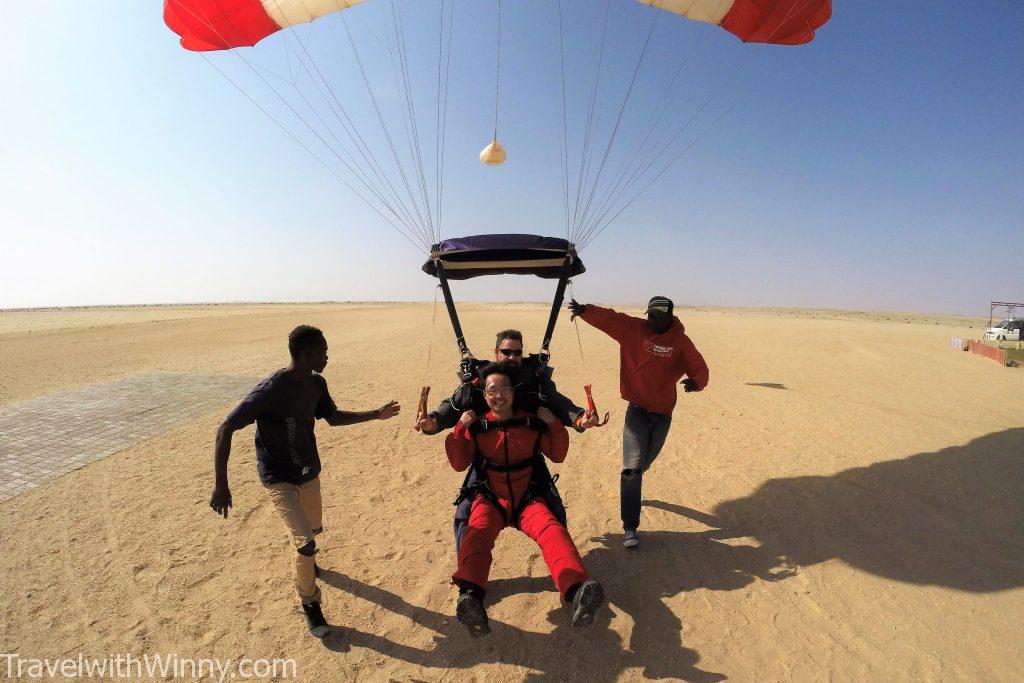 So glad to be on the ground again after my skydive!

Swakopmund may be known to be the cheapest place to skydive in the world, but they don’t discount on safety and the fun. I would highly recommend this desert skydiving experience if you ever had a chance to visit Namibia! Don’t forget to watch the video to see how good the footages are! Ps. If you are travelling onwards to South Africa, do not miss out the highest bungee bridge jump in the world at Bloukrans Bridge!

Skydiving in Swakopmund Video!!! The Best!!!