Porto is the second-largest city in Portugal and is becoming a popular tourist destination in recent years.  Porto is a beautiful city, featuring buildings with red-coloured tiled roofs built on a gentle slope, overlooking the Douro river. UNESCO listed the old town of Porto as a world heritage site in 1996. Porto is one of the cheapest European cities to visit and still have great food and great views. No wonder it was elected best European destination in 2012, 2014 and 2017. 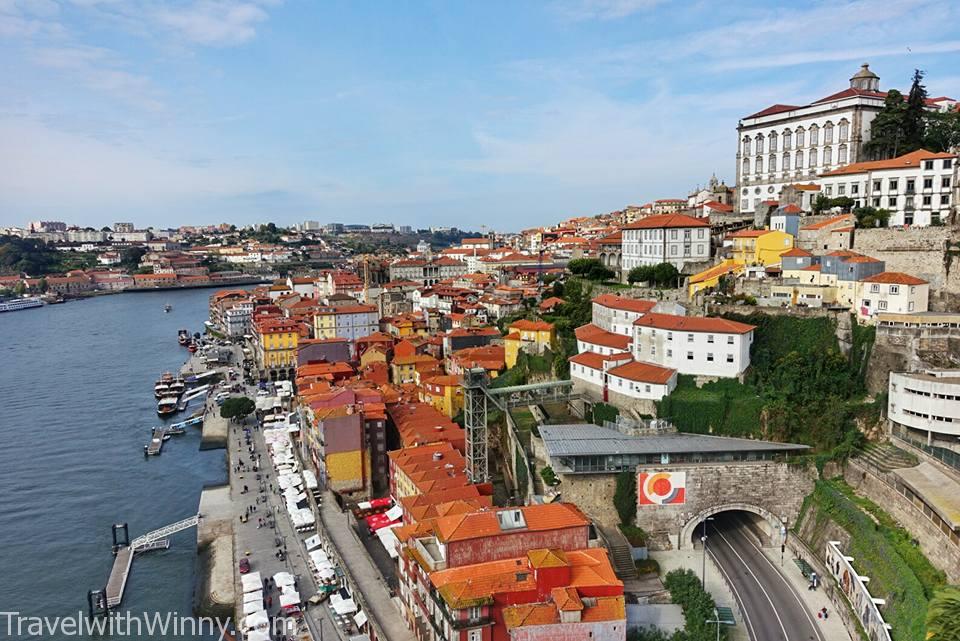 Porto is the second-largest city in Portugal and the tourism in this city is steadily increasing in the last two years.

Porto is famous for one of Portugal’s exports, Port wine and there are many beautiful cellars that are worth visiting in the Vila Nova de Gaia area. JK Rowling- the author of Harry Potter, lived in Porto for 18 months just before she published the first book in the series. At that time she was teaching English during the day and spent most of the night creating the story of the wizard boy in a café called Majestic Café. Like Café Tortoni we visited in Buenos Aires, Majestic Café is also listed as the top 10 most beautiful cafes in the world. For that reason, Porto is an important city for many Harry Potter fans. 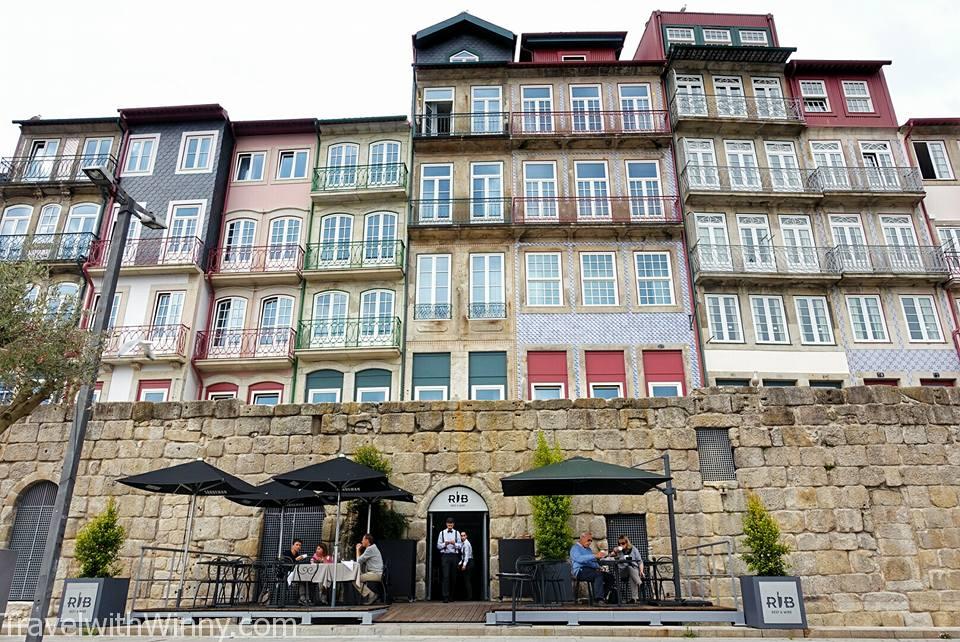 The old town of Porto is listed as World Heritage. It is full of tastefully designed old buildings.

Porto is a very relaxing city to walk around. If you are here to tick Porto off your travel list, the city could be visited in just one day. There are quite a few famous Port cellars, churches and cathedrals in the city, however, the considerable amount of abandoned buildings in the city centre is what makes this city truly unique. 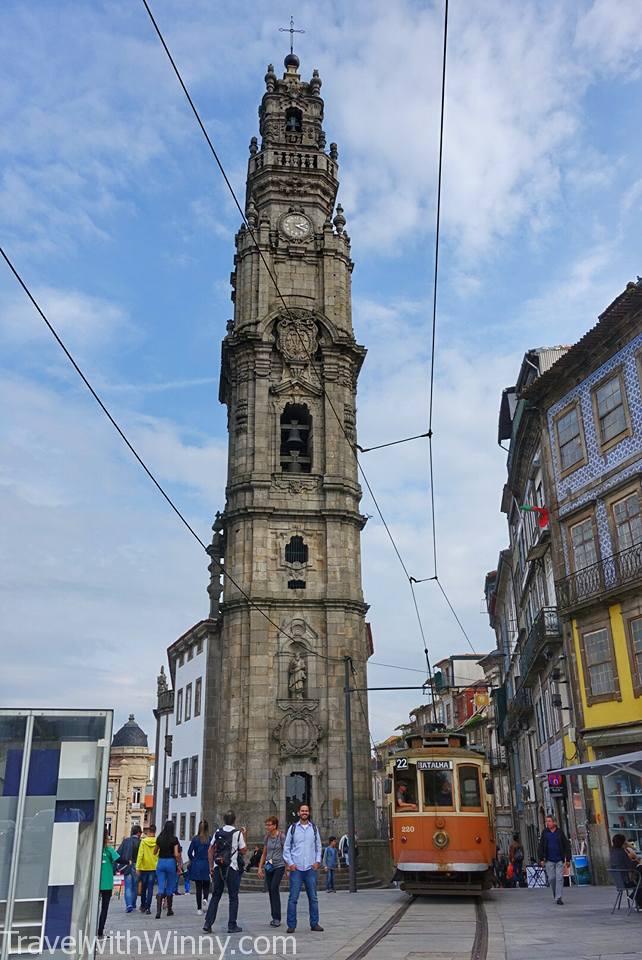 An old church with an old tram in Porto. A classic spot to take a picture in Porto.

What caused our obsession of these abandoned houses?

We didn’t know about these abandon buildings before we arrived here but we became extremely obsessed to know what has caused so many buildings to be abandoned in the city. These abandoned houses were everywhere and many of them were around the city centre where we would consider as prime real estate. We thought the second largest city in Portugal would be bustling and prosperous. Instead, we found it to be full of empty houses left in shambles. The government and tourism industry of Portugal had painted a picture of Porto quite differently to the one we actually saw. There are definitely beautiful parts of Porto that are worthy of mention, but I just want to focus on this different side of Porto that we didn’t know about until we visited! 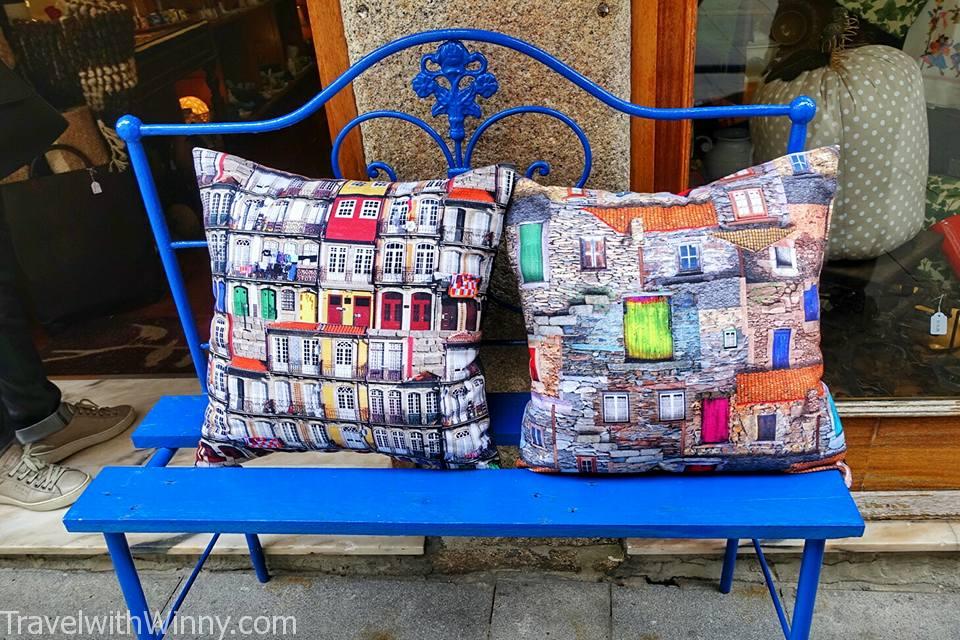 Porto is very beautiful just like the prints on these two pillows. 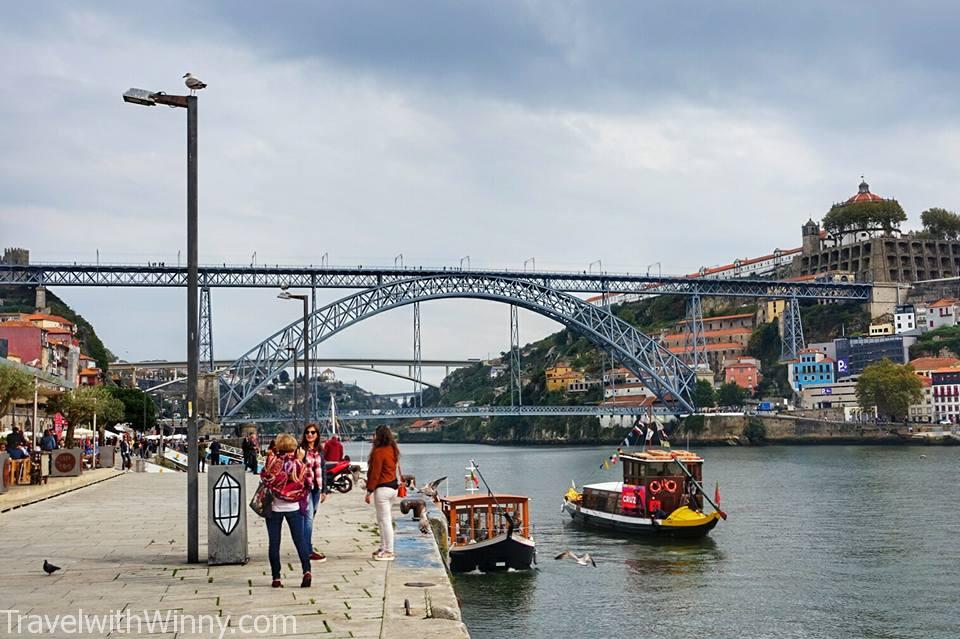 Ponte Luís I was completed in 1886. It stretches across the Douro river at a total length of 172 meters. At that time it was the world’s longest river!

Although our Airbnb was quite nice and refurbished, the accommodation was located next to an abandoned mansion. We could look straight into the abandoned block from our accommodation. The mansion is surrounded by overgrown vegetation and many of the mansion’s windows and tiles were shattered. The place simply looked haunted. This was our first encounter with an abandoned building in Porto. We soon found out that there were many more abandoned buildings like this as we explored Porto. 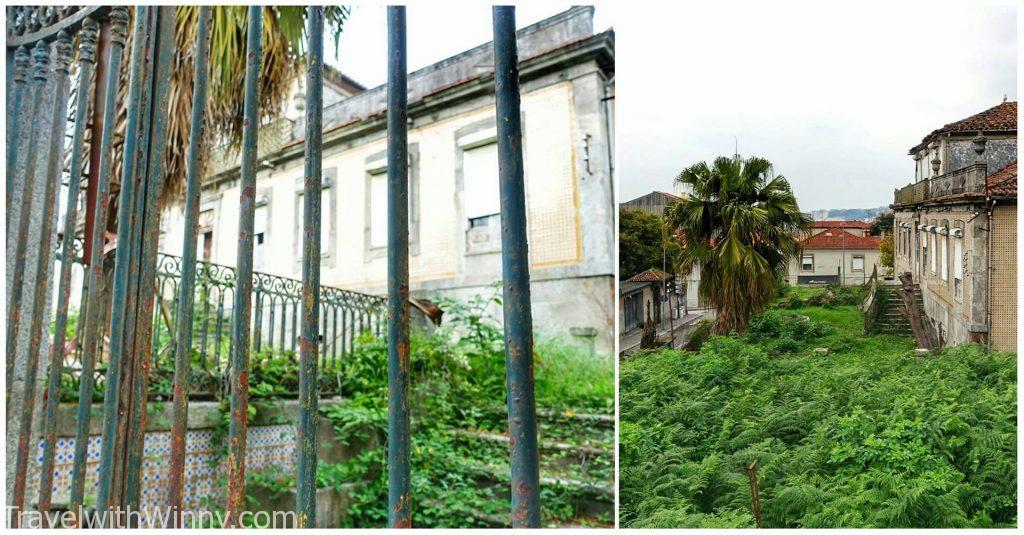 The abandoned mansion next to our Airbnb was quite scary to walk past at night time.

When we crossed Ponte de Dom Luís I Bridge for the first time, we saw a spectacular carpet of vines growing over a huge patch of abandoned buildings directly under the bridge. It was really beautiful in its own way and we haven’t seen anything like this in the city centre. The vines were sprouting purple coloured flowers at this time of the year. 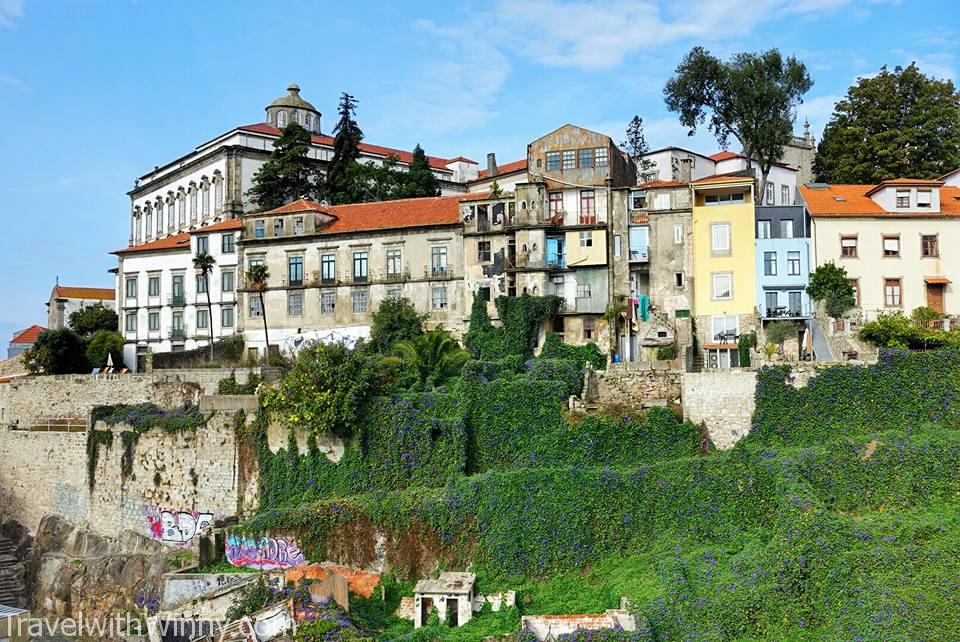 The view of the carpet of vines on the Ponte Luís I Bridge! it was truly beautiful! 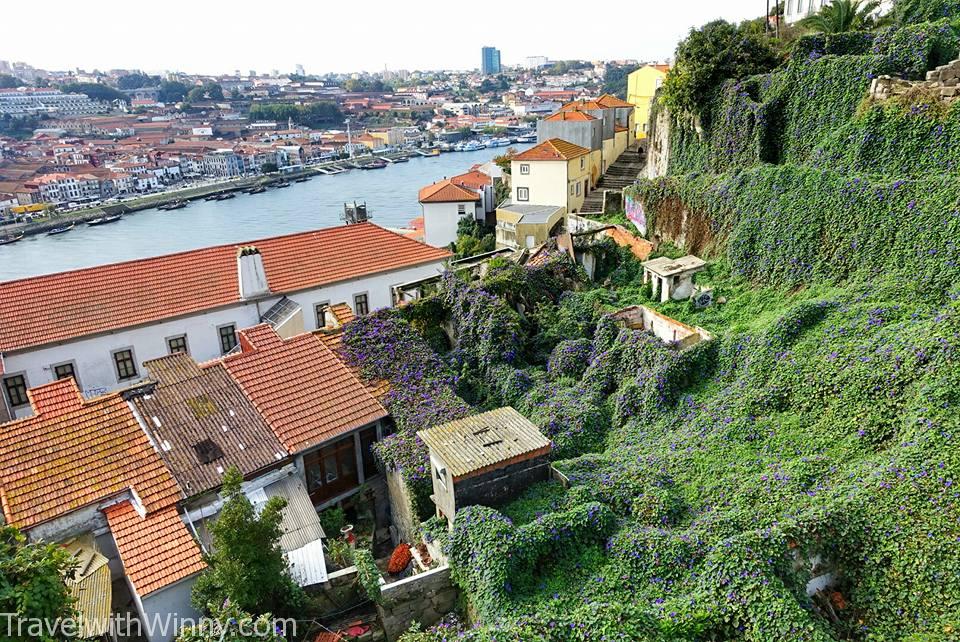 After initial shock, we began to wonder what happened to these abandoned buildings.

We were instantly in love with this view, but this view sparked so many questions in our heads. Why there were so many abandoned buildings at such a prime location of the second-largest city of Portugal? It’s like… you would definitely not expect to see anything abandoned like this around Sydney Harbour Bridge in Australia. 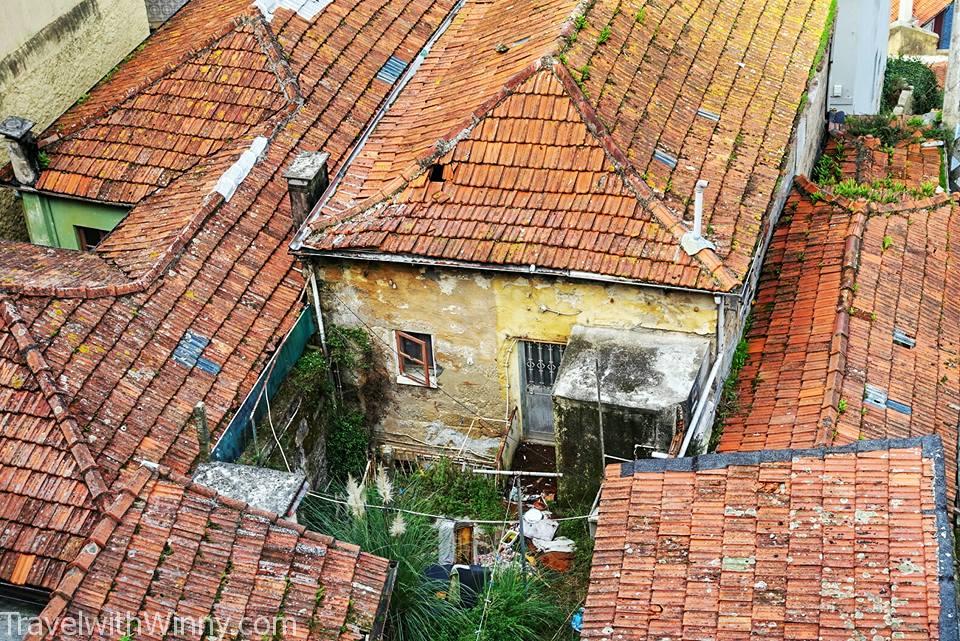 Zooming into the courtyard of a house. The place almost looks like a ghost town.

Why all the abandoned buildings?

During the Global financial crisis, the world focused on the bankruptcy of Greece. Most of us didn’t realize that Portugal was also going through a difficult period. In 2011, Portugal received a bailout from the EU to prevent bankruptcy. This alone does not explain the mass abandoning of houses. When we visited Athens in Greece in 2015, we did not remember seeing abandoned houses in the city, although we did saw a crazy amount of graffiti. 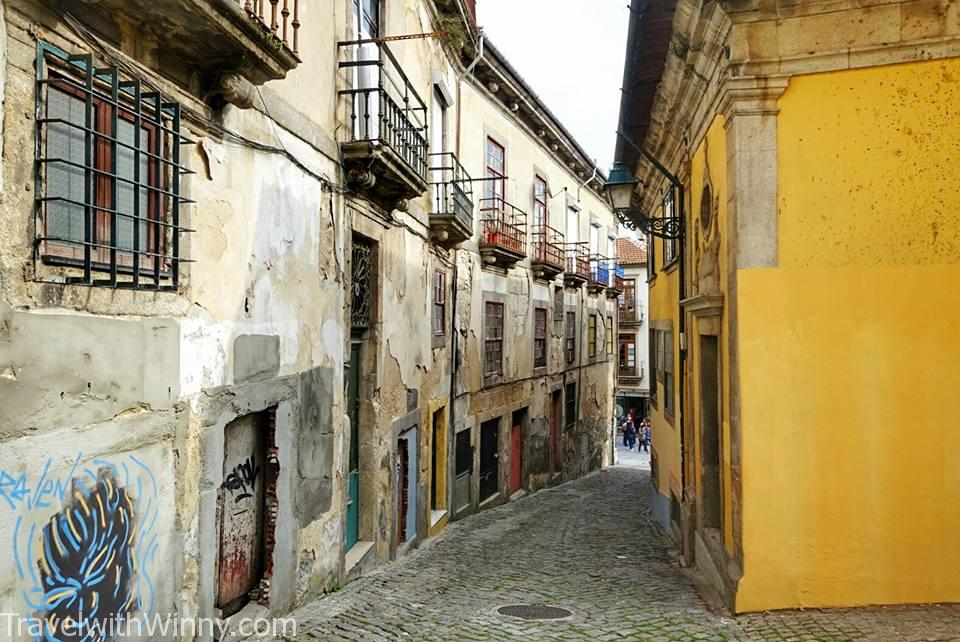 Once you leave the main streets in Porto, you can see many of these abandoned buildings. This was taken at one of the side streets just off the main road.

In the early 20th Century, the Portuguese government introduced a law to protect the poor. This law makes the raise of rent impossible and the landlords cannot evict their tenets either. This is good for the tenets in the city as they could live in the centre cheaply. In some cases, tenants were paying only 20 Euros a month in rent living in the city centre. Since the landlords are not getting enough rent for their investments, they are not incentivised to fix or renovate their properties. Many of these properties were simply left to rot. Hence we saw tenants living in houses that are in terrible condition when we were walking around Porto city. 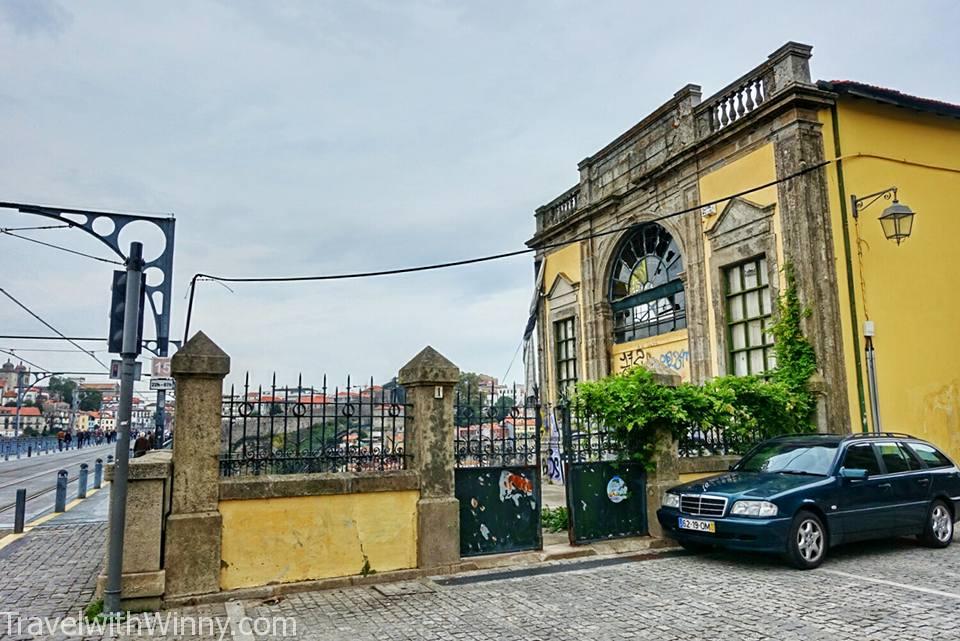 Even this building at one side of Ponte Luís I bridge was abandoned. The building has a great view and would be a great location for a high-class restaurant or hotel

There are stubborn building restrictions which prevent the appearances of buildings to be changed dramatically. This is to retain the heritage looks of the building in the city centre. These building restrictions would make any renovations quite costly. Furthermore, the younger generations are preferring to rent or buy houses in the outer suburb. This is because suburban houses are cheaper to rent and buy and the cost of living is cheaper too.  This further worsening the vacancy issue in the city centre. 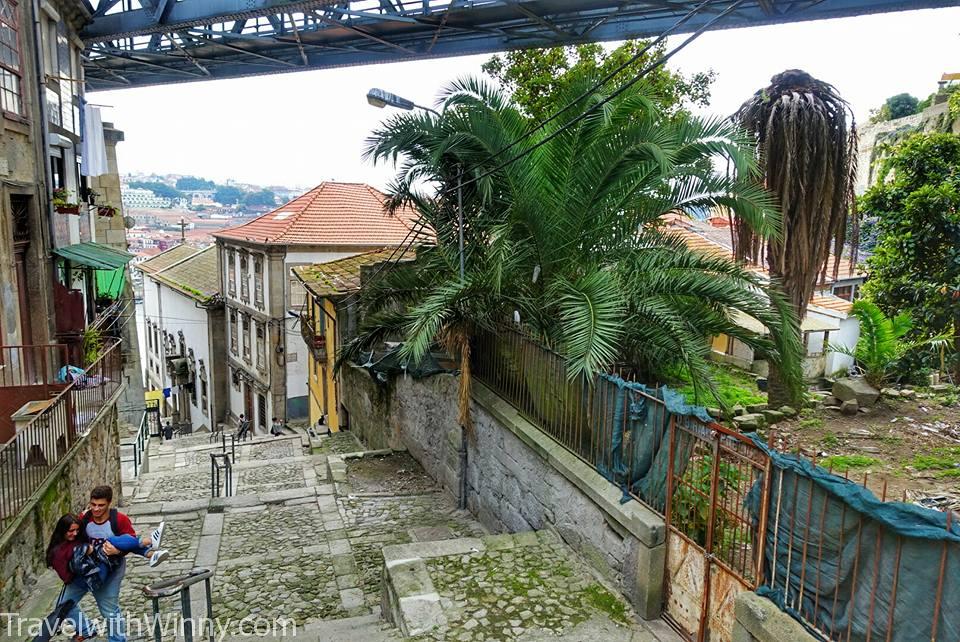 The rumbling sound from the train on top of the bridge was causing a huge racket.

Financial crisis: The final nail in the coffin

Financial crisis then added fuel to the fire. Many companies to become bankrupt in the financial crisis and many Portuguese left Portugal to find jobs in other countries. In 2011, around 18.8% of the houses in Porto were abandoned. That means 1 in 5 houses were empty! Even Lisbon, capital of Portugal, had around 15% of houses in the city being abandoned. The main reason for people to abandon their houses and investments is that even if they want to sell their houses, they couldn’t. Not many people had that extra cash to buy these properties at that time and there weren’t many foreign investors willing to invest. Investors are also not interested in buying houses that cost a fortune to renovate. As a result, more and more buildings were left abandoned. 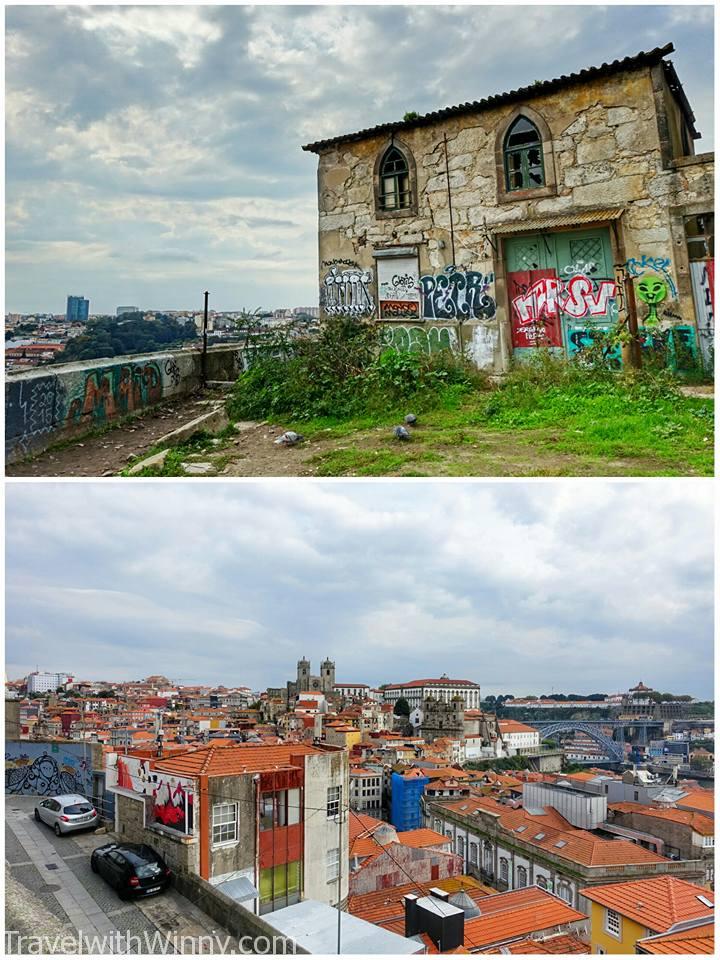 The front yard of this abandoned building serves as one of the best touristic viewpoints in the old town. 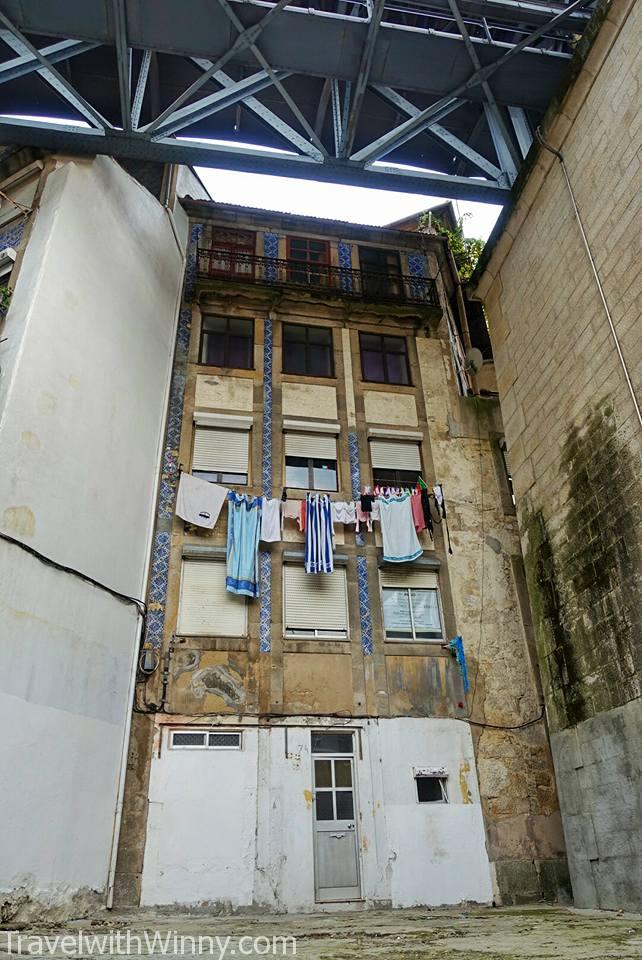 The cheap rents kept some families staying in these houses which are literally crumbling to pieces under the bridge.

When most of the surrounding building is in shambles, many locals would choose to move away. The only people remaining in the area are tenets who are living off their cheap rents. As mentioned before, landlords are leaving these houses in ruins and we saw many families living in these ruined houses. The row of houses underneath the Ponte Luís I bridge left us the strongest impression because we actually saw some people living in these shambles. Some of the houses still retain their facades, but it is only an empty shell. 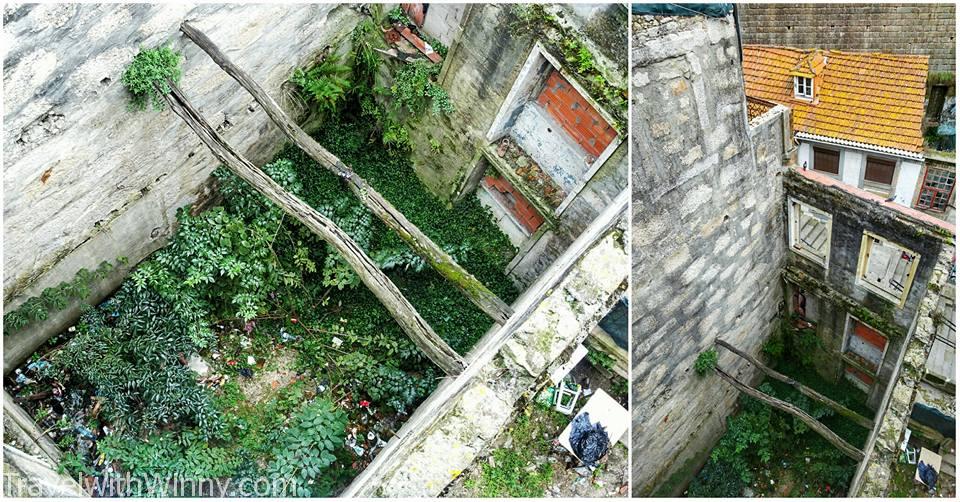 Some of the houses are just empty shell which seems normal when we walked in front of them but quite horrific when seen from the top.

As we walked around looking at these extremely poorly maintained houses, we saw many of them occupied. In parts of Porto, We felt like we were walking in an apocalyptic movie set based in Europe. It is hard to grasp the idea that we were walking in the city centre of the second-largest city in Portugal. I believe these buildings would have looked so glorious in the past when Portugal was at the height of its power. 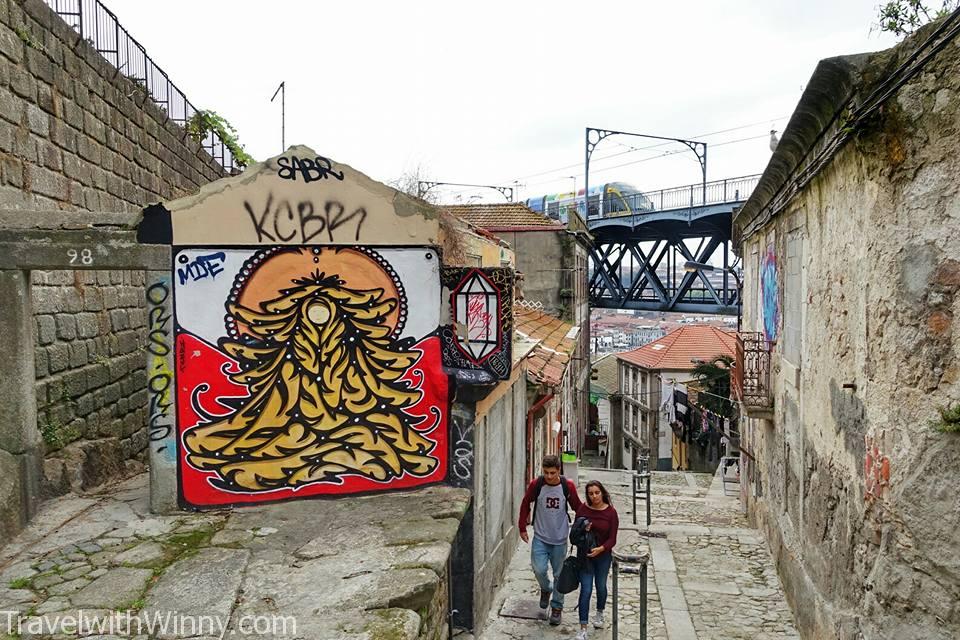 With the lack of tenets and inability to sell these houses, the property owners choose to leave these houses to crumble.

Fortunately, in recent years, budget airline Ryanair began to fly to Porto. The government took advantage of that and began to advertise Porto as a great destination to visit. This helped to increase the volume of tourists visiting the city. The influx of tourists opened up opportunities. Local investors began to see the value of renovating these abandoned buildings as there was a growing demand for apartments and Airbnb for tourists. 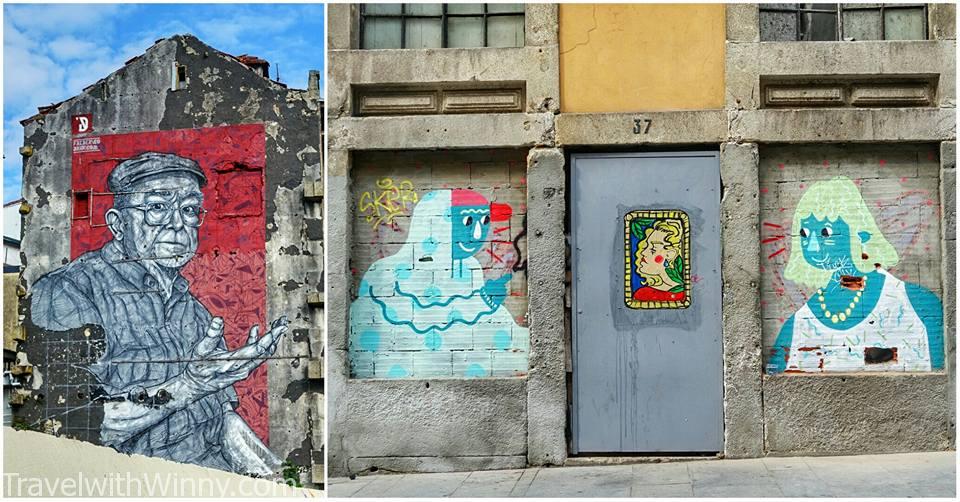 Some of the graffiti on these abandoned buildings are quite tasteful

We are definitely not the first tourists dumbfounded by the mass amount of abandoned buildings. We saw many people asking the same questions online. There is even a company called The Worst Tour which takes tourists to see the “Real Porto”. In this tour, the company takes you to see the abandoned building and allows you to understand the story behind these crumbling bricks and concrete. 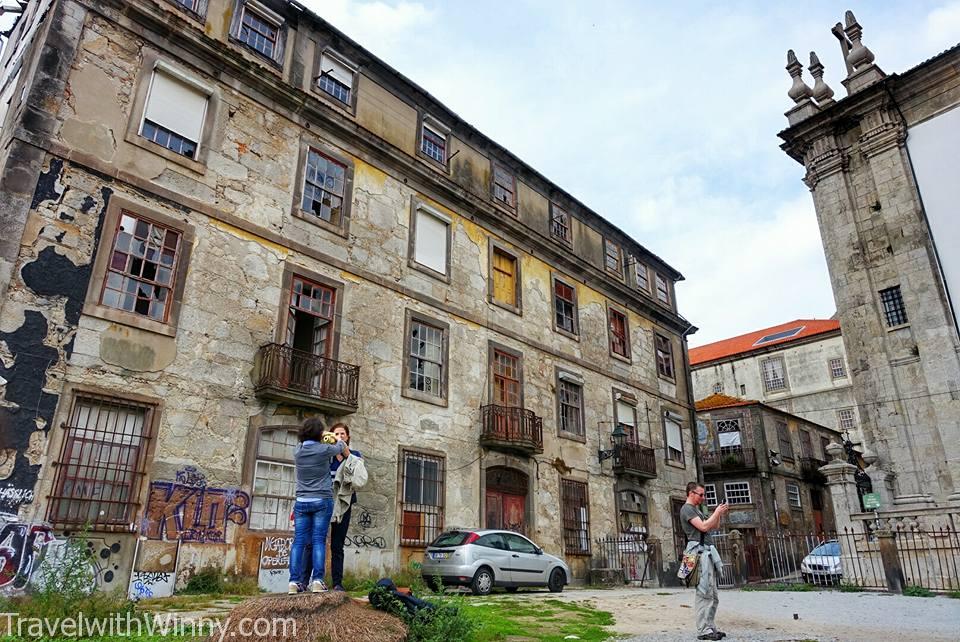 These abandoned buildings were quite fascinating to us.

“The Worst Tour” is not very popular with the Portuguese government as the government is trying very hard to improve the image of this city. The tourism industry wants the world to see Porto as a relaxing beautiful olden harbour city, not a city full of abandoned crumbling buildings. Personally I felt that these buildings are what makes Porto truly unique. Seeing these crumbling buildings in Porto is like seeing the Fevela in Rio, they reflect the history and the culture of the city. 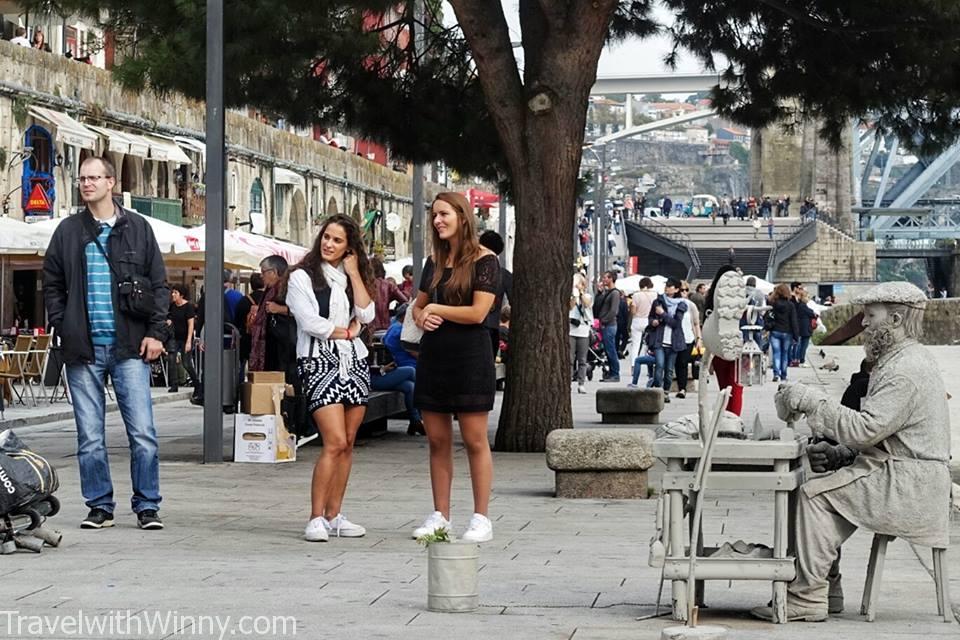 I’m sure Porto will soon see better days. The tourism industry has already picked up in recent years.

Of course, Porto still has it’s beauty and the tourism industry has really picked up in the past two years. The Portuguese government is also reducing the number of new constructions approvals. This forces more locals to fix these old shamble houses to rent or live in. With the tourism industry picking up, there are better jobs available in the city centre and more people are willing to moving back into the city to live. 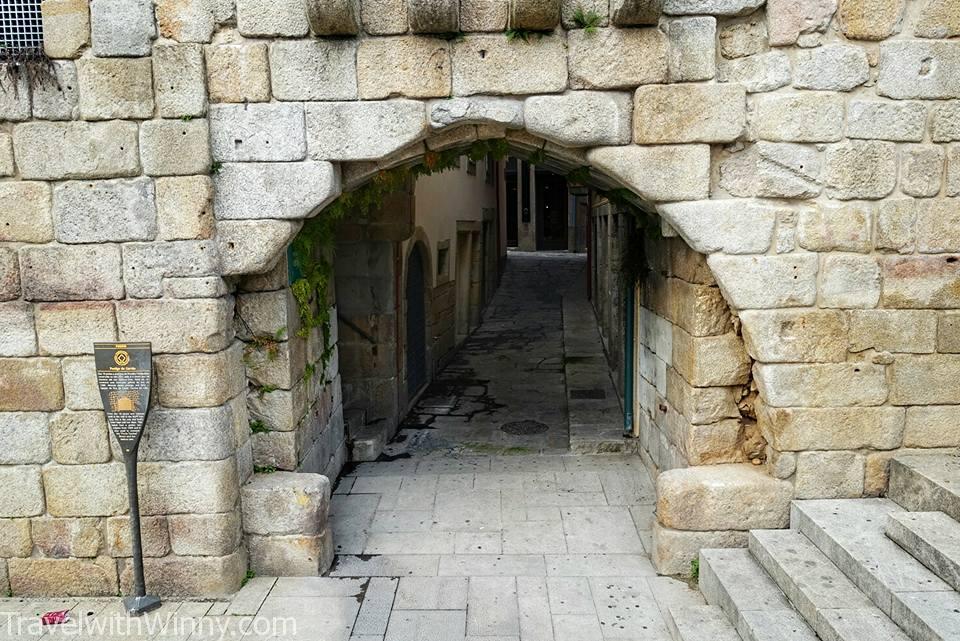 There are many old mysterious alleyways you would love to explore at getting lost in.

We were fascinated with these abandoned buildings and we felt that we had to share what we found out. This article is not meant to be negative. We just want people to look beyond the touristic side of Porto and understand more about this beautiful city. 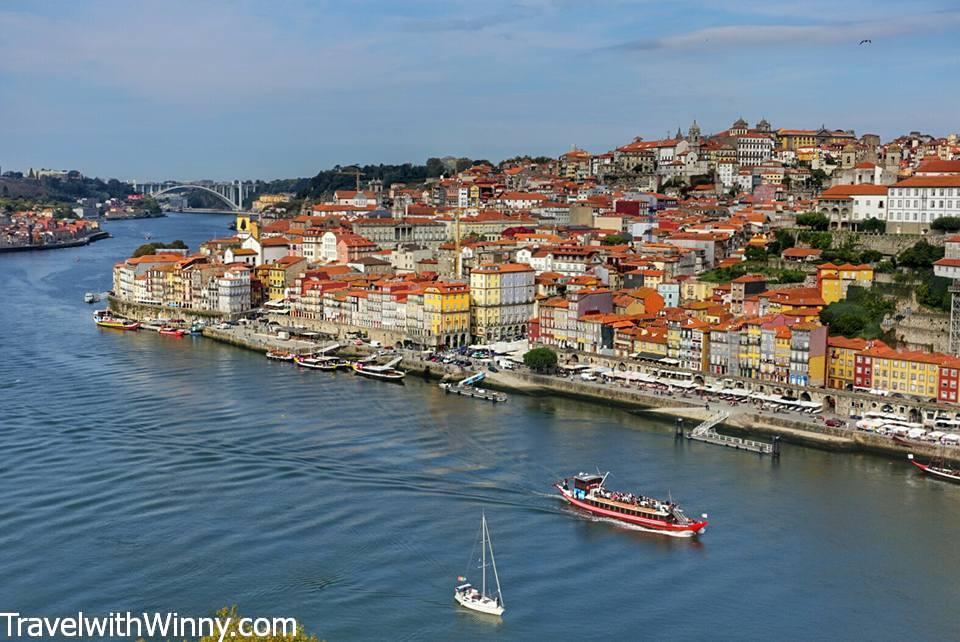 Porto is a truly beautiful city and we loved our stay there! Some places are exactly like the cover in magazines!