When the Soviet invaded the Baltic States in 1940, the red terror of the Soviet secret police (KGB) rained on the capital of Riga. The operation of the KGB in Riga was closely associated with a corner building known as the Corner House. This KGB headquarter is now a symbol of the oppressive regime that governed the Latvian population for 50 years. The last KGB and the last political prisoners had only left this building in 1991. 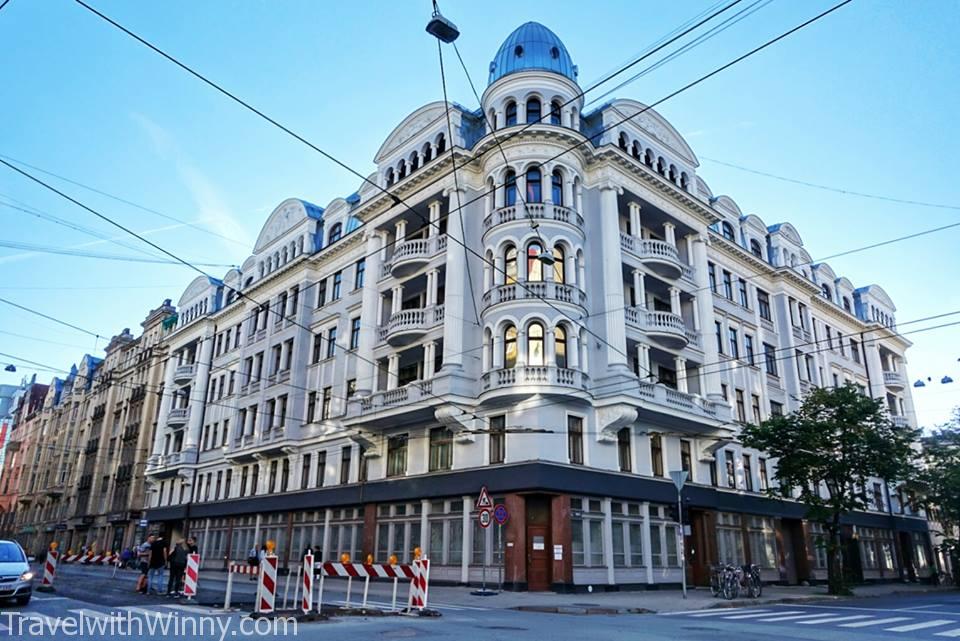 It is hard to imagine when you walk down the streets of Riga, that this beautiful architecture was the infamous “Corner House”

The Corner house is now a museum open to public and there is an exhibition that is free to visit. There is a paid tour that allows us to see the KGB headquarter with a guide. The tours are offered in Latvian and English and the tour times can be viewed on their official website. Most of the building is kept in its original state since the KGB began their operations in 1940. 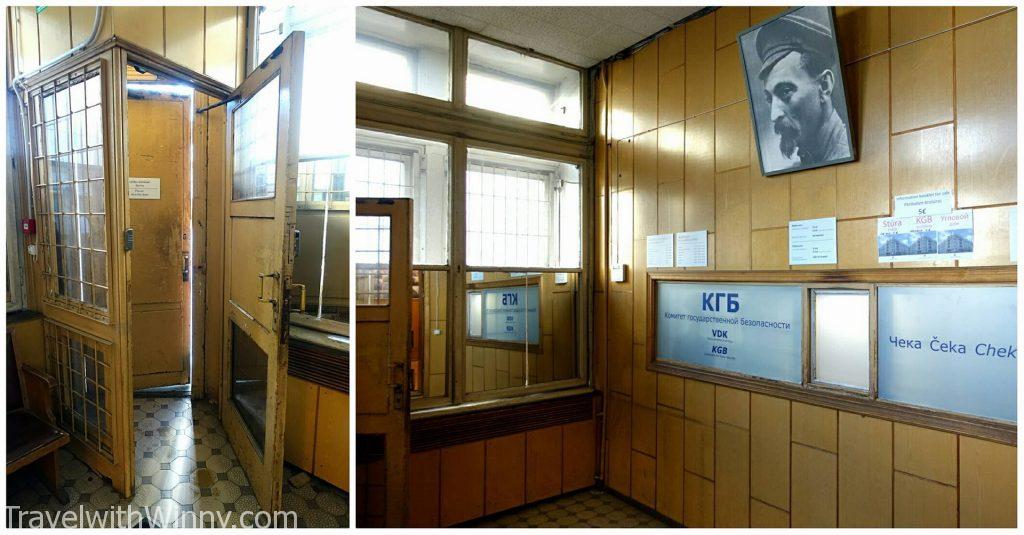 The ground floor of the “Corner house” was used as offices. At the entrance, you can purchase ticket for a tour of the building.

Most parts were only painted over and only a small part of the cells were renovated in 1970. While most of the upper floors of the Corner house were used as officers for the KGB and clerical staff, the basement of this place is an elaborate network of holding cells and interrogation rooms. 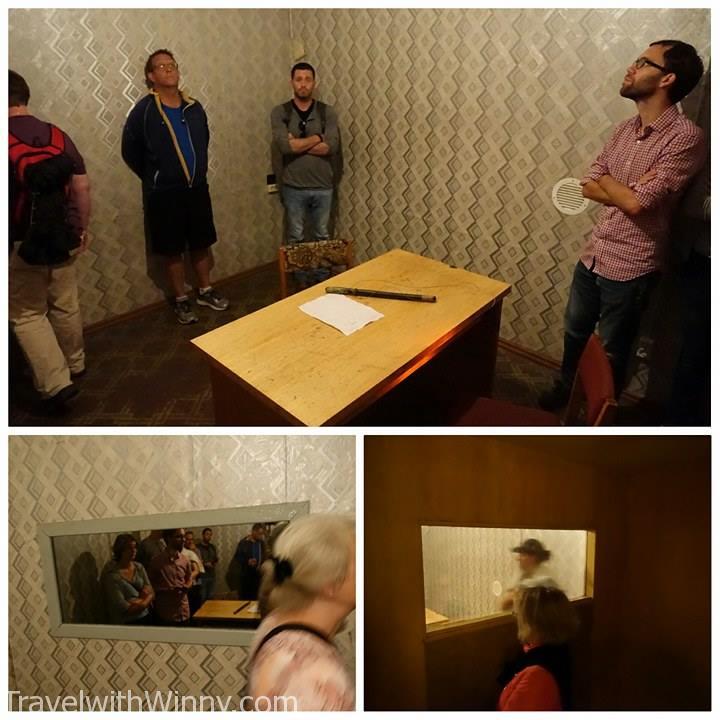 The interrogation room where you would have a KGB officers standing in each corner during interrogation. The spy window was only added later on.

Innocent Latvians were arrested for absurd reason by the paranoid KGB. These reason usually revolve around Contra-Revolutionary Crimes and any suspicions of opposing the communism ideals. Any forward-thinking individuals who does not simply follow orders will find them in the wrong side of the law. 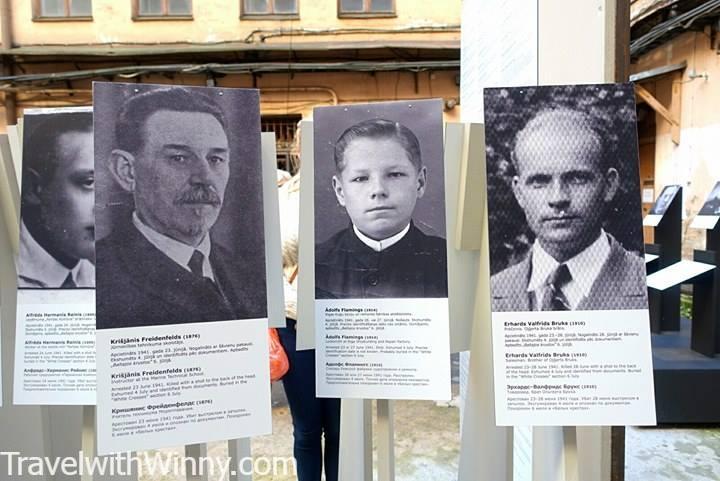 When people are arrested by the KGB, you are immediately found guilty and will not be given any trials. The KGB usually arrest people on the streets and these people will simply disappear after they left home that day. Family members of the disappeared will attempt to find information at the KGB headquarter but they will only be told absurd lies. 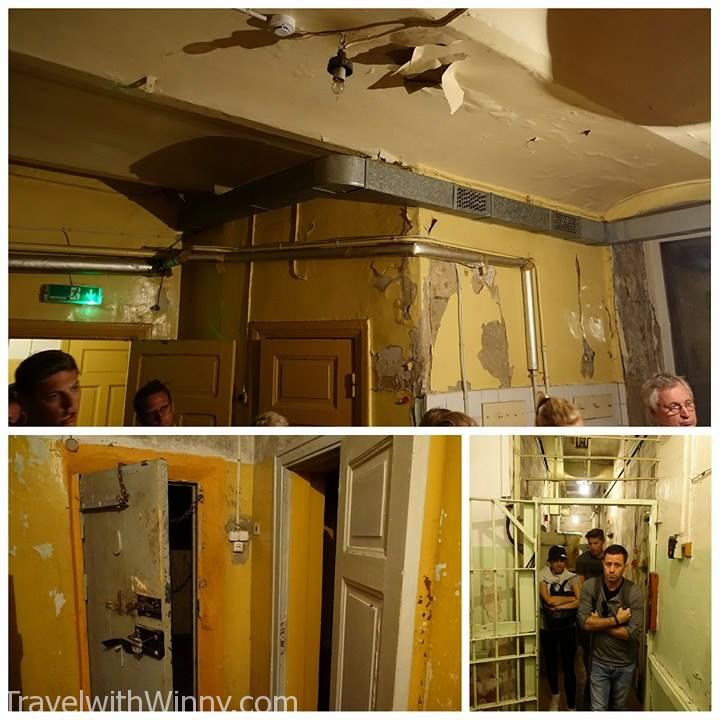 All the paints and holding cells were kept in it’s original form. It’s sad and chilling to walk through all the holding cells.

After the Prisoners were interrogated at the KGB headquarter, they were kept in holding cells designed to hold 4 people but were packed in with more than 30 people per cell. The cells were kept at a constant temperature of above 30 degrees Celsius which drives these people insane with thirst. When the Prisoners first arrived, they were only given underpants and no clothes when they were sent to their cells. Most of them thought they were going for a shower. 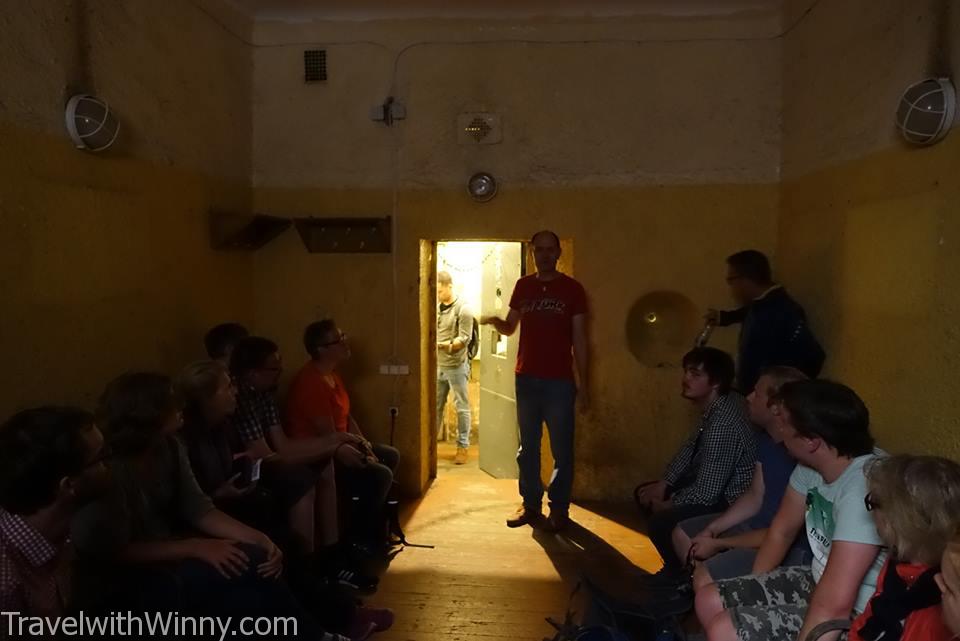 A room like this can hold between 30-40 prisoners and kept at a temperature above 30°C.

The fate of these political prisoner were usually torture, execution or deportation. In June 1941, more than 15,000 people had been deported to various area in Russia, such as Siberia. One month later, the German offences were closing in on Riga and mass executions were carried out for the prisoners who they could to deport. 99 political prisoners were executed in a garage in a muffled room and a motor engine running. They were found buried in a mass grave on site. 70 prisoners were still locked up in their prison cells when the KGB fled. 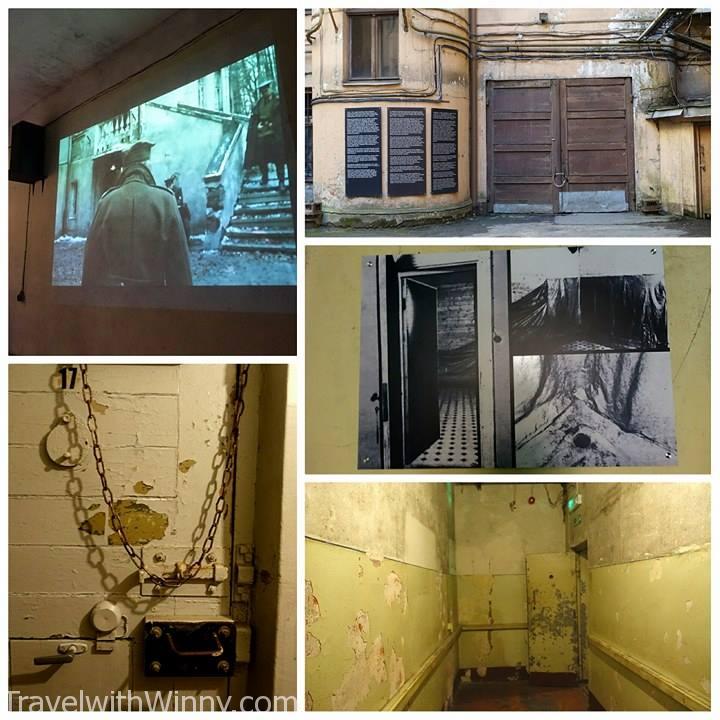 The is the shed which turned into a slaughter house for 99 people before the KGB fled as the Nazis approached RIga.

After the Germans retreated in 1944, the soviet regain control of the Baltic States and KGB Headquarter was once again operational. The KGB quickly reinstated their presence with an iron-fist rule. This time they remained here until the collapse of the Soviet Union and the iron curtain in 1991. 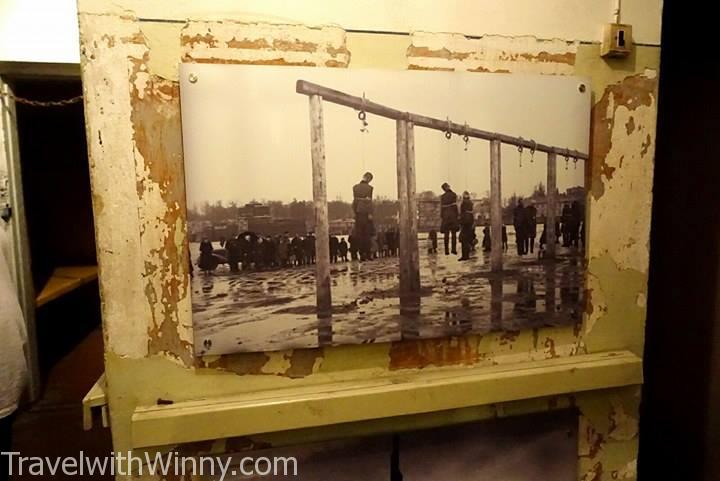 German generals were held here before they were hanged for weeks in public in Riga.

After the death of Stalin in 1953, there were a few changes in the rules in the KGB Headquarter. The prisoners were given 20 minutes of fresh air in the court yard a day. As The Corner House is connected directly to the houses next to it, people outside could climb to the neighboring rooftop to throw letters inside. As the notes would usually ended up in the hands of the wrong group of prisoners, they generally pass on the message by tapping Morse Code on the walls. 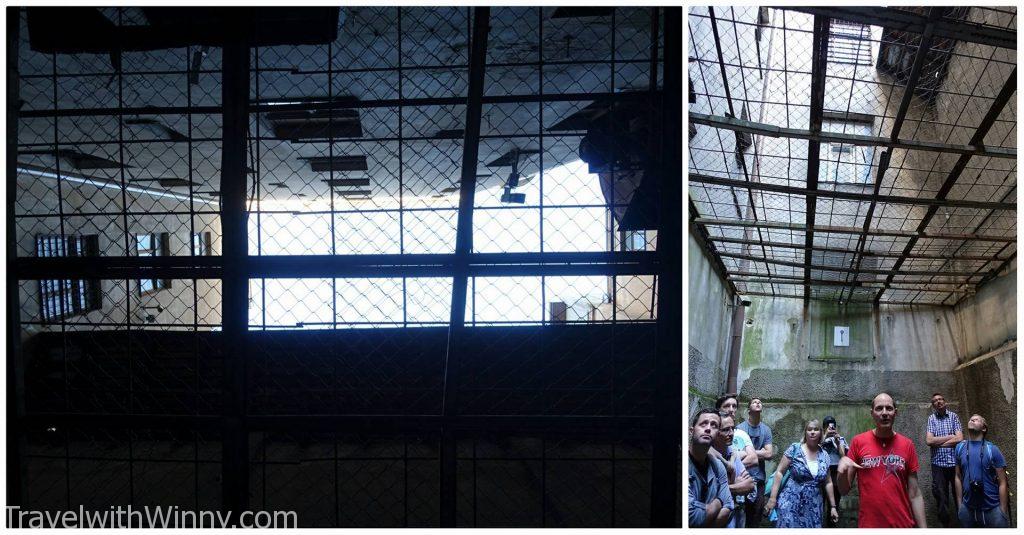 20 minutes a day the prisoners could have access to fresh air. This rule was introduced after Stalin died. They didn’t have the caged ceiling in the past, so message could be thrown down from the top of neighboring buildings.

Our visit to the KGB Headquarter in Riga was a very interesting experience. We were sorry to learn how sad and devastating the history is at this place. KGB Headquarter was only opened for the last two years and the public now have a chance to visit the crypt like cellars and have a glimpse of what life was like behind the Iron Curtain. We also visited Latvia’s Soviet Secret Bunker in the previous blog, please click here if you are interested (link). 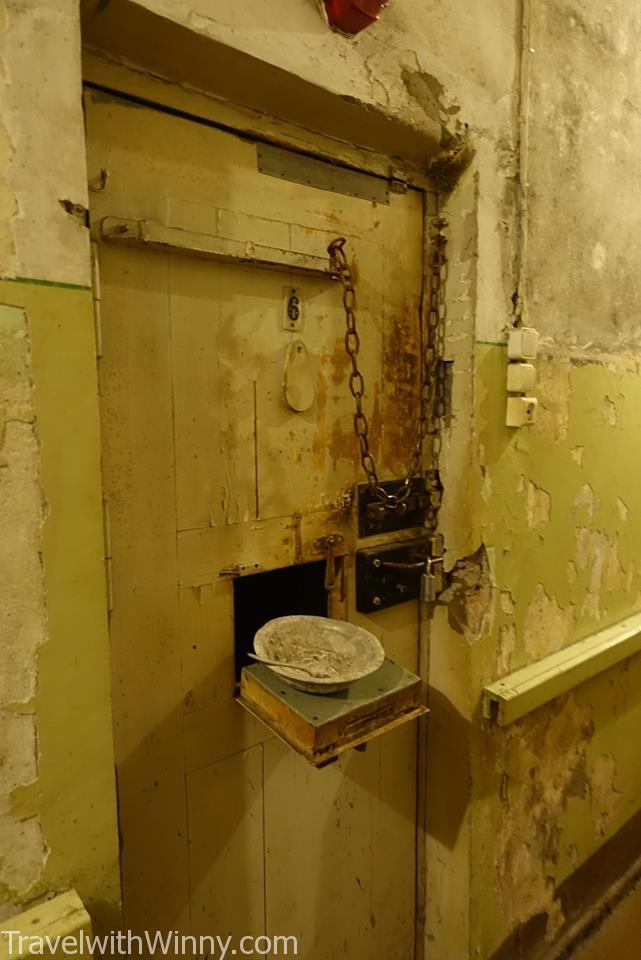 A haunting past for many Latvians. The tour was a very eye opening experience to learn how the KGB operated through these years in Riga.

Even though on the website it says you can book tours online, we could not find any English tours. Best way is to show up at the correct time and purchase the ticket locally.