One of the main reasons why people visit this region of Central Asia is to see the Gates of Hell in Turkmenistan, aka. the Darvaza gas crater! This gas crater is 69 meters in diameter and 30 meters in depth. The fire has been burning continuously for decades! 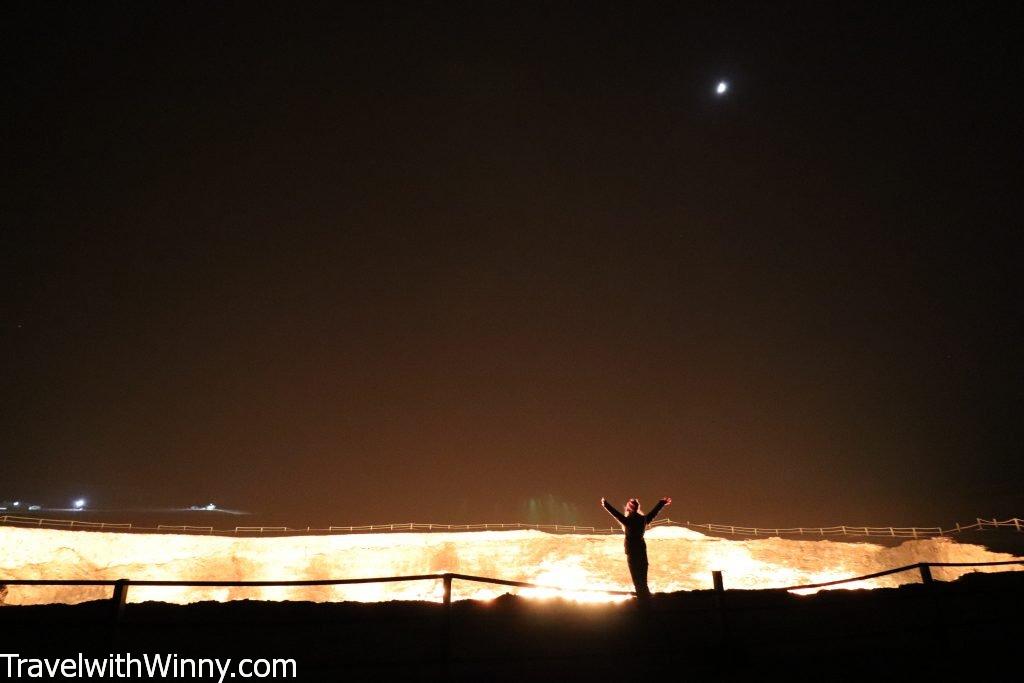 The Darvaza gas crater is like a gateway to hell.

When visiting here at night, the crater looks like an entrance to the underworld. CNN Travel even rated this place as “one of the freakiest places on earth”. No wonder this is one of the top places to visit in Central Asia!

How did it all begin?

The Gate of Hell in Turkmenistan is located in the Karakum Desert, around 270 KM from the country’s capital- Ashgabat or 335 KM south of Dashoguz-the biggest city in the north before entering Uzbekistan. 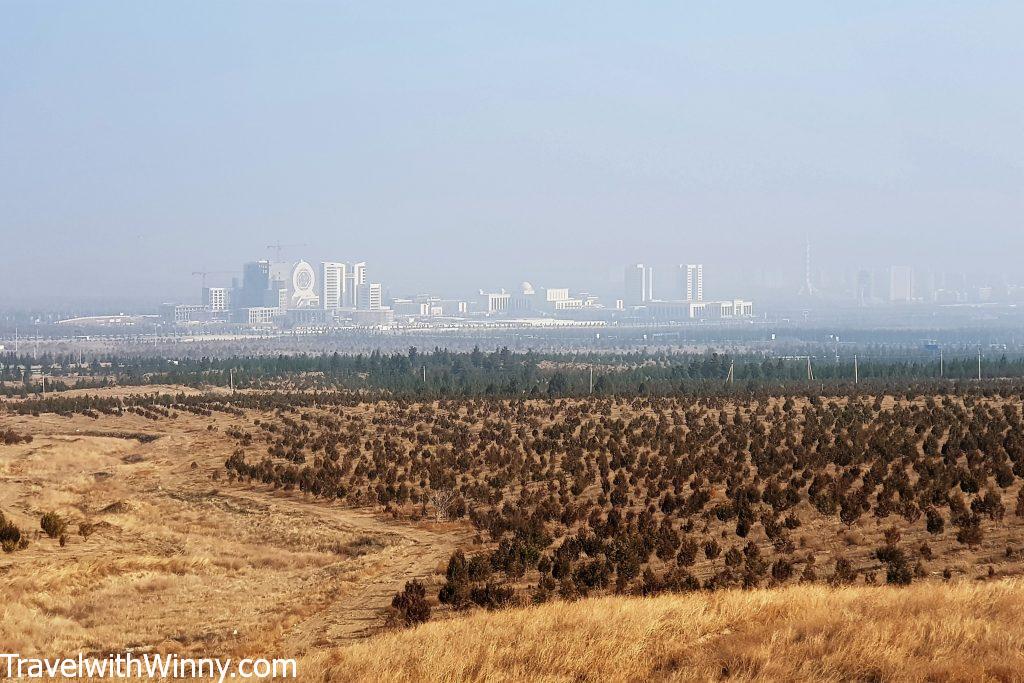 The white capital Ashgabat from afar.

In 1971, a group of Soviet geologist came to the Karakum desert in search of oil fields. They accidentally drilled on top of a natural gas field and caused the whole place to collapse inwards with their equipment! 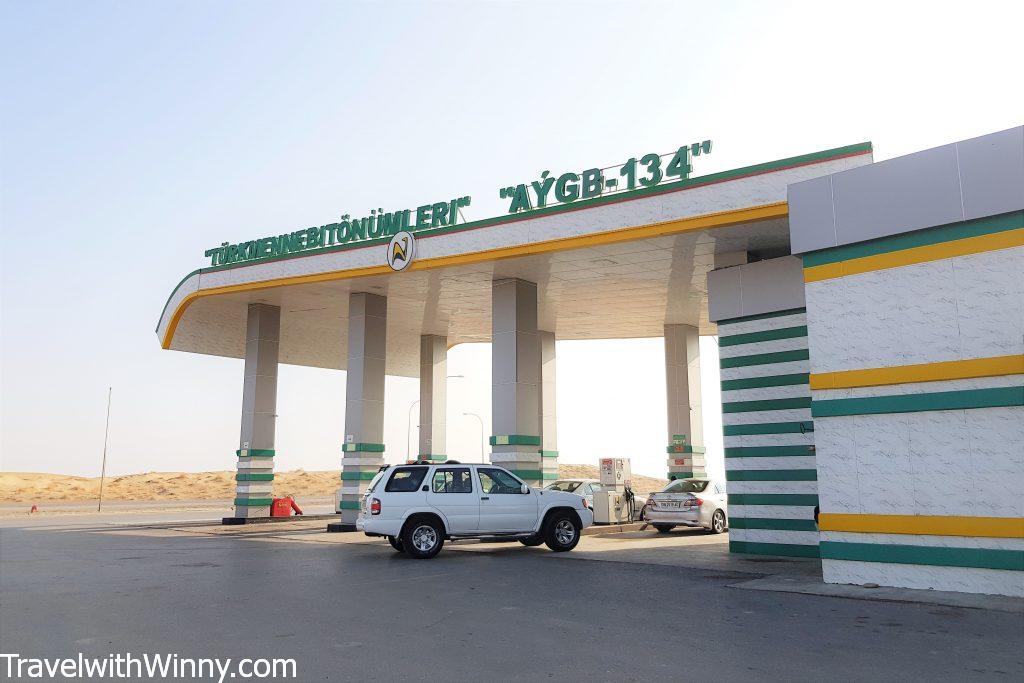 A gas station at Turkmenistan.

The geologists feared that the methane releasing from the newly collapsed gas crater will pollute the air and affect the nearby towns. They strategically set the gas off on fire, hoping it would burn out within a few weeks, however, it has been continuously burning ever since! 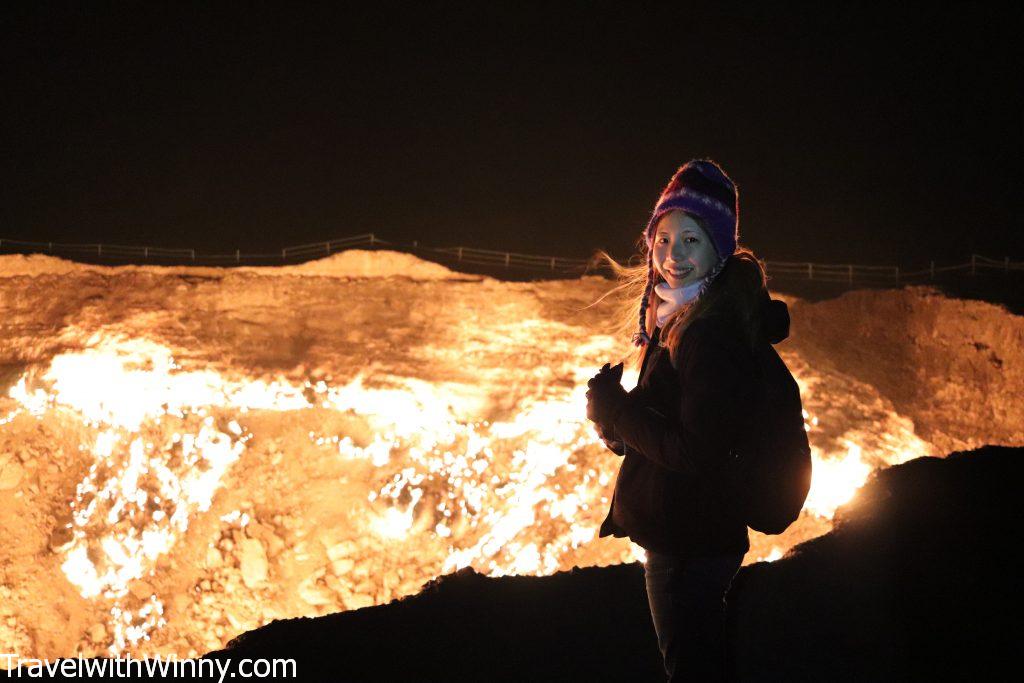 The fire that has been burning since 1971!

In 2010, the president of Turkmenistan ordered the crater to be sealed off. Before this could happen, the president then declared the site as part of a nature reserve in 2013. The spectacular view of the Gates of Hell in Turkmenistan is one of the main reason why tourists visit this country. 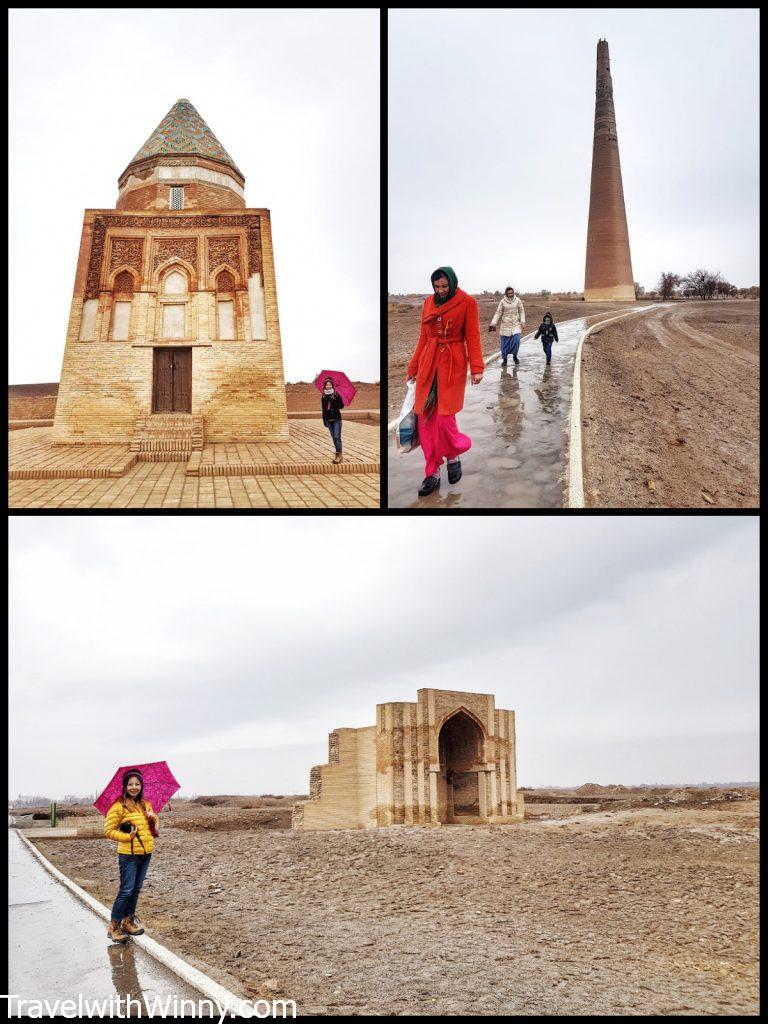 The UNESCO site of Konye-Urgench contains part of the capital of the Achaemenid Empire.

Without this attraction, the number of tourists wanting to visit this country would decrease drastically. Strangely enough, the Turkmen travel industries tend to promote other UNESCO sites such as Marv, Nisa & Konye-Urgench instead of here.

How to visit Darvaza gas crater/ Gates of Hell with public transport?

The best way to visit the Gates of Hell in Turkmenistan is to join a tour operator. However, if you are on a transit visa and is low on budget, you may want to do it on your own. 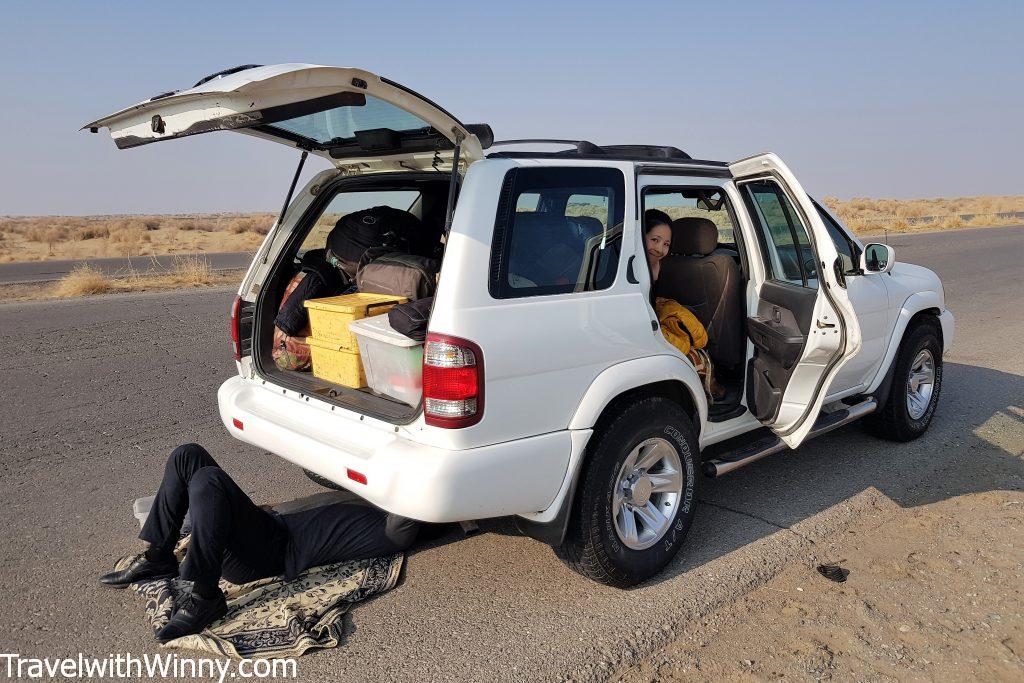 Thankfully our driver is a good mechanic, he was able to fix the car and continue our trip towards Darvaza gas crater in no time.

Depending on the direction you are travelling from, you may be visiting the Darvaza gas crater either from Ashgabat or Dashoguz. Daily buses heading between Ashgabat & Dashoguz passes through Darvaza village. 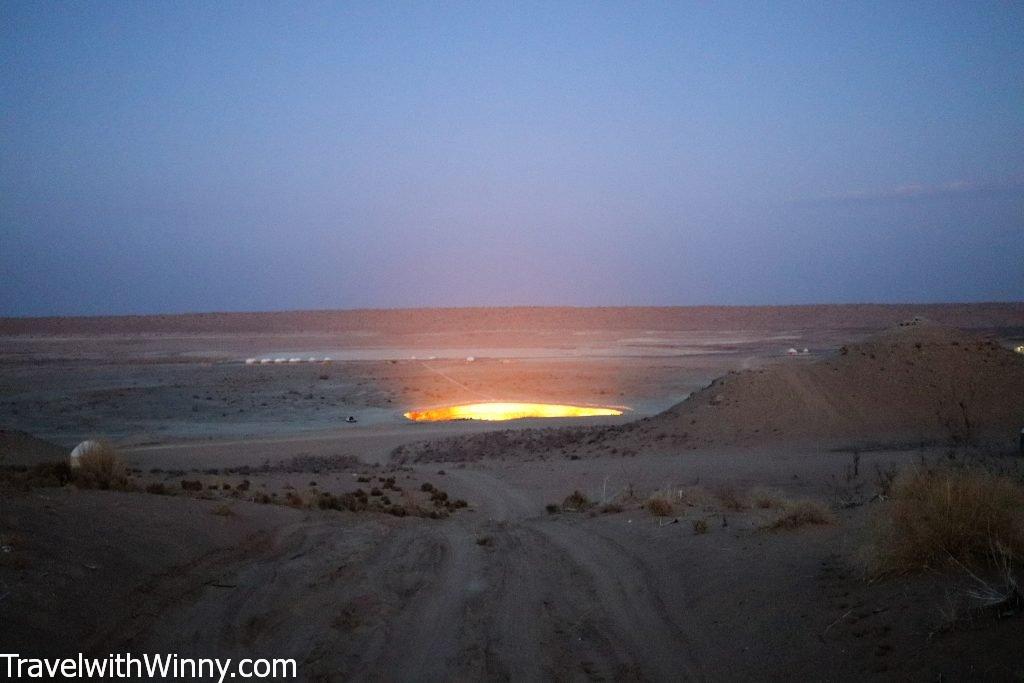 You will have to get off the bus on the highway and walk 7 KM walk to the crater. Expect to pay full price for the bus despite you are getting off halfway. Just beware that if you stay there till dark, it may be hard to walk back to the highway as the desert would be pitch black.

Where to stay when visiting Gates of Hell in Turkmenistan?

There are no proper guesthouses or hotels at the crater, instead, there are yurts owned by various Turkmen travel agencies located near the crater. These yurts are locked up when not in use. Fortunately, camping is free and there are public toilets available for campers. 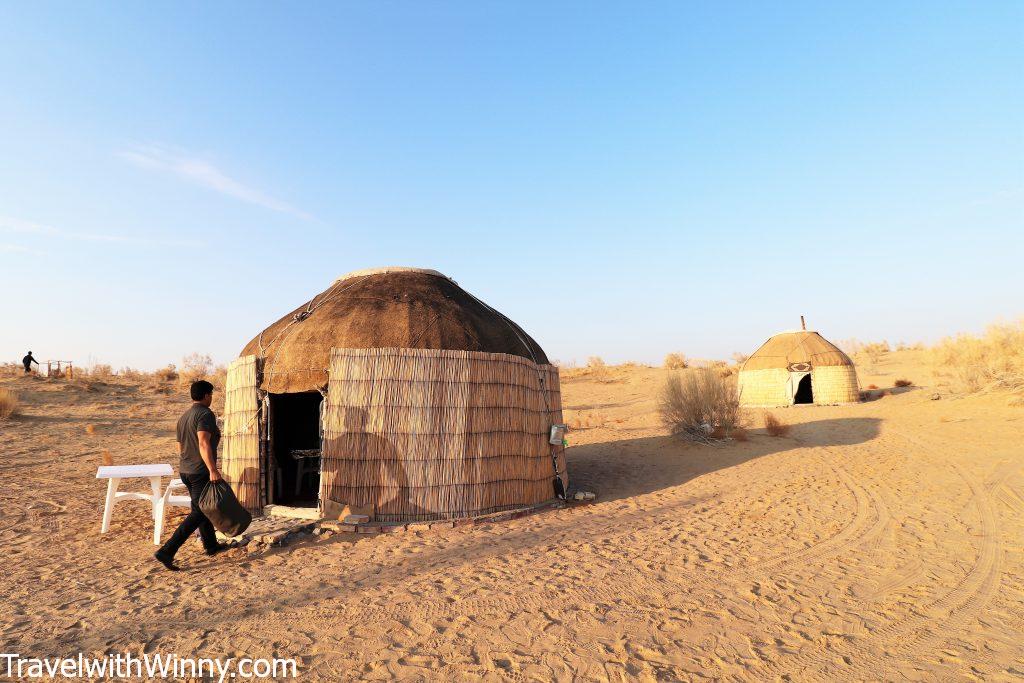 There are a few yurts near the Darvaza gas crater owned by local tourist companies.

Apparently there are some basic homestay options in the Darvaza village. You can ask the owners to drop you off at the crater and pick you up later. According to Unusual Traveler‘s blog, it’s around USD$50 for the transport.

How much did it cost us to visit the Darvaza gas crater? 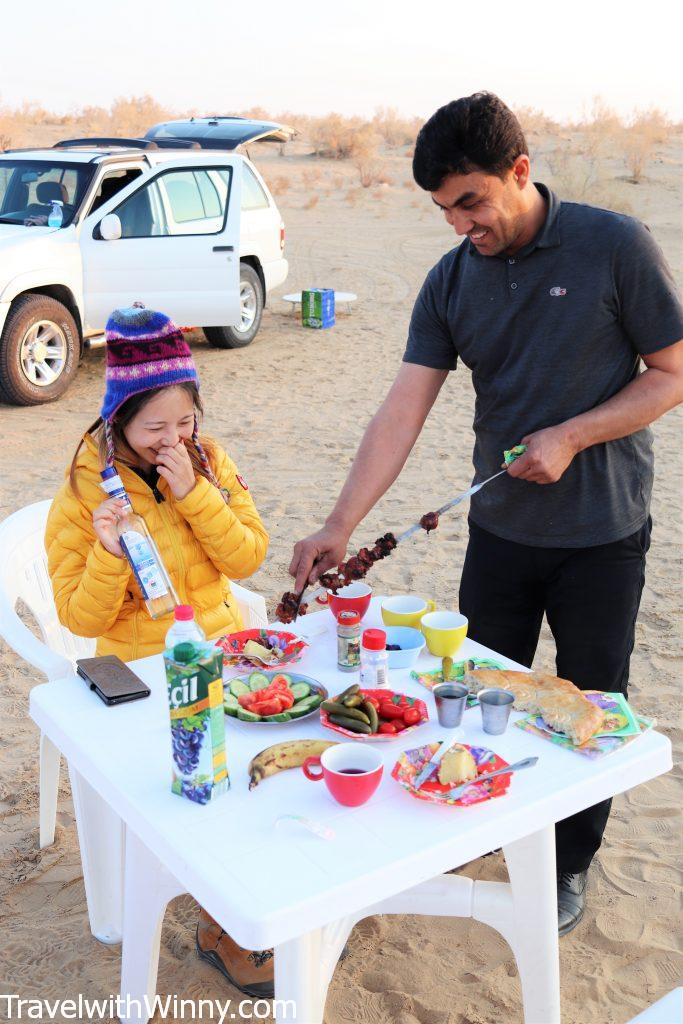 The good thing about joining a tour is that everything is done for you, including food!

Our experience at the Gates of Hell in Turkmenistan

As 70% of Turkmenistan is occupied by the Karakum Desert, the landscape after we left Ashgabat is drastically different from the capital itself. We first went from a “white city” to “green villages”. Our guide told us that green represents the flag of Turkmenistan, so the immediate villages outside of Ashgabat are all painted green. 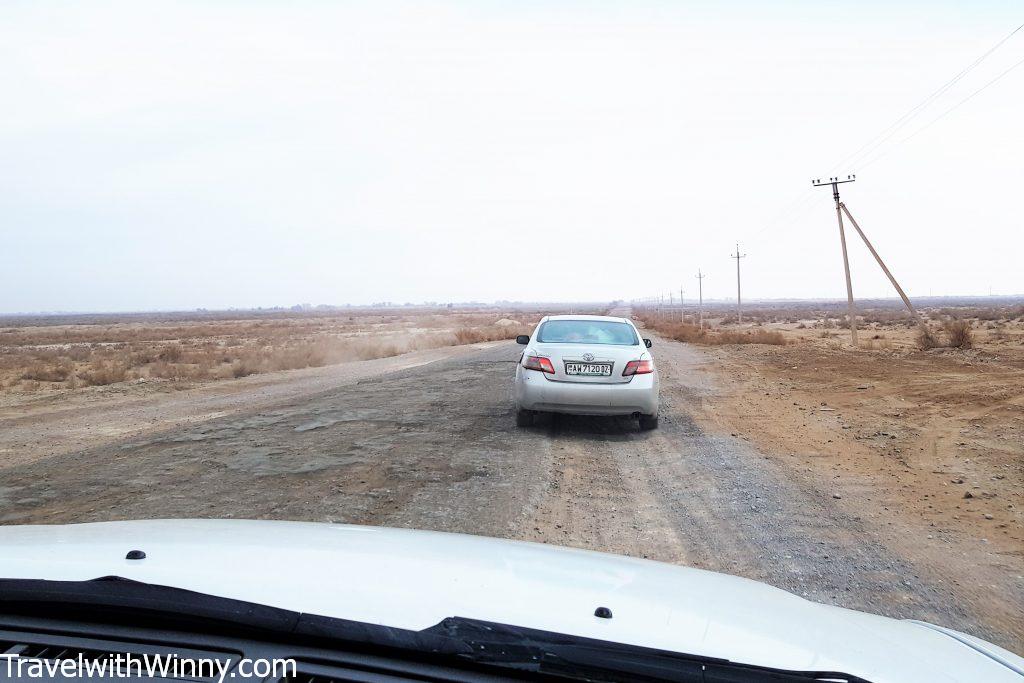 The road condition in Turkmenistan outside Ashgabat.

As we drove further away from Ashgabat, we were surprised by the condition of the roads. The villages were basic, to a point it was comparable to what we saw in Africa. Hard to imagine infrastructures like this when the capital is so futuristic. 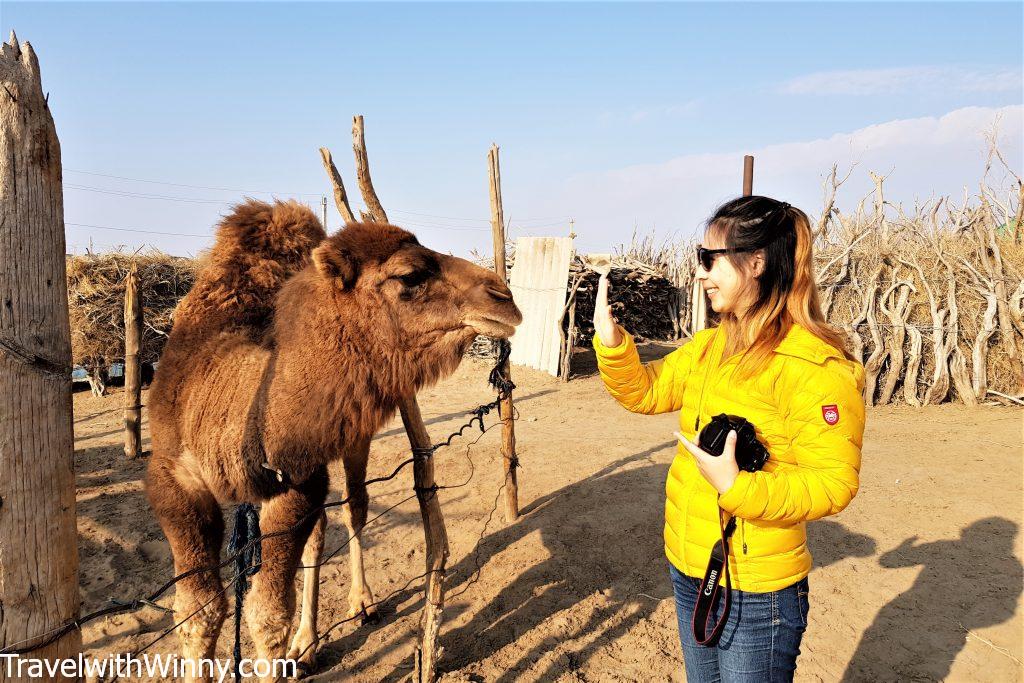 Saying hi to pet camel at a village inside the desert.

5 hours later with our 4 wheel drive covered in dirt, we have arrived at our yurt near the Darvaza gas crater. Our guide did take us to a few smaller gas craters along the way, but they weren’t impressive. Even the Darvaza gas crater itself wasn’t that cool during the day. The true beauty of this place only reveals itself at night time!

Our Yurt near the crater

Our campsite was around 400 meters from the crater, guarded by the man who lives in the nearby village. His job was to set up the yurt, the bed with sleeping bags on top, fire, prepare us food, etc. There was a toilet not too far away from our yurt, however, just like our overnight stay in the Moroccan Sahara desert, we preferred to pee in the wild. 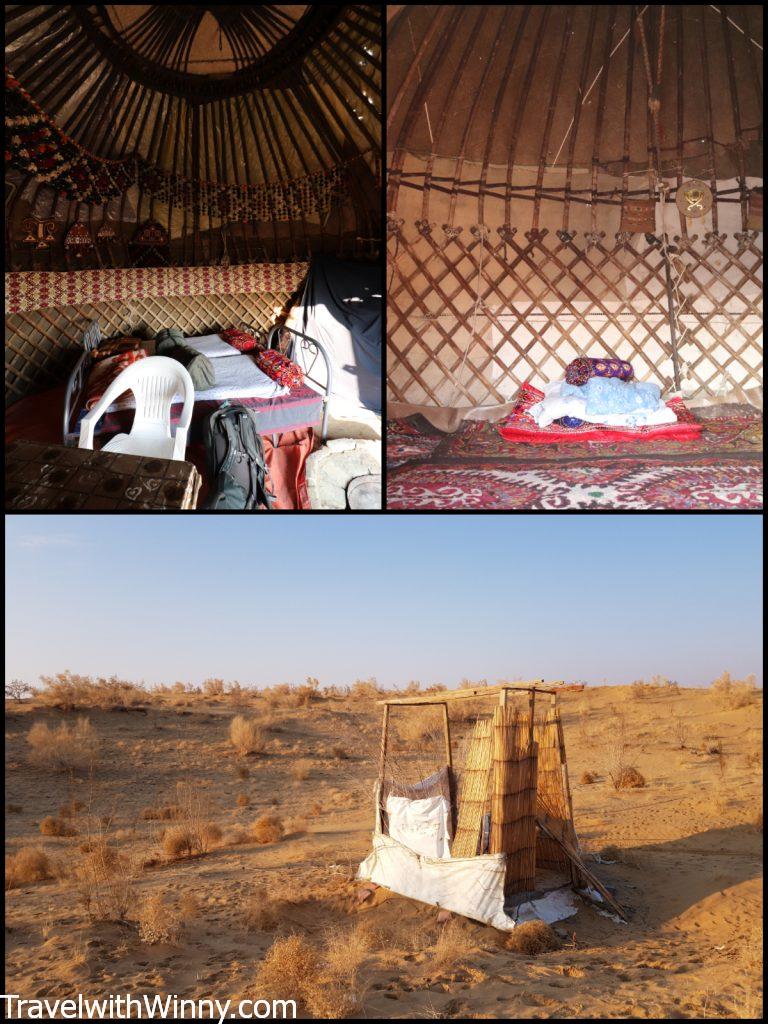 I am sure it’s not hard to guess which yurt is for tourists and which one is for the guide. The toilet is very basic too.

He and our driver stayed in the yurt behind us. Their yurt was more traditional, covered with Turkmen carpet and basic beddings. Ours had a bed, a table and a gas heater set up, it was more touristic for sure. 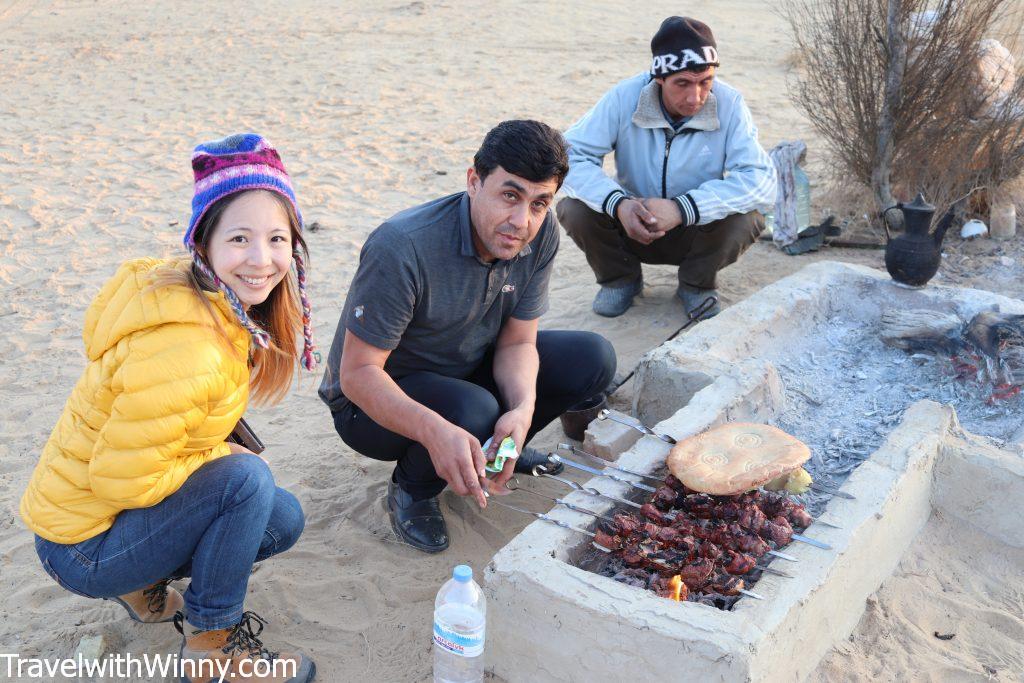 Our driver cooking the lamb Shashliks.

We had lamb shashlik, salads, fresh bread and a bottle of vodka provided by the tour agency for dinner. The food was quite delicious, the meat was marinated nicely. Our driver told us he only started to learn how to cook after taking on this job. 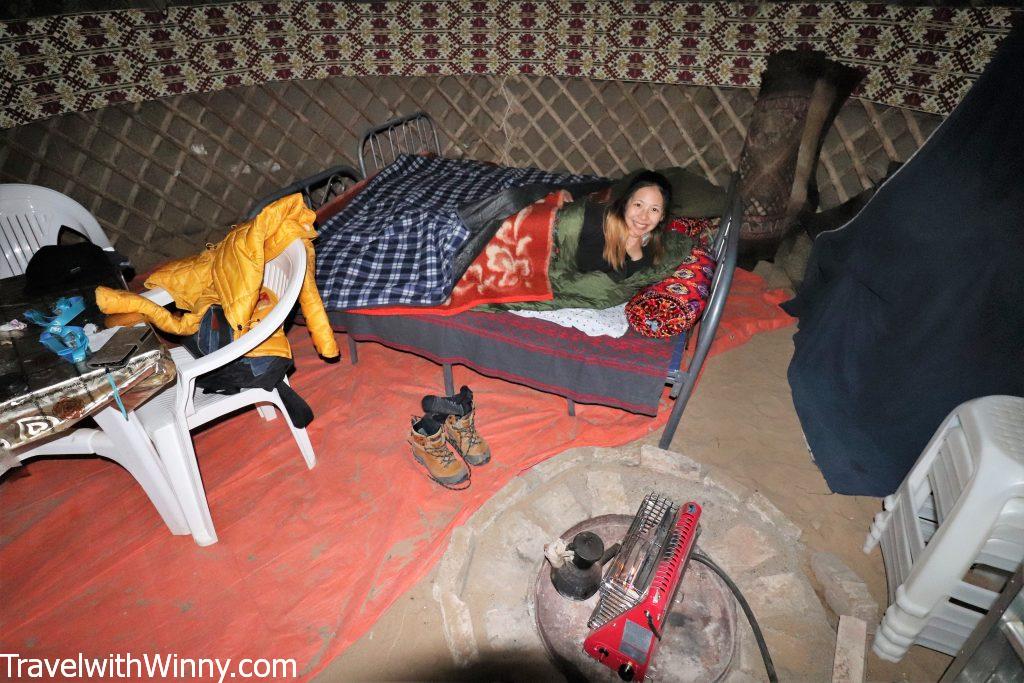 It was quite cold at night, thankfully the sleeping bag we paid extra for (USD$10pp) was warm enough!

The breakfast food was just a load of cookies and bars, which wasn’t particularly healthy. However, after our observation in Central Asia, the breakfasts are usually quite basic, just bread with various types of jams.

The Karakum Desert in January was quite cold, temperatures reaching well below zero. So standing next to the Darvaza gas crater was like standing next to a giant gas heater! The glow of the fires was mesmerizing, no wonder they had to put up a fence in case people accidentally fall down. 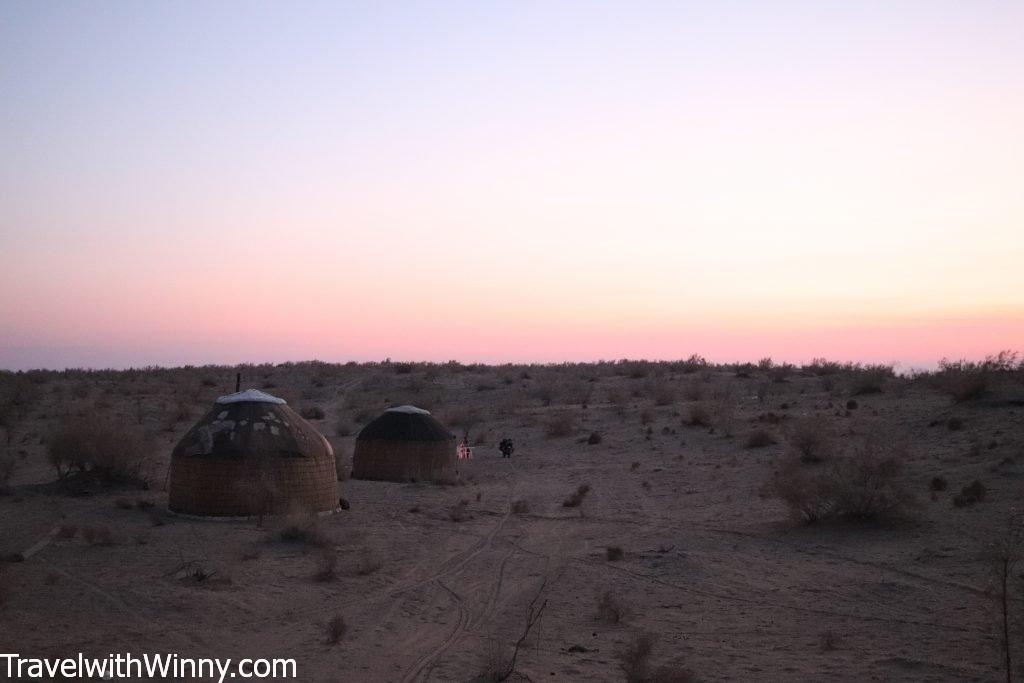 Desert nights can be very cold.

At the crater, we met a family from Ashgabat. Their adult son is a doctor and has moved to Kiev in Ukraine. He brought his Ukrainian wife back home for New Years and this is her first time visiting the Darvaza gas crater. We chatted a bit before they left before the night gets too cold. 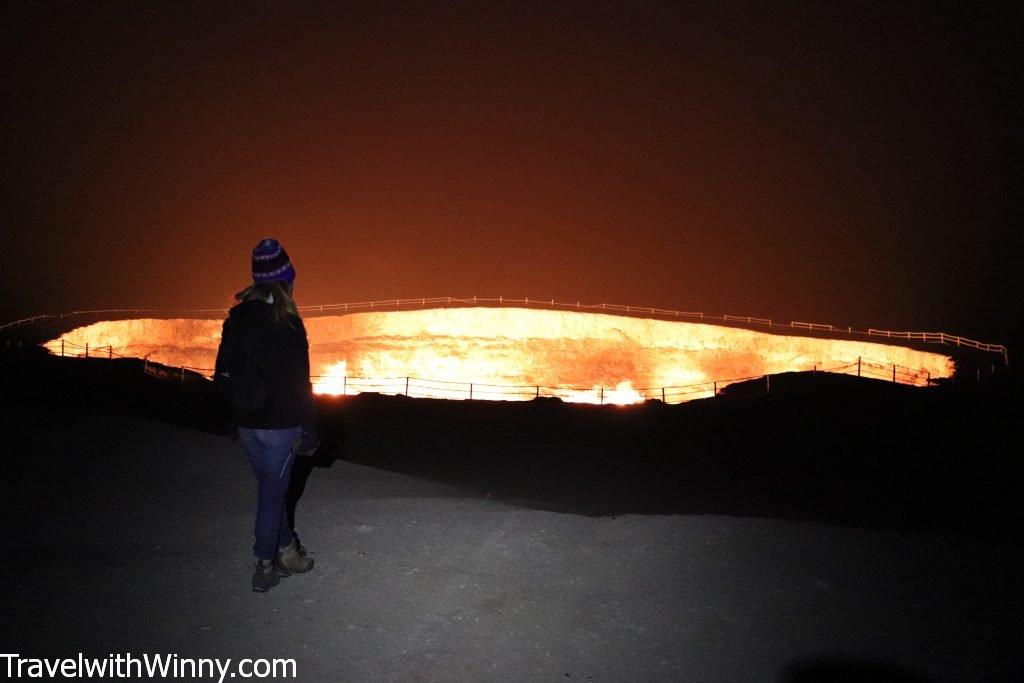 The Darvaza gas crater is now fenced off. I think you can camp next to it as well.

Afterwards, we then met a group of firefighters who spoke Russians only. At first, we thought they were from the armies as their uniform looked military-like. As a precaution, we didn’t take pictures with any of them. Surprisingly, they were quite friendly. We communicated through Google translation for more than half an hour where the head officer told us about the history of the crater.

I think a visit to the Gates of Hell in Turkmenistan is a must for anyone travelling along the Silk Road. Despite the fact it’s man-made, you just don’t see anything like this anywhere else in the world. Also, as it’s not a volcanic crater, there’s no risk of eruptions, so you can camp right next to it.

Problems we encountered when finding the right tour operator

While we were trying to find an operator that suits our needs, the majority of them don’t recommend us to stay next to Darvaza gas crater as it’s too cold! Some suggested us to either drive to Darvaza gas crater in the afternoon and drive back to Ashgabat before sunset (what’s the point of going to Gates of Hell if not seeing it at night?) then fly to Dashouguz to see Kunya-Urgench before going to Uzbekistan. 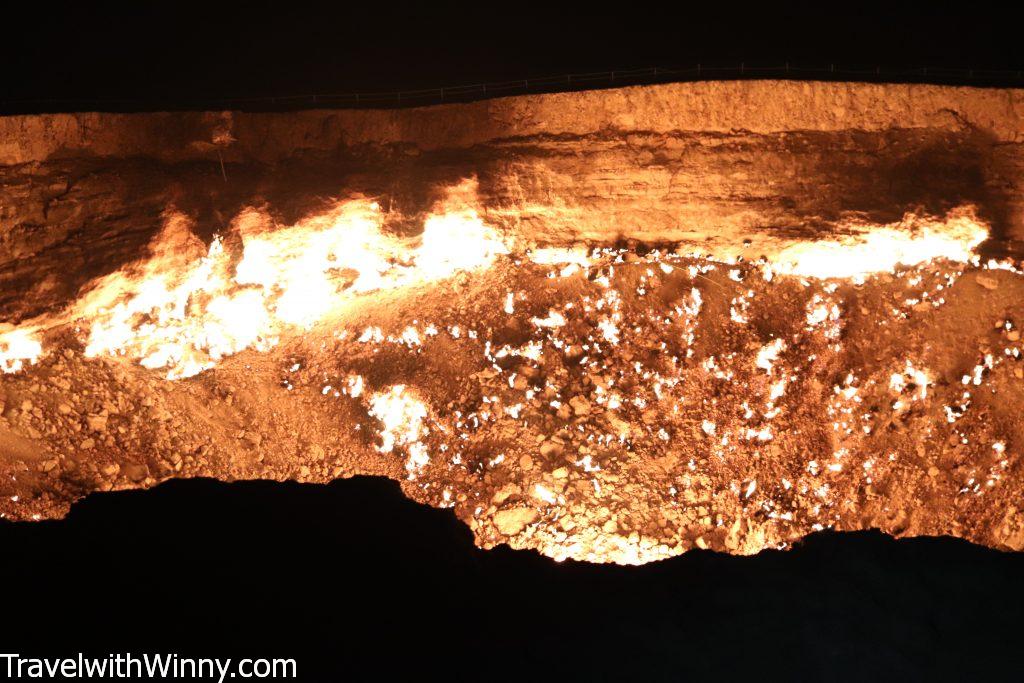 The gas crater itself is like a giant heater!

Or drive to Darvaza gas crater in the afternoon, have early dinner there then drive all the way to Dashoguz which is four hours away! Either way, some suggestions were weird. We were definitely happy with Stan Tours who was able to offer us a yurt in the middle of the winter. 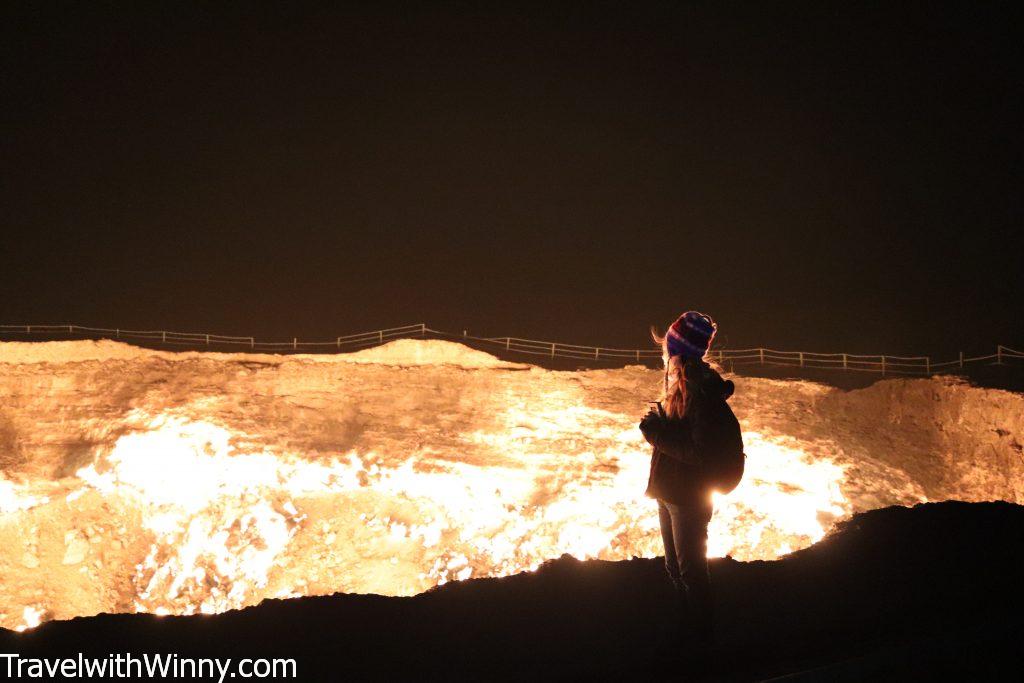 The fire itself was mesmerizing, I would definitely agree with CNN travel that this is one of the weirdest places I’ve been to on earth.

Above is a guide to Gates of Hell in Turkmenistan, hopefully, you will find it helpful. If you enjoy this blog, don’t forget to follow us on IG @ travelwithwinny and see more of our travel stories! Or follow our Facebook page @ Travel with Winny.