Tasmania is an island state of Australia, located 240km south to Australia’s mainland. The climate here is a lot cooler compared to the rest of Australia. It reminds me of New Zealand‘s weather more than mainland Australia! People here in Tasmania are big foodies! It is no wonder travellers base their Tasmanian adventure around food! During this trip, we hope to find the best oysters in Tasmania! 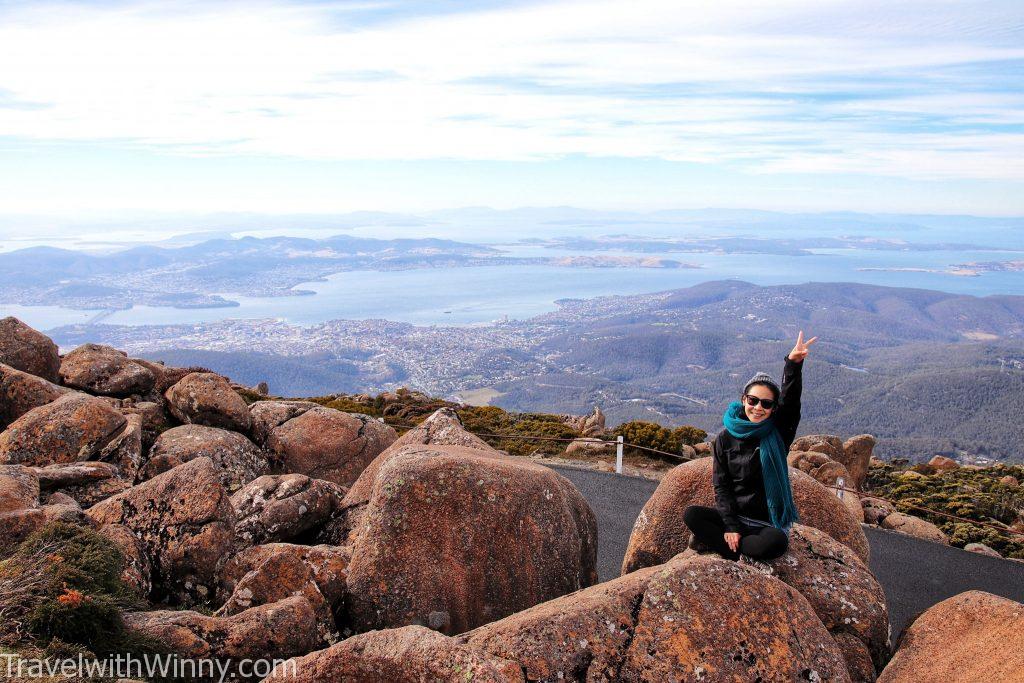 Welcome to Tasmania! This photo was taken on top of Mt Wellington near Hobart.

In Search of the Best Oysters in Tasmania

To be honest, I am not a big fan of Australian oysters. I have tried different varieties in several high-class restaurants, bought them from local supermarkets, yet all of them seems to have this salty taste to it! A dash of lemon should be all you need to compliment a good oyster, not loads of fancy sauces. In my opinion, these sauces exist to try and hide the astringency taste of inferior qualities. 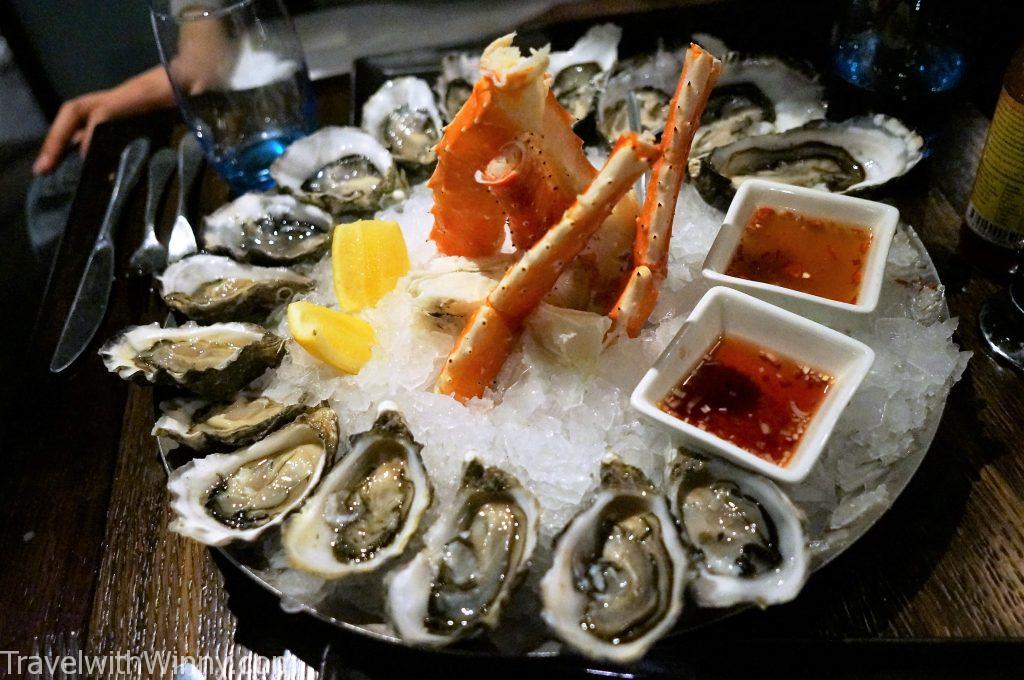 The seafood platter from The Atlantic- Oyster Bar in Melbourne. It included several varieties of Australian oysters, all of which are salty and small.

I think I was too spoiled growing up in Auckland, living 30 minutes away from Clevedon Coast Oysters Farm. Their oysters were huge, fresh and cheap! Their “Jumbo” sizes are so big that you have to eat them in several bites! Some people do find that disgusting, so Bluff Oysters can be your other option. They are a lot smaller but equally sweet, the textures are different from ones in Clevedon. Even though you can get oysters from supermarkets, they are still the freshest direct from oyster farms. 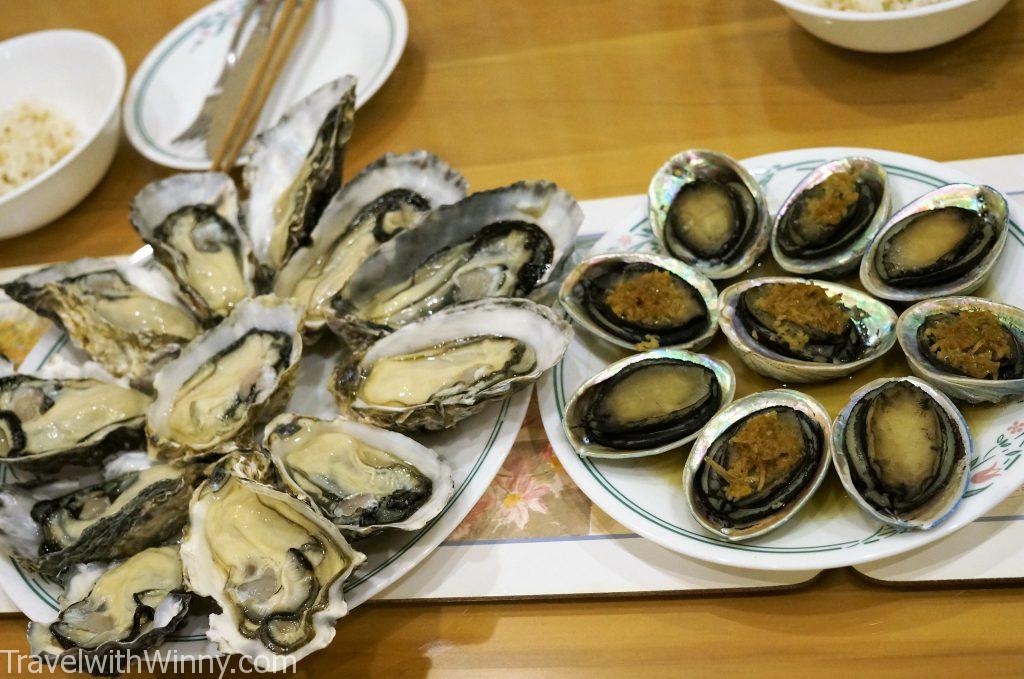 NZ’s Clevedon Oysters comes in different sizes. I think these ones were LARGE (90mm-105mm). Usually, we would get JUMBO ones (105mm-115mm+) but they ran out on this particular day.

My craving for Tasmanian oysters started in 2012 when I first visited this state. Just when I thought all Australian oysters are salty, Tasmanian oysters gave me new hope. From then on, I was really looking forward to my next visit here. Hence this is why I was so adamant to find one of the best oysters in Tasmania on this trip! 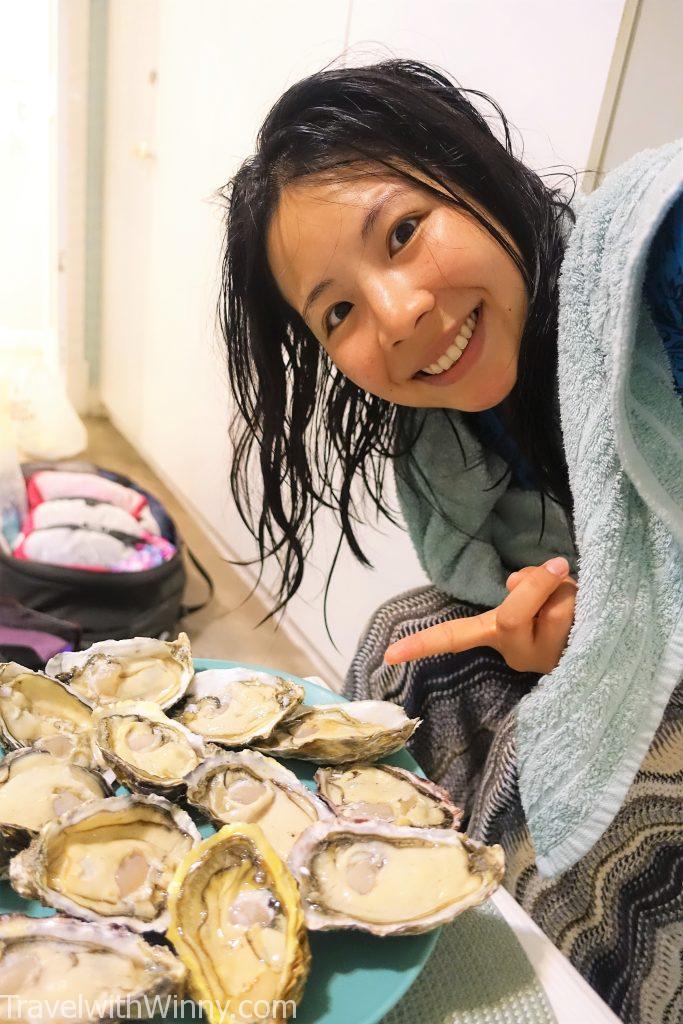 South African oysters from the town Knysna are big and delicious too!

Barilla Bay Oyster Farm is located near Hobart airport, it is the closest oyster farm to Hobart CBD. I came here in 2012 and the quality was superb. However, this time around it was a huge disappointment. We bought four dozens take-away without inspecting them which was a tremendous mistake! The oysters were so small, I won’t even purchase them in local supermarkets! 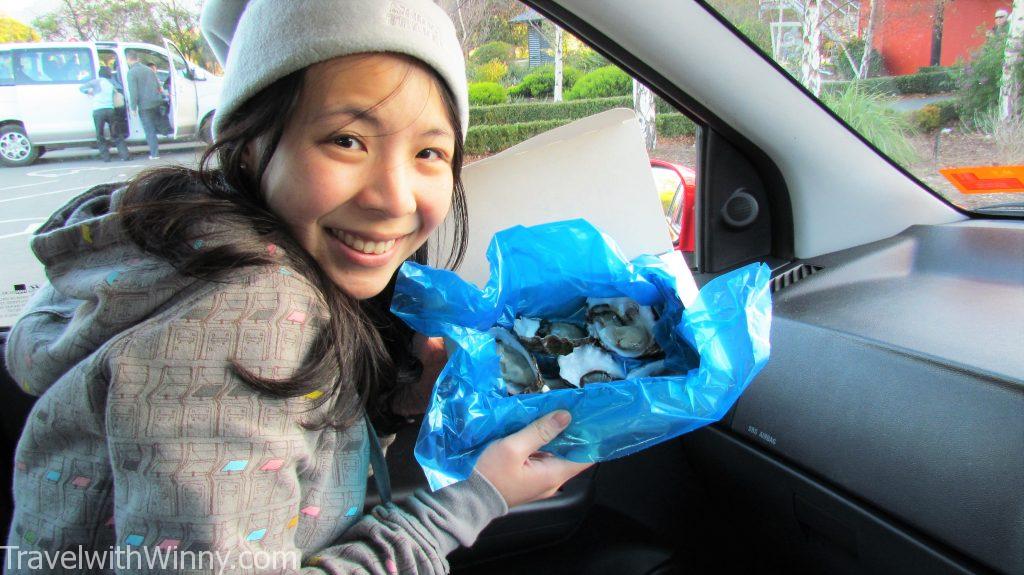 My Barilla Bay Oysters back in 2012. They were cheaper too.

The prices here are AUD$14.90 per dozen vs AUD$20.50 dine-in. Our friends told us that the quality of their oysters has declined in recent years, possibly due to the influx of Chinese tourists who demand oysters in large quantities. Even though the lady said they are slightly larger during summer, but I suspect they probably don’t give these oysters enough time to grow, therefore they are so small. 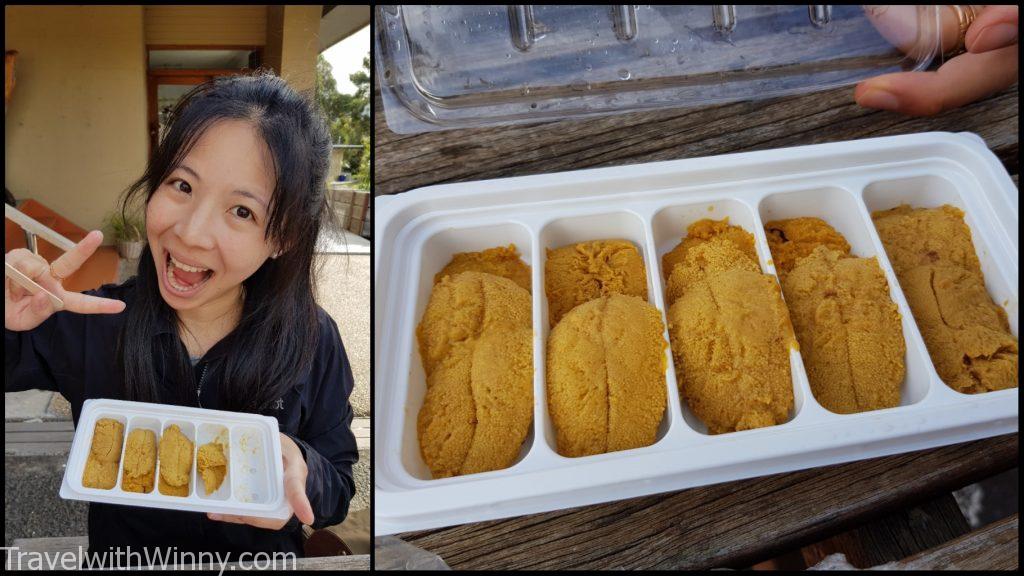 The Grade B sea urchins that we bought from Barilla Bay.

The only good thing that came out of Barilla Bay Oysters were the sea urchins. This is my first time eating sea urchins in large quantity! The lady told us there’s not much difference between Grade B & Grade A sea urchins during April, so we bought the box of Grade B for AUD$28. Personally, I think this is more worth it than the oysters! 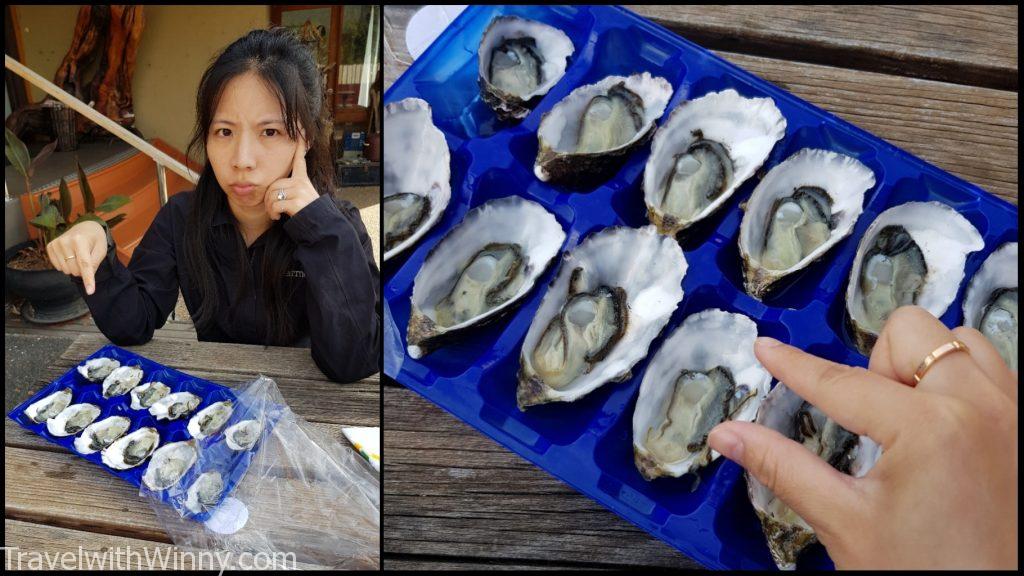 Coles Bay is an Australian town on the East Coast of Tasmania, people come here for the world famous Wineglass Bay which is rated as one of the top 10 most beautiful coves in the world! It is located inside Freycinet National Park where the hike is only 3km return with busloads of tourists. 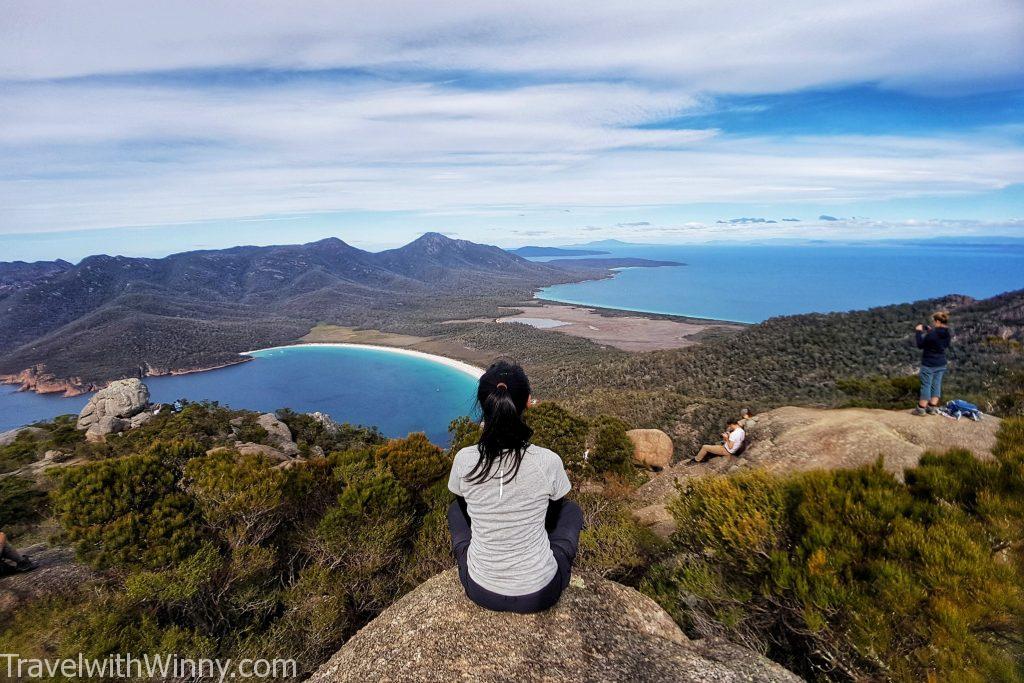 The view on top of Mt Amos with Wineglass Bay on the left and Greater Oyster Bay on the right.

Therefore if you are fit, it’s better to do the 4km return Mt Amos hike which is roughly 3 hours in return. The hike itself is quite steep with a lot of boulders, so come with a pair of good shoes and be ready to be on all fours just to make it onto the top of the summit. The view will certainly be worth it! 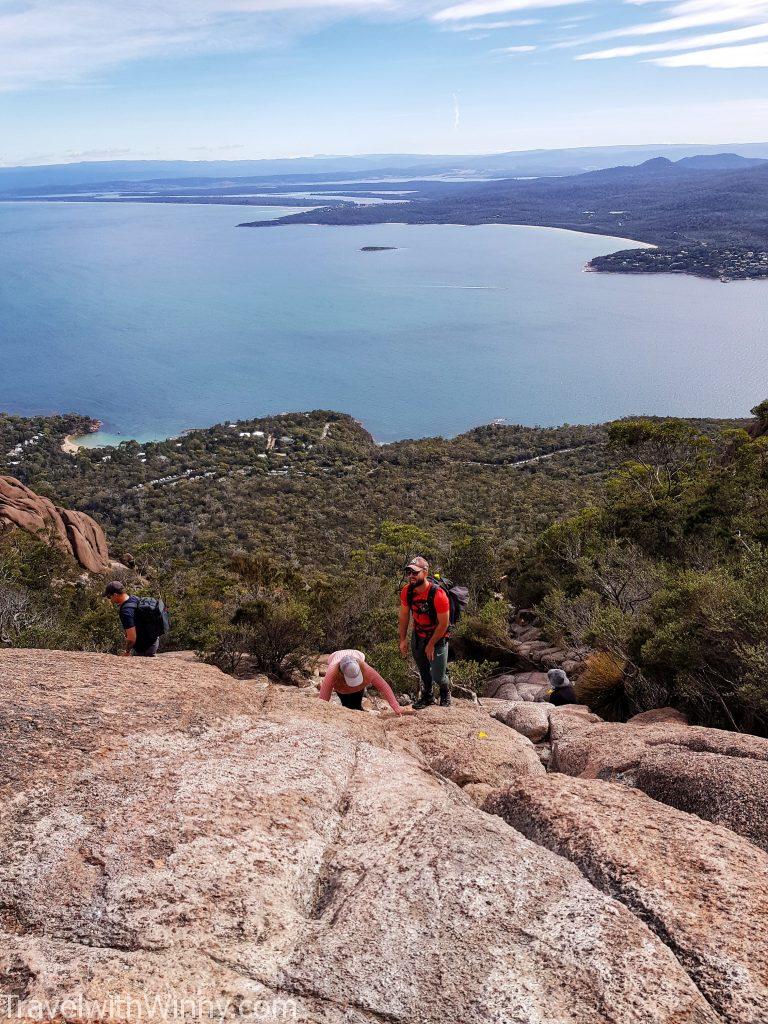 The rocks here are very slippery, so it’s easy to lose grip.

Freycinet Marine Farm is located just up the road from the national park. It has been highly recommended on many travel blogs, possibly that’s why there were a lot of tourists. The oysters here are AUD$24 per dozen and the sizes are no different to ones in Adelaide supermarket. We were hungry for food, yet their fish and chips are AUD$20 each! 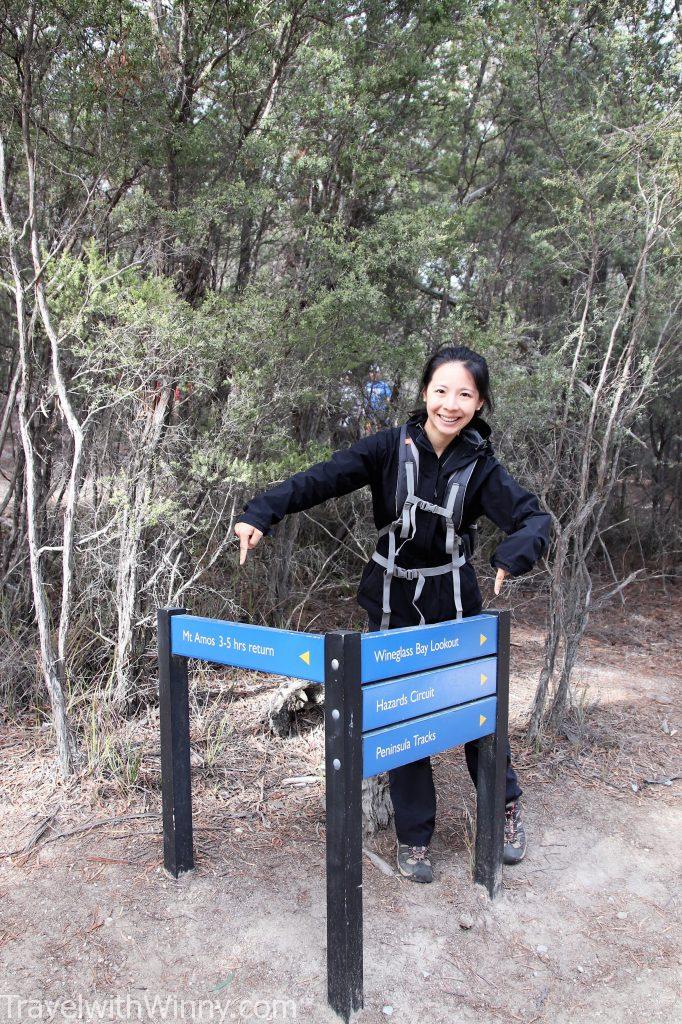 The farm also runs an oyster tour which costs AUD$95 per person. The guide told us that if we don’t want to line up, we can go to Devil’s Corner Cellar Door twenty minutes drive away, they have a second store in that cellar door selling the exact same menu. That winery does have pretty amazing views, however, we ended up finding a smaller oyster farm nearby so we skipped Freycinet Marine Farm all together. 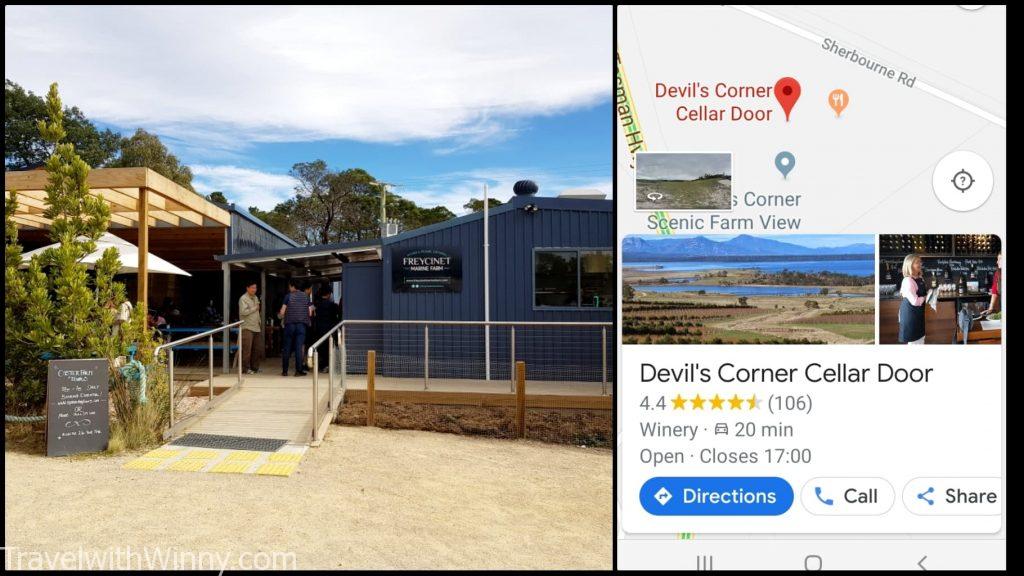 Found Melshell Oyster Shack while I was googling “Oyster Farms” in the area. It is a small shack next to the processing farm looking over the ocean. The oysters here are AUD$20 per dozen & comes with lemon. We are more careful this time and ordered one dozen first before purchasing more. The oysters are definitely larger than ones from Freycinet Marine Farm but still has a salty taste to it. “It tastes like the expensive oysters from Adelaide,” I told my husband. 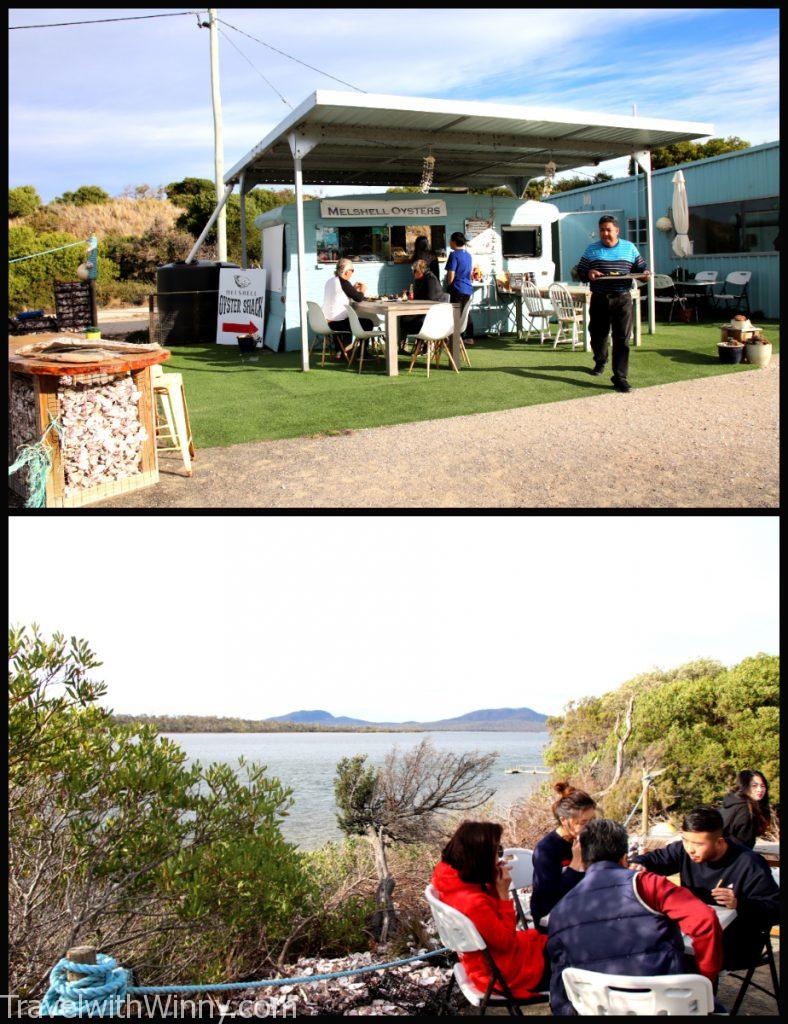 Melshell Oyster Shack is literally just a shack next to the sea.

The owner told us that it takes at least two years for them to grow these oysters. “Ocean and climate can play a part, but ultimately it’s the farmers who can control the overall quality of these oysters,” she said. We ended up having two dozen oysters here as it was our last day in Tasmania. We were surprised to see many tourists actually found this site, guess it’s not as unpopular as we thought. 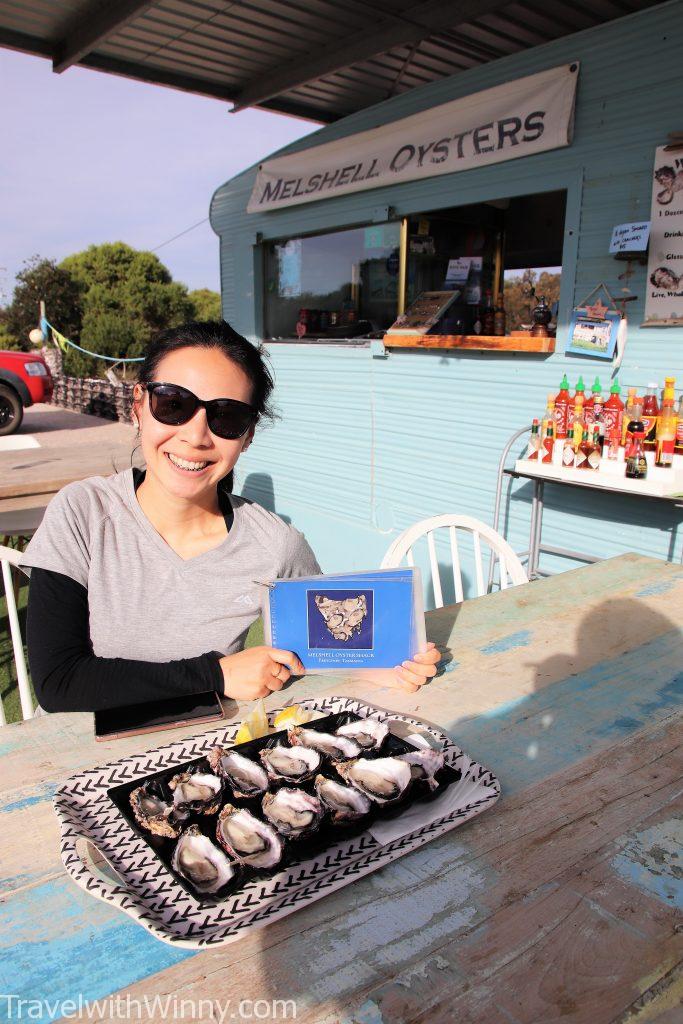 Each dine-in customers were given a book to read about the cultivation while enjoying the oysters.

We found the oysters in The Fish Van totally by luck as we were trying to find a good fish and chips place before arriving at the airport. This little van is located in Triabunna, a little town an hour away from Hobart and is the getaway to Maria Island who’s famous for rock lobsters & other fresh seafood. 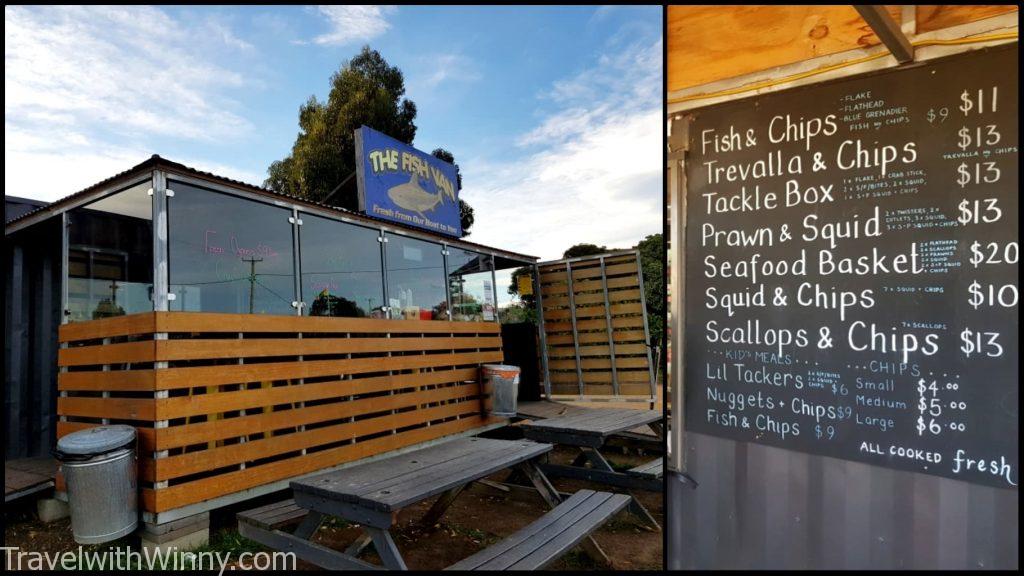 Many people actually come to The Fish Van just to buy oysters.

The fish and chips here are only AUD$11 for a flake, which is considerably cheaper than Freycinet Marine Farm. You may wonder what are “flakes”? Well, flakes are actually gummy sharks caught in Australian waters! They are not endangered so it’s ok to eat them. They are one of the most popular types of fish for fish and chips in Australia. 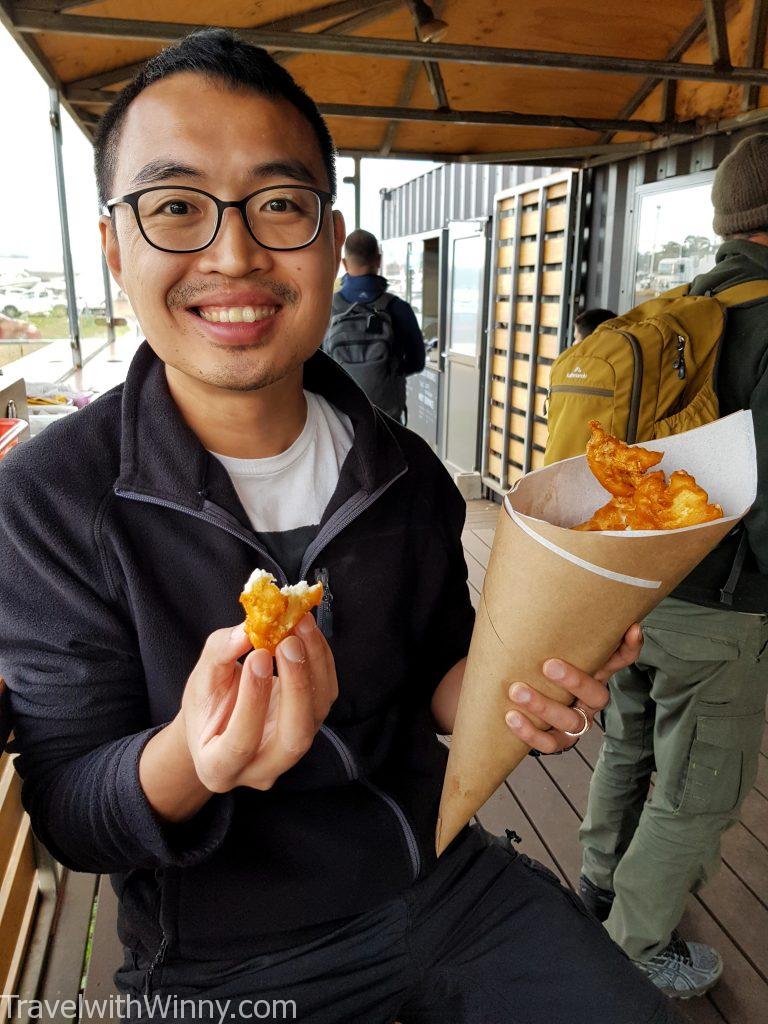 Fish and chips may seem simple, but it’s hard to get it right.

One of the best things about The Fish Van is that they sell amazing oysters from a company called Marine Culture based in a nearby town called Little Swanport. They are only AUD$18 each and are massive, sweet, not salty at all! I can’t believe I finally found my perfect oyster an hour before leaving Tasmania! Thankfully Triabunna is only an hour drive away from Hobart, I will definitely be back in the future! 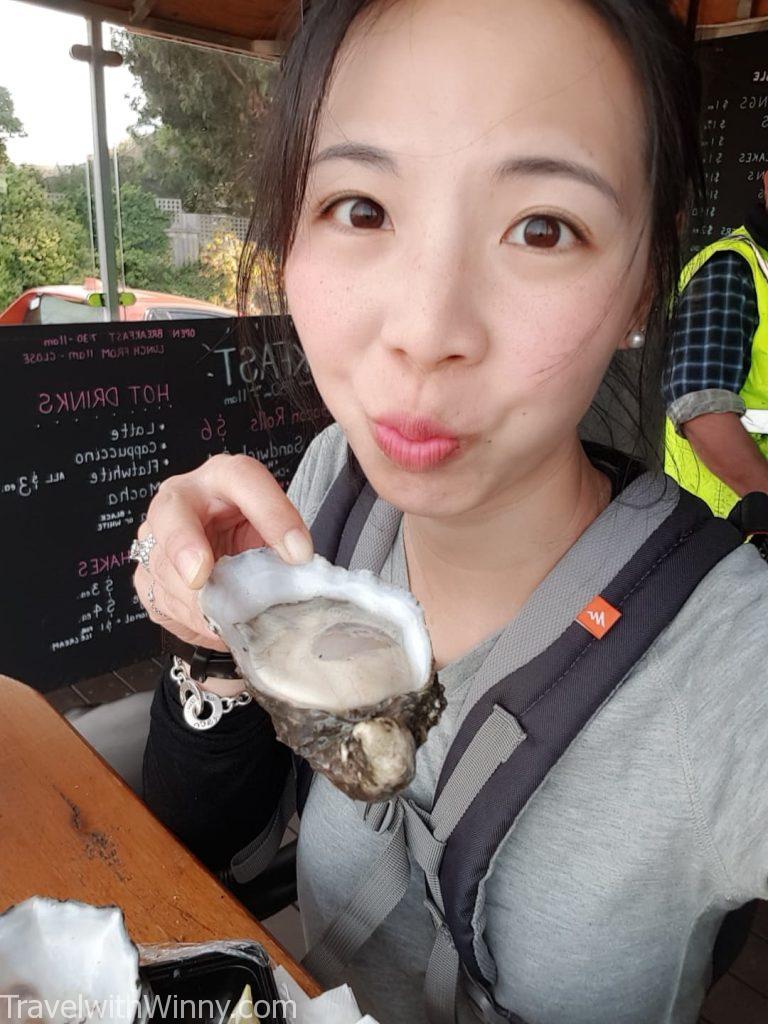 Finally got it right with our 7th dozen of oysters in Tasmania!

Even though we haven’t been the Bruny Island, but it seems like they have one of the best oysters in Tasmania. Judging from our friend’s photos, they are not as big as ones in NZ. Although I think it could be the variety cultivated in Australia since the chart from Marine Culture shows their largest oysters are only mid-size in NZ standard. 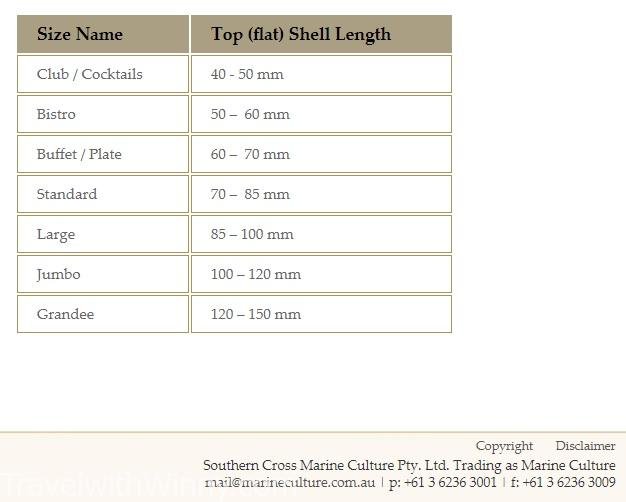 Of course, these are only a handful of oyster farms we tried in Tasmania. There are others on the north-west coast of Tasmania too. Hopefully, we get to visit them next time and do another in-depth review with the oysters!