Turkmenistan is a strange place. It is one of the most isolated countries on earth. According to the World Press Freedom Index, it has the 3rd worst press freedom conditions in the world, just behind North Korea and Eritrea in East Africa. The capital Ashgabat is described as “Las Vegas meeting Pyongyang” by the Lonely Planet guide. 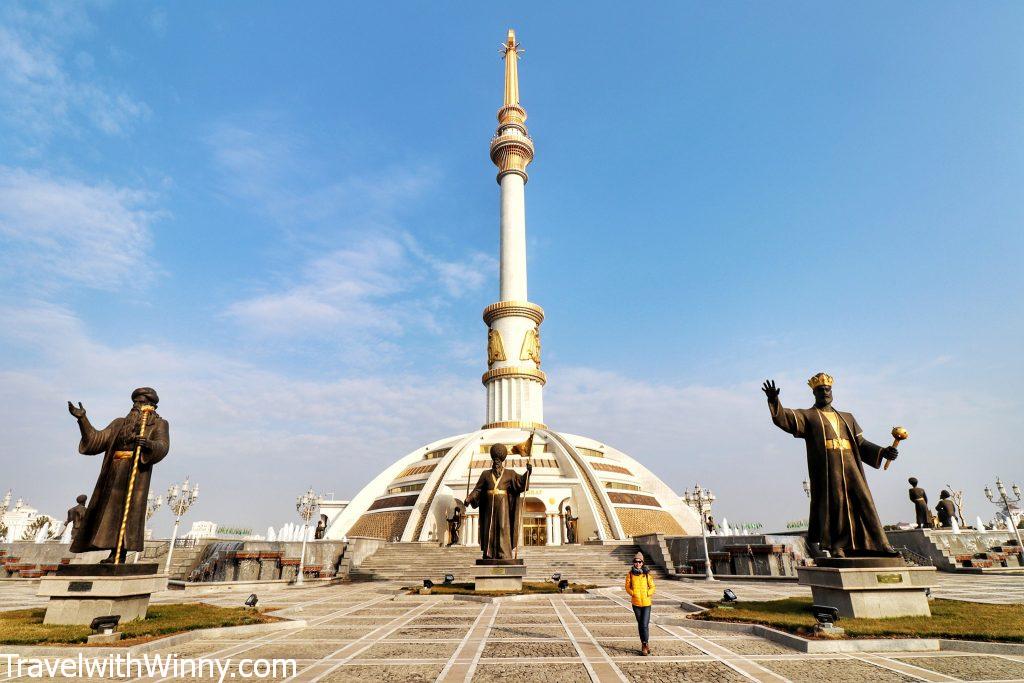 At the Independence Square. The top is crowned by a star with 5 points symbolizing the unity of the five Turkmen tribes.

Although we did get a glimpse of it by watching the Netflix documentary “Dark Tourist“, it just wasn’t as mindblowing as actually being here! Below are the top 13 things that you should be aware of when travelling in Ashgabat.

No.1 It has the world’s highest concentration of white marble buildings

On the last day of 2019, we made our way from Iran‘s border town of Bājgirān into Turkmenistan. The highway into Ashgabat was well-built and the trip took merely an hour before we reached the “City of White Marbles”. 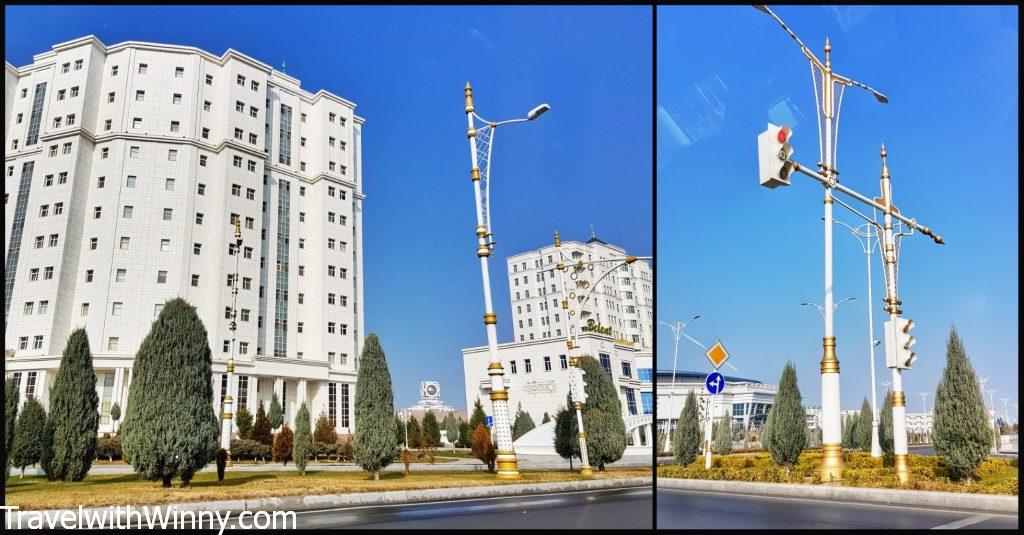 Not only the buildings are white in Ashgabat, but even the traffic lights and lamp posts are also white too.

The city was recorded in the Guinness World Records as the “city with the world’s highest concentration of white marble buildings“. In the space of 22 square kilometres, there are more than 500 government buildings made of marbles! This includes the underpass around the Presidential Palace, where everything from floor to ceiling are made from marbles too!

No.2 Only white cars allowed! (Until a few years ago)

After the collapse of the Soviet Union, the president of Turkmenistan demolished everything built by it precessors. He then built a brand new city in his own vision, where everything is white and outlined in gold. That includes street lights and lamp posts as well. In order to keep the colour schemes the same, only white cars were allowed in the capital until a few years ago. 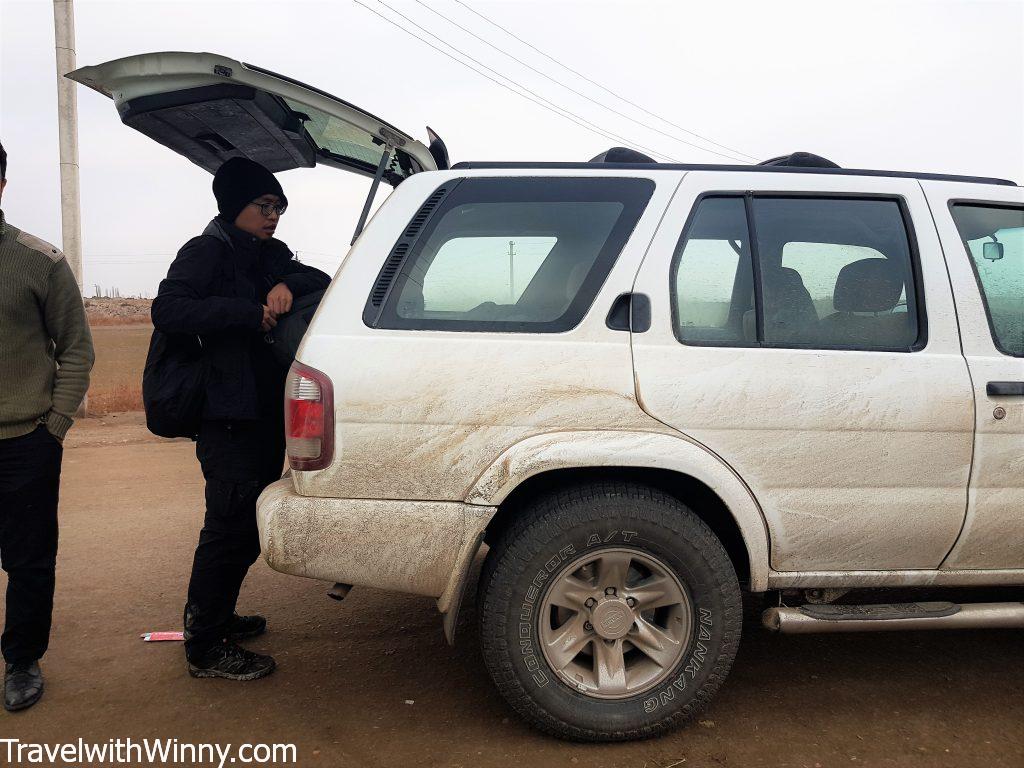 Our jeep after the trip to Darvaza Crater is certainly not fit to drive inside the capital.

Our driver told us that after a visit to the Darvaza Gas Crater, he must take his muddy car to a carwash before heading back into the capital. Otherwise, he will get a fine! When asked how much a dirty car fine would be, he said 150 Manat. In contrast, a speeding fine will only be 100 Manat! Therefore, I guess everything has to be aesthetically pleasing to the eyes. 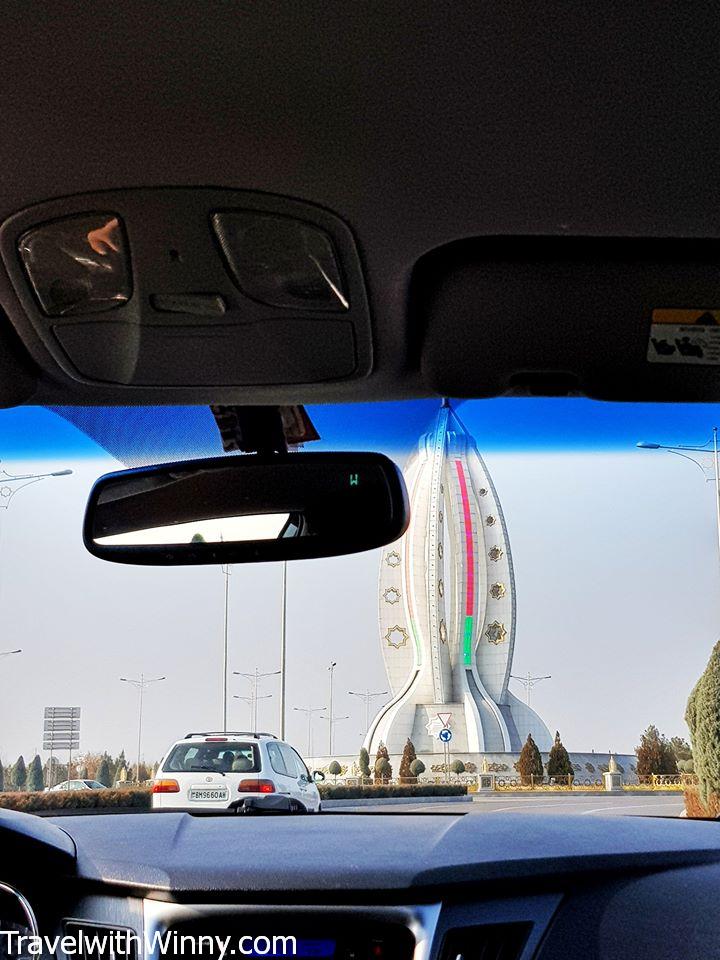 The giant thermometer in the middle of the Ashgabat roundabout with a white car ahead of us.

The Russian Market is a traditional market in Ashgabat. There are a few souvenir stores as well as local eateries within the complex. The price of beluga caviar sold at this market caught our attention. Beluga caviar is supposed to be the most expensive type of caviar in the world, ranging from USD$7000- USD$10000 a kilo! 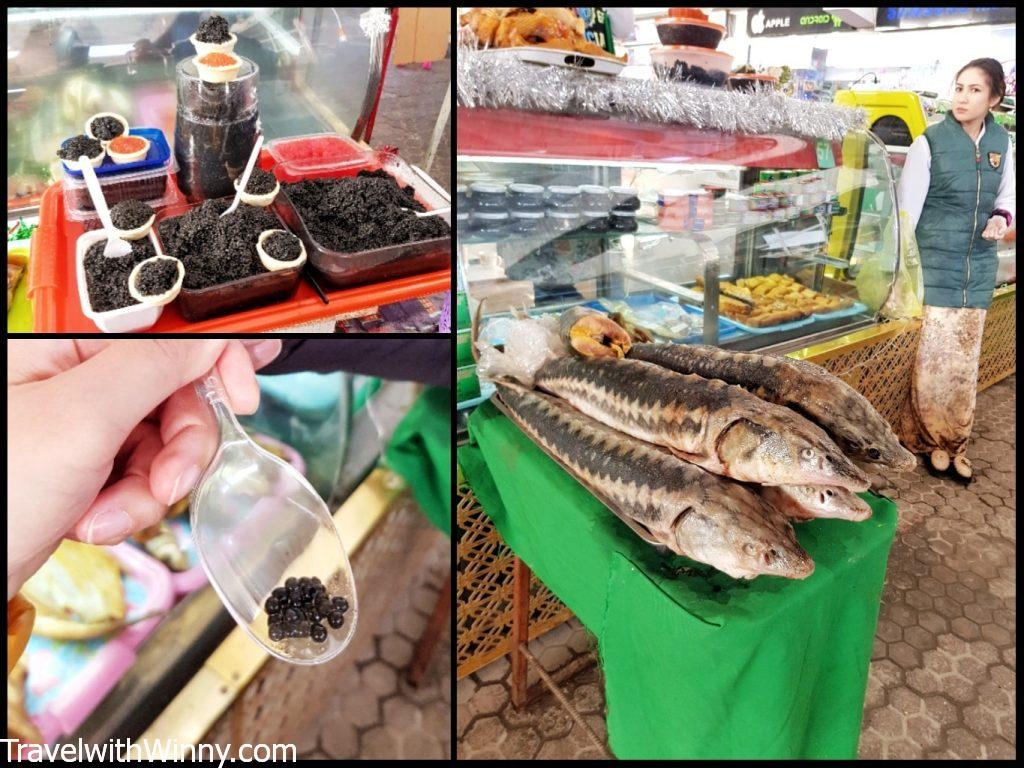 The beluga sturgeons and caviar inside the Russian Market.

These beluga sturgeons are predominately found in the Caspian Sea and they take up to 20 years to reach maturity. As fishing for them are not regulated, they are now considered endangered. These caviars can be purchased at the Russian Market for a fraction of the price, roughly 100g for USD$10. However, we decided to take a stand and help conserve these endangering wildlife by not making a purchase. 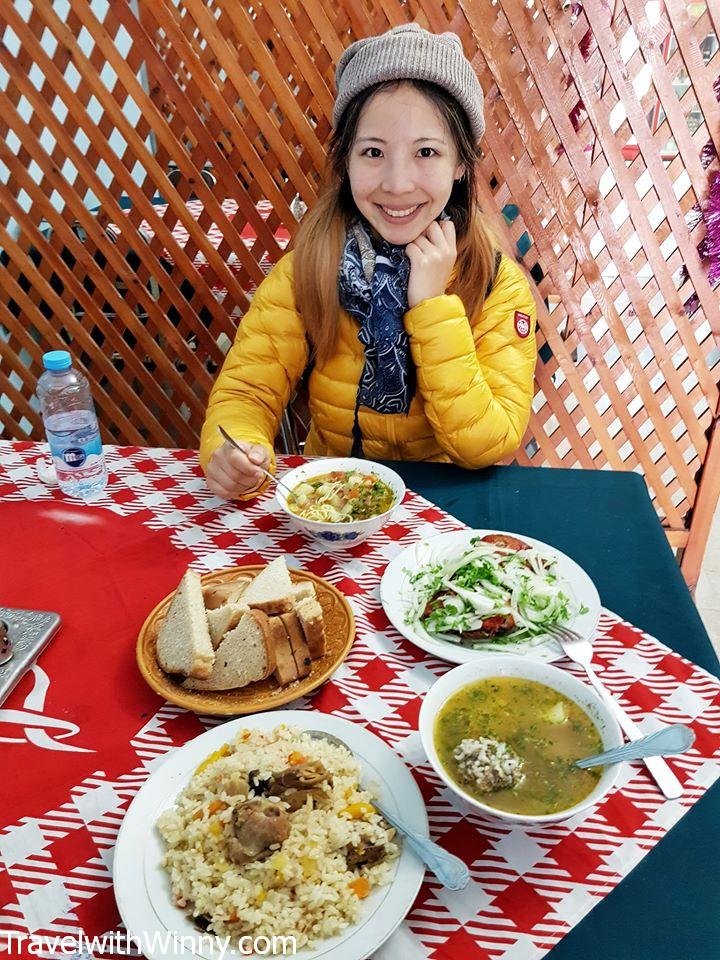 Our daily visit to the local restaurants inside the Russian Market. Our favourites were manty (dumplings), lagman (noodles) and random soups off the menu.

No.4 Do not take random photos of government buildings

While walking down the streets of Ashgabat, you will see many stunning architectures along the way. However, many of these buildings are government buildings and you are not allowed to photograph them. There are soldiers or security guards patrolling around every corner. They will yell at you if they think that you are taking a picture of the government buildings. We have been yelled at by several different police officers by just walking past a government building with a camera in our hands. 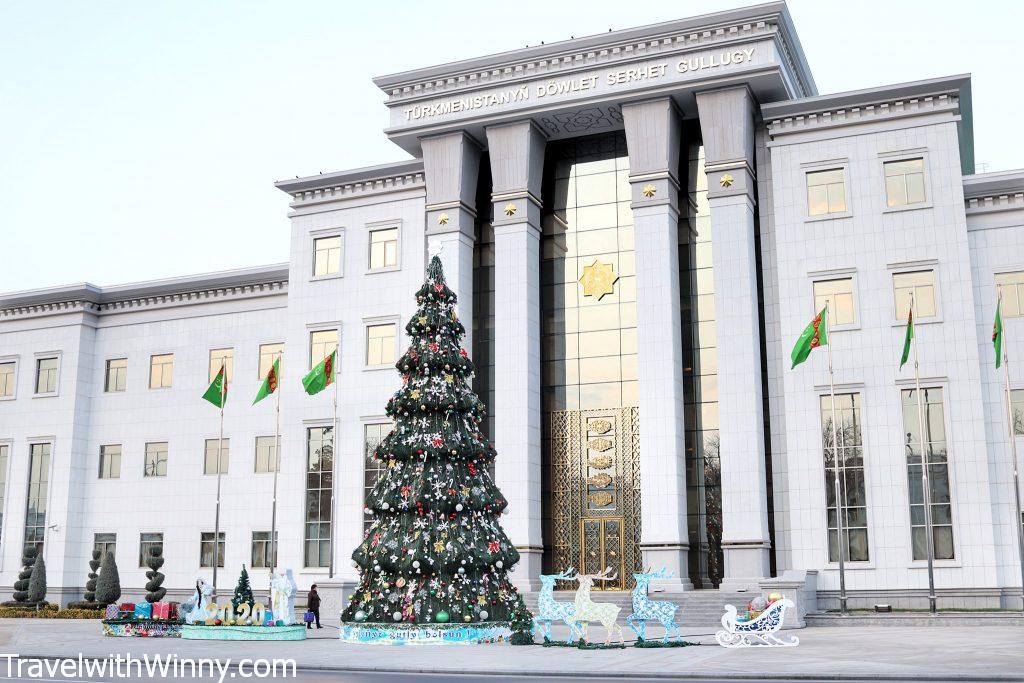 They sure love their Christmas trees, it’s almost like a competition between departments.

Once I wanted to take a photo of a building during a red-light stop, our driver warned us that it’s best not to take a photo here, as there are security cameras everywhere. There’s a chance we could get fined. Therefore, hide your camera away after taking a quick snap will be the best way. Also, back up your photos before leaving the country, just in case you get checked by border security and have your “inappropriate” photos deleted. 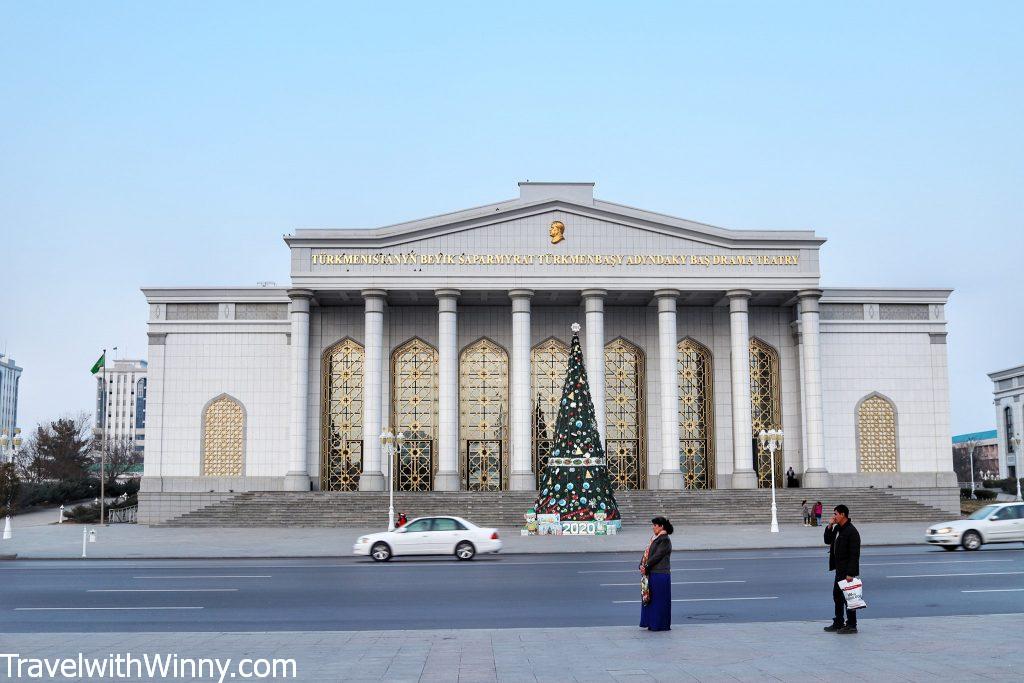 One of the many white government buildings we walked pass on the streets.

No. 5 The largest indoor Ferris Wheel

The largest indoor Ferris wheel on the planet is situated in Ashgabat’s Alem Entertainment Centre. Measuring 47.6M in diameter, it cost 90 Million USD to build. The Ferris wheel was built in 2012 inside the entertainment centre which also features a cinema, bowling alley, restaurants, banquet hall and a kids gaming area.  The ticket for riding the Ferris Wheel was surprisingly cheap, only 5 Manat per person. 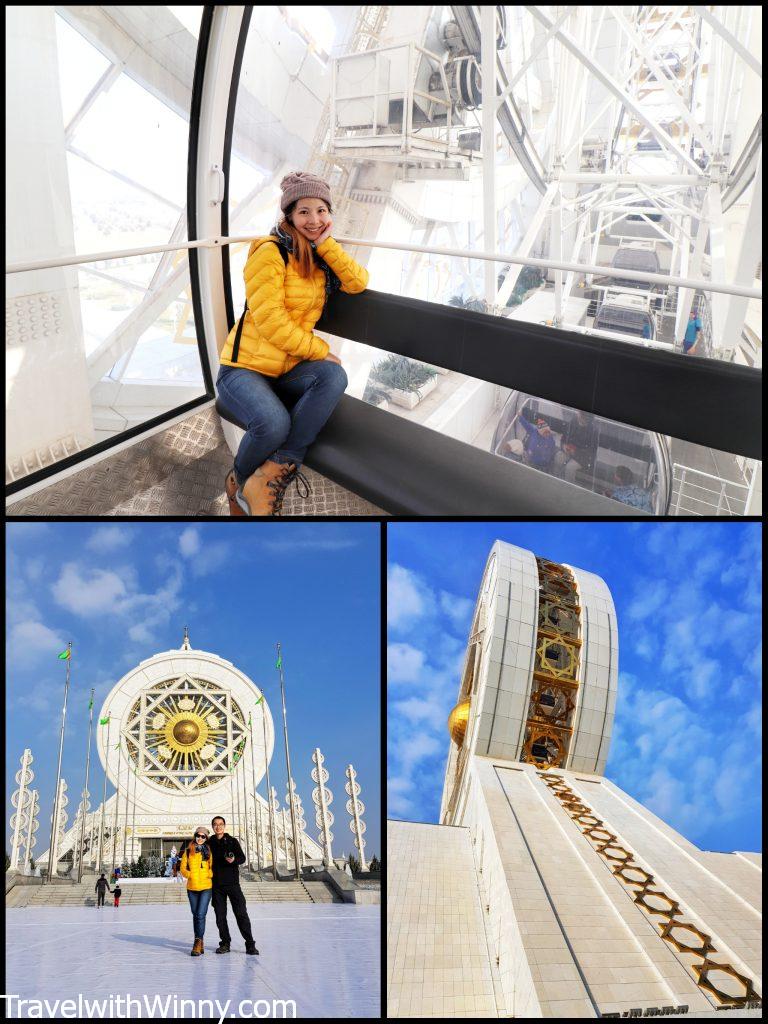 The Alem-entertainment centre was where we had our 2020 count down the party and the giant Ferris wheel had the count down clock projected on it. The Ferris wheel has a view of Ashgabat city from one side and the desert from the other. 80% of Turkmenistan is actually covered in desert and directly around Ashgabat are all desert too.

No.6 The Olympic Stadium that have never held Olympics

Saparmurat Turkmenbashi Olympic Stadium is a stadium that can hold up to 45,000 people. It also holds the Guinness World Record for the “largest horse head sculpture“. Despite the name, this stadium has never hosted the Olympic Games and Turkmenistan has never bid to host such games. The only international games held in this stadium was the 2017 Asian Indoor and Martial Arts Games. The only spectators allowed were locals from Turkmenistan and foreign press. 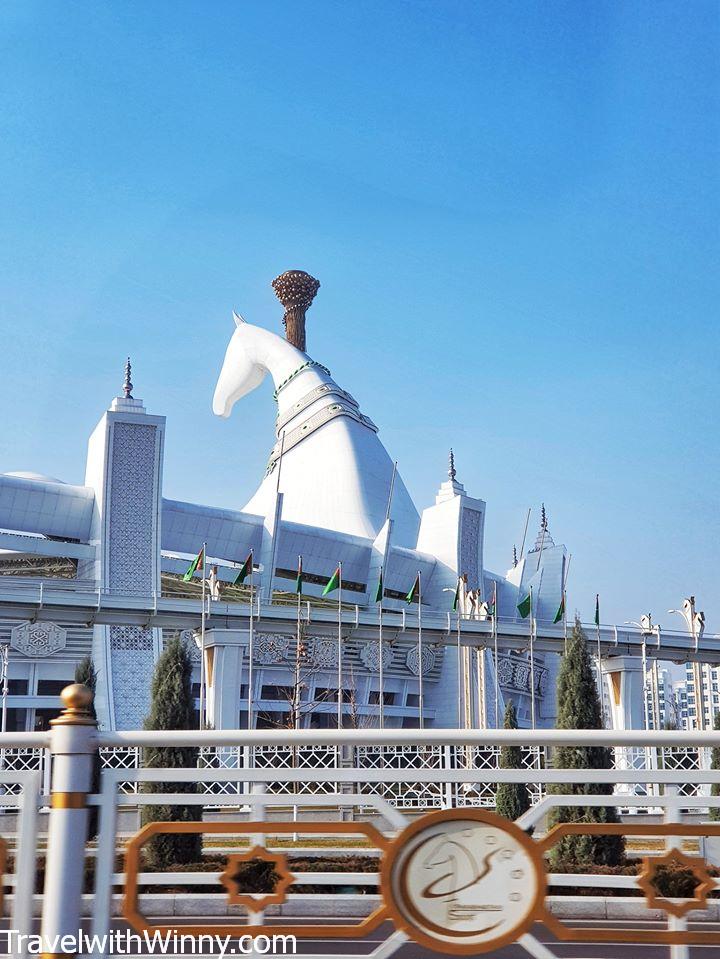 The largest horse head sculpture in the world according to the Guinness World Record.

Apparently one of the main reasons why the Turkmenistan president spent billions of dollars building this stadium and hosted the 2017 Asian Indoor & Martial Arts Games was because Turkmenistan has never won any medals in the official Olympic games. He wanted to redeem his country by hosting his own games. In the 2017 Asian Indoor and Martial Arts Games, Turkmenistan won 245 medals, way more than any other countries participated. China, who won the third most medals in the Rio Olympic games only won 97 Medals. This most likely means that most countries didn’t send their best athletes to compete. 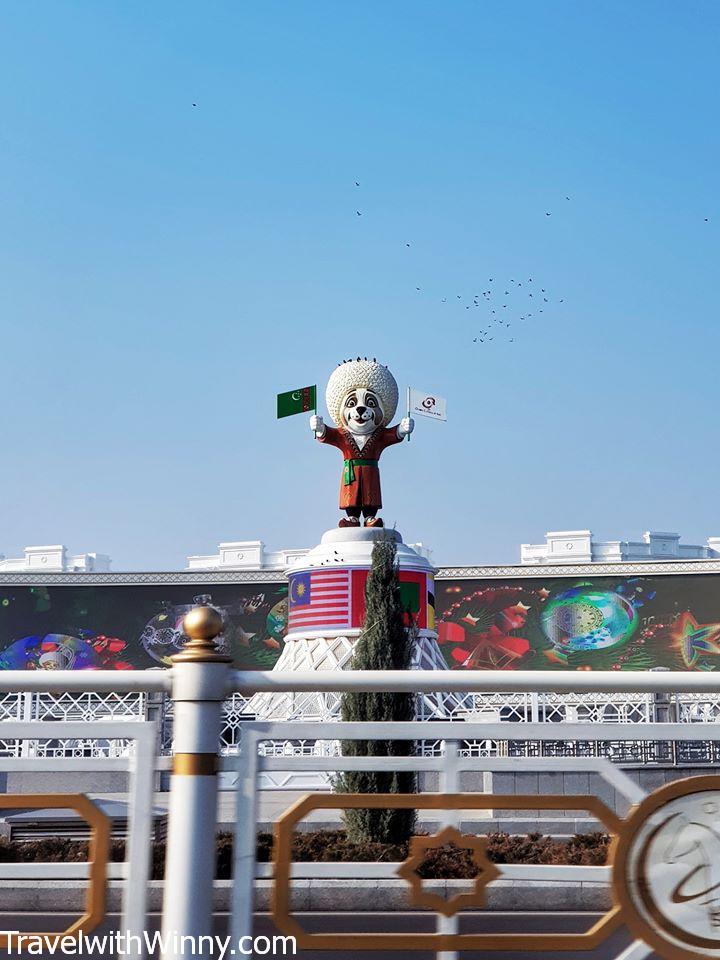 The mascot for the 2017 Asian Indoor and Martial Arts Games I believe.

I highly recommend you to watch Dark Tourist on Netflix. It’s where we first learnt about all the crazy things happened in Turkmenistan. It has an episode about this stadium and the 2017 Asian Indoor and Martial Arts Games where the host went in there as a press.

No. 7 The president loves himself

Since the independence of Turkmenistan, both presidents use personality cult to gain popularity & the trust of its people. The photos of presidents are virtually everywhere. Needless to say, you are not allowed to criticize the government or the president in any kind of ways. 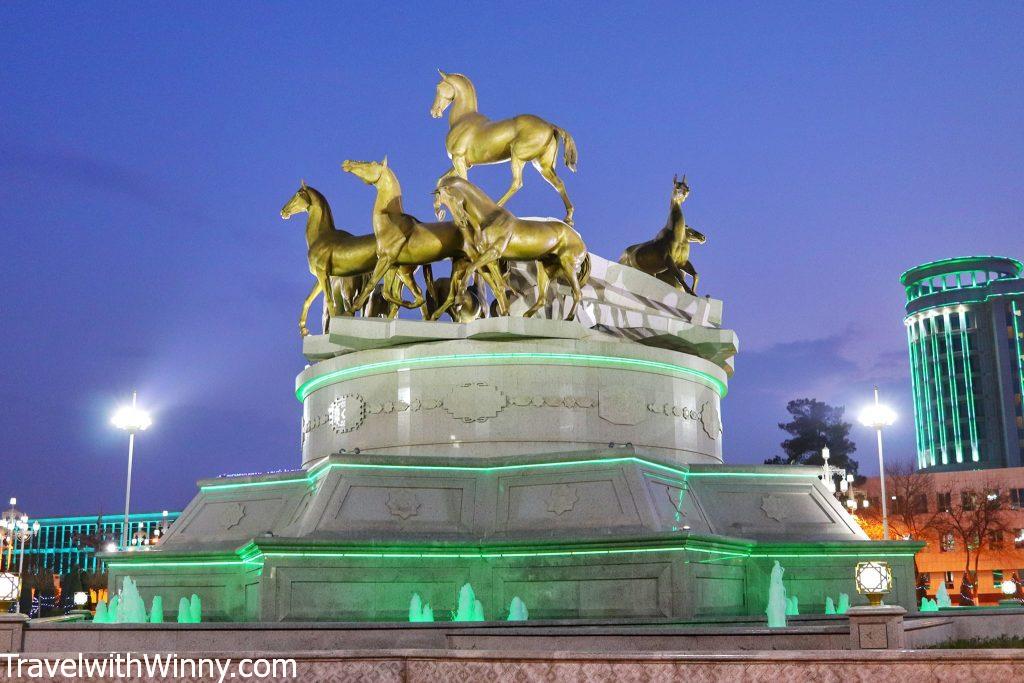 The horses of Turkmenistan are the president’s pride and joy.

Once the Turkmenistan president fell off a horse at an unknown race. He was so embarrassed that he made the securities to search and delete everyone’s footages of him falling. He even went through the effort of checking the memory cards of the mobile devices and cameras of departing passengers at the airport, in order to make sure that no footages left the country. Unfortunately, there’s no way of stopping a video leakage and you can watch it here on YouTube.

No.8 Collection of Guinness Book of Records

Ashgabat holds many other Guinness Book of Records, a few of them are as below. 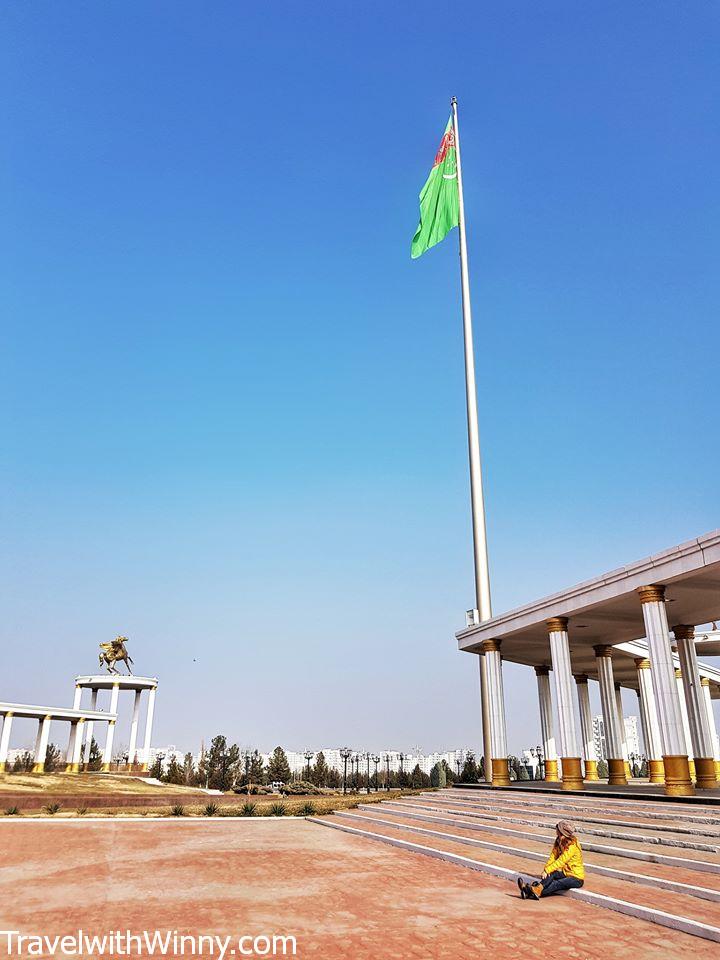 The flag pole outside the National Museum of Turkmenistan is the fourth highest in the world. 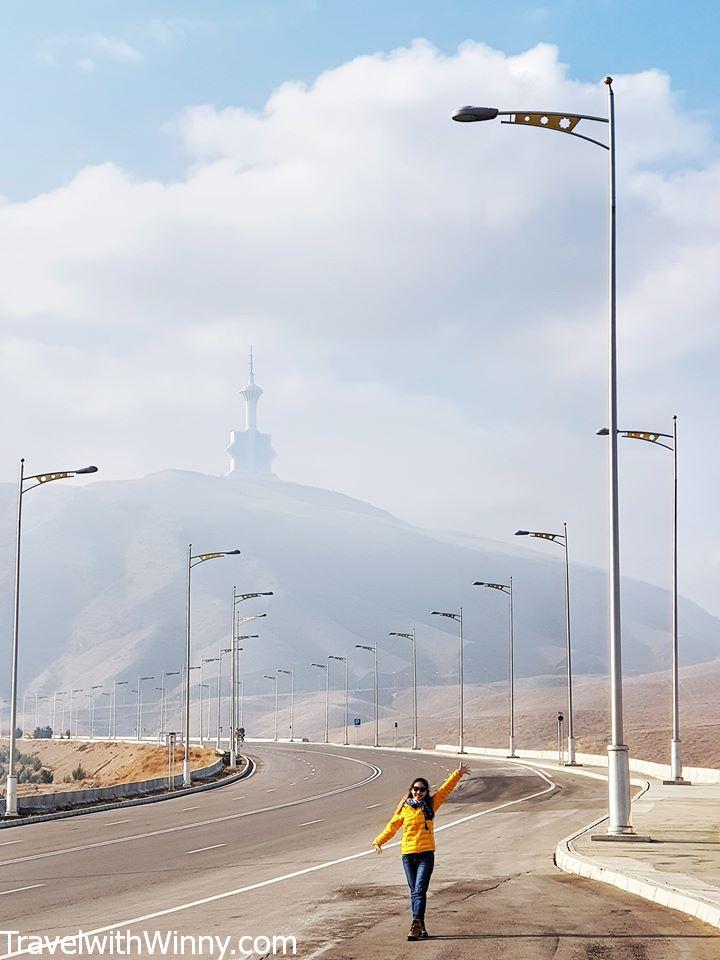 You won’t see any official taxis in Ashgabat, because every car on the road is one! The “ride-sharing” concept was quite popular during the Soviet period. If you just wave on the streets, most likely someone will stop and will offer you a ride at an agreed cost, depending on the direction of your travels. 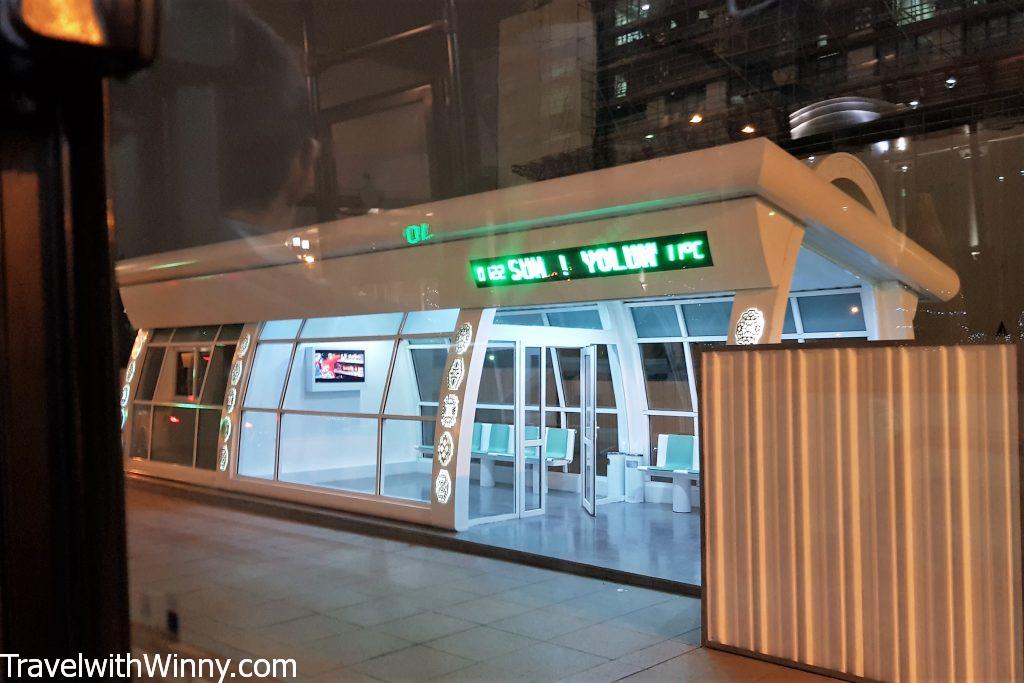 The bus stops in Ashgabat is well-made. Many with route maps on the wall.

Alternatively, a bus ride is only 0.5 Manat and the bus driver will even give you the correct change! The problem with catching the bus is that there are no timetables online. Fortunately, most bus stops have route maps and they come quite often. 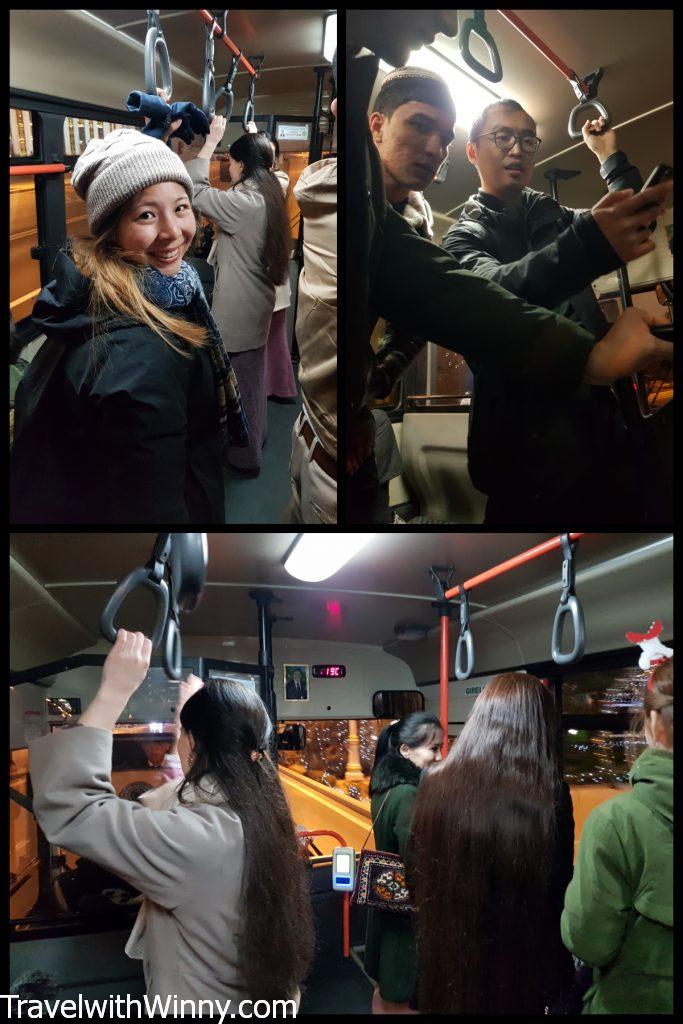 Our local bus trip to and from the Alem Centre on NYE.

No.10 Social media is quite difficult to access, even with VPN

Internet is not readily available in Turkmenistan. Tourists will need to use their passports when going to an internet cafe . Alternatively, all five-star hotels should be able to provide free Wifi access at the lobby. I simply walked to the lobby of Grand Turkmen Hotel and asked for the Wifi password, they gave it to me for free! 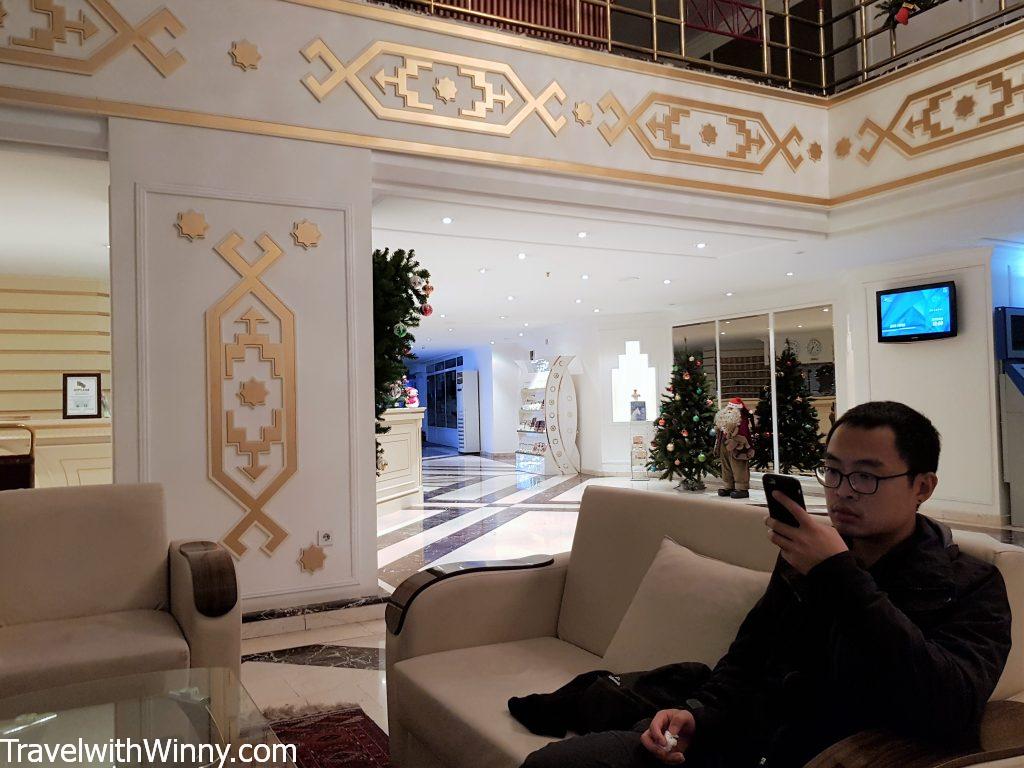 Most communication software (ie. Whatsapp) and social media (ie. Facebook) is not accessible even with VPN. We used two paid VPNs but neither of them worked. Apparently, the U.S Embassy has unrestricted internet access but it wasn’t open when we were there due to public holidays.

No. 11 How to get Turkmenistan Visa 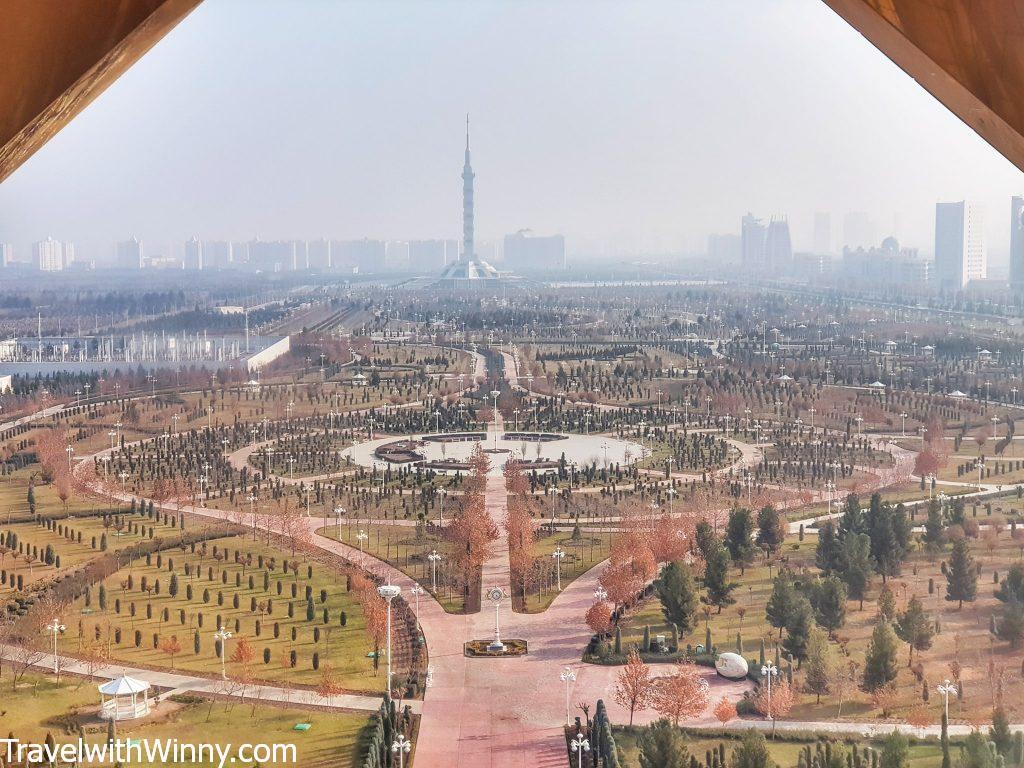 The view of Ashgabat when seen from the Ferris wheel.

Even with all the documents required, there is still a high chance your transit visa getting rejected. Though the approval rates have been increasing. If you get approved, you will receive a time frame that usually does not exceed five days. The transit visa is definitely the cheaper visa but carries more risk and uncertainty. 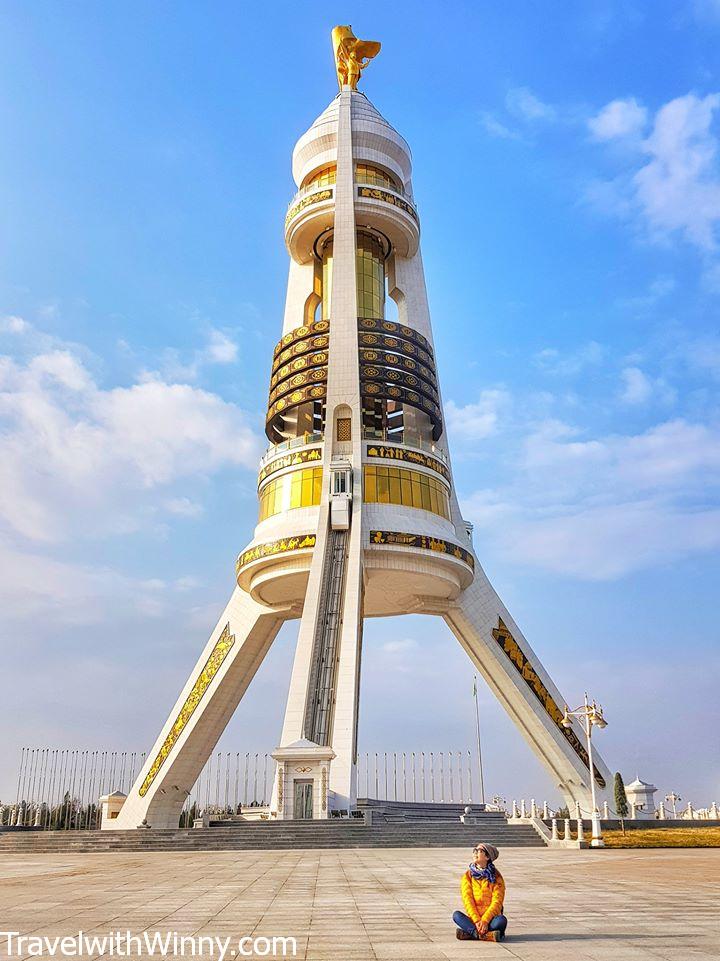 This rocket-like tower is called Bitaraplyk Binasy, built to commemorate Turkmenistan as a permanently neutral state.

The other way is to get a tourist visa through an approved travel agency. The cheapest quote we got was from Stan Tours. Although the owner lives in Kazakhstan, he responded quickly to all our questions. The travel agency will issue a Letter of Invitation which will usually guarantee the visa to be issued at the border. However, I heard that there’s still a slim chance of rejection even with the more expensive tourist visa.

No. 12 How much is it to travel Turkmenistan?

We originally thought the visa was going to cost us USD$90 per person plus USD$15 for the immigration card. However, we were only charged USD$69 per person in total. The cost of the 4 days 3-night tour from the Iranian border to Uzbekistan border, including 2 nights in Ashbagat and a night at Darvaza crater was USD$400 per person. We also paid USD$50 extra for the two of us for a half-day city tour due to the difficulty of using public transport on 1st January. 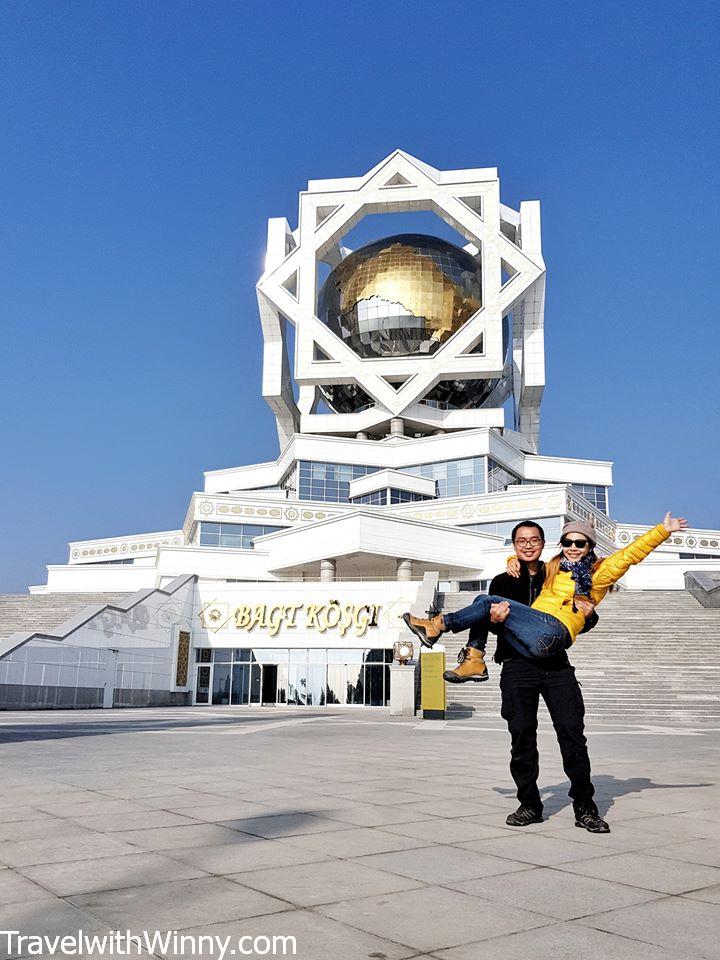 This disco ball-like structure is called “The Wedding Palace”. Apparently, all the newly-weds dreams to have their weddings here. 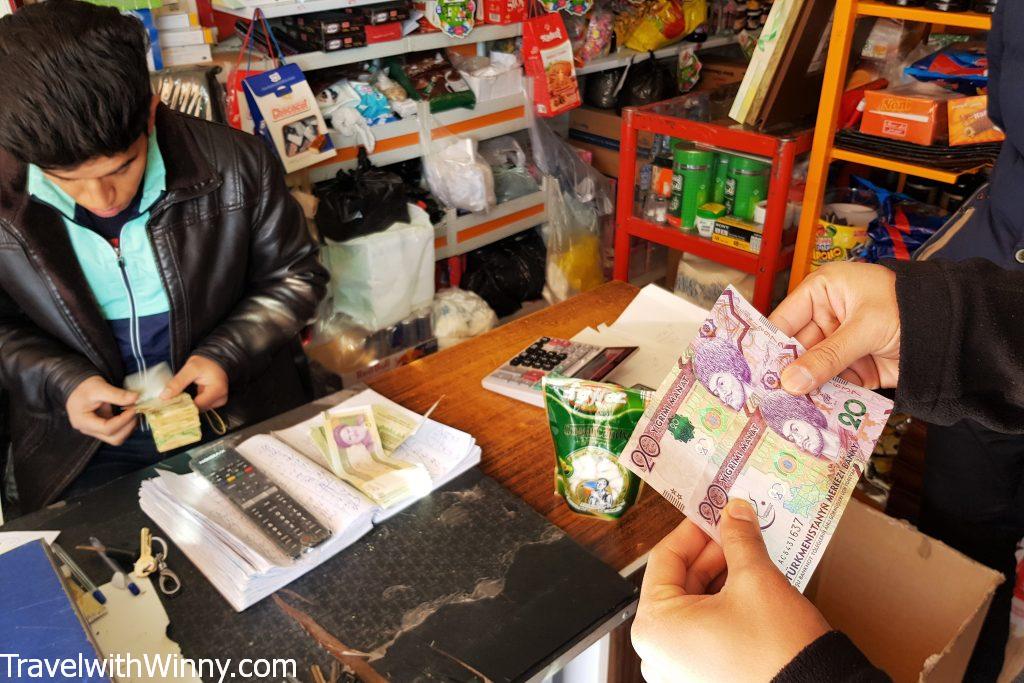 Above is a summary of what we think you should be aware of when visiting Ashgabat in Turkmenistan and hopefully you will find it helpful. If you enjoy this blog, don’t forget to follow us on IG @ travelwithwinny and see more of our travel stories! Or follow our Facebook page @ Travel with Winny.