This is a story of how our 5-hour journey from Samarkand to Dushanbe turned into a 13-hour adventure. The original plan was to travel to Dushanbe through the Panjakent border. However, we had to travel to Dushanbe through the Tursunzoda border instead, as our route was closed due to snow closure. We paid over three times the amount of our budgeted travelling fee and spent over 11 hours travelling. Maybe it’s because of our excitement of experiencing snow for the first time in Central Asia, we completely forgot that the mountain pass between Panjakent and Dushanbe can be closed due to snow. 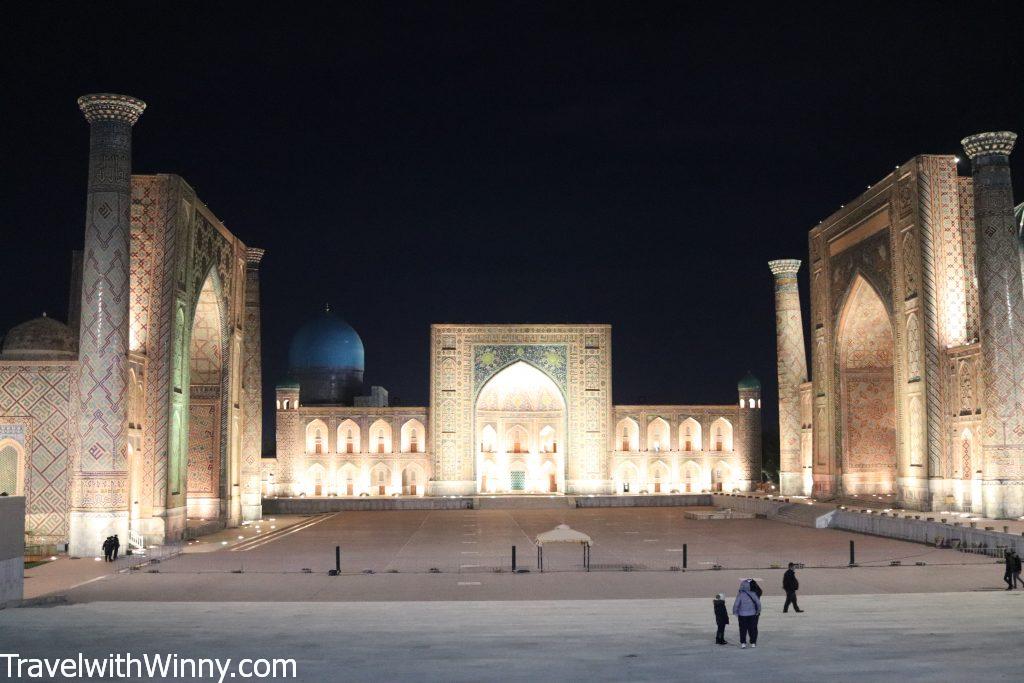 Leaving Samarkand and heading to Dushanbe

In the early morning, we started our 3km walk to the Kaftarxona bus station catch a minivan that takes us to the bus station which will take us to the Panjakent border. A local driver stop next to and asked us if we needed a ride. We asked him to drop us off at the Kaftarxona Bus Station as we are travelling from Samarkand to Dushanbe. Soon we realised that the driver is actually a taxi driver and discussed quietly, how much we should pay him. But the driver was just giving us a lift out of kindness and wouldn’t even accept any payment at all. 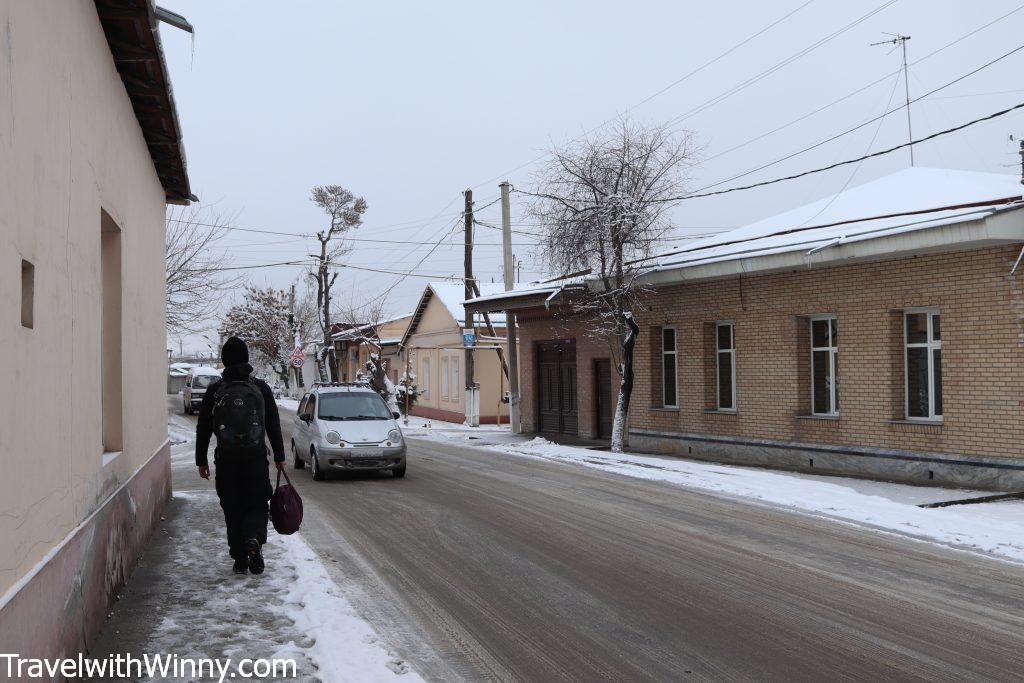 On our Samarkand to Dushanbe journey. Arriving at Kaftarxona bus station and waiting for a minivan to go to Panjakent border.

As soon as we jumped off the bus at the Panjakent border, we were surrounded by taxi drivers telling us that the pass to Dushanbe is closed. Due to our previous experiences, we learnt that taxi drivers can be untrustworthy. Hence, we decided to ignore these drivers and walk straight to the border and asked the border guards. Unfortunately, the border guards informed us that due to heavy snow, the road to Dushanbe is currently closed. To get to Dushanbe on the same day, we have to travel to another border near the town of Tursunzoda and this route will take around 11 hours. We knew about this route due to our prior research and many had said that Tursunzoda border would be a safer border to cross in winter. But Panjakent border had been open until this day and it is a much shorter and cheaper route. 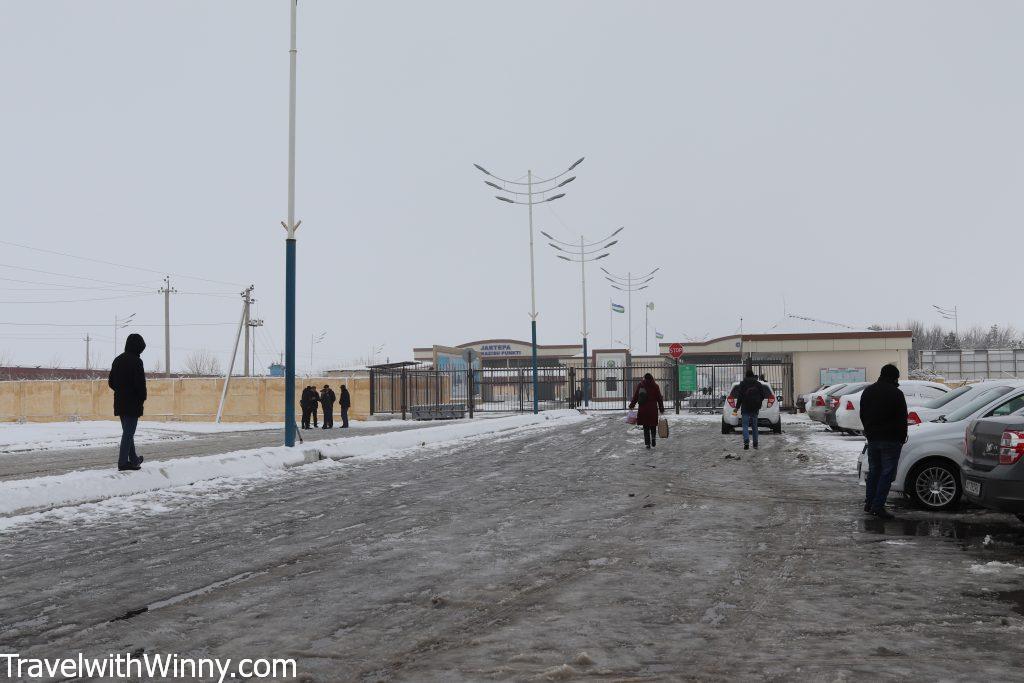 Photo of the Panjakent border which we recover after it was deleted by the border guard.

We walked back to the group of vulture-like taxi drivers to work out what is our next best options. Only one of the drivers offered a price of USD $100 to drive both of us in a shared taxi to the Panjakent boarder. He was the only one offering to do this leg, so we had to try to pretend that if he doesn’t drop the price, we will go back to Samarkand to find a cheaper ride. We haggled with him for a while and in the end, we settled for USD $55 for two people. Otherwise, the original price of the journey from Panjakent to Dushanbe was only USD$10 pp. 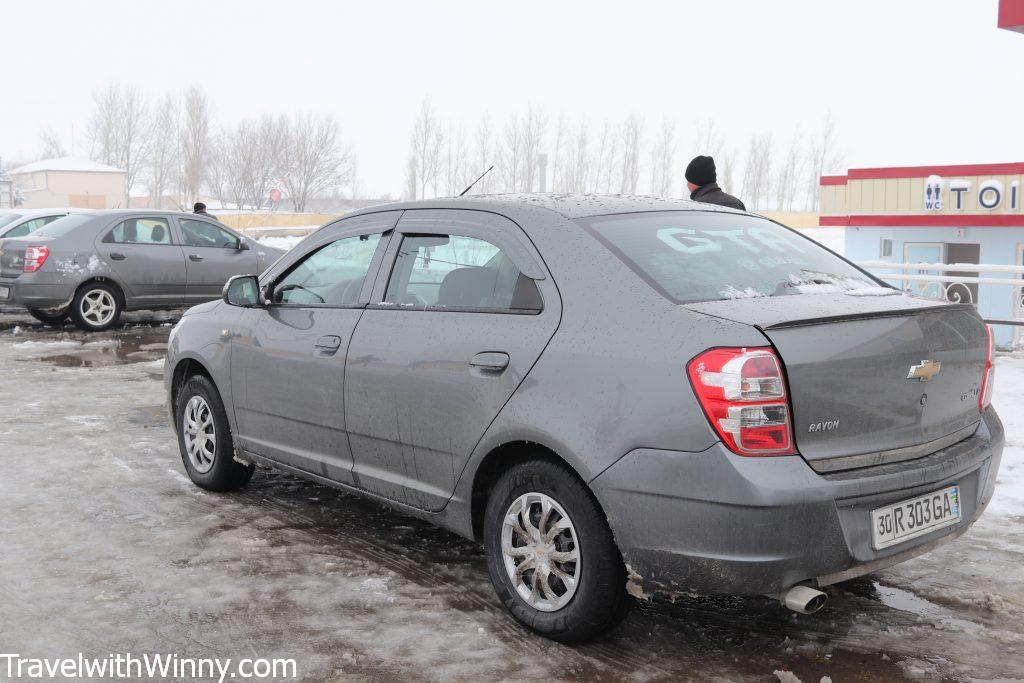 Our ride to the Tursunzoda border which costs us USD$55 for both. This is the long way to travel from Samarkand to Dushanbe.

However, we needed one extra person before we could leave with a full car. Whilst we were waiting, Winny started taking random pictures of our surrounding. Suddenly a border guard with an AK47 walked towards Winny and demanded Winny to hand over the phone. He said that we couldn’t take any photos around the border and started deleting photos of what he considered as illegal and handed back the phone.

We finally left the border at 11 am. We later realised that both men sharing the ride with us came from Panjakent. They could have just taken a 5hr ride into Dushanbe if the mountain pass road wasn’t closed. Now they are on an 11-hour journey with us.

This 11-hour journey was quite gruelling. Because we left so late, we hardly made any stops beside toilet breaks and refuelling. Majority of the cars in Uzbekistan runs on natural gas. This is probably due to the abundance of natural gases around the area. However, they had a weird rule that all the passengers had to get off the car when refuelling and I are guessing that this is due to the risk of car explosions in the past when cars were not as safe? At some refuelling stations, we were high up in the mountains and we were freezing every time we hopped off the car. Winny kept saying that she felt that she was in Siberia. 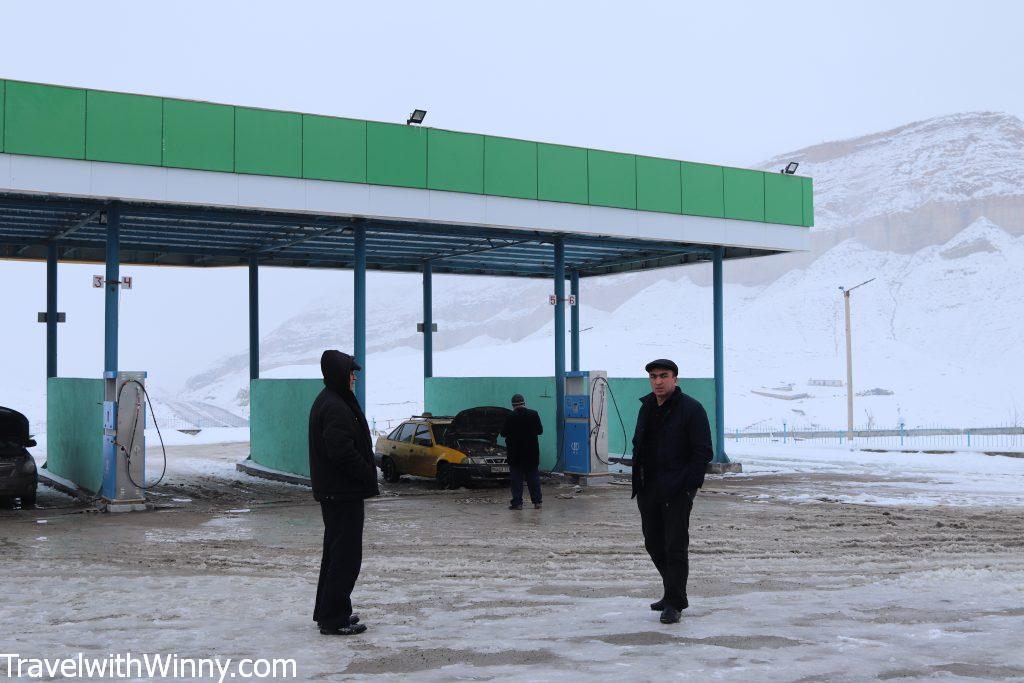 Refuelling with Gas. We all had to step outside into the cold every time they refuel.

Towards the end of the night, we had to turn onto a more mountainous road and the fog was so thick, we couldn’t even see more than 10 meters in front of the car. At 8:30 pm we finally arrived at the border. We were quite impressed with our driver driving such long distances with lousy quality roads and mediocre quality cars. Their pay was quite terrible in contrast to how much food cost in Uzbekistan. USD$55 for 11 hours of driving, 450km of terrible road is a bargain for two of us. Another interesting observation during this trip is that all the drivers and passengers in Uzbekistan will cover their face in prayer before we started our journey. 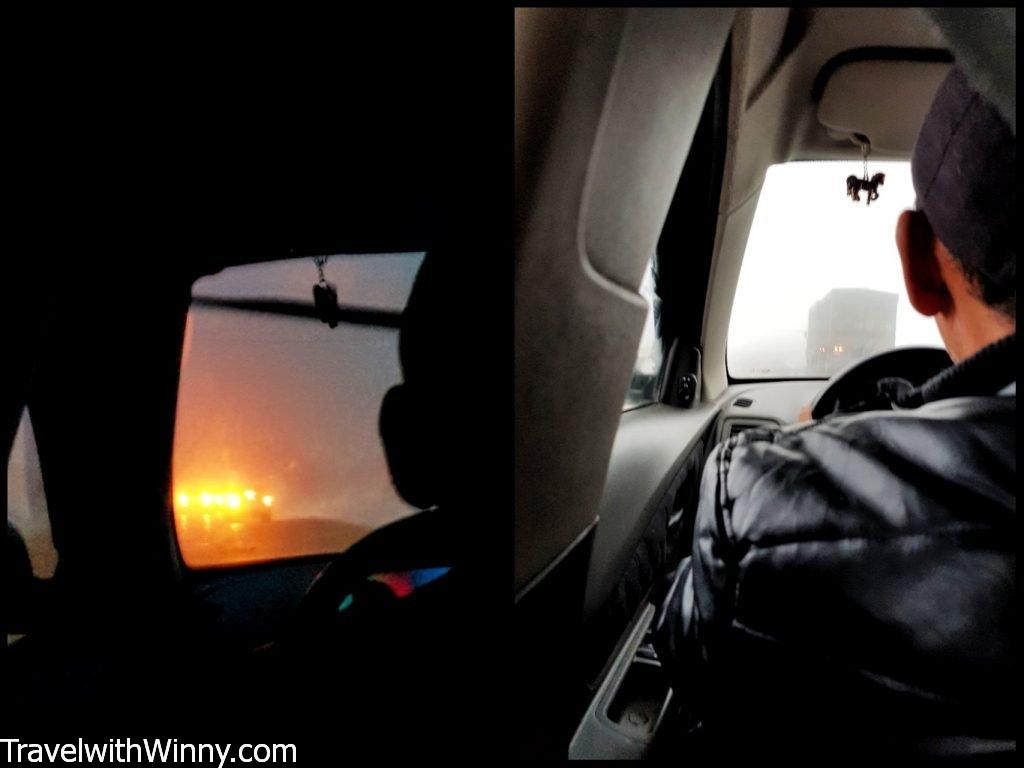 Driving in poor visibility in the mountains for hours.

After crossing the Tursunzoda border, we were in Tajikistan finally. Even though we couldn’t communicate at all, the older passenger viewed us as his companion now. He made sure that we weren’t overcharged on our next leg of travel into Dushanbe. After heated debate, he negotiated USD$2.50 for each of the passengers, otherwise, it is usually USD$5 for tourists.

This taxi ride only took us to the edge of Dushanbe which is at least 13km away from our accommodation. Fortunately, the other passenger, using very basic English and hand gesture indicated that his friend who is picking him up will drop us off at our accommodation. We felt that we could have made some true friends on this trip if we could have spoken in each other’s languages. 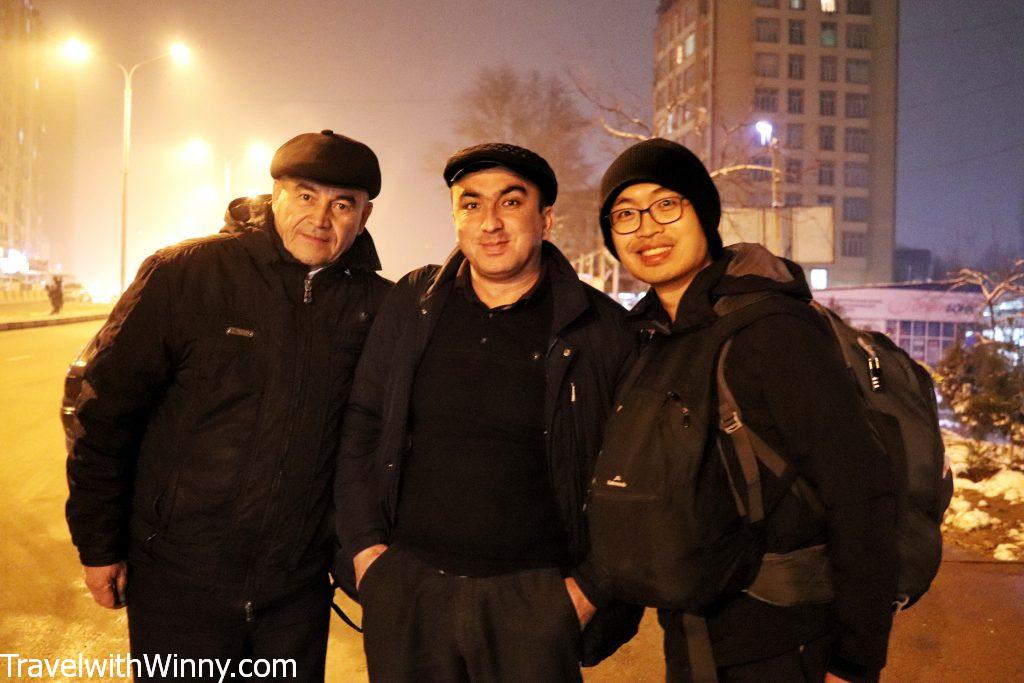 Finishing our 11 hour Samarkand to Dushanbe journey together we became comrades.

After arriving at our hostel- Green House Hostel, the receptionist told us that the mountain pass road opened two hours after we left. If we have waited at 1 pm we could have arrived in Dushanbe at around 6 pm rather than 12 am. But we couldn’t have ever known that. Also, the mountain pass snowed again that night and was closed by the next morning.

Dushanbe at night waiting for our friend’s friend to pick us up.

We were glad to be in Dushanbe. It’s a big city with all the amenities, good and cheap food and convenient public transport system before our 5 days Pamir Highway adventure in -50℃. That’s our adventure travelling from Samarkand to Dushanbe through the Tursunzoda boarder. Hope this story will help others requiring to go through this same route.

If you enjoy this blog, don’t forget to follow us on IG @ travelwithwinny and see more of our travel stories! Or follow our Facebook page @ Travel with Winny.