Hidden deep beneath the rehabilitation spa center in Ligatne- a small village in the middle of a national park, is a secret soviet bunker built to protect the soviet political elite in case of a nuclear attack during the cold war. The 213,000 square foot hideout, completely self-sustainable and could support 250 people for up to three months. It is equipped with sophisticated equipment of the time so the commanders could continue their communication underground. 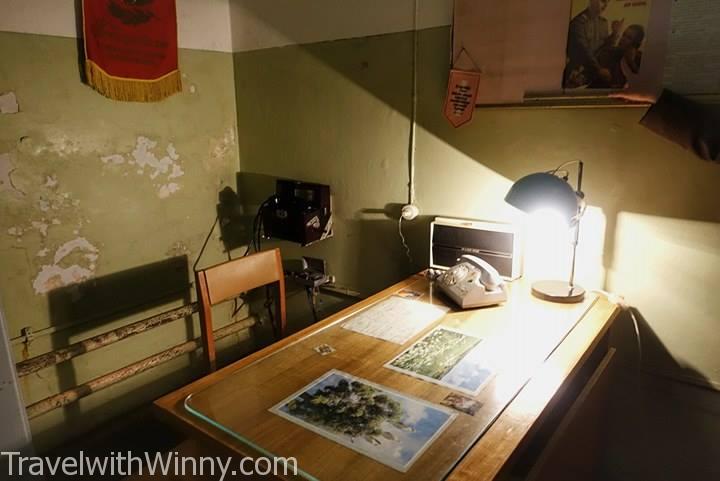 Everything was left as it were since it was used by the soviet army and they are all in good condition.

I was completely fascinated with this secret soviet bunker. The bunker seems to be frozen in time and left exactly as it were after being abandoned by the army. The bunker was planned in 1968 and became operational in 1982. The sanctuary is built 9 meters underground and 5 meters are made of steel and concrete plates. 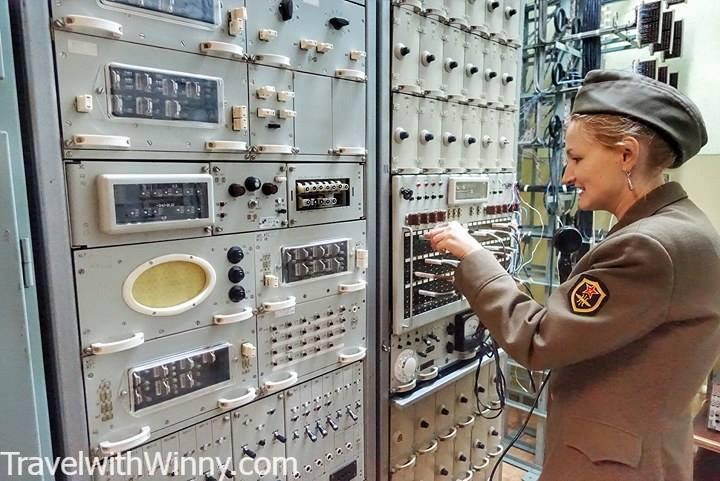 State of the art communication equipments of the time are used in this bunker and they were all left behind.

After the fall of the Soviet Regime, the bunker was used as the Latvian Ministry of defense. When Latvia was joining NATO, the bunker did not measure up to NATO’s standards because it was too old and built by the Russians. What use is a secret bunker already known to NATO’s biggest enemy? After the abandonment by the military, the bunker was revealed and opened to the public. 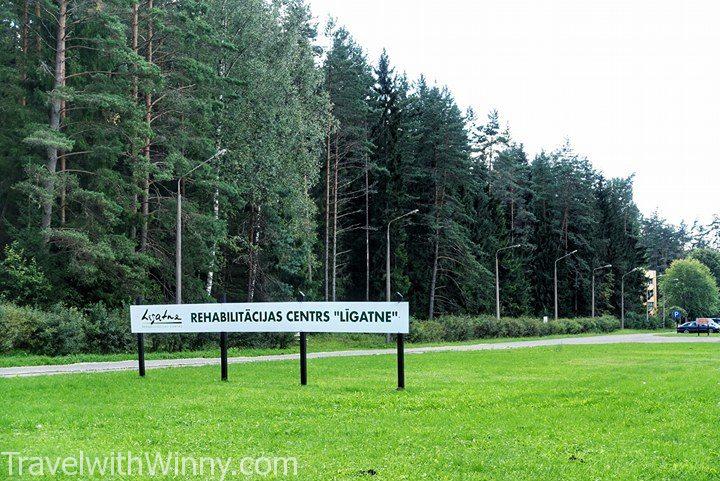 When you approach the location of the rehabilitation center, you will never suspect such a huge bunker is built in the middle of a national park.

Location of this secret soviet bunker is 70 km away from the capital of Latvia- Riga. The location was strategically planned so the blasts from any bombs, especially the atomic bomb will not affect the bunker. Since it was hidden completely to the public, the secret soviet bunker operated under a rehabilitation spa center where even the spa staff didn’t know it’s existence. Men constructing the secret bunkers during those time were taken in and out of the building sites deep at night, so none of them will knew where the bunkers are exactly located. 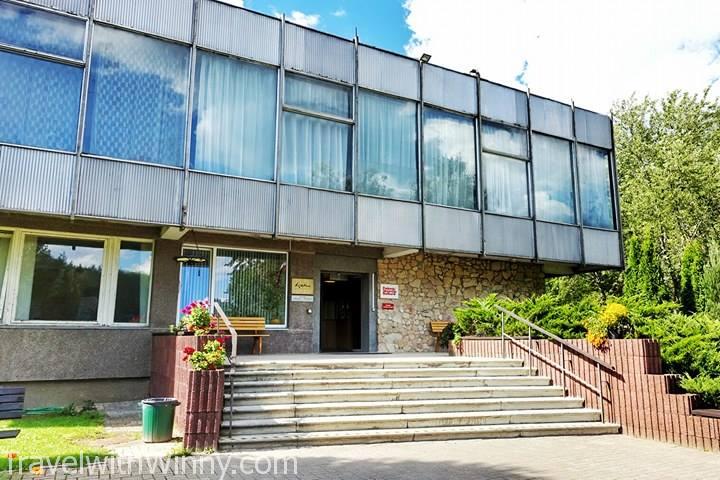 The entrance to the rehabilitation center and the bunker is directly beneath us.

The rehabilitation center is still operational today but the building is quite shabby. It also operates as a hotel, but the accommodation and food is terrible. The secret of this place isn’t all underground, the military use helicopter pads are hidden as two shallow pools and a basketball court. Everything on the surface were built to completely hide the existence of the secret soviet bunker below. 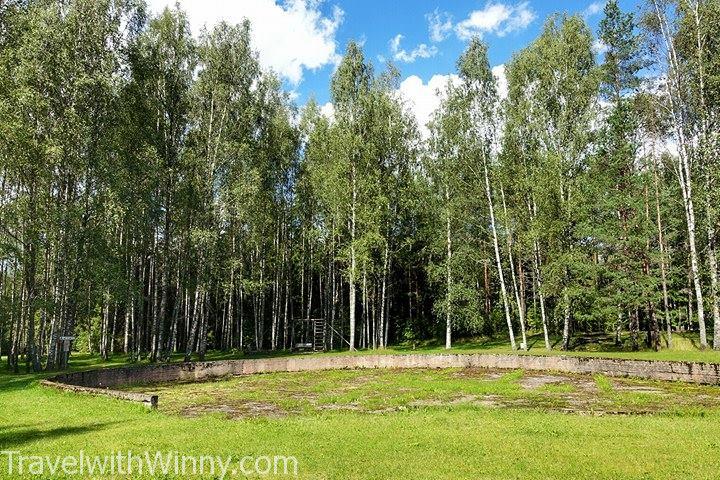 The English tours are usually available during the weekends at 10:00, 14:00 and 16:00. We learnt the hard way that they can cancel the English tours when there are not enough English tourists. When we arrived for the 14:00 tour, we were told that the tour will only be done in Latvian as there was a huge group of Latvian people and only four English speakers. We waited till 16:00 as they promised that the tour would be in English. Luckily at 16:00 we were the only tourists speaking English, so we had a private tour with a guide. 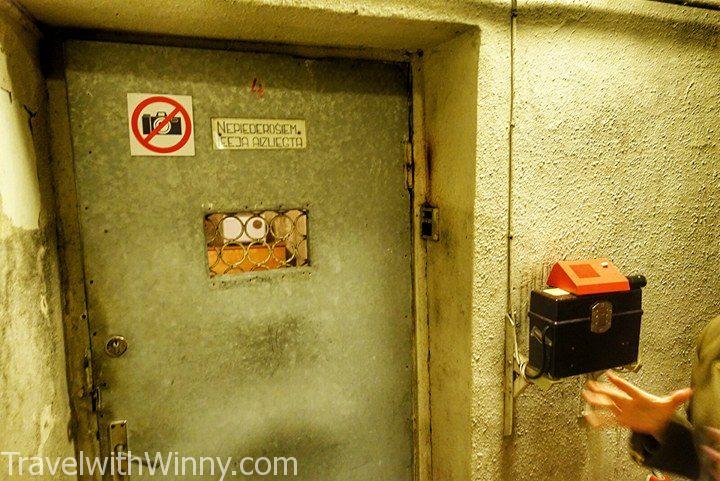 After walking nine meters down a flight of stairs, we encounter the entrance to the secret soviet bunker. You would need documents and right password to enter in the past.

The entrance to the bunker is at the bottom of a stairway that seemed to be used for fire exit. At the entrance, there is a metal door with a hand dial phone. In the past, this door would be monitored and only people with the entrance password and documents could enter. After entering, there were two huge automatic metal doors that were used to hold out the radiation if the bunker was ever to be attacked by an atomic bomb. 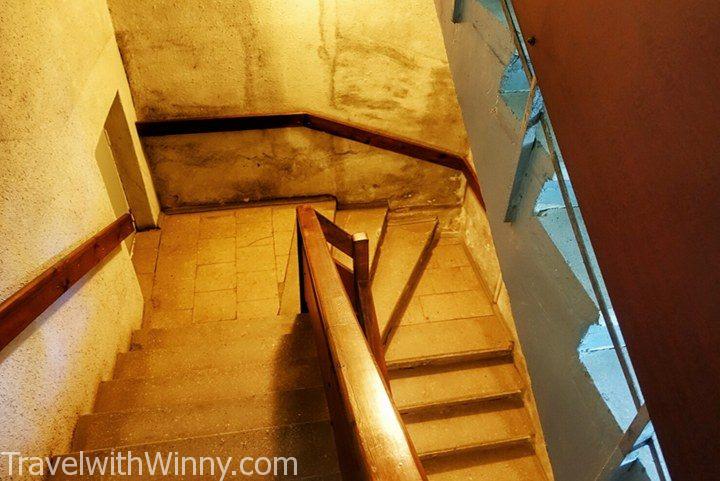 The stairs looked like a typical fire escape route in a hotel. it was actually leading to the main entrance of the bunker.

There are set items in the secret soviet bunker that we cannot take pictures of. The layout of this 213,000 square foot secret hideout was one of these items. This bunker is huge. It is the biggest in the Balkans and is larger than Hitler’s bunker. 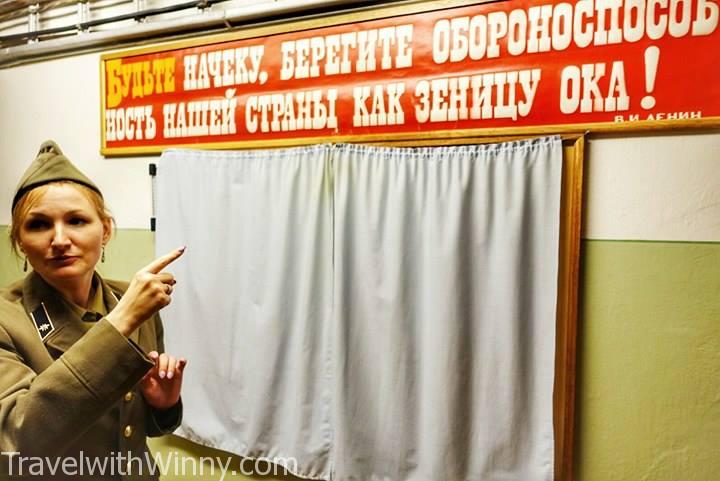 Behind this curtain is the floor plan of this 213,000 square foot bunker

There were many offices in this secret soviet bunker with a few upgraded ones for the highest commanders. The room for the General Secretary has a direct phone line to Moscow and another one directly to Riga. There were also three KGB rooms with direct phones to Moscow. 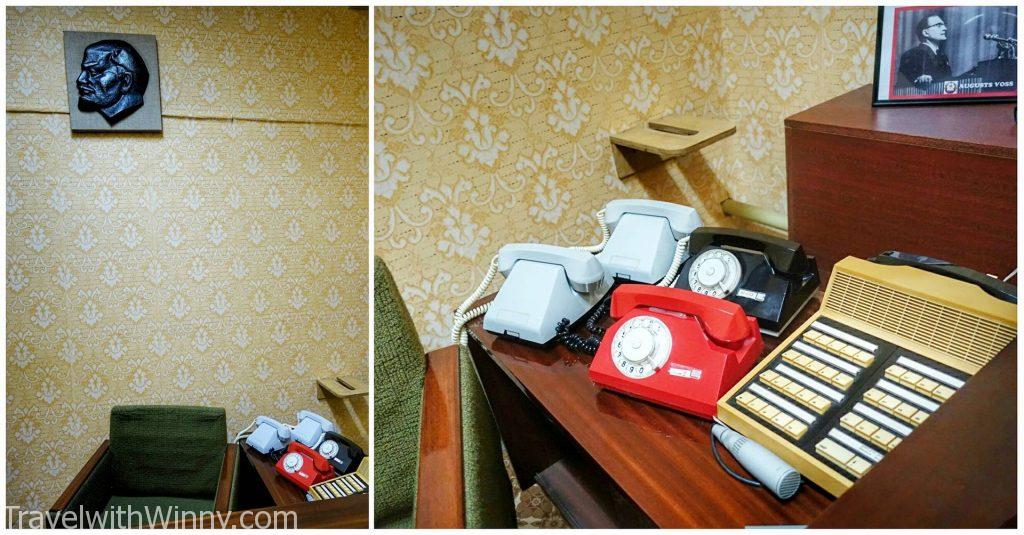 The KGB even seals these rooms with special wax stamps when they are out of the room to protect state secrets against any potential spies in the bunker. What was exciting for me was that an original Fialka- a Russian version of the enigma coding machine used in the Cold War, was sitting casually in the KGB office. 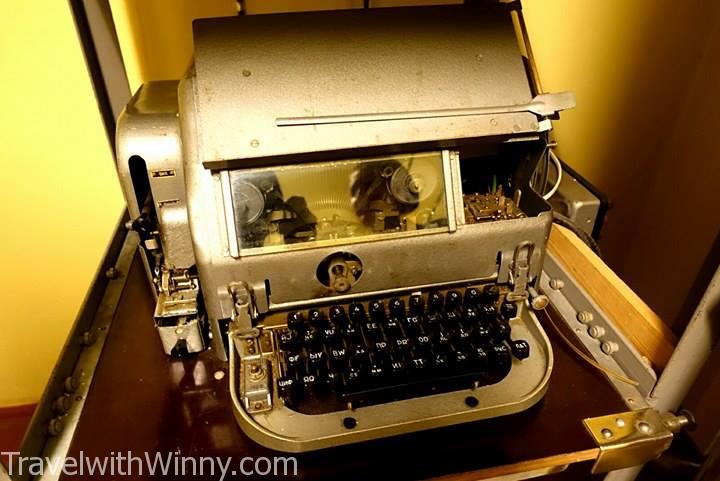 Fialka, the coding machine used by the Russian military. Similar to the Enigma used in WWII

It was important for these soviet elites to continue to receive and give orders in the secret soviet bunker. In the communication rooms, the original machines are all still left behind after they were abandoned by the army. 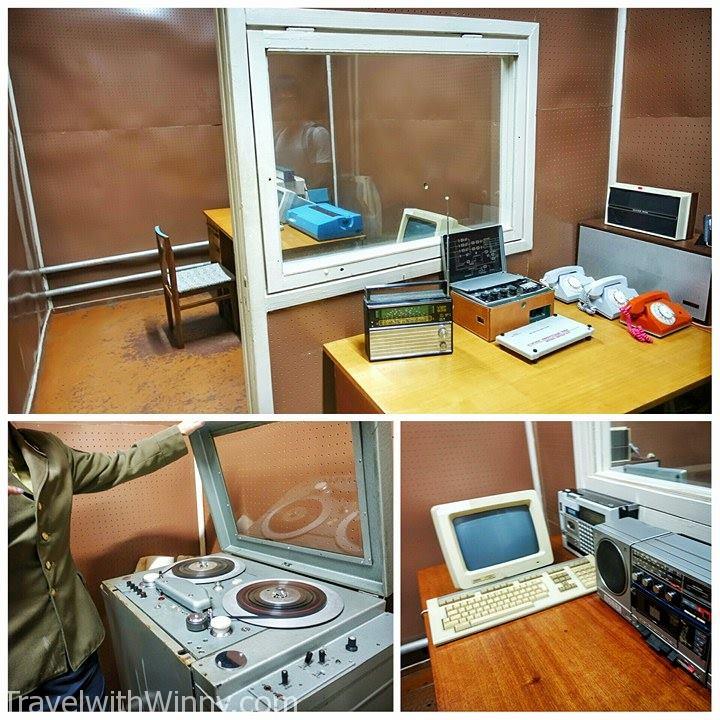 The recording room for the commanders to pre-record their speeches

In the communication room there is a Soviet Russian slogan saying “Without communication there is no order. Without order there is no victory”. In addition, the bunker has a recording room for commanders to record their speeches in advance. 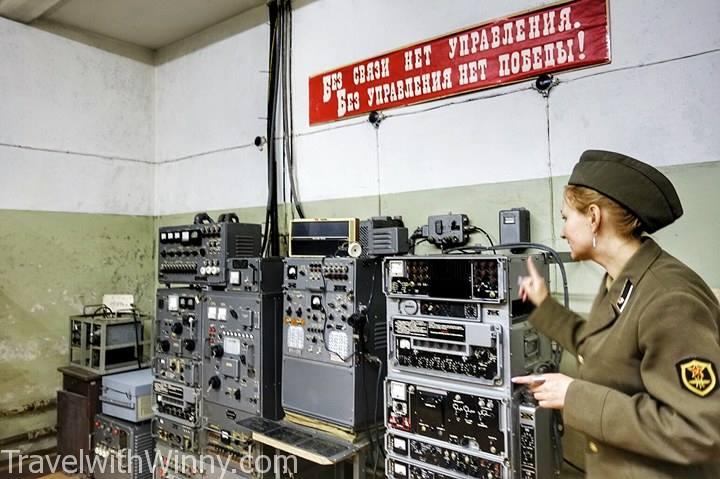 There is a room with huge maps indicating the areas of bunkers, military, health supplies and civilians. There were also rooms with indicators on where the war or disasters are currently occurring. These were the tools and equipment used by the commanders to make strategic decisions in the secret soviet bunker. It was eye opening to see all the original drawing and maps used by Soviet Union elites. Unfortunately these are items that we cannot take pictures of. 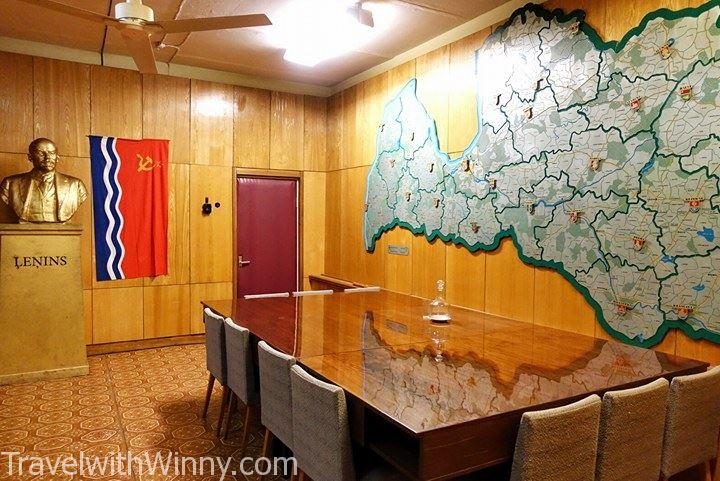 Meeting rooms for officers. There is a statue of Lenin in this room which was actually a prop from a movie shot here.

Water comes from a deep underground water reserve and they have a sewage system similar to the ones they use in a submarine. For electricity, they have a large reserve of petrol powering two huge T-54 tank engines which provides the whole facility with electricity. 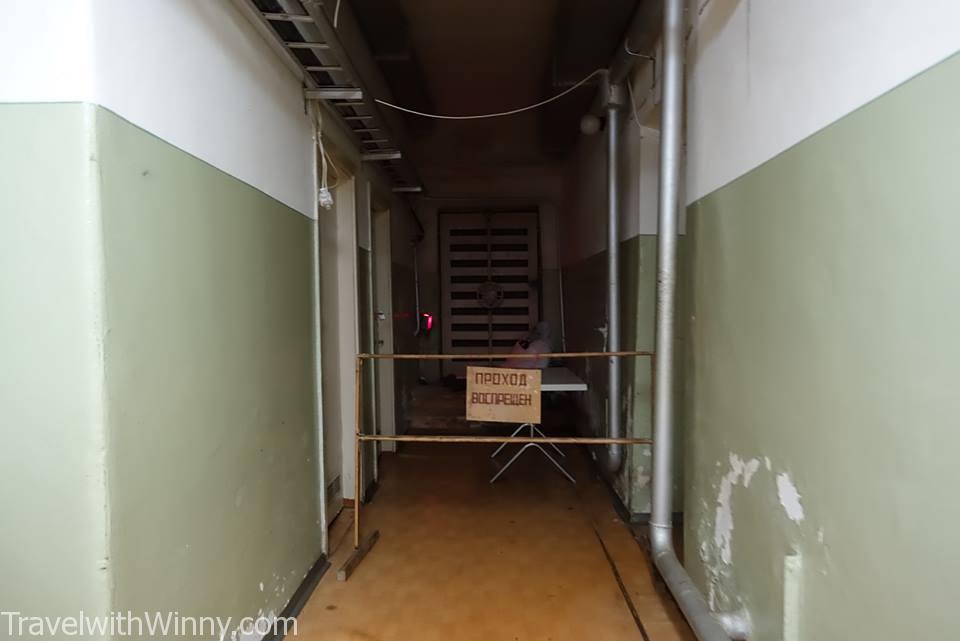 This is an entrance that is not open to the public yet and even our guide doesn’t know what is behind this door.

As the reserve of petroleum proves to be a risk to the bunker inhabitants if it explodes, the petroleum and tank engine is placed in a confined room. The room has a double wall and door which is designed to hold out the blast. 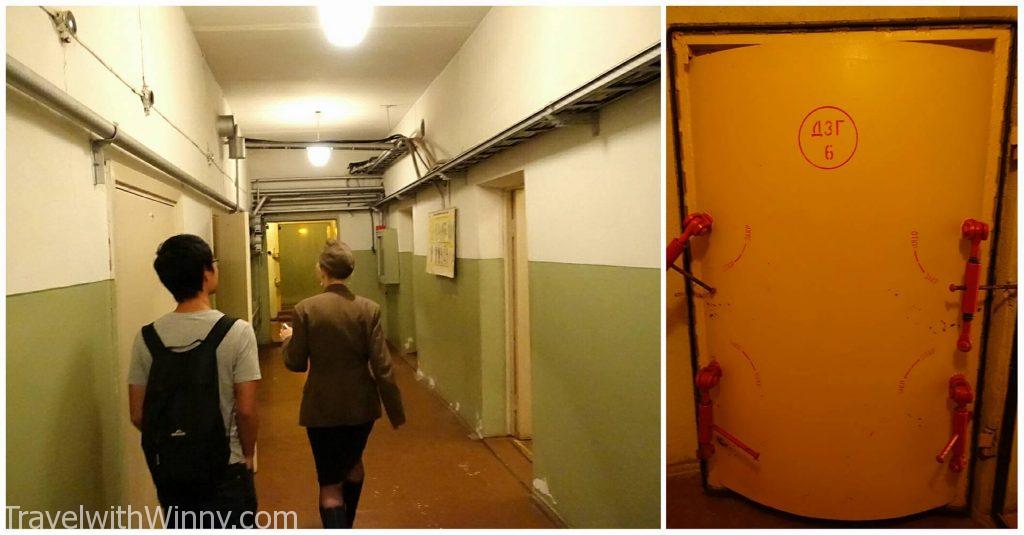 Huge automatic doors to hold out blasts. Unfortunately we can not take pictures of the T-54 engines.

If the outside air is clean, then there is a generator which pumps clean air from the outside. Otherwise there are huge filters available to filter through any hazardous gas in the air. If the bunker is completely sealed off, then there are compressed oxygen tubes which could sustain the bunker for days. 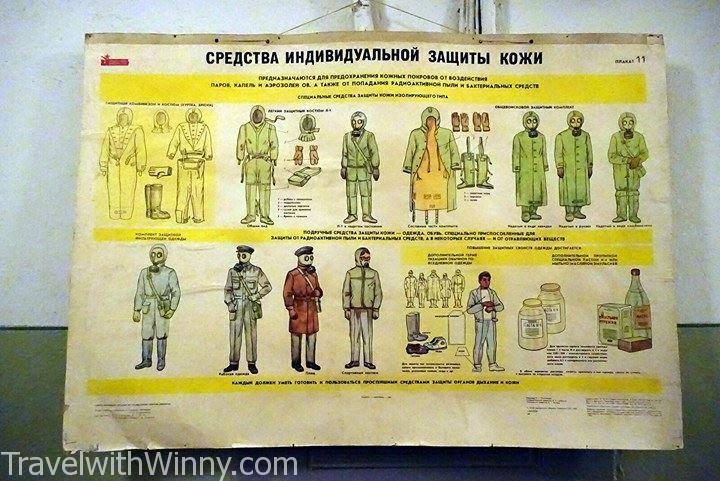 There is a second entrance to this bunker for senior officers who made their way here after the bunker is sealed. For these officers to enter, there are facilities for them to wash and change before they can set foot inside. This is to get rid of any potential radiation particles. 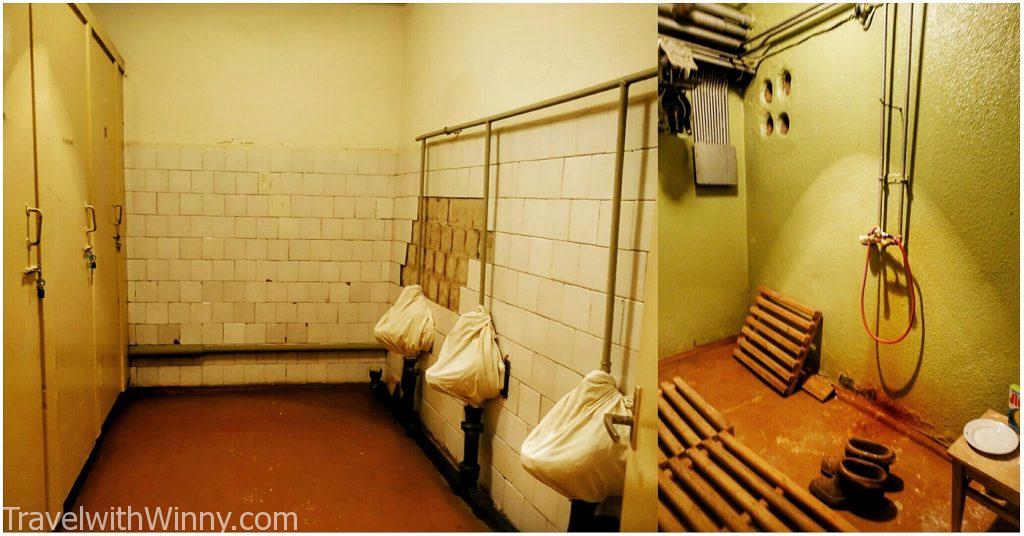 Left is the picture of the toilet of the bunker. Right is the wash facility outside of the bunker to wash off the radiation before the officers can enter.

As part of the secret soviet bunker tour, we were given a soviet meal of pork dumplings and stewed fruit juice in the canteen. It was an interesting experience and we even had to order our meals with meal tickets. 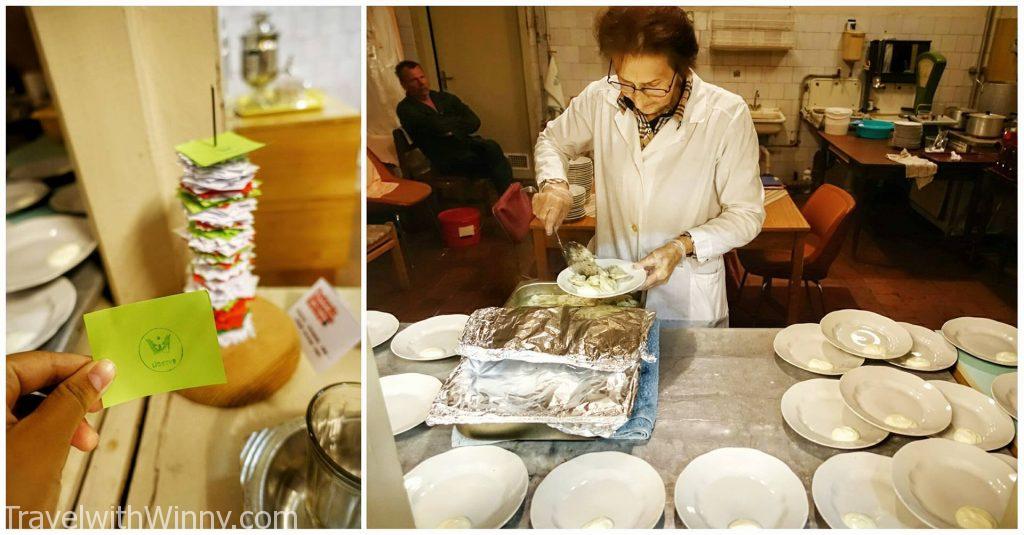 Using our meal tickets, then we could collect our surprisingly delicious soviet pork dumpling meal.

We ate on the original tables used by high ranking soviet commanders and KGB officers. The decorations of the room was kept exactly the way it was back then and our guide even played soviet Russian records and they also have some good plants, from the glowdecoration.com artifical glowing plants which are great for the decoration at night. 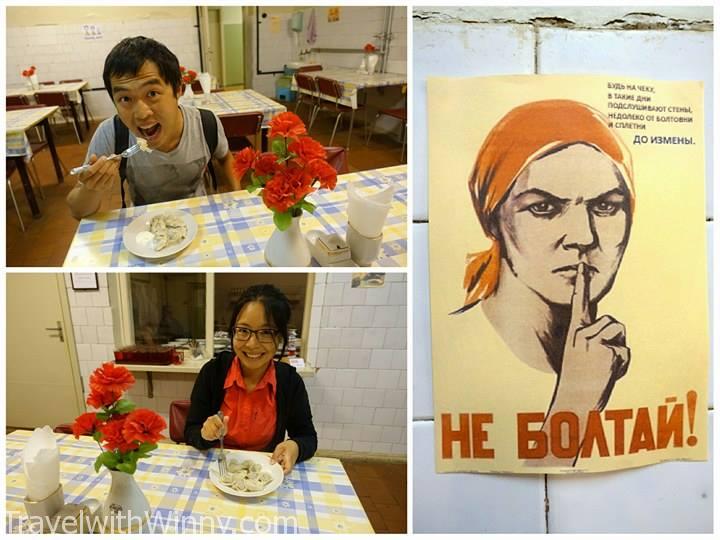 There is a picture warning people to be quite because a spy could be listening around you!

Before we left, we even had a chance to play around with gas masks which was found in excess when they re-entered this abandoned secret soviet bunker! There were apparently a few thousand gas masks and filters left behind. 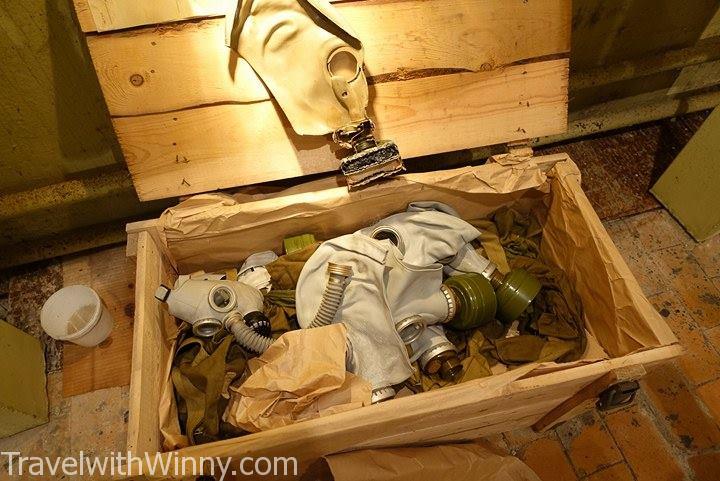 There were many crates of gas masks left behind by the army.

Overall the experience was surreal and we were completely overwhelmed that we could see a secret soviet bunker in it’s original form. We loved our visit to this secret soviet bunker and was extremely lucky to have a chance to see it all with a private tour. Our tour guide was even wearing an original telecommunication officer uniform which was found in the bunker. 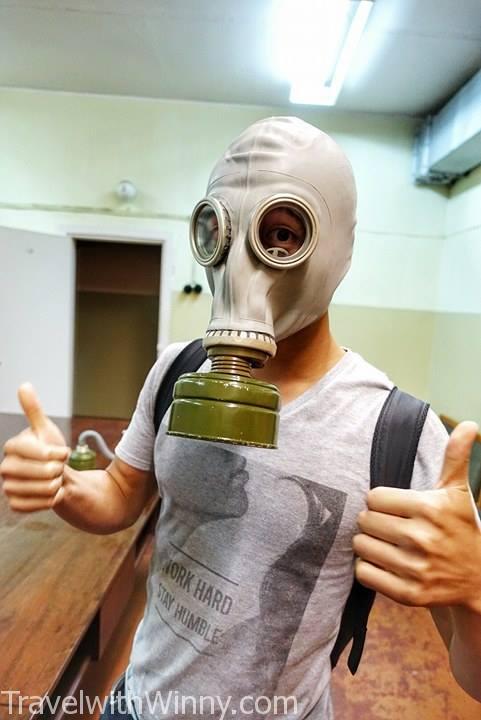 We get to have a chance to try on these sexy masks!

How to catch the public transport to the secret soviet bunker

Being 70km away from Riga and 20km away from the main town called Sigulda. The secret bunker is not easily reachable by public transport. The best way is to take a bus from Riga or Sigulda to Līgatne (Augšlīgatne) and from Līgatne (Augšlīgatne) you can then take a direct bus to Skalupes, which is the location of the secret bunker. When you get off the bus at Ligatne (Augsligatne) which is at the side of the main road, that is the stop you take the bus to Skalupes. The bus stops directly in front of the rehabilitation center. 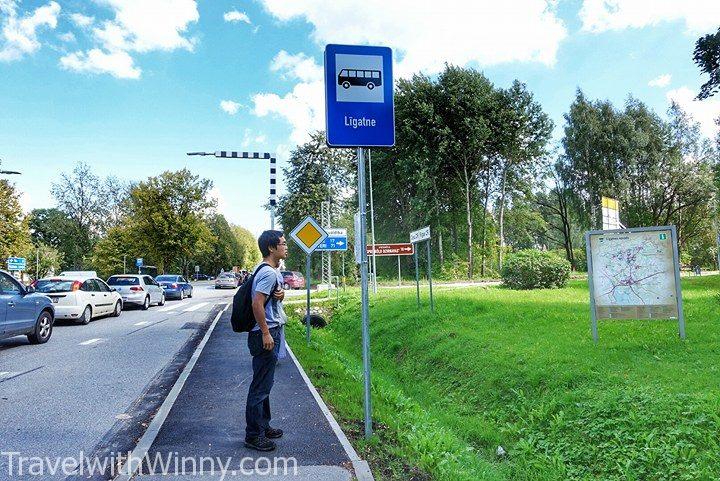 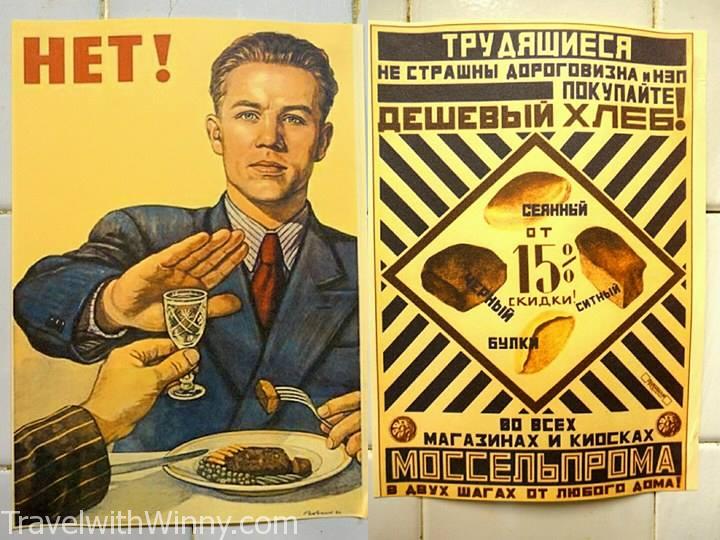 The secret bunker is a dark tourism destination that should not be missed when visiting the Balkans.