Greek cuisine is essentially Mediterranean cuisine which is known to be one of the healthiest diets in the world! Food in Santorini is no different. They are in abundance of olive oil, herbs, lemon juice, vegetables, fish, wines and various meats. 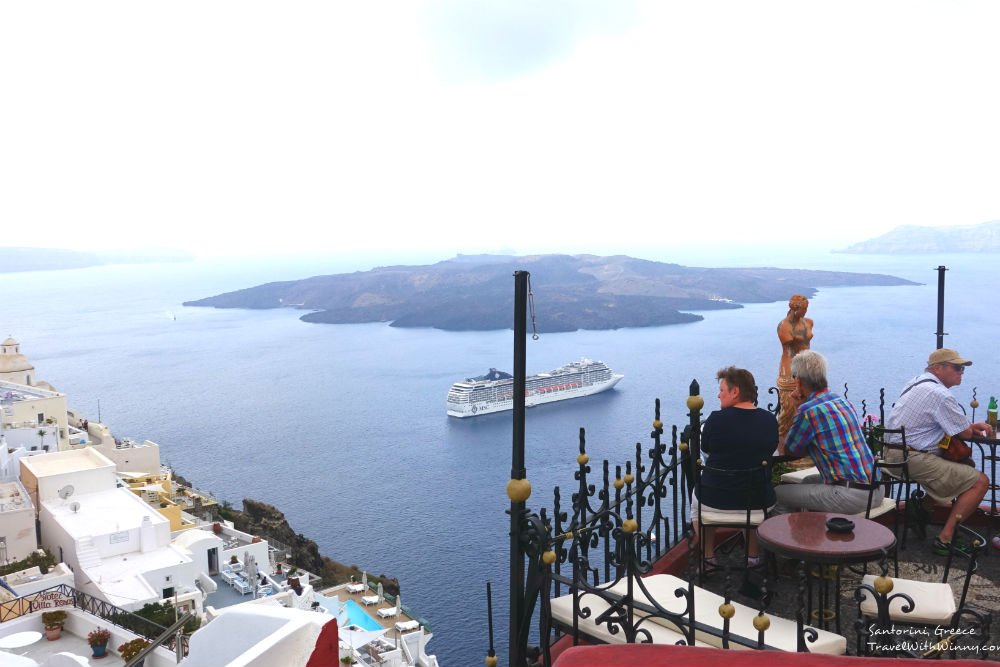 Bucket list for many: Enjoy great food and wine while looking over Santorini caldera.

There is a large variety of food in Santorini. However compare to Fira, the restaurants in Oia mostly serves Mediterranean cuisines. With a hefty price tag, you can eat or drink with a beautiful sunset view in a restaurant on the caldera. To save money, the best way is stay away from beach-front locations and find somewhere to eat in the side-streets. 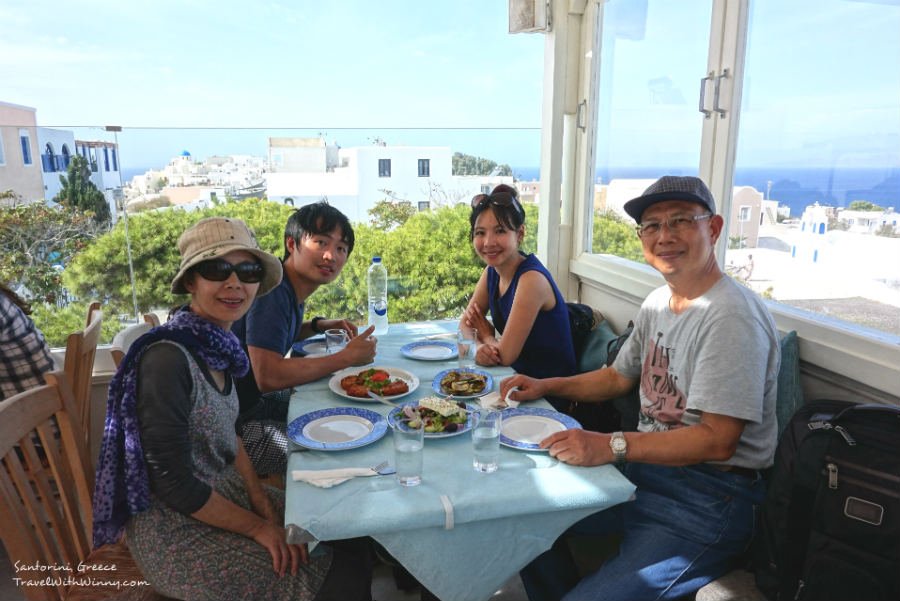 Note: People have reported that food in Fira is better than Oia, we only dined in Oia so couldn’t compare. However I must admit most restaurants in Oia with a view, the food were just okay. Below is a list of food in Santorini that can’t be missed, but of course the quality will vary between restaurants!

One of the most common food in Santorini is the “Greek Salad”. They will appear on every menu of a restaurant. Traditionally Greek Salad is made of pieces of tomatoes, sliced cucumbers, onions, olives and feta cheese. Seasoned with oregano and salt together with olive oil. 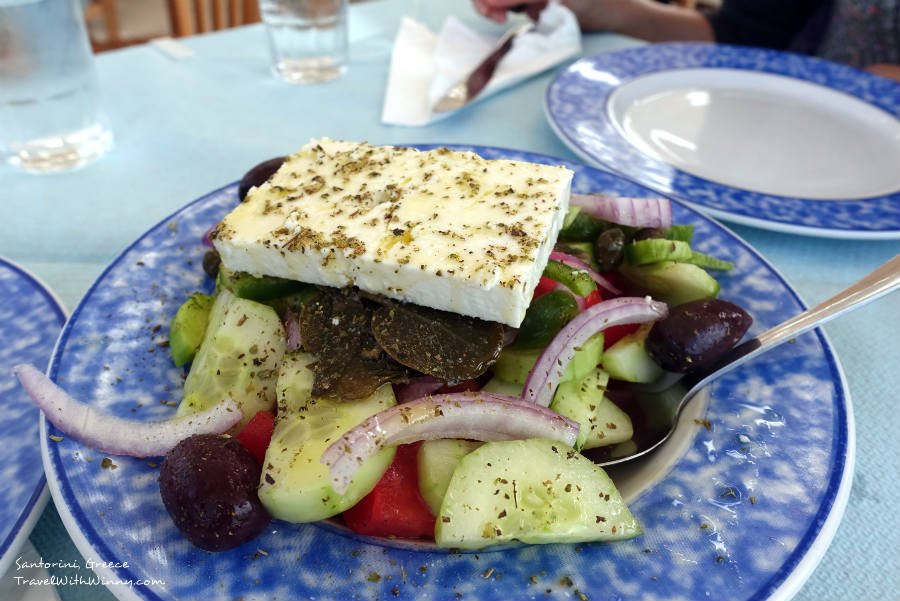 A “Santorini Salad” on the other hand includes all the main ingredients from Greek Salad as well as capers. All the ingredients used is grown locally on the island. Typically a restaurant will charge you extra €3- €5 for “Santorini” version of the salad. After ordering “Santorini Salads” for the few times, we couldn’t tell much differences between them other than capers. The produces used in Greece are usually quite fresh, so there’s no need to pay extra unless you are a capers lover. Some restaurants do have different recipes for Santorini Salad so it’s worth while to read the menu closely. 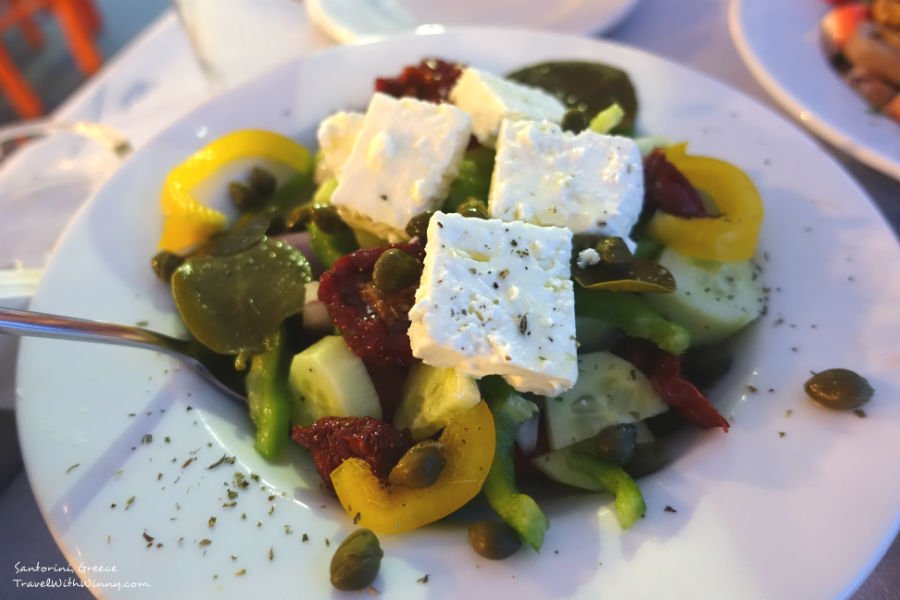 It is hard to differentiate the differences between Santorini Salad and Greek Salad unless you look at the ingredients used.

“Seafood is definitely one of the must-eat food in Santorini, as the island has a lot of fresh fish to offer”. That statement is only true if you dine in one of the taverns near the Port. The rest of the restaurants we dined in caldera were simply not that good. 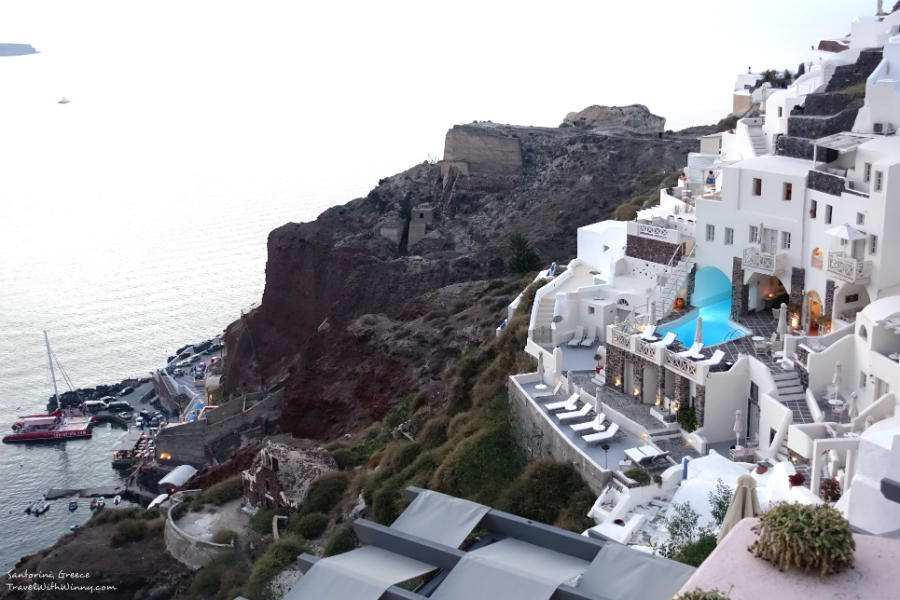 The steps you need to take to go down to Ammoudi Port at the bottom of the island.

Taverna Katina is one of the five taverns at Ammoudi Port located on the north-west tip of Oia. We choose this tavern because its was quoted the best seafood restaurant in Oia and the fish they had looked the freshest that day (you are able to inspect the fishes before dining in a tavern). 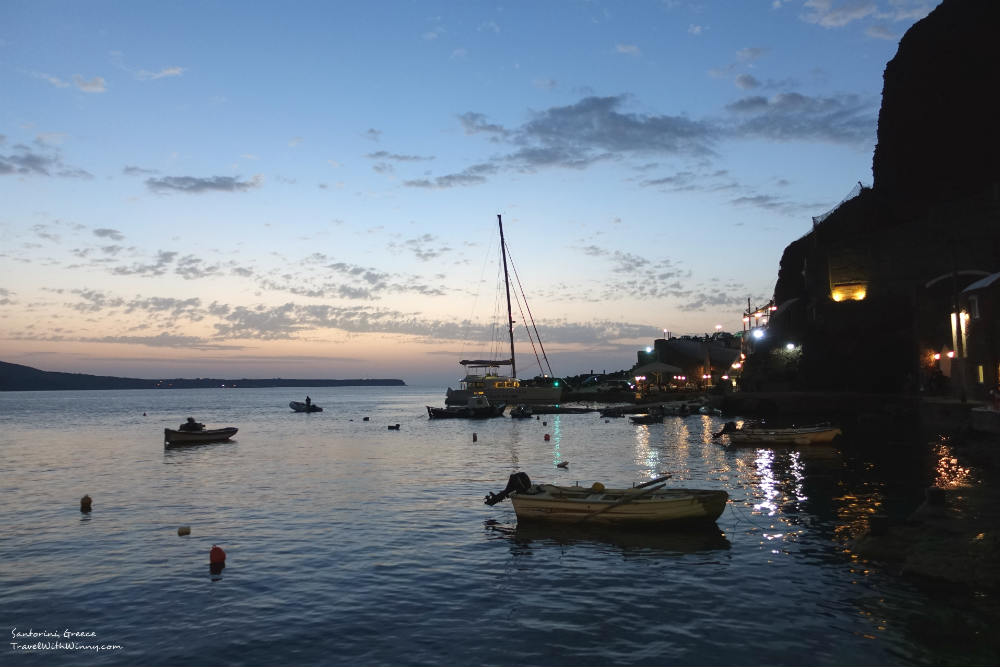 Dinner view at Ammoudi Port is breathtaking. The ocean was so calm. It was magnificent.

Mediterranean grilled fish is one of the best in the world. With some seasoning, the flavors will be well retained and it’s mouth-watering. Unfortunately my parents didn’t like the idea of grilled fish (they had bad experiences in Japan where grilled fish = dried up fishes), so we had the chef made our fish into a soup. All the fishes were measured in kilos and had to be a whole fish, our fish soup ended up to be €62. 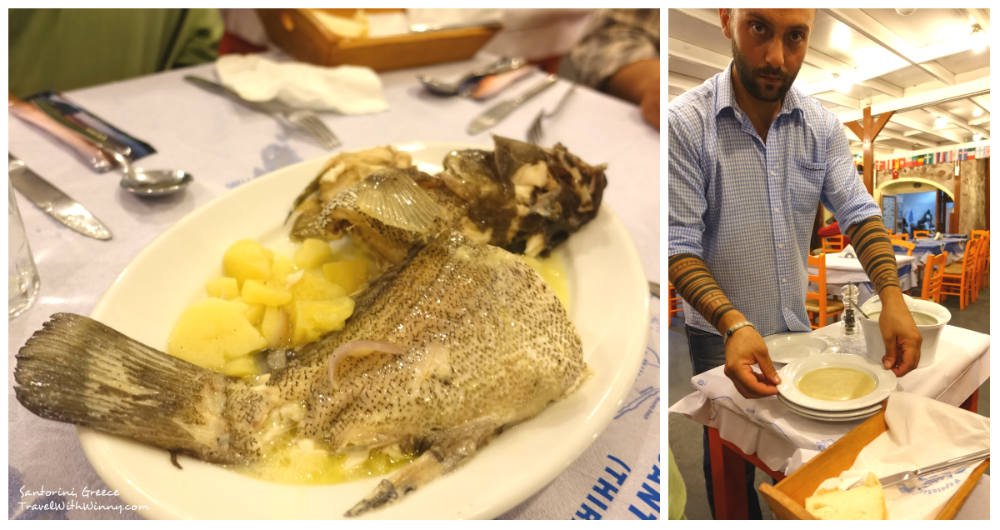 Despite the fact we didn’t order grilled fish, the fish soup was delicious as well!

Do not let the word “calamari” fool you. The calamari in Greece does not mean “squid rings”, these calamari are full squids, lightly grilled and seasoned, it tasted amazing! Probably the most bang-for-the-buck dish in Taverna Katina costing only €12. Apparently Europeans/ Americans are scared of the tentacles, that’s why most calamari you see in Western World are in “ring” shape. Grilled calamari is also the most fail-proof food in Santorini restaurants. 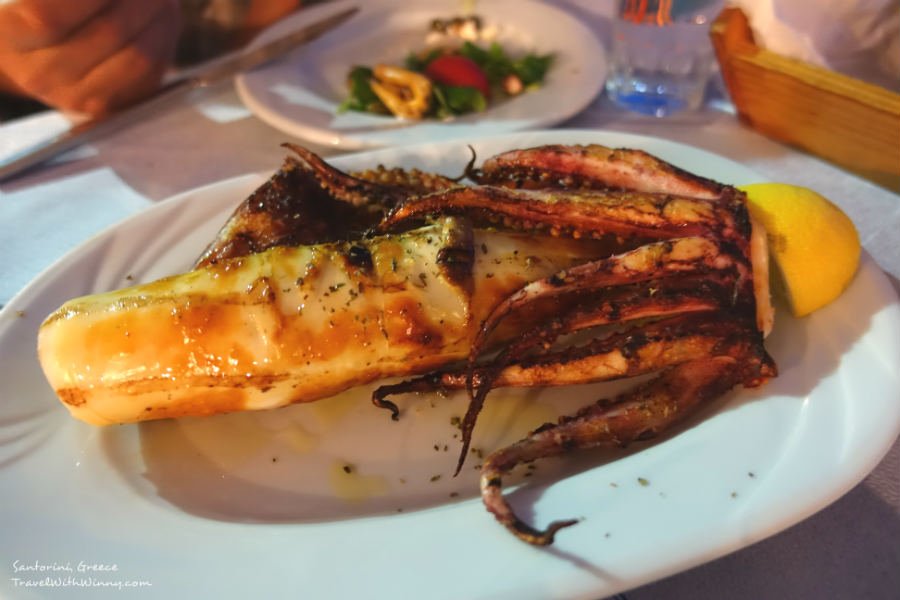 The grilled calamari in Greece was different to what I had imagined.

My favourite food on the menu was the grilled octopus. As the tentacles on the octopus were larger, it was more chewy than the calamari. Each tentacle costed €14 (?) at Taverna Katina and was plated on a dish sliced into small pieces. The octopus was surprisingly filling. 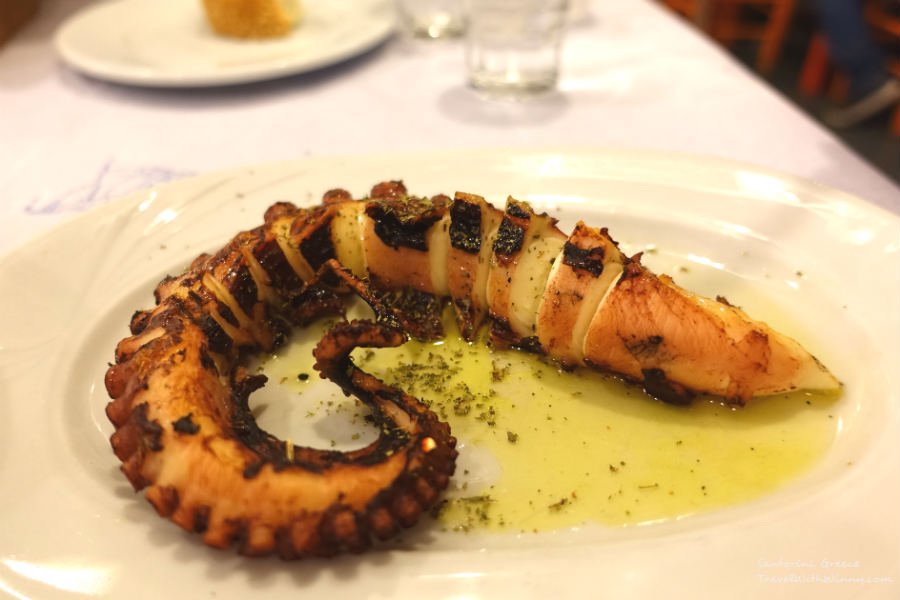 The grilled octopus was simply my favourite

One of the largest drawback about dining at Taverna Katina is its location at Ammoudi Port. You will need to go down and up about 220 steps each way in the dark to dine there at night. During the day there are donkeys transporting you back up, however at night there are no donkeys operating. There are no street lights too and you will need to either bring a torch or use your phone to light your way to avoid donkey dumps. Another alternative is to catch the cab but we never took this option. We quite liked the quality of food here and chose to dine here twice despite the difficulty of the climb. 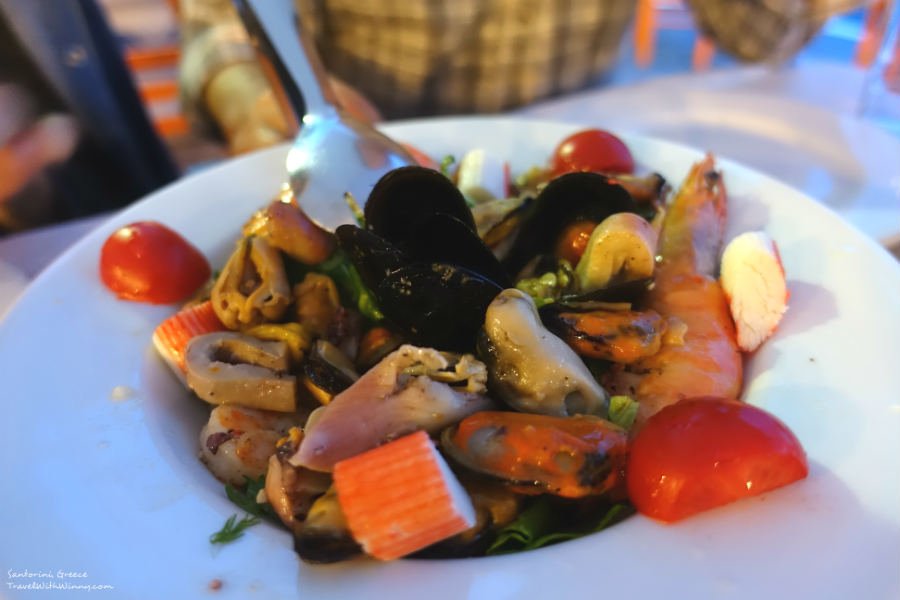 Seafood Salad at Tavern Katina was very worthwhile as well, unlike some other restaurants.

It is possible to find Greek Yoghurt in almost every super-market. They have been marked as a healthier alternative compare to normal yoghurt. It is true they are lower in calories and sugar, yet still packed with live bacterial cultures and calcium. They are a type of strained yoghurt which gives a thick  texture and sour yoghurt taste. We were given Greek yoghurt as desserts after our meal at Taverna Katina. It was delicious when mixed with honey. 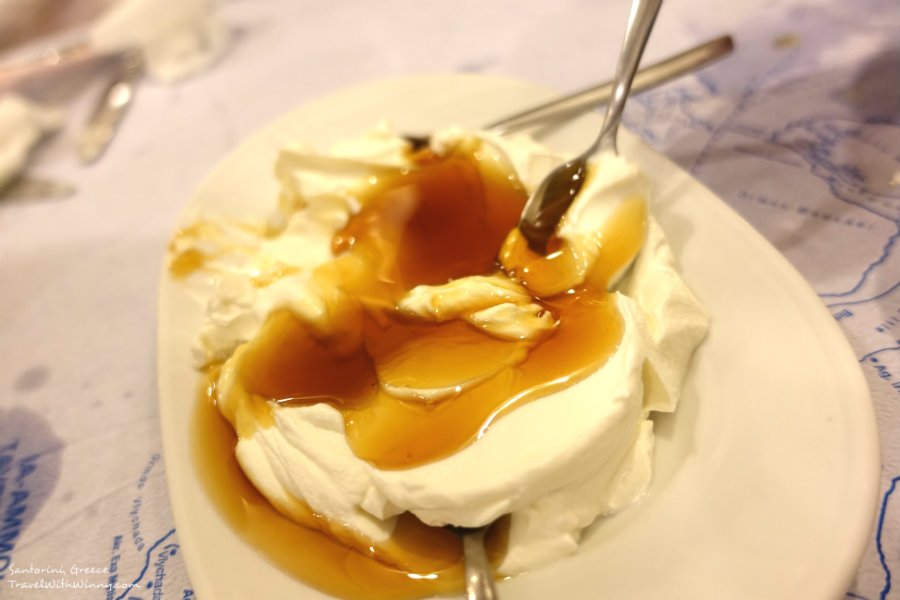 The best Greek Yoghurt we had during the entire trip was the complimentary dessert given at Taverna Katina.

We were also given packaged Greek yoghurt for breakfast during our stay at  “Zoe’s House“, however they tasted no different to other supermarket yoghurt off the shelf in Australia. We also tried Greek Yoghurt from ice-cream stores which wasn’t that much different either. 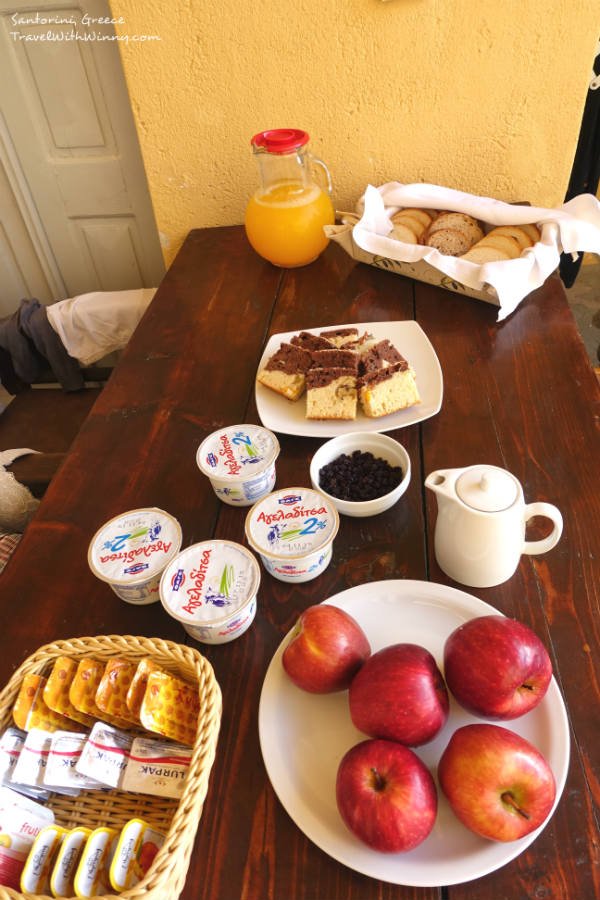 We were given “normal” yoghurt at Zoe’s House for breakfast. Tasted generic.

These two types of food for budget travelers. they are the cheapest type of food in Santorini that can fill you up. Although Gyros and Souvlaki are made differently, they use very similar ingredients and have very similar appearances and tastes. They are usually quite confusing for tourists to tell the difference. 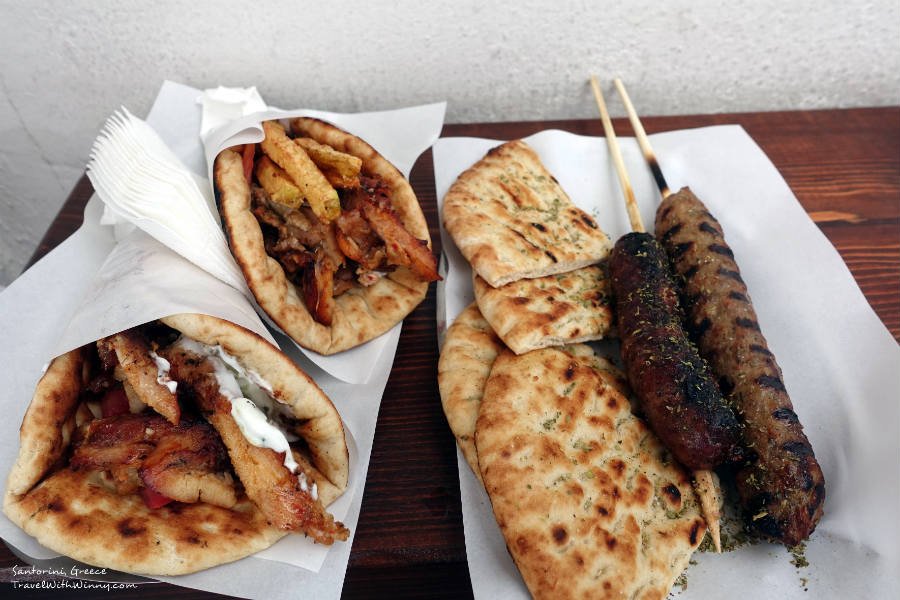 Gyro is a traditional Greek food where roasted meat, tomatoes, onions and sauces are added inside a bread to make it into a sandwich. Where as souvlaki is a Greek fast food where the roasted meat pieces are served on either pita bread or over a bowl of cooked rice with chips. The meats from Souvlaki are kept ready on a skewer and then given to customers. Where as the meat pieces on gyros are kept on the electric broiler and are sliced when needed to. 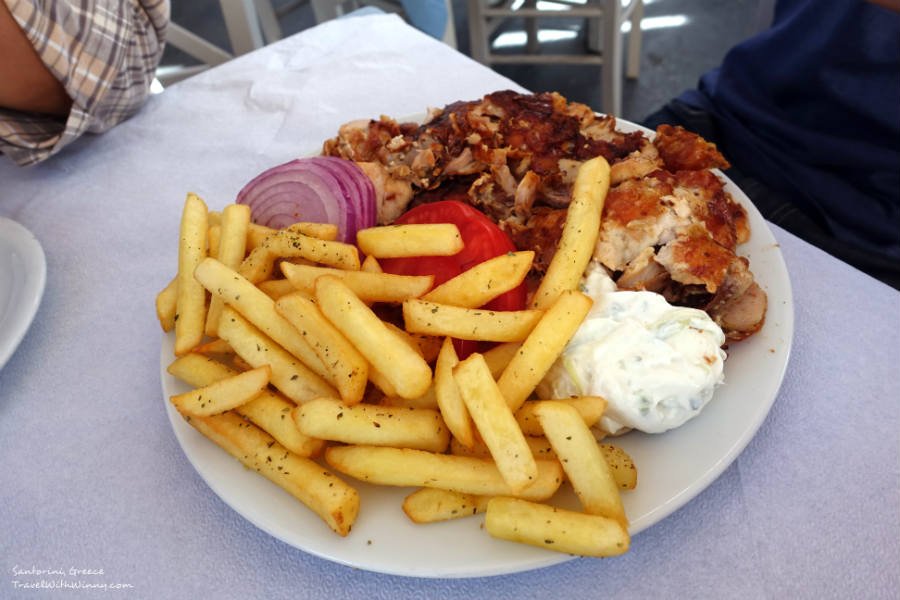 Our first souvlaki in Greece. Although the menu called it “souvlaki gyros”, by definition these two are not the same thing!

I find that shops in Santorini tends to use the terms gyros and souvlaki together on the menu, which is a bit ambiguous. We had a “souvlaki” on a plate which costed €8, compare to a normal gyros which was only €2.50 – €3.10. 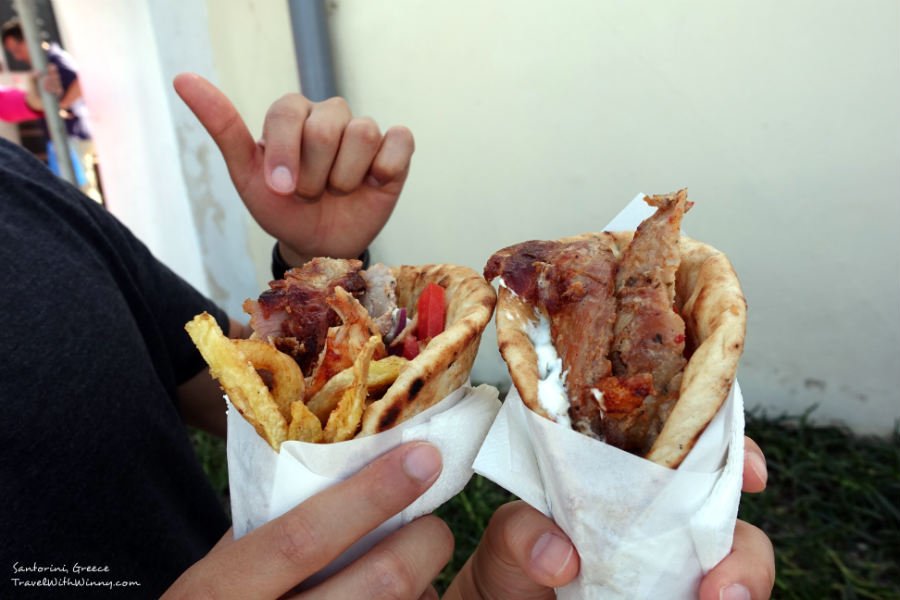 Delicious gyros at “Pito Gyros”. We had it for lunch everyday while we were at Oia.

I highly recommend people to go to “Pito Gyros“, it is definitely the best in Oia! We tried another gyros place “Nikos recommended by the owner in “Zoe’s House” and it was a total failure as it tasted worse than what we have in Australia. “Pito Gyros” was slightly more expensive (€3.10 per gyros), but it was definitely worth the wait! They also sell Greek beers, Greek salads and all the other traditional Greek food. Best food place ever! 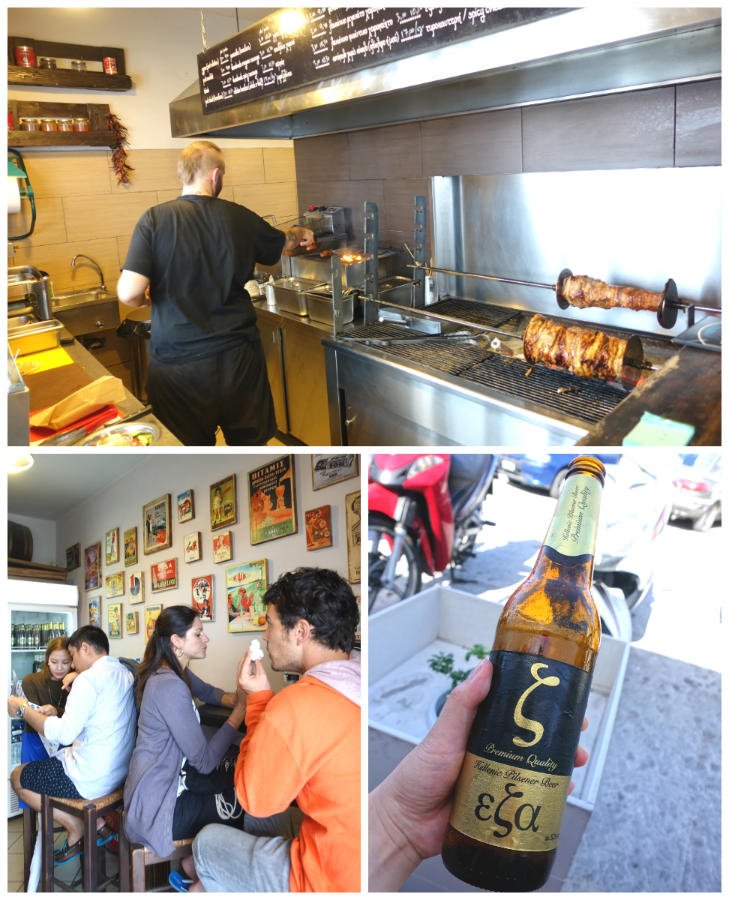 Even though the shop is small, there’s always a line of people waiting at any given time!

As Santorini is famous for their white aubergine (eggplant), one must try the layered Greek dish “Moussaka”. The base layer is usually slices of eggplant, middle layer is consisted of ground lamb cooked with tomatoes, onion, garlic and spices and the top layer then finished with white sauce. The whole dish is baked until the top layer is brown. I personally think the Moussaka tasted somewhat like lasagna. 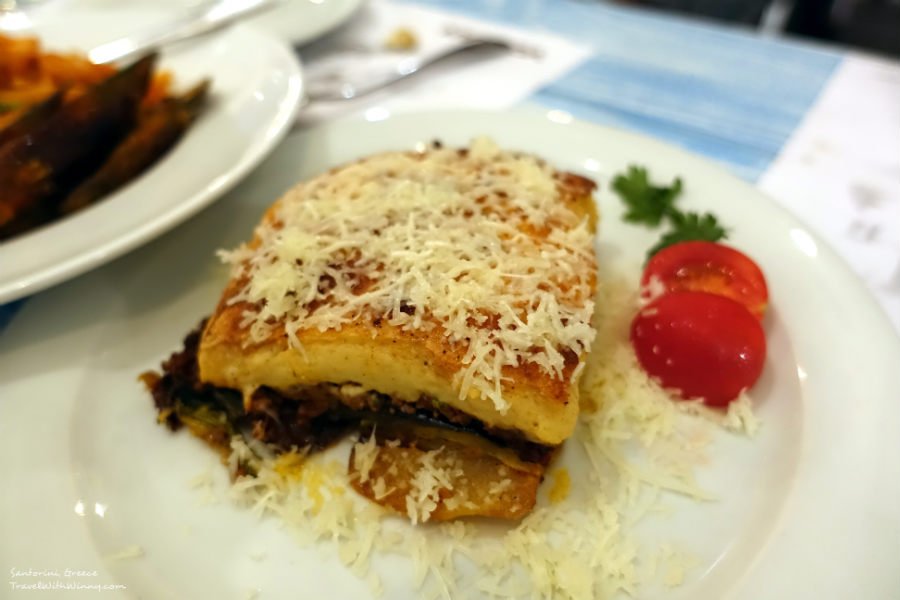 We thought the traditional Greek dish Moussaka tasted a bit like lasagna.

Since Greece and Turkey are neighbouring countries, the two countries influences each other in terms of cooking style. This is definitely reflected on their desserts especially the use of filo from both countries (eg. baklava). Feel free to read my previous blog “What to eat in Istanbul? (Desserts & Street Food)” to know a bit more about it. 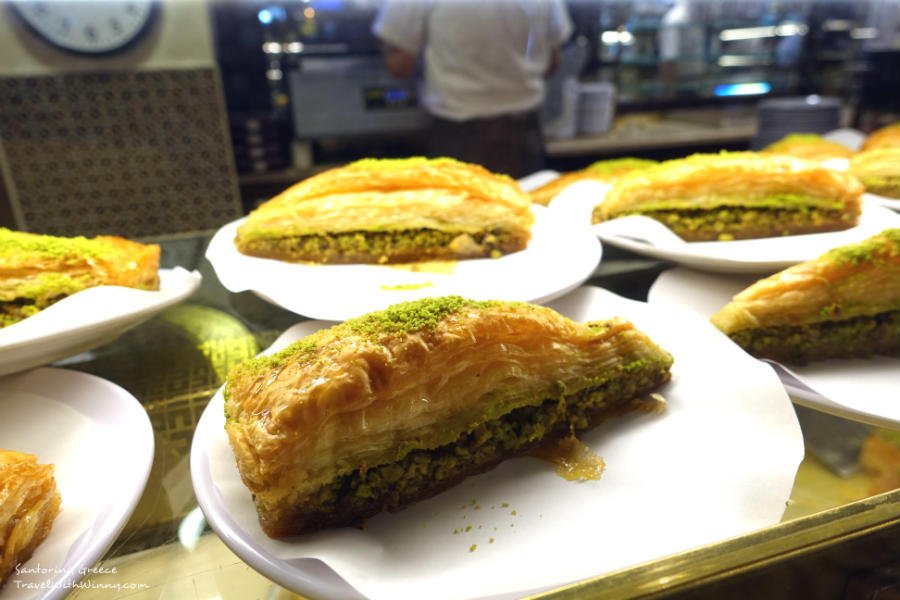 Baklava in Greece and Turkey are very similar

Other Food in Santorini 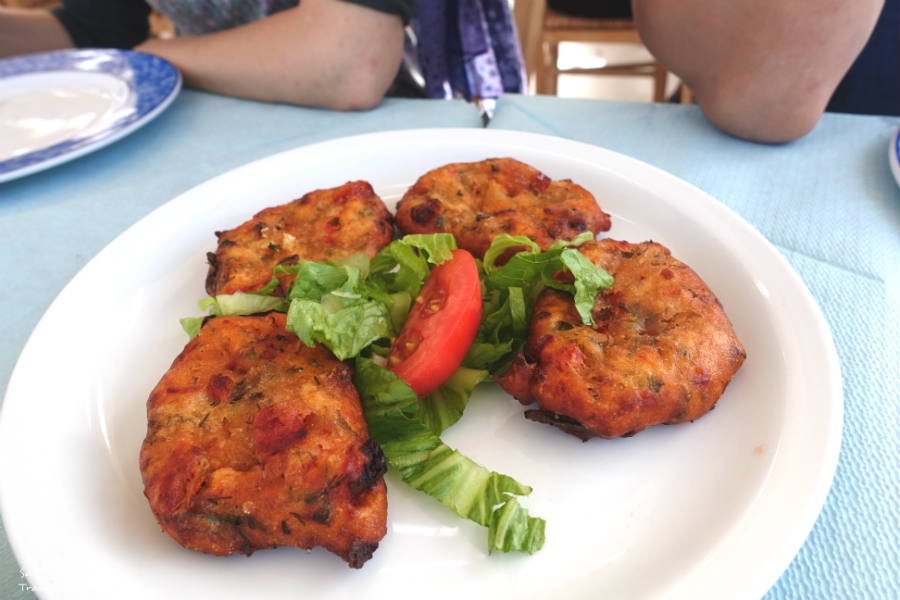 Tomato Keftedes are quite common in Greece too.

This is because Santorini is famous for its cherry tomatoes, zucchini and eggplants. These ingredients weren’t really that special for me as they are quite common in Australia too but these dishes were quite nice in most restaurants. 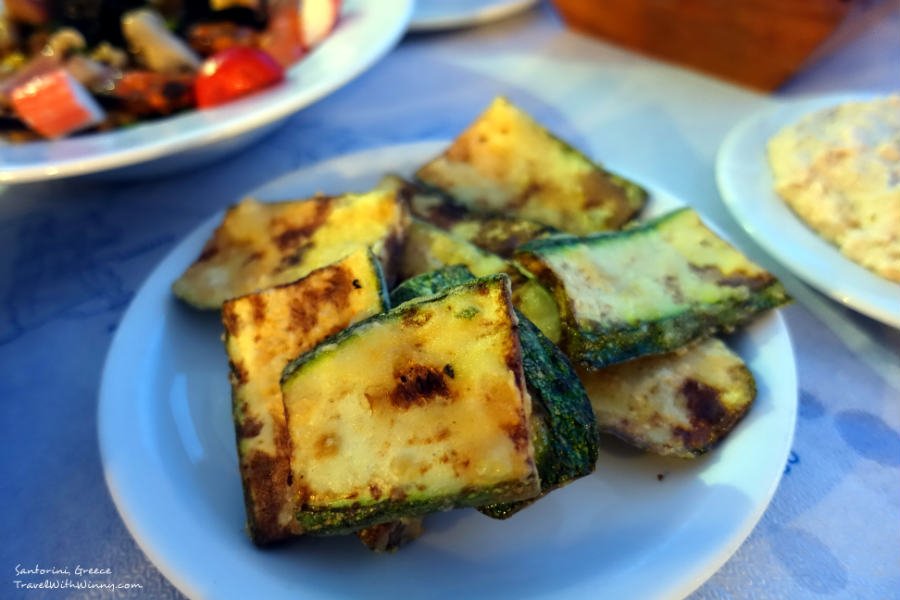 Overall many food in Oia, Santorini is quite commercialized, but if you select the right restaurant you can still find good traditional Greek food. It is all about explorations!

Our 33 seconds of Santorini Travel Video