After walking through a secret tunnel, we arrived at the middle of the spiral staircase underground. It was a mysterious place that we thought only existed in fairy tales. Looking up we could see the perfect circular skylight dimly illuminating the artistic spiral that spans from the top to bottom. This was the most anticipated place for us to see in Quinta da Regaleira in Sintra, Portugal. 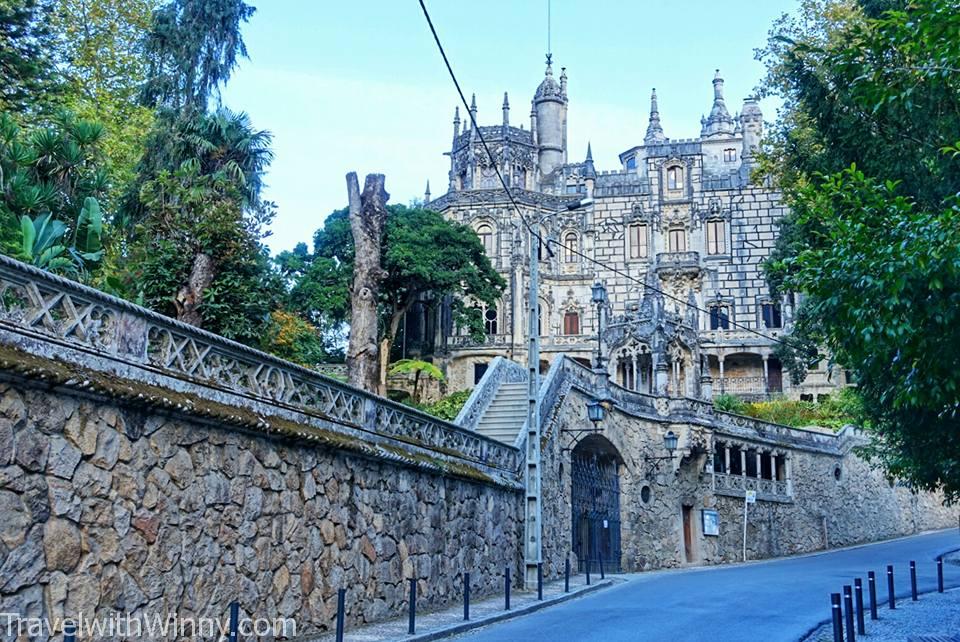 Sintra is one of our destination during our one month driving trip in Portugal and Spain. It is around 40 minutes’ drive away from the Capital of Portugal, Lisbon. The place is extremely popular due to the Romantic architectural monuments created during the 19th century and since 1995 it is classified as UNESCO World Heritage! The iconic places in Sintra includes but not limited to Pena National Palace, The Palace of Sintra and the Castle of the Moors, but our favorite is the Quintra Da Regaleira. 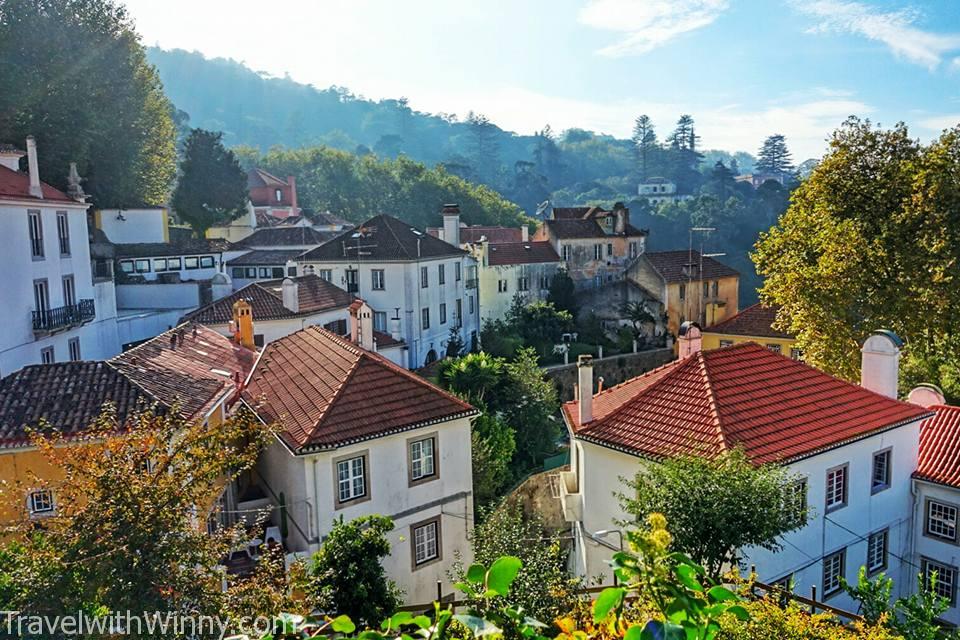 Sintra is a colorful town built in the mountains. Many Kings and royalties have stayed here in the past!

Romanticism which shaped Sintra as we know it is characterized by the emphasis on emotion and individualism. It was a revival of medieval style of architecture in reaction to the industrial revolution. The buildings, landscape and architecture in Sintra was built with the emotional feeling of mystery, apprehension and awe. This is different to the functional structures created in the later years. 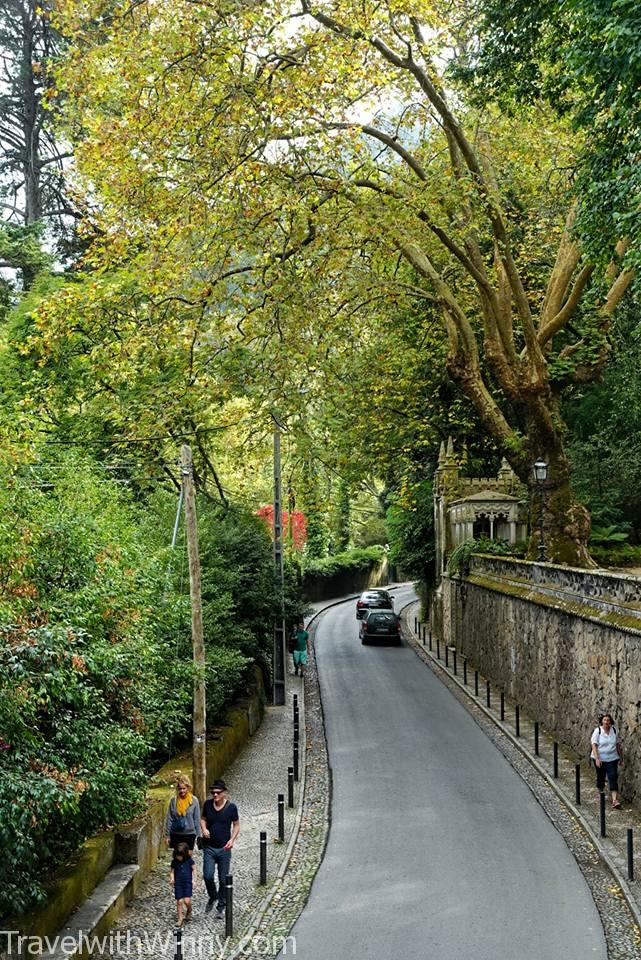 Surrounding Sintra is a dense forest! It’s a very relaxing and interesting place to visit.

Quinta Da Regaleira is an estate that was previously owned by a millionaire named Antonio Augusto Carvalho Monteiro. Monteiro was made rich by enlarging his inheritance in Brazil from selling coffee and precious stones. He bought the estate which is now known as Quinta Da Regaleira in 1892 to create a place that reflected his interests and Ideologies. 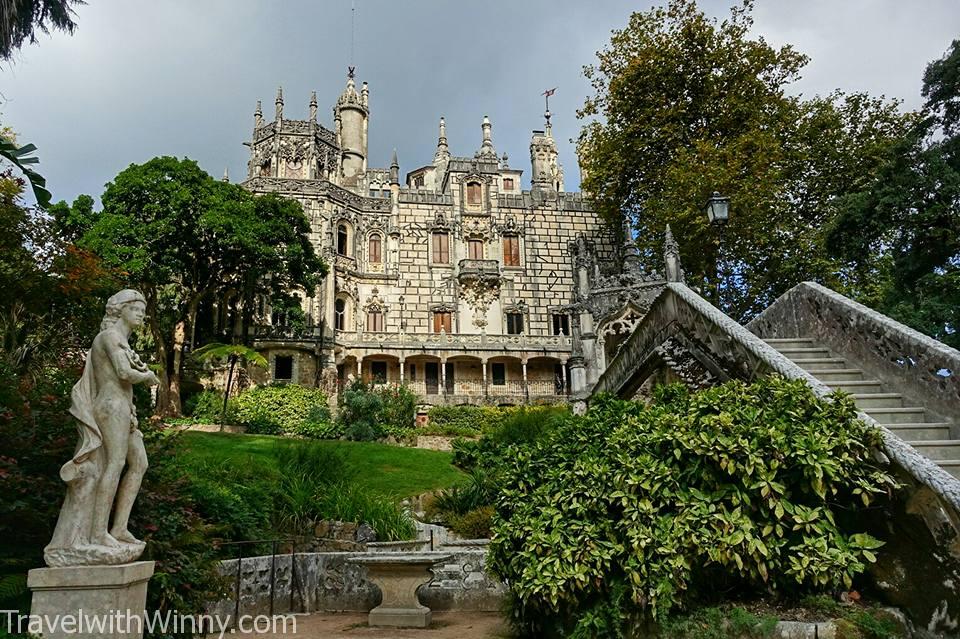 With the help of the Italian architect Luigi Manini, the estate was transformed. There were many buildings created with the symbols of alchemy, masonry and the Knights Temlar. The style which the architecture was Roman, Gothic and Renaissance. It is easy to appreciate the uniqueness of this place. The conversion of the estate began in 1904 and completed in 1910. 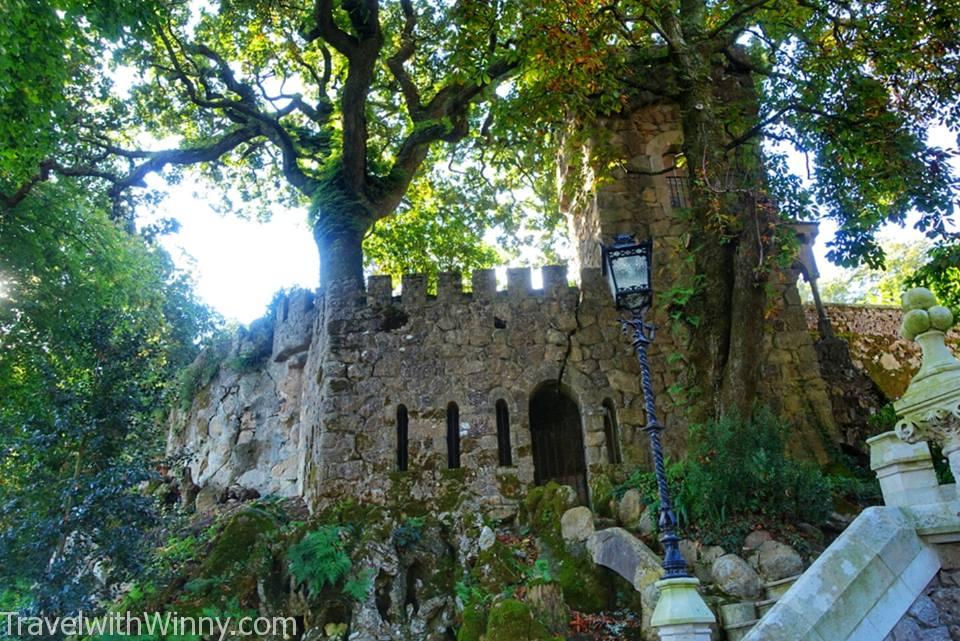 In the estate garden, there are many features that gives you a feeling that you are in a fairy tale.

The Trip Advisor for Quinta Da Regaleira is 5/5 which is quite unique and usually indicated that is a place worth visiting. After seeing the photos we decided that it is a place we definitely want to visit. From the comments we found that this place is usually quite crowded in summer. 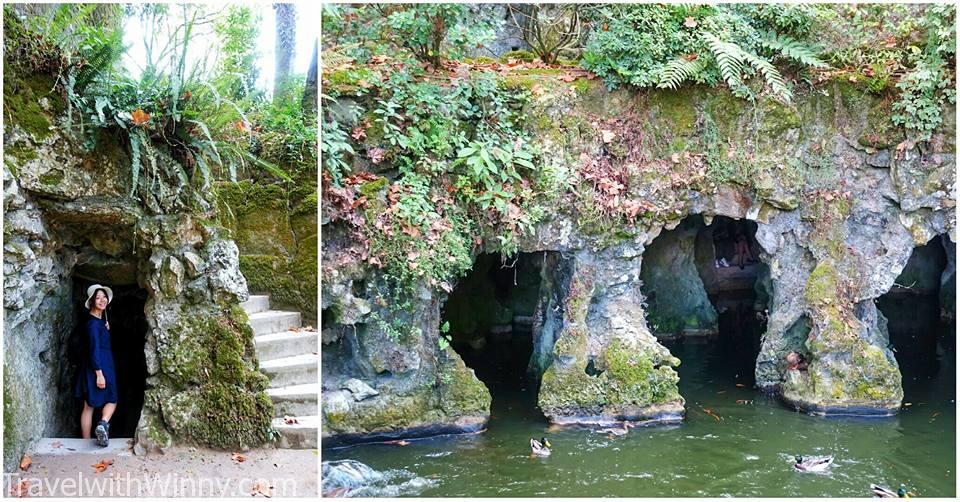 There are many tunnels in Quinta Da Regaleira. The passage infront of Winny leads to the cave next the the man made lake.

Some of the tunnels and stairs are quite narrow and we can understand that the feeling of this place can be ruined if there were too many people. Luckily we visited Quinta Da Regaleira in October and it wasn’t the peak season. We do highly recommend visiting this place just after opening time, otherwise the tunnels can get quite crowded! 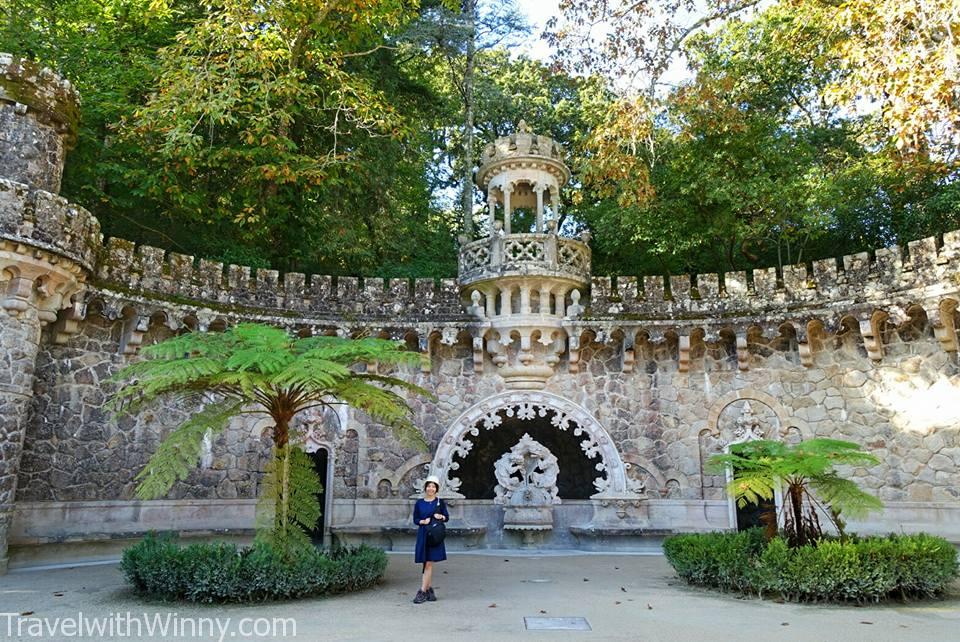 Within this tower structure behind Winny is a secret tunnel that leads to the Initiation Well.

The most unique place in Quinta Da Regaleira is definitely the 27 meters deep Initiation Well! It appears like something created out of this world. The well was created purely for ceremonial purpose and has many tunnels that connects it to other monuments and caves around the park. We found one of these tunnels when we were taking pictures in front of a tower like monument in the picture above and discovered that people were disappearing after walking behind fountain. 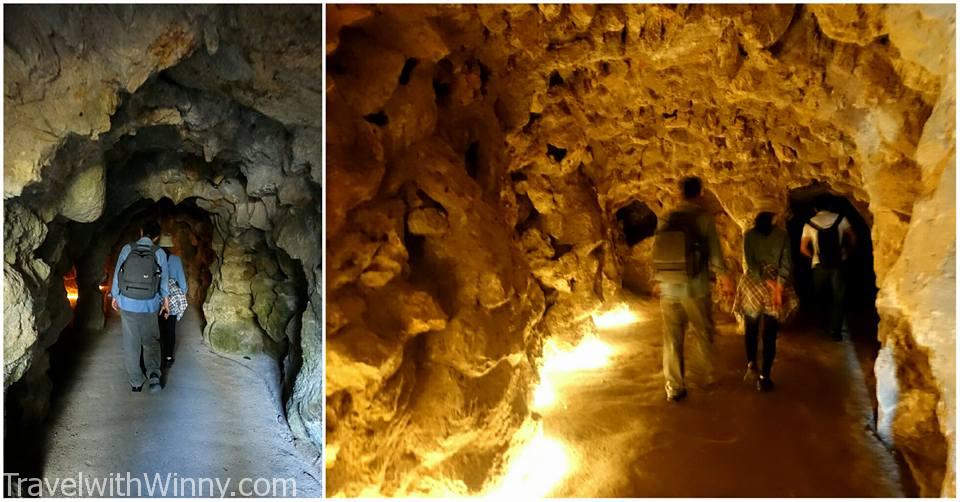 Following the dimly lit cave that would lead us to the Initiation well!

After discovering the tunnel we thought we would follow it to the Initiation Well! The dimly lit tunnel makes us feel like we were in Alice in wonderland walking down the rabbit hole. Soon we saw some light that came from the end of the tunnel and we surely weren’t prepared for the beauty of the well! 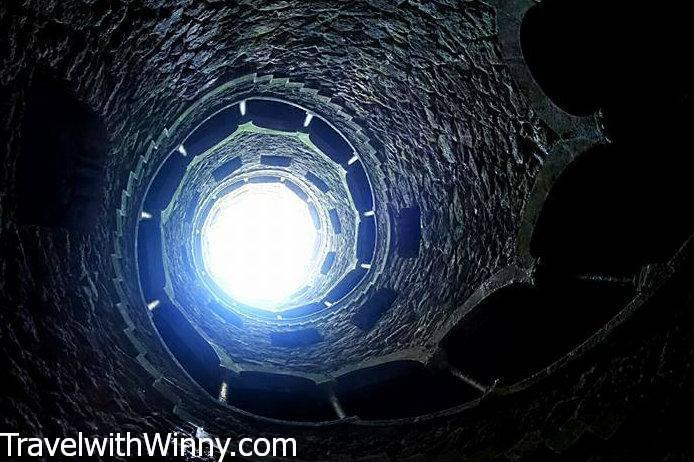 Seeing the Initiation Well in real life is even more memorizing. It was amazing to finally see it with our own eyes.

We came to right to the middle of the rotating well and after looking up and down this magical place we felt like we walk right into another universe. The sky light dimly shone down the beautiful staircase and illuminating all the way down to the mystical circular tiling below. 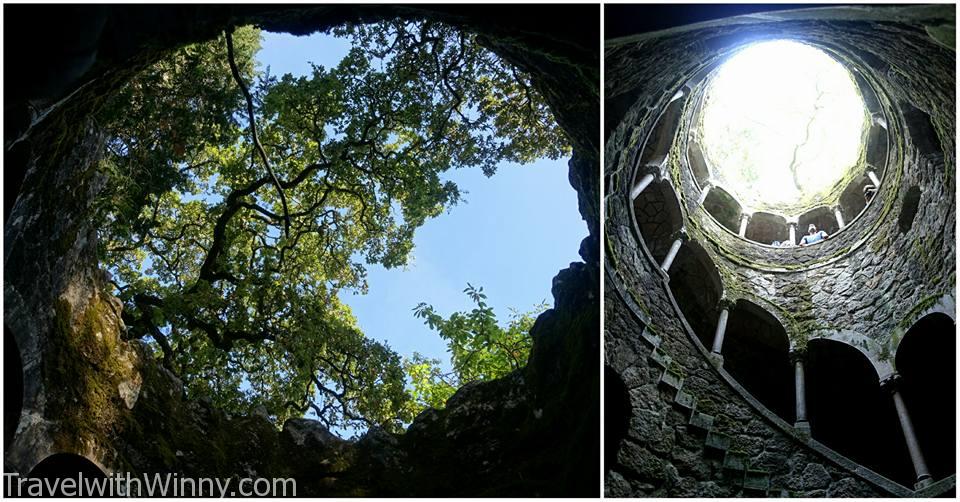 The well opening. The well produces such great photos at all angles!

It was an incredible feeling standing at the bottom of the Initiatic well staring up into sky, the well is a truly beautiful and mysterious place. The well is best appreciated with minimal people as it can get quite crowded easily. The best way is to go straight to the well immediately after opening and enjoy the few moments of peace with this place before the rest of the crowd catches up! 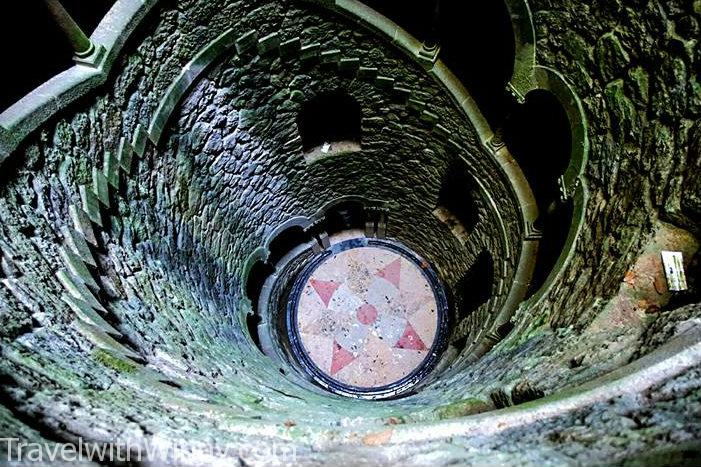 The mysterious tiling at the bottom of the well, the number of steps and the spacing of the openings are linked to Tarot Mysticism.

Right at the top of the well is a secret rotational stone door. When the door was closed, it would completely hide the entrance and disguise as a wall. It was quite a sophisticated and interesting design to hide the beautiful well behind it. 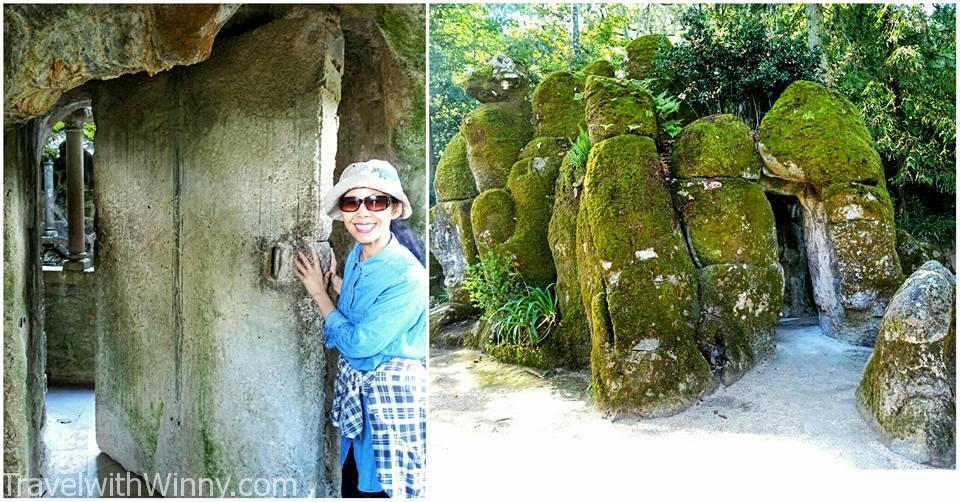 Rotation Door that can hide the Initiation well from plain sight

Connected to this well was the second well in Quinta De Regaleira. Unfortunately this well was unfinished and did not have such a sophisticated feel as the Initiatic well. 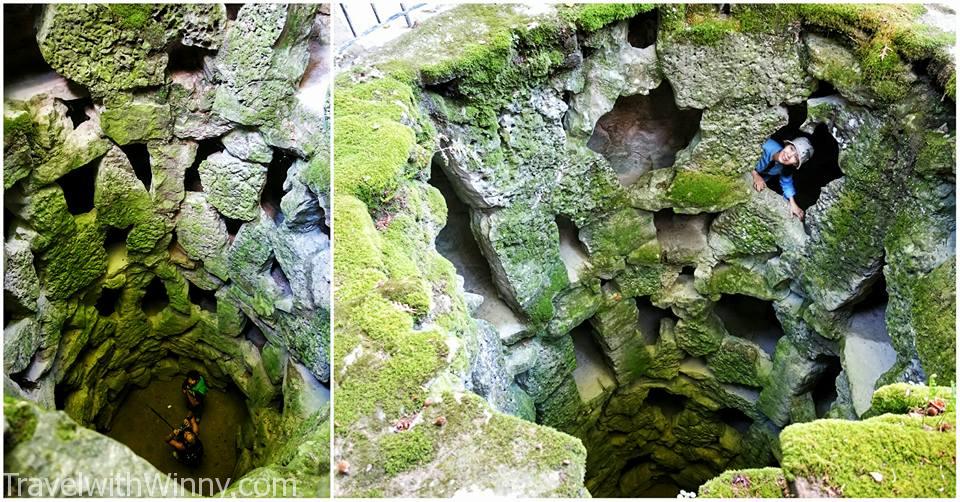 The “Unfinished Well” is still beautiful but not mystical as the main Initiation well.

After exploring Quinta Da Regaleira we found that this place has plenty of other surprises. One of them was the Regaleira Chapel which has a very similar design to the palace. The Roman Catholic Chapel is decorated with stained glass windows and beautiful sophisticated plaster works. 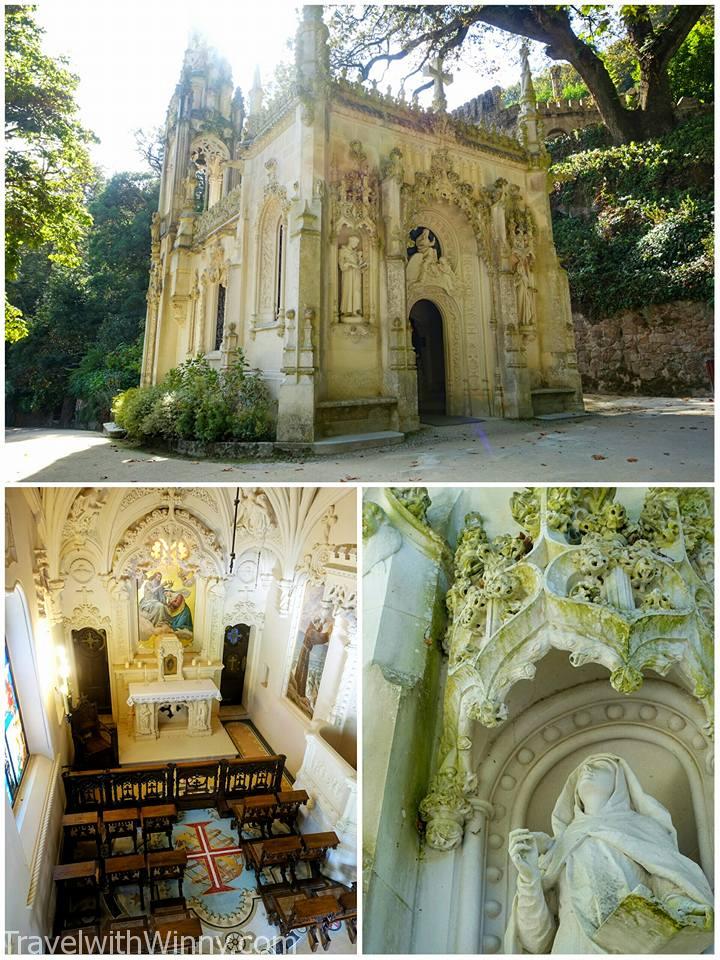 Regaleira chapel is small but the design is sophisticated.

There is a spiral staircase that leads up to a balcony and down to a cellar. We surprisingly discovered that the cellar also has a secret tunnel leads to another area of the garden. 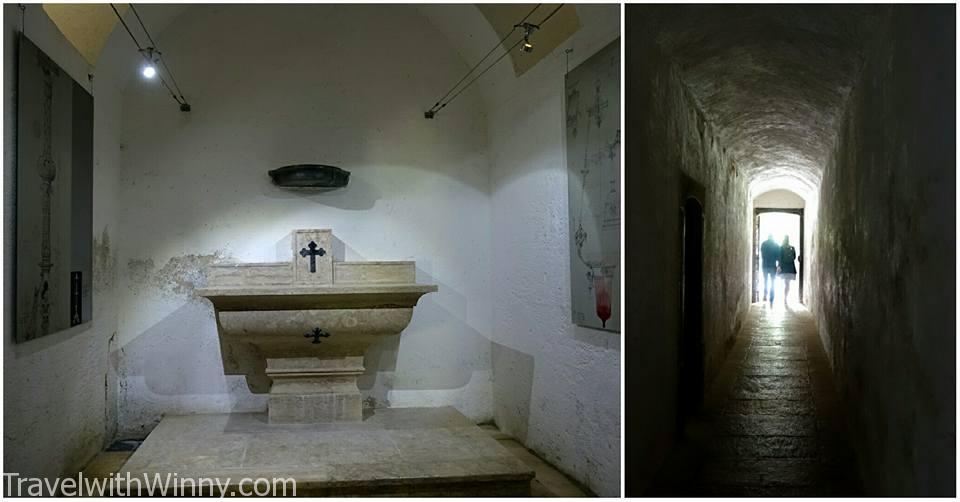 The tunnel from the chapel leads to the Palace’s garden. The ticket for Quintra Da Regaleira also includes the visit to the Palace. The Palace was more like a mansion and has 5 stories in total. 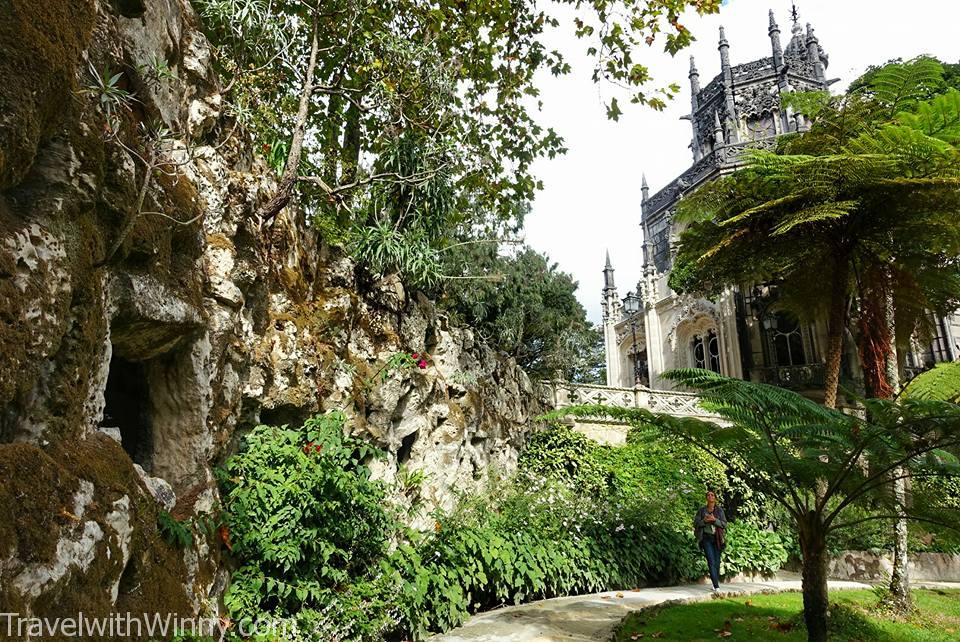 Emerging from the secret tunnel of the chapel, we could see the Palace

Inside was some lavishly designed rooms. I particularly loved the lion head handles which was uniquely designed for the Palace. We could visit every room in the Palace and there were simple explanations which we could read at our own pace. 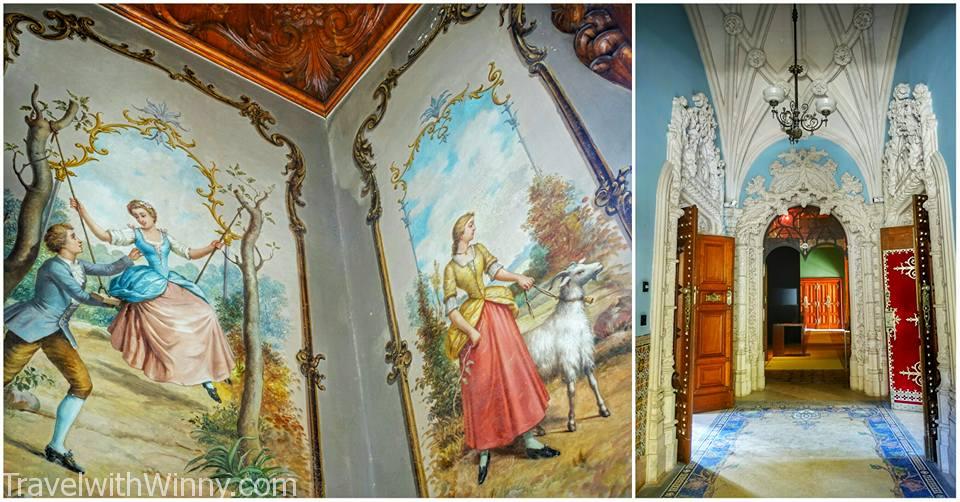 The interior of the palace is finely decorated

There were many designs, plans and drawing of the estate on the top floor of the Palace. Luckily we went to visit the garden first as we could then truly appreciate how much efforts were put into the designing and building of this estate. 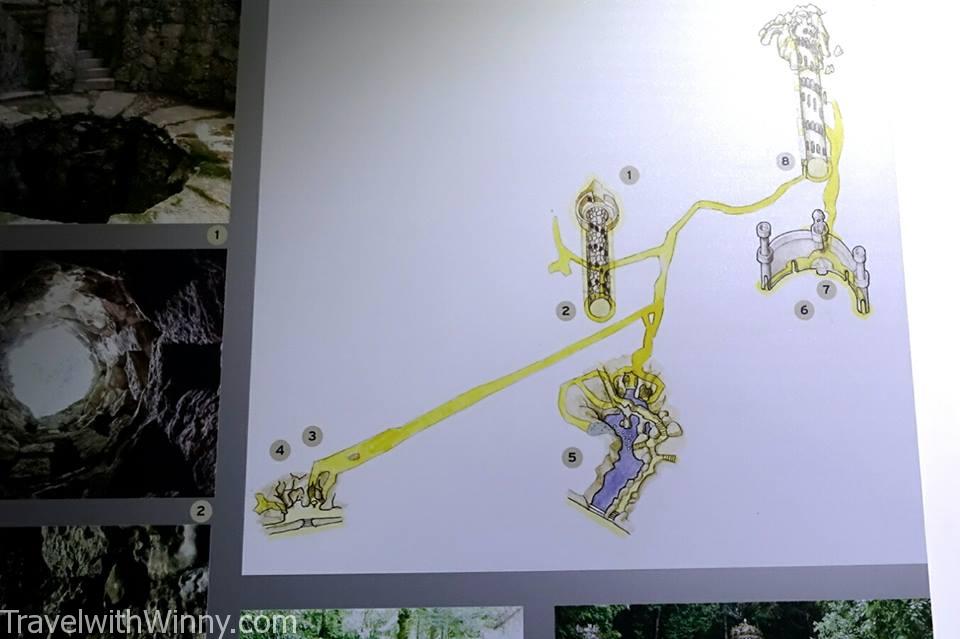 There were explanations of the designs and plans on the estate. These were found on the top floor of the palace

To properly enjoy this place you would need at least half a day. Otherwise you would easily miss the details such as a secrete tunnel that leads to a cave behind a man made lake. Come Visit the Quintra Da Regaleira with a sense of adventure and it is definitely one of the highlights during our travel in Europe! 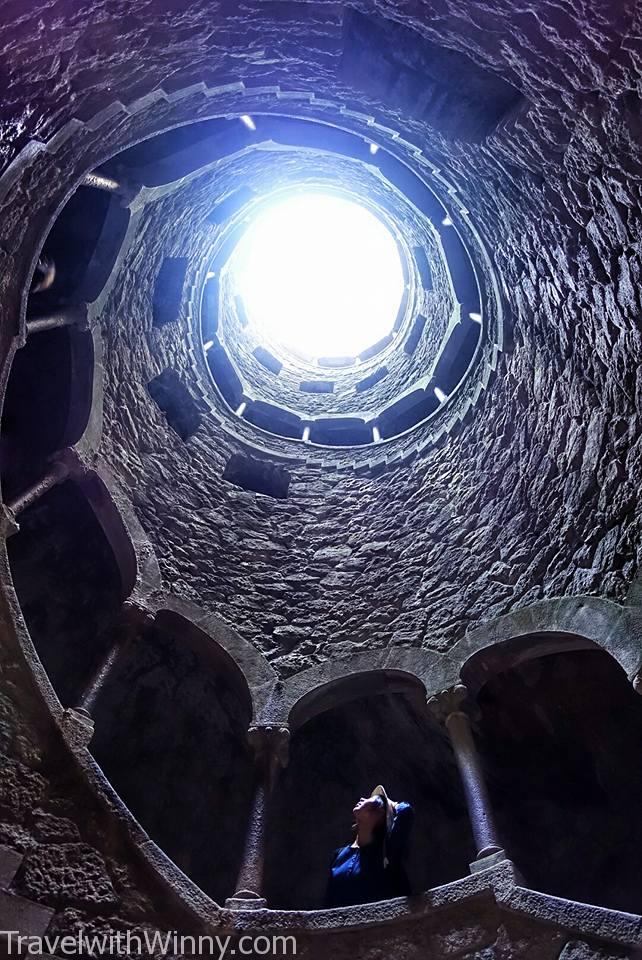 Remember to come see the Intrinsic well if you are in Portugal!

Two other major attraction in Sintra 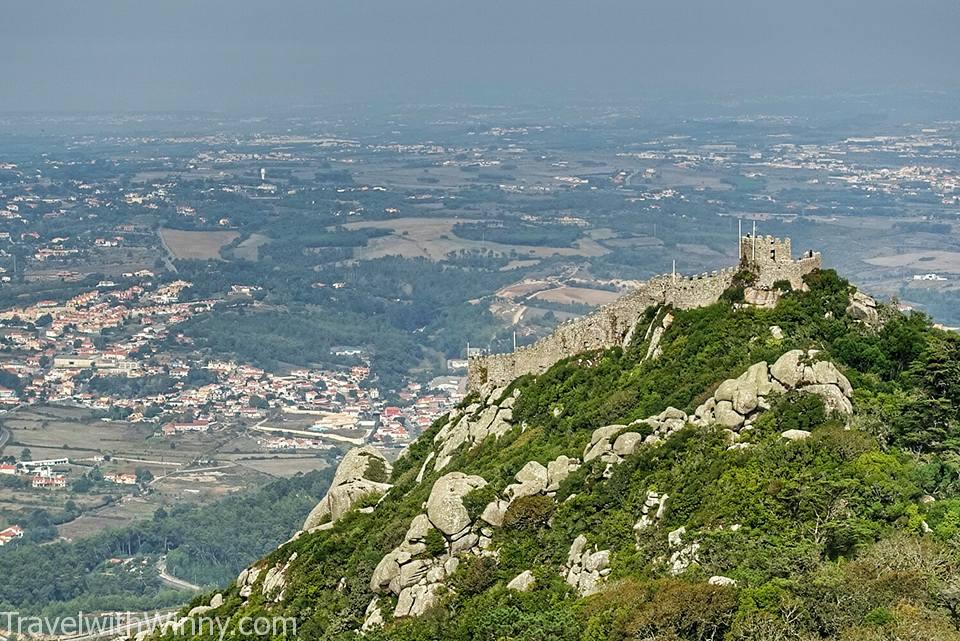 View of the Castle of Moors from Pena Palace

Pena Palace is built in the style of Romanticism and is one of the Seven Wonders of Portugal. The Pena Palace looks great from afar and is definitely a place to take striking photos. The Palace was complete in 1847 and was built by King Ferdinand II as a summer residence for the Portuguese royal family. Along with Romanticism designs, the Palace also features Medieval and Islamic elements. 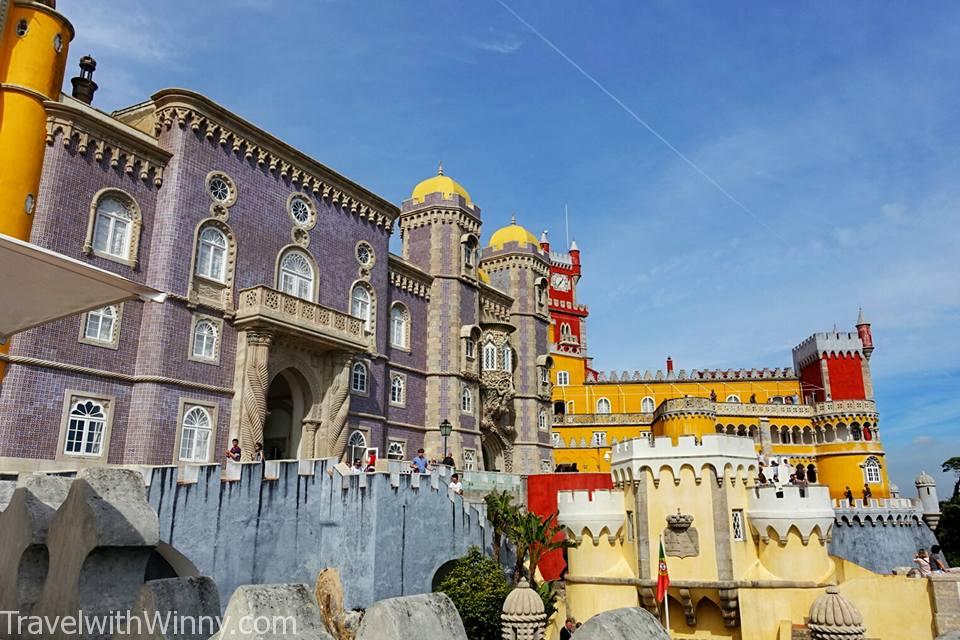 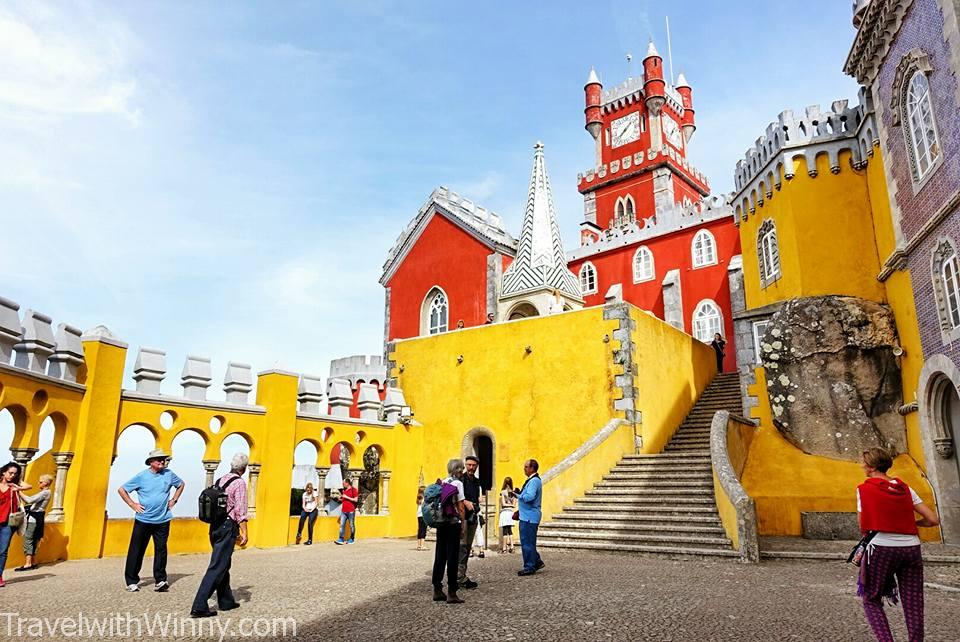 The interior of Pena Palace is very similar to most other European castle so it is probably not worth the time and the ticket cost if you have seen a few before. The garden was a little bit of a letdown and some of the buildings and structures designed for the entertainment for the royalties just look like big toys. Some people took some amazing pictures of the man made pond but in reality it looked quite ordinary! 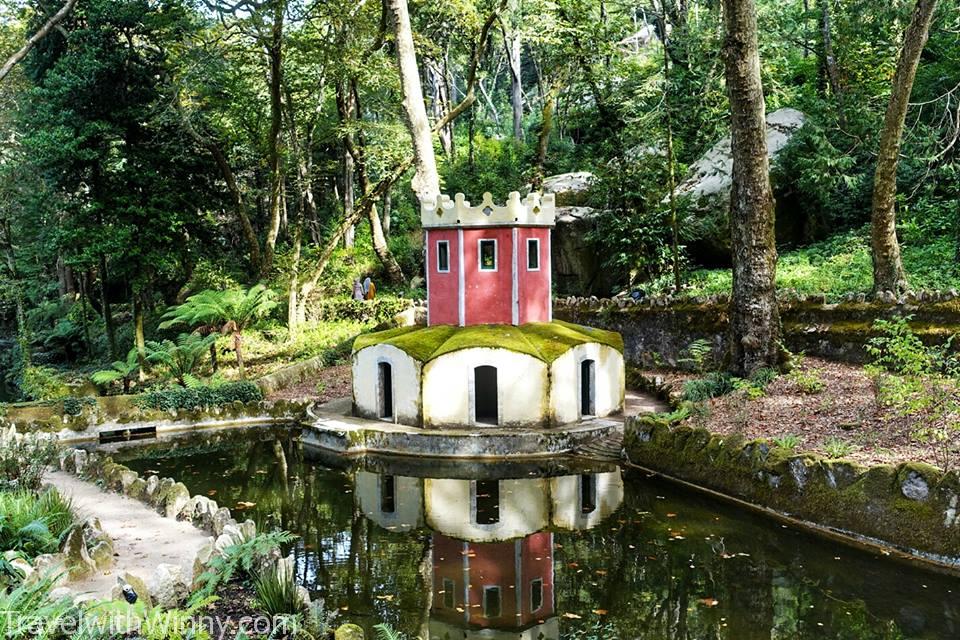 Many people shot mystical pictures with this lake but it really is quite ordinary!

The Pena Palace and The Castle of Moors are both built on high points in the Sintra Mountains and both have great views of the surroundings. Sintra is a truly beautiful place and definitely worth visiting over a few days to appreciate it’s beauty! 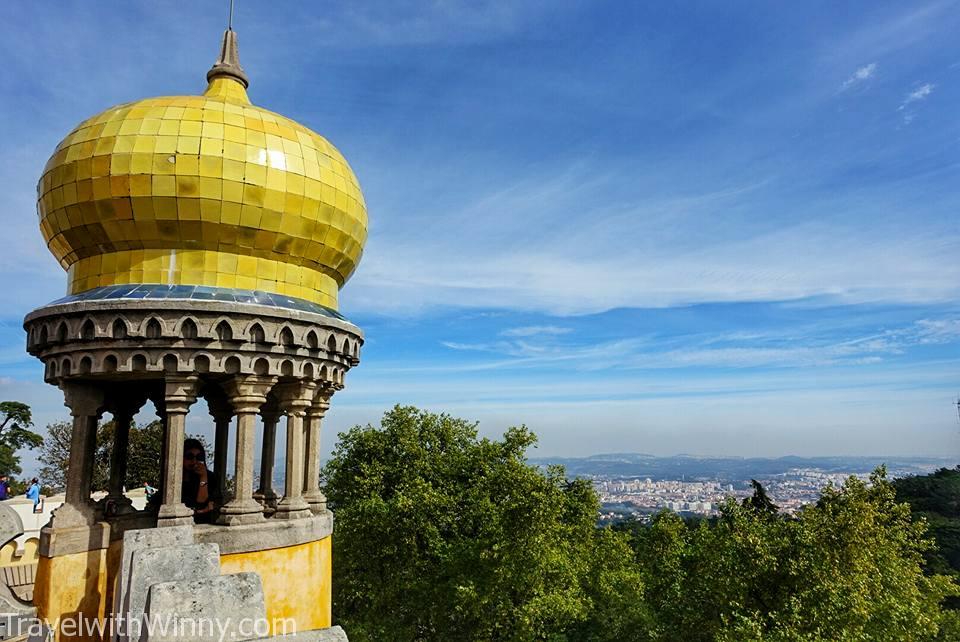 The scenery is great from the Pena Palace and the Castle of Moors.