My dream was to visit Sahara Desert, ever since I read the book “The Little Prince” by Antoine de Saint-Exupery at age of 8.  Now after flying half way across the globe and on 5th day of our Morocco journey, we are finally heading towards the Sahara Desert. 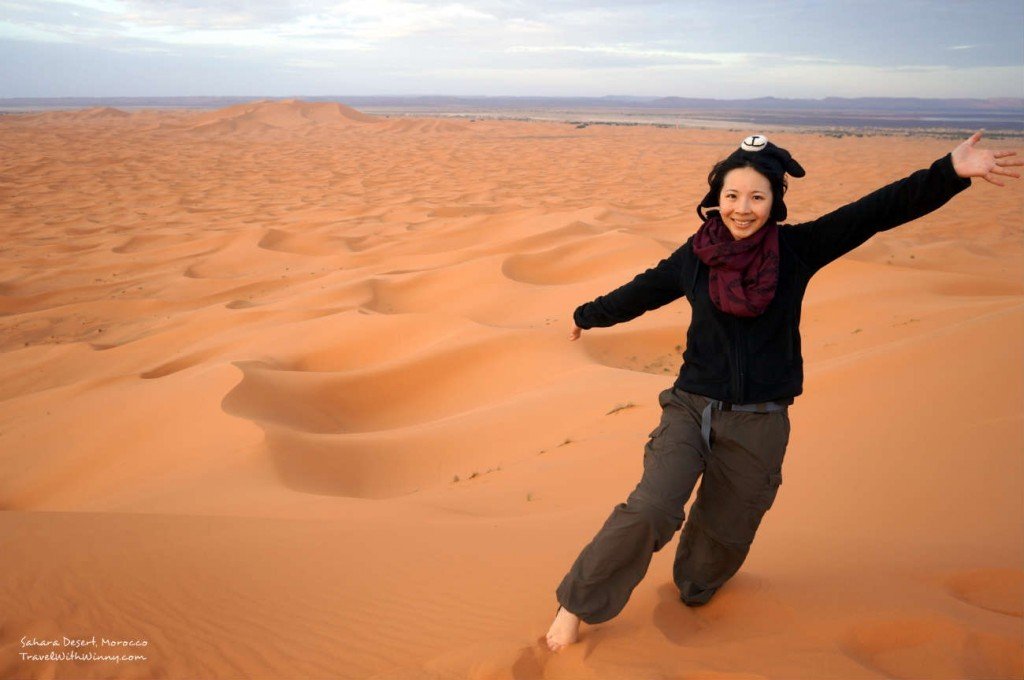 The incredible feeling of ticking off the bucket list.

It is actually very difficult to get to Sahara Desert without a guided tour since it is so far away from major cities like Fez and Marrakech. Marrakech is the most popular starting point for Sahara Desert excursions. Typically there are 3 days 2 nights option and a 4 days 3 nights option. I strongly recommend people to do 4 days 3 nights tour if time allows, otherwise you will be spending a lot of time in the car and may get uncomfortable. The only company I found with reasonable price and good reputation on Trip Advisor is Camel Trekking, 3 days 2 nights is 150 Euro per person and 4 days 3 nights is 180 euros per person. However it is a group tour and books out quite early and the tour only returns to Marrakech. 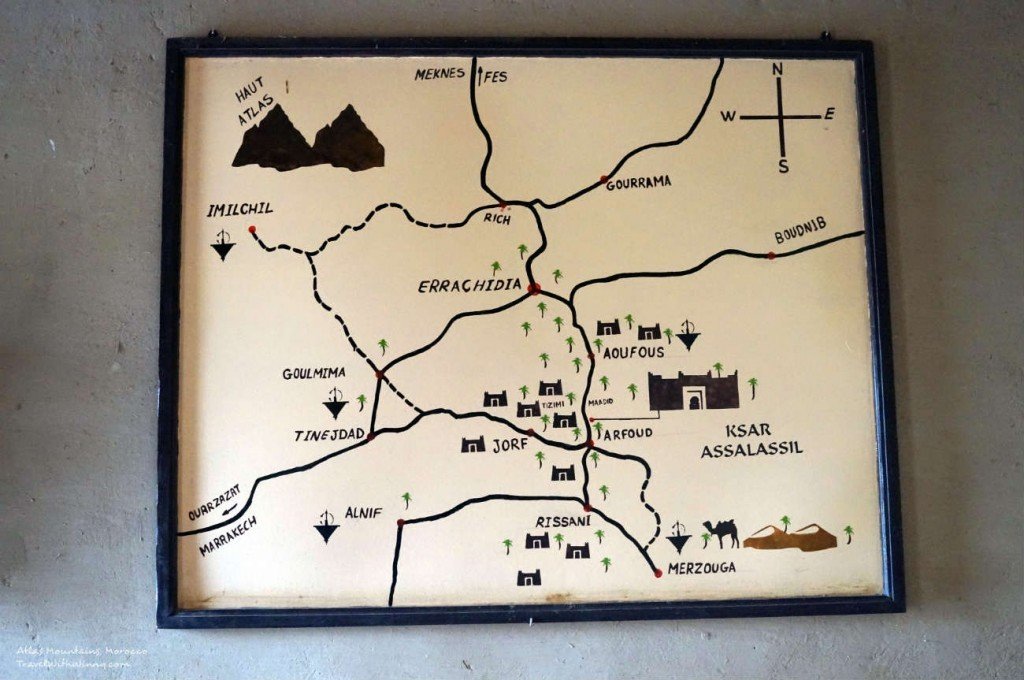 The map of Sahara Desert region. A lot more towns than I anticipated.

Since we are travelling to Fez afterwards, I decided to email a list of companies near Merzouga (the major town right before people head into Sahara Desert). Private tours gave us the option of going from Marrakech to Fez via desert tour, which saved us time and transport cost. It turns out we were able to get 4 days 3 night private tour for 2 people at cost of 350 euros per person. 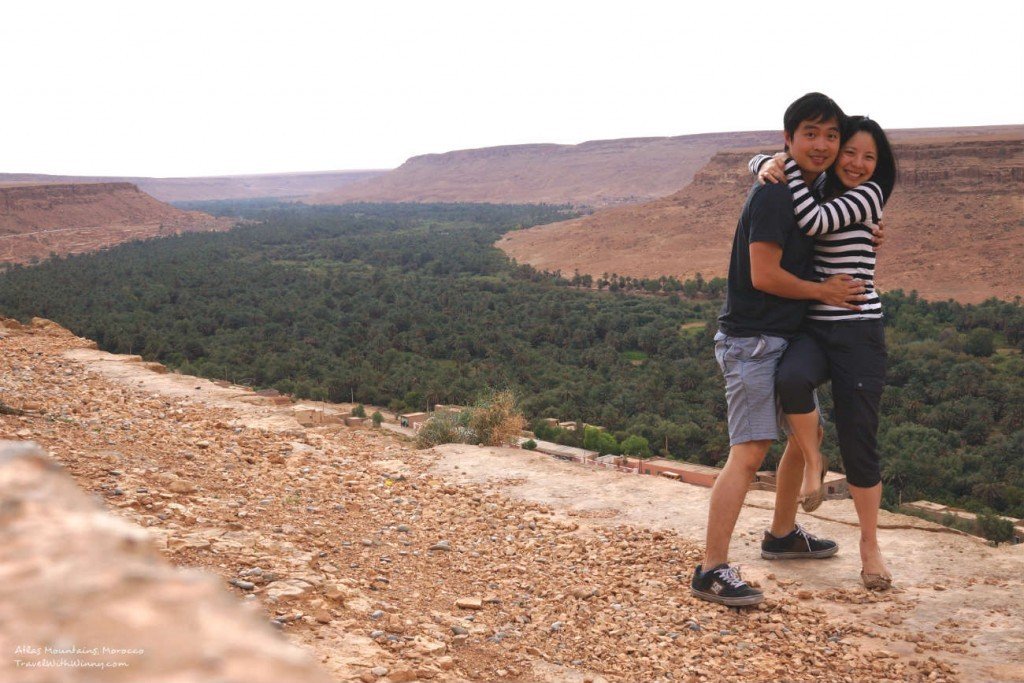 The largest oasis in North Africa. There used to be a river here.

However I didn’t realize our private company only has 1 night in Sahara Desert, all the other nights were hotel accommodations. Where as the 4 days 3 nights provided by Camel Trekking included a night with the Nomadic family in the desert as well as camping next to great sand dunes of Erg Chebbi. If I paid more attention to the itinerary, a night with the Nomadic family could’ve been requested. 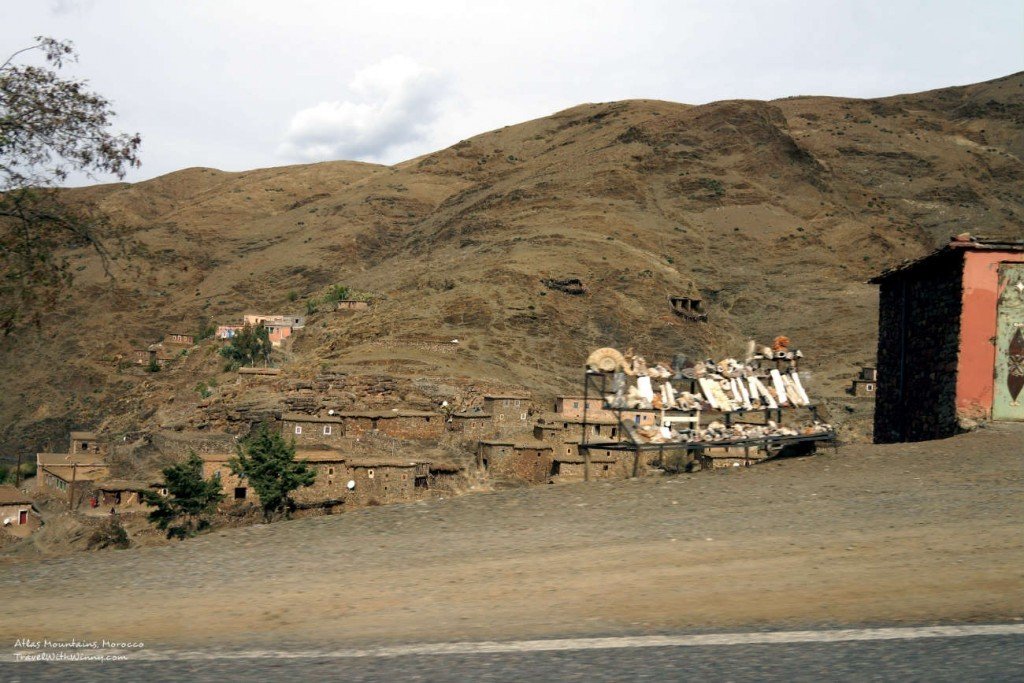 There were many basic dwellings along the Atlas Mountains.

On the first day we drove 15 hours just to get to the gateway of Sahara Desert. We started our day in Marrakech (What to Eat in Marrakech?) towards Ouarzazate- the largest city on the boarder of Sahara Desert region. We had to pass Atlas Mountains ascending to an altitude of 2260 meters above sea level at Tizi n Tichka. The roads were very twisty with a lot of big trucks. It was quite dangerous. Luckily our driver was very professional and we felt quite safe after awhile. The dwellings along the mountain ranges looked very basic, a huge contrast compare to Marrakech. The reason for this is because the majority of people have migrated to larger cities for work, only the poor and the weak are left here. They rely solely on farming and tourism. 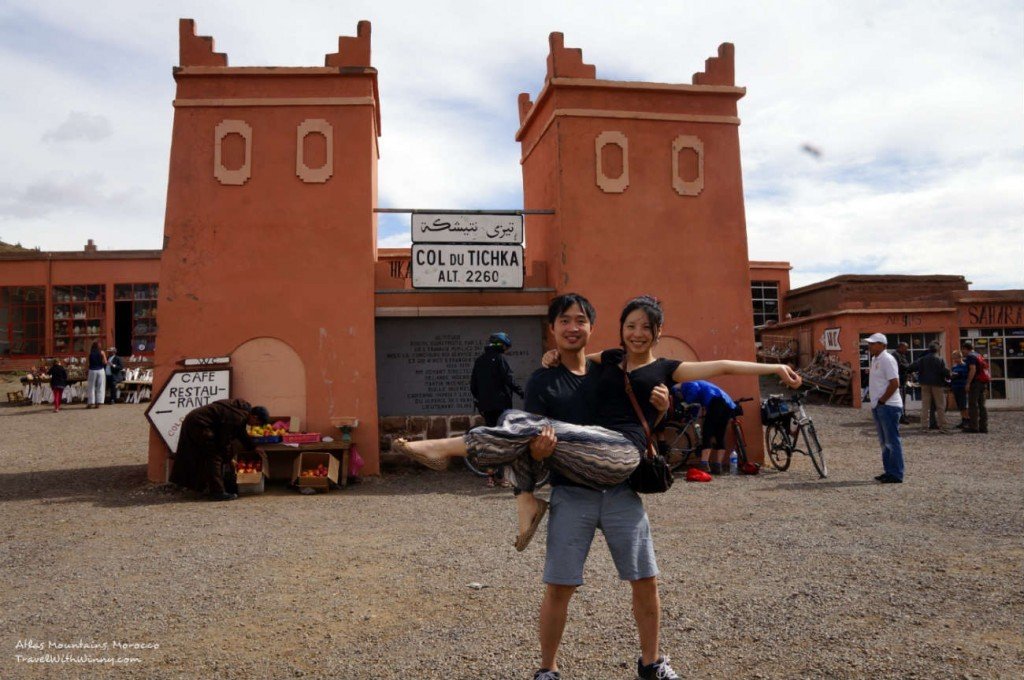 By passing Tizi n Tichka, with the highest point being 2260 meters above sea levels.

Aït Benhaddou is an UNESCO World Heritage 30km from Ouarzazate. It is a traditional city on the edge of the High Atlas Mountains. It is one of my favourite places in Morocco, we actually didn’t know about this place until we arrived. Many Hollywood films were filmed here including Gladiator, The Mummy, Prince of Persia, Game of Thrones, etc just to name a few. It felt like a movie set than an actual World Heritage Site! 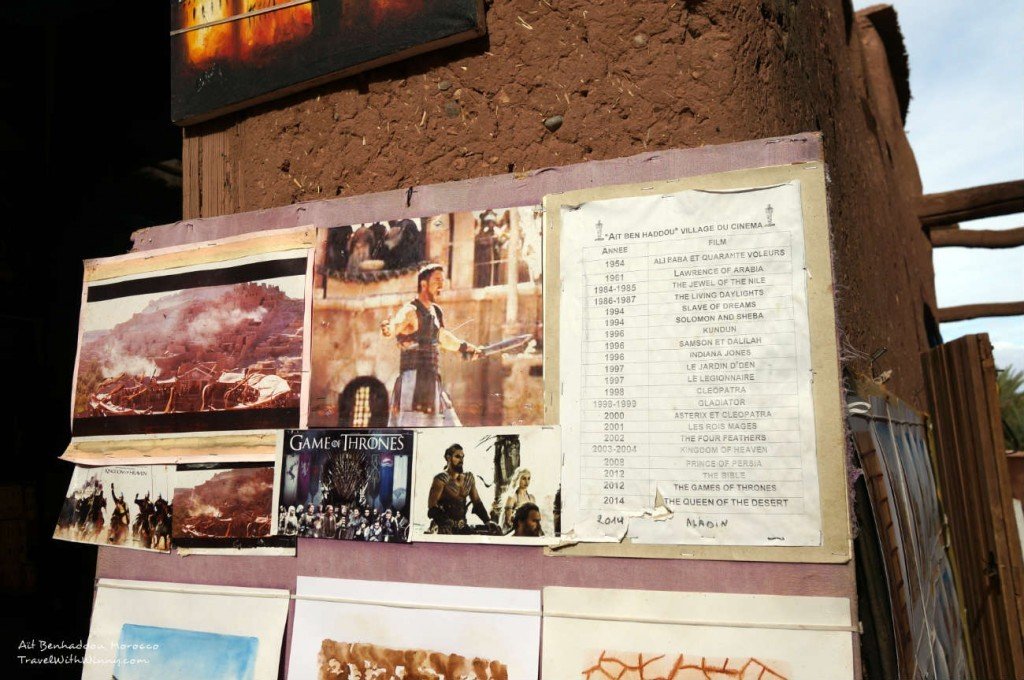 While we were having lunch outside of Aït Benhaddou, we saw a group of beautiful hot girls with film equipment and a man who looked very much like a director. They must’ve been shooting in the scene. We were quite excited to see them, however it seemed like they just finished their day. We didn’t get to see any cameras rolling. 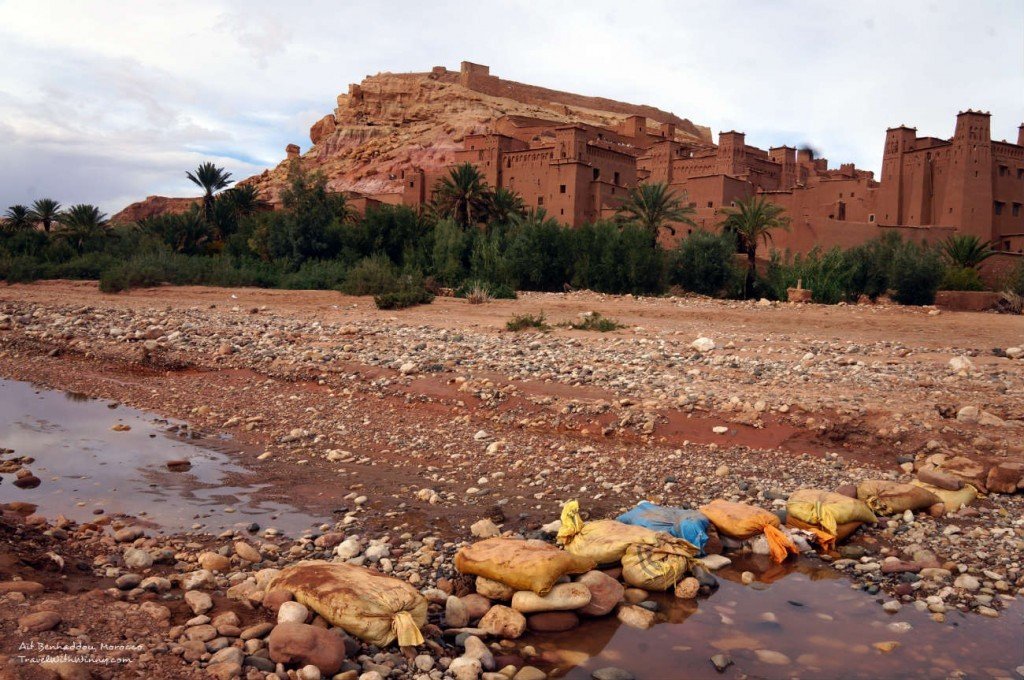 Ait Benhaddou with dried up river in front.

There was actually a river in front of Aït Benhaddou. We were very lucky as it was dry season and we could barely tell the river existed. I hear from other travellers that sometimes the river could reach waist height and requires you to rent a donkey to cross the water. So glad we didn’t have to risk getting ripped off by locals again. 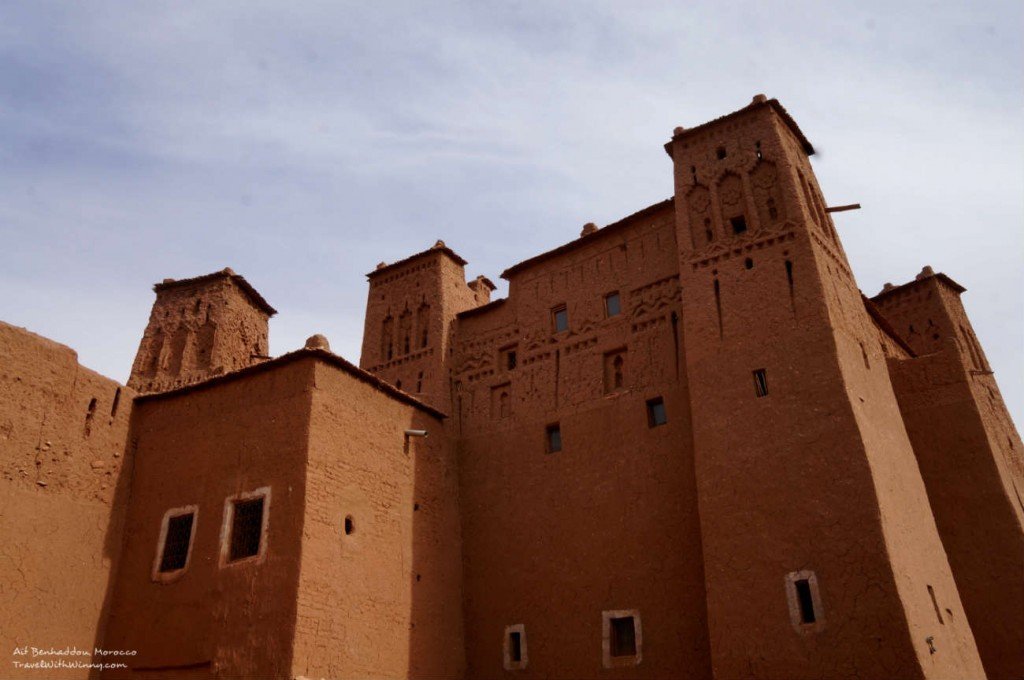 The walls are made of red mud, making repairs difficult.

Stepping inside Aït Benhaddou, it is the large Kasbah we have been so far. Kasbah is a type of Islamic fortress, a place for local leaders to live and act as a defence for the city when its under attacked. Even though they try to restore the place, they will never be able to. Since the walls are made of clay and straws, it gets washed away by rain too easily. 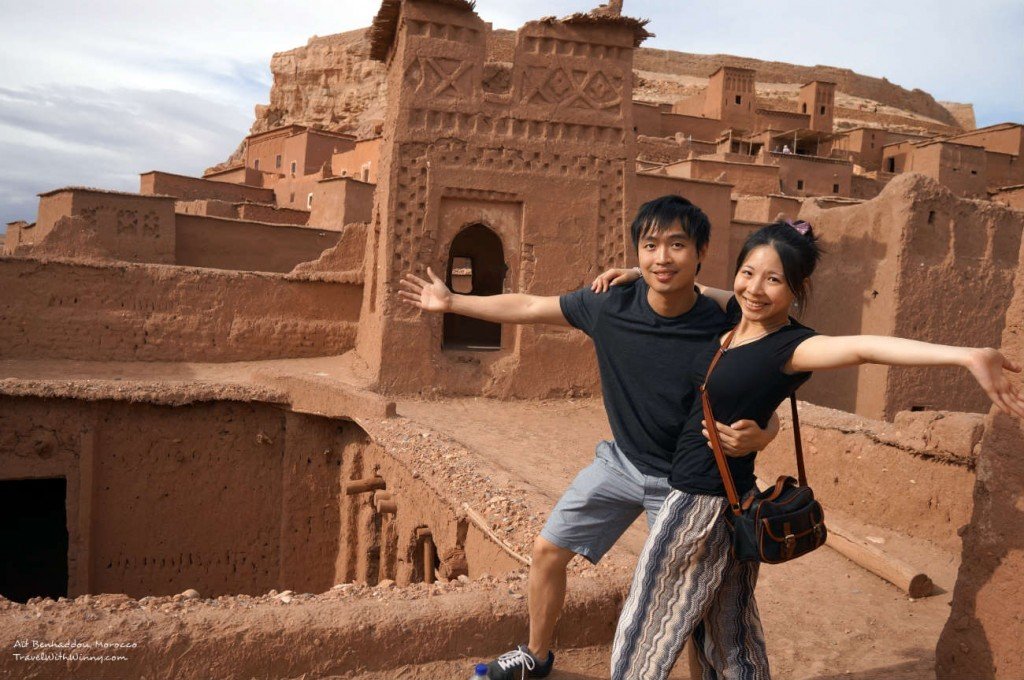 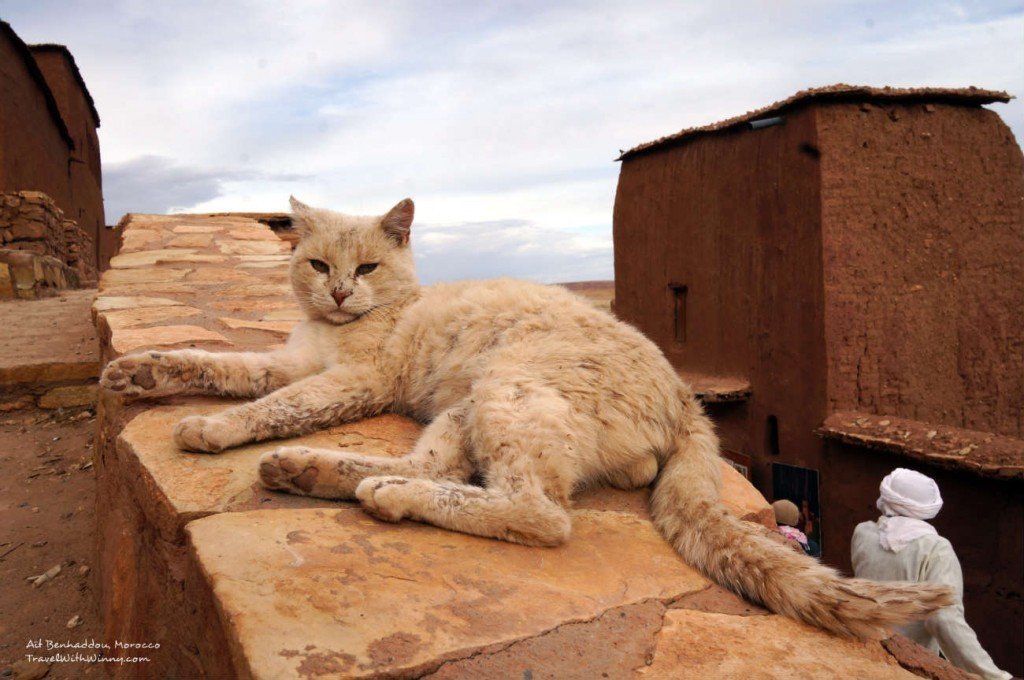 Aït Benhaddou is not easily accessible by public transport. The easily way would be hire a taxi or join a tour at Ouarzazate. If money is a real problem, you can take bus from Marrakech towards Ouarzazate and get off at an intersection where you can walk 9km to Aït Benhaddou. I don’t think anyone would walk that far to save a few dollars in Morocco. 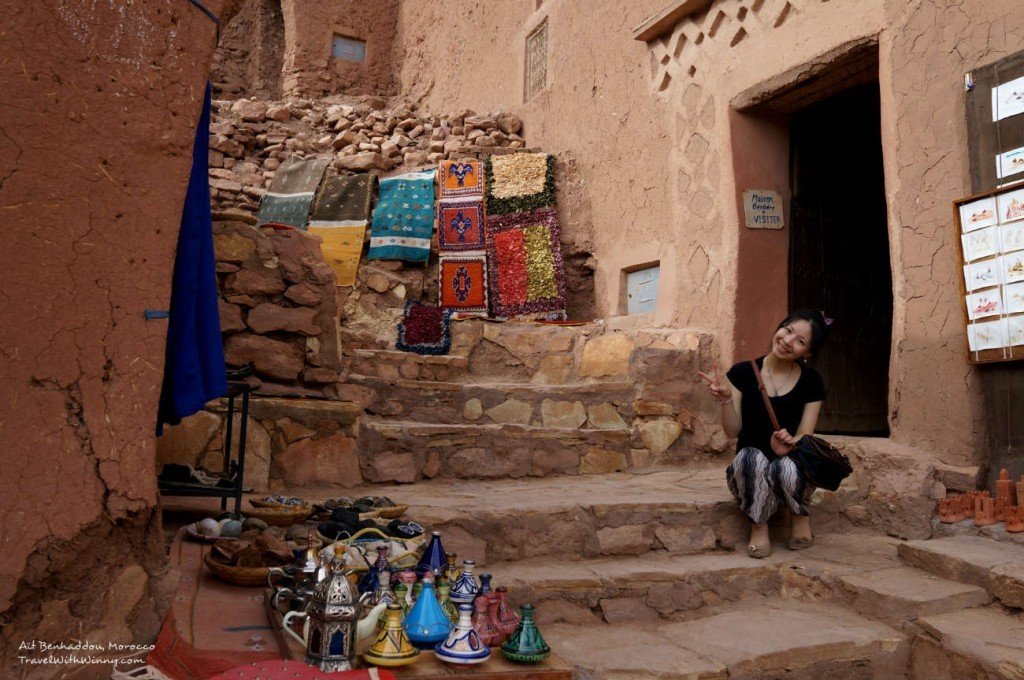 One of the few stores near Aït Benhaddou. 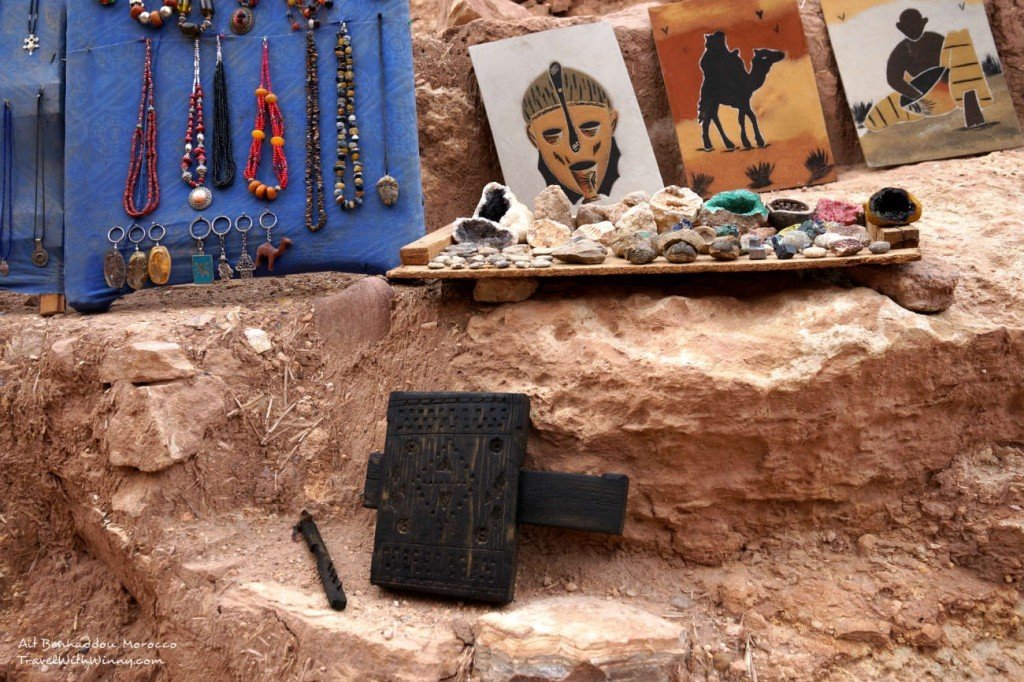 York said these are the weapons from Gladiator.

The old town was surprisingly empty, except for a few groups of tourist and a small number of locals. Some kids will invite you to visit their “Berber home” for 5DH. We didn’t accept the offer. There were barely any shops or restaurants within the Kasbah, most of them are located in Wadi- the new town closest to Aït Benhaddou. The only store that I thought was pretty interesting was the shop that sells movie props and the photos from behind the scenes. 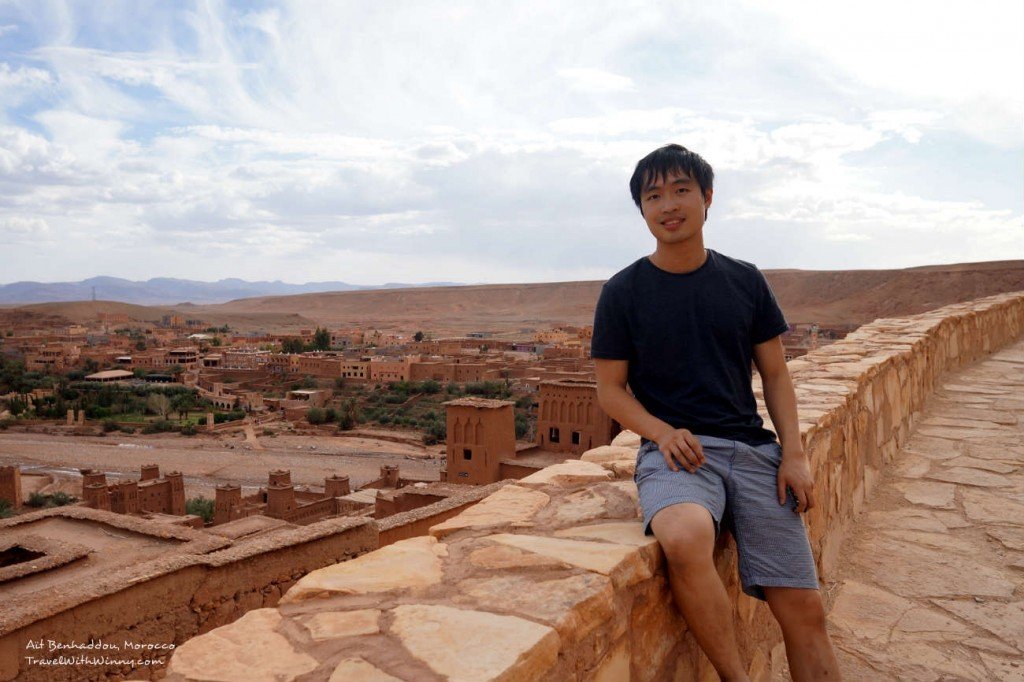 It took us awhile to make it to the top, felt like Great Walls of China. 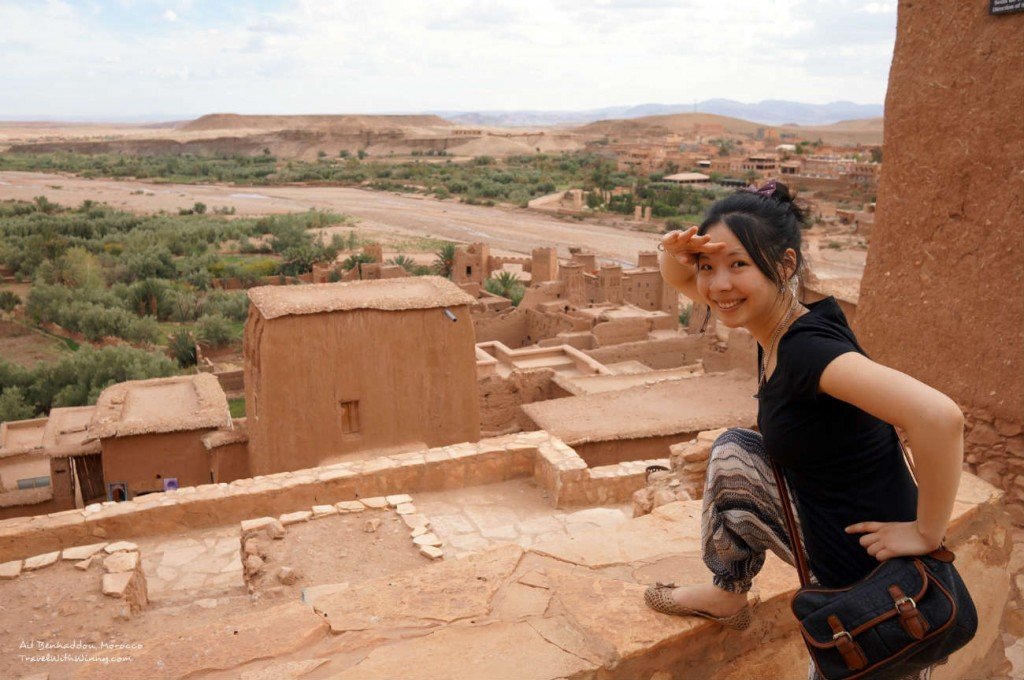 On the top of Aït Benhaddou is an old barn, we had to bypass many old houses and stairs to make it there. Since the paths were not very well made, sometimes we had to jump to cross to the other side. The view at the top was amazing! You could see the new town across the river along with the oasis and rest of the desert. In the far distance, Atlas Mountain was covered with snows. 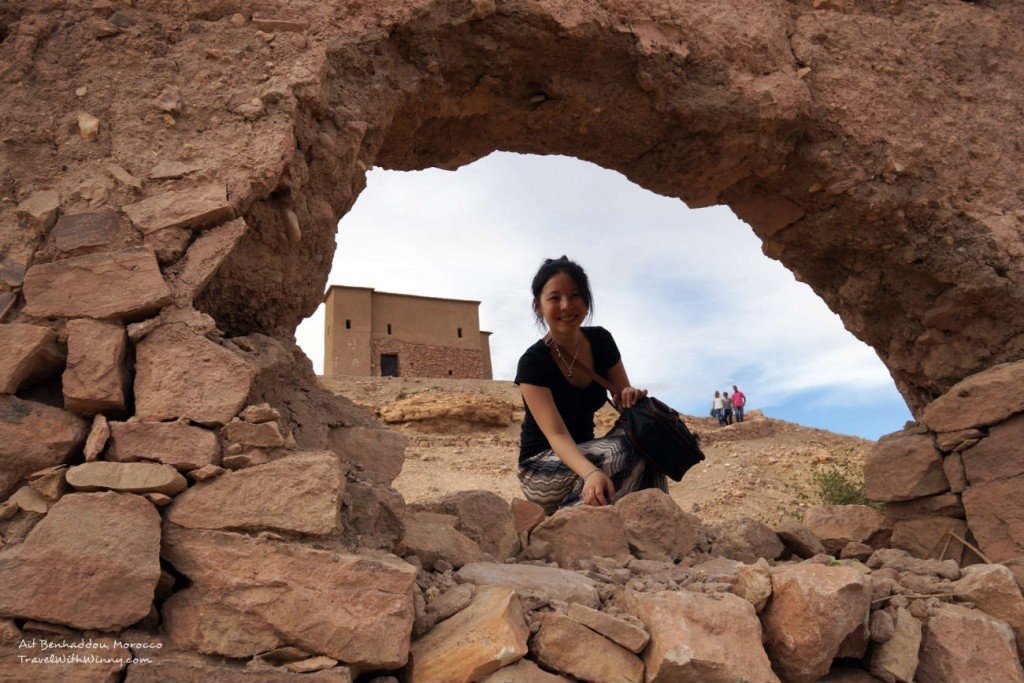 A broken wall is a perfect composition. 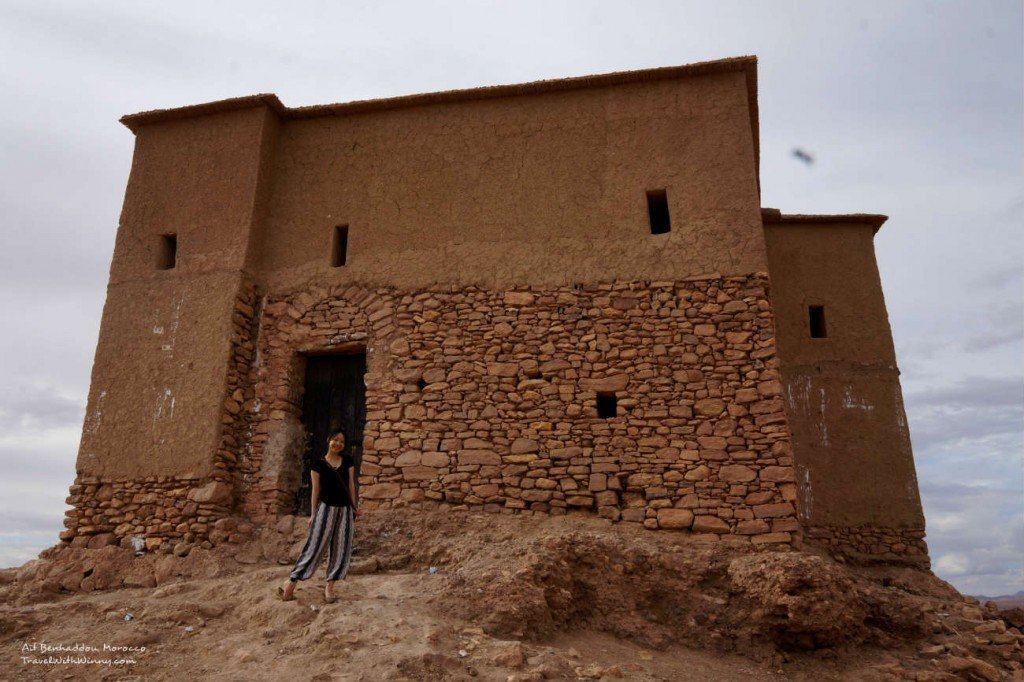 The top of Aït Benhaddou, as you can see the side of the barn is collapsing.

York and I spent quite a long time taking pictures and making videos here. Luckily we hired a private driver which allowed us to tour around the area at our own pace. I would highly recommend everyone to visit this part of Morocco on their way to Sahara Desert. We have also made a film for this place. Please enjoy!