As soon as the announcement for Les Miserables coming to Melbourne’s  Her Majesty’s Theatre was made, Laura and I bought the tickets as soon as the tickets went on sale for the public. We bought the tickets 10 months before the show! Which we thought was pretty crazy. It seems like it has become a yearly thing for us to travel from Adelaide to Melbourne for a weekend to watch musicals, last year we watched King Kong. This Edition is 25 anniversary edition that premiered in London in 2010. It’s awesome how they came to Australia 4 years later. 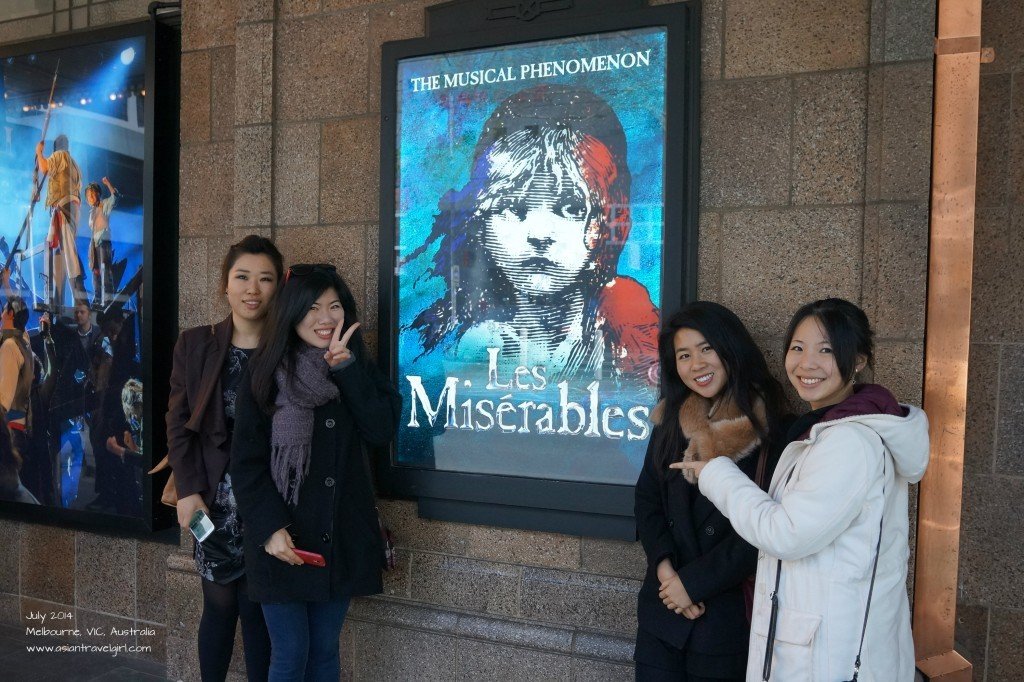 We love buying the Sunday afternoon shows, which means we can choose to fly into Melbourne on Saturday night after work or fly in Sunday morning depending on the situation (last year Laura and I did an over-night bus from Adelaide on Saturday night and arrive in Melbourne on Sunday morning, never again!). I am sure everyone has seen Les Miserables in the movies where Anne Hathaway sang “I Dreamed a Dream” and won an Oscar. I believe the movie was pretty much based on the original musical. The original musical was based on the novel written by French author Victor Hugo in 1862. 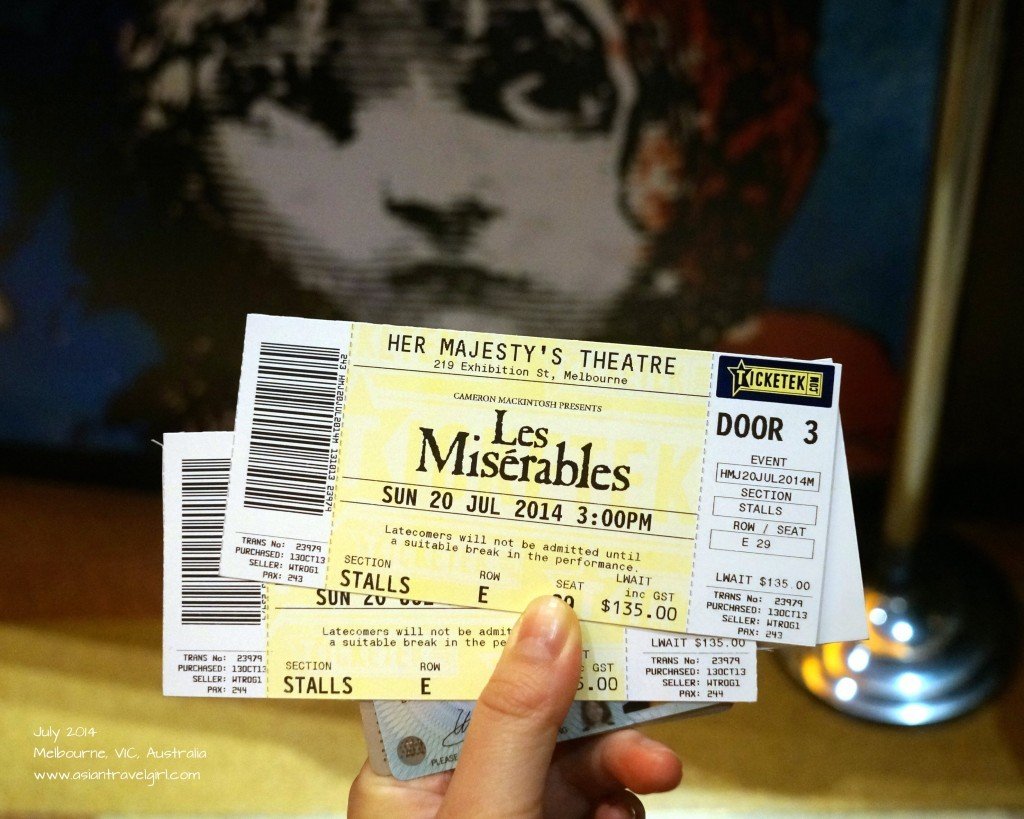 After a year we finally got our tickets!

I am not a die hard musical fan nor a proper critic, I will just write down what I think about the musical. Although I don’t know the names of the casts, we all think Jean Valjean, Fantine, Javert (the police officer), Éponine did an exceptional job at their singing. The adult Cosette wasn’t as good as what I was expecting from the main character’s daughter. I think she could have sounded better in some of her classic songs. However the child Cosette was brilliant. Marius’s singing was alright, I did think the other actor was cuter than him and have a better voice 😛 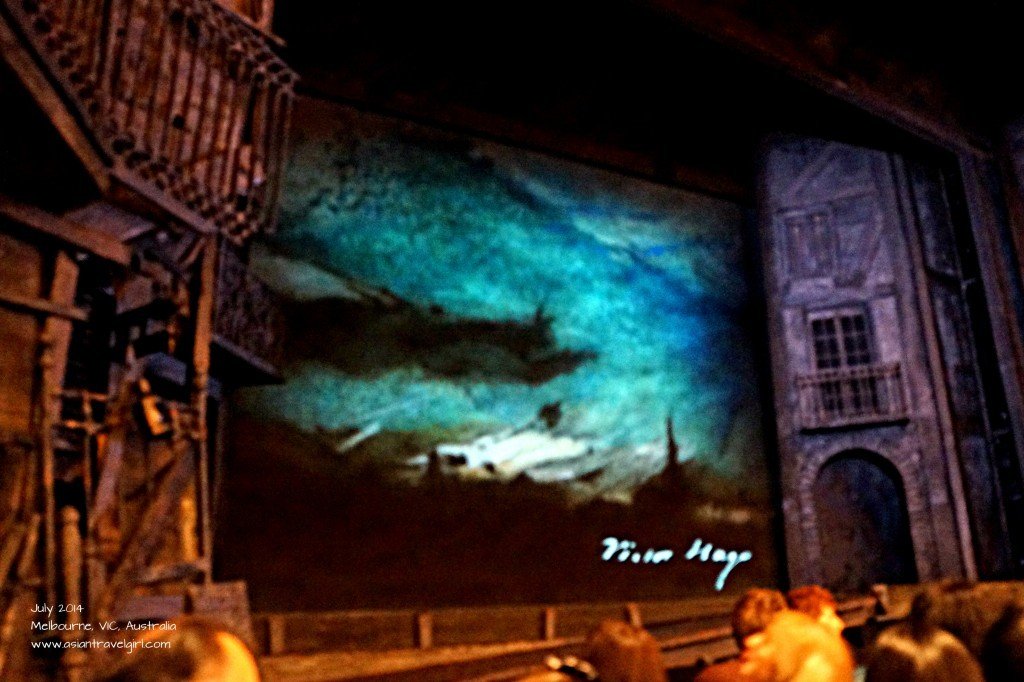 Quick snap of the stage during the break

The stages were very well made and the sound of gun fires were very real especially at the last scenes, which gave me a fright from time to time. The whole musical was dark and gloomy, so was the lighting, while it was entertaining, Laura and I did feel slightly sleepy from time to times. Our friend Erin who is a huge Les Miserables fan and has watched the other versions of the same musical is impressed with the singing. Saying Jean Valjean is the best one she’s heard so far. 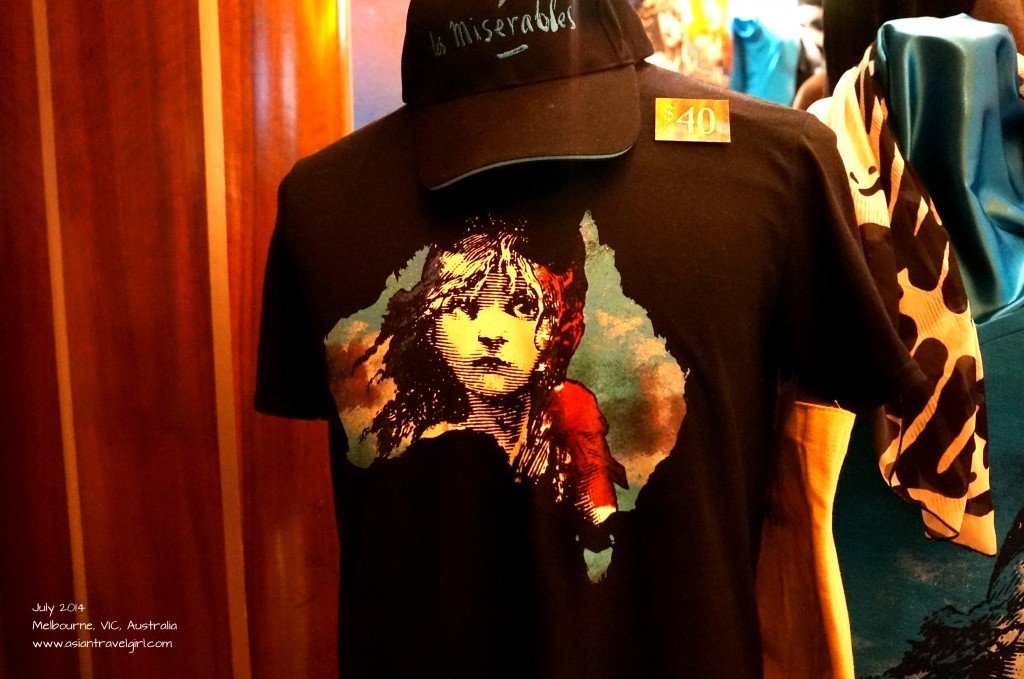 The only souvenir that caught my attention, however when will I ever wear a T-shirt like this

Overall I really enjoyed Les Miserables and it was worth me grabbing the tickets 10 months ahead. I am glad I have watched it, so I don’t have to watch it in London (like all my other friends) and can watch something else there 😀 Although one thing I wish I had done was knowing there were 392 outfits, 5000 accessories and 85 wigs through out the show, then I would’ve paid more attentions to details!