It was our last night in France and we wanted to have one last French meal before we start our adventure in Morocco. We had a fully scheduled day and we were running late so we didn’t get time to go back to the hotel to change our clothes. We were slightly under-dressed in our casual walking shoes. When we saw the beautifully decorated “Le 114 Faubourg” restaurant with fully suited waiting staff, we felt a little embarrassed and almost didn’t go in to eat. Luckily we did. 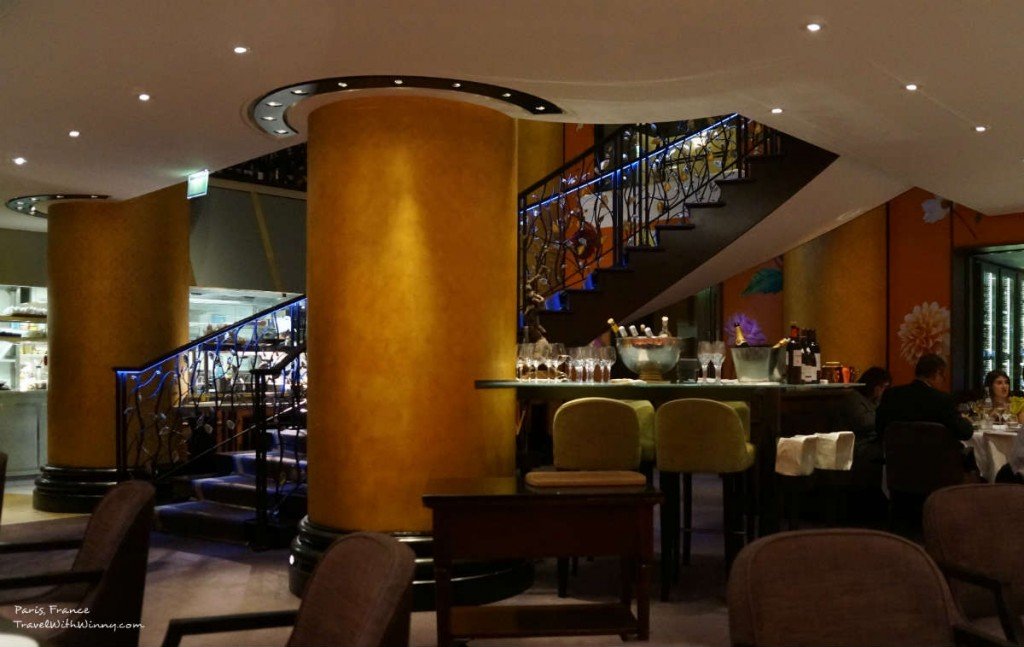 Inside 114 Faubourg. The service was amazing.

Le 114 Faubourg is located on a street with many big brands called rue du Faubourg Saint Honore and was very fancy decorated. The restaurant has a posh Asian appearance. The customers were all well dressed in business attire. One of the table was a mixture of business Chinese and French people. The waiting staff was perfect. They were nice, slightly witty but not unprofessional. Always smiling and made us felt like VIPs. They got us in such a good mood that we decided to order some wines to celebrate our last night in Paris. 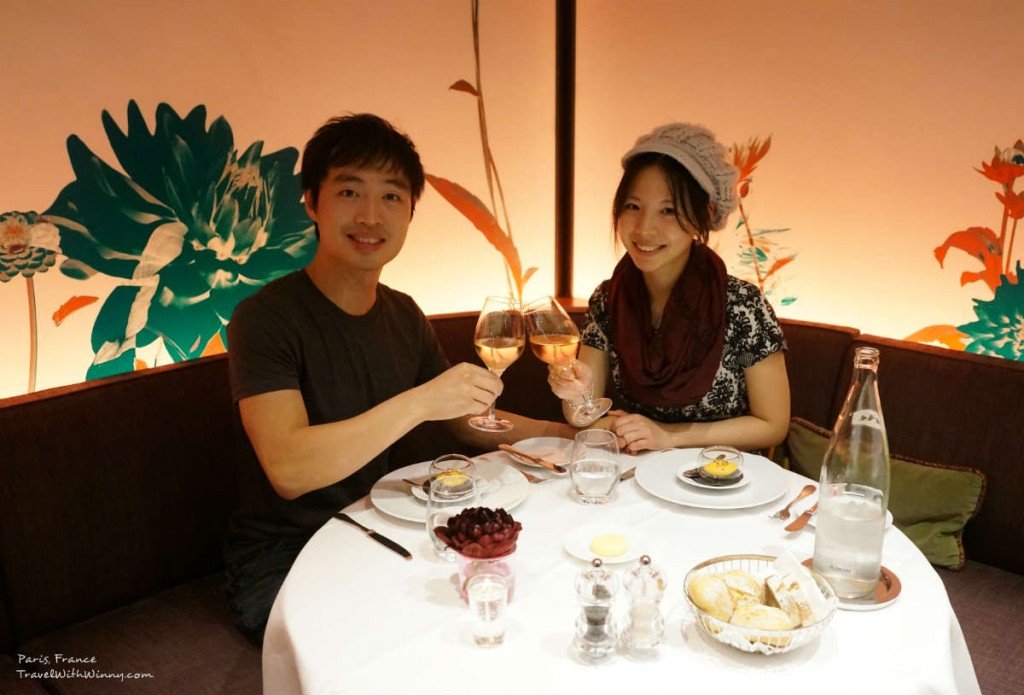 Toast to our last night in Paris before heading to Morocco the next morning. 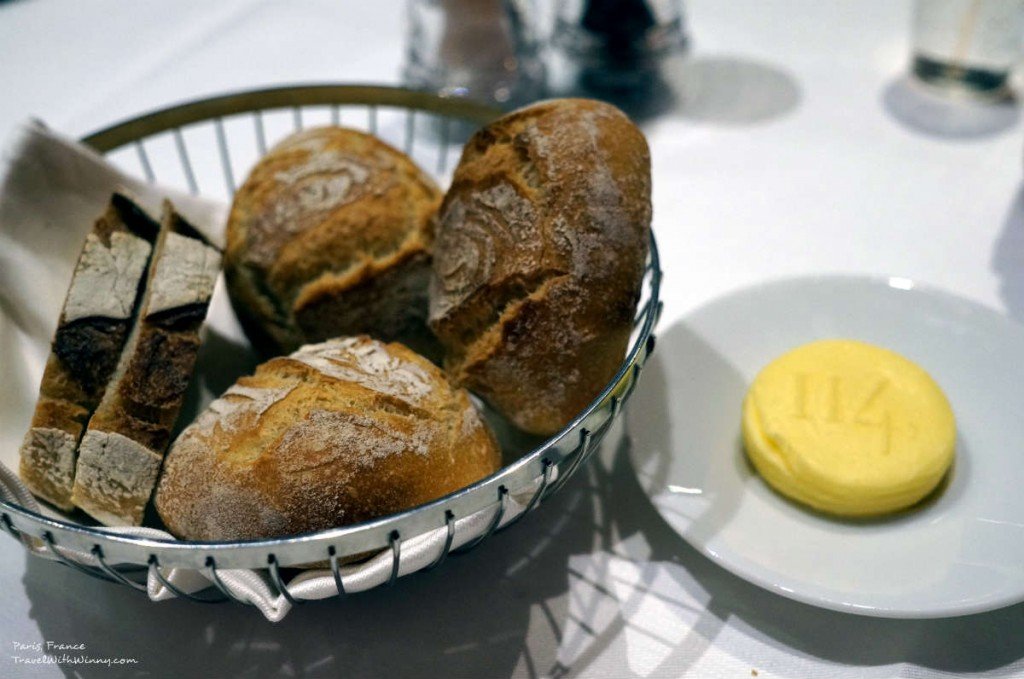 Beautiful French bread that came right after we seated. 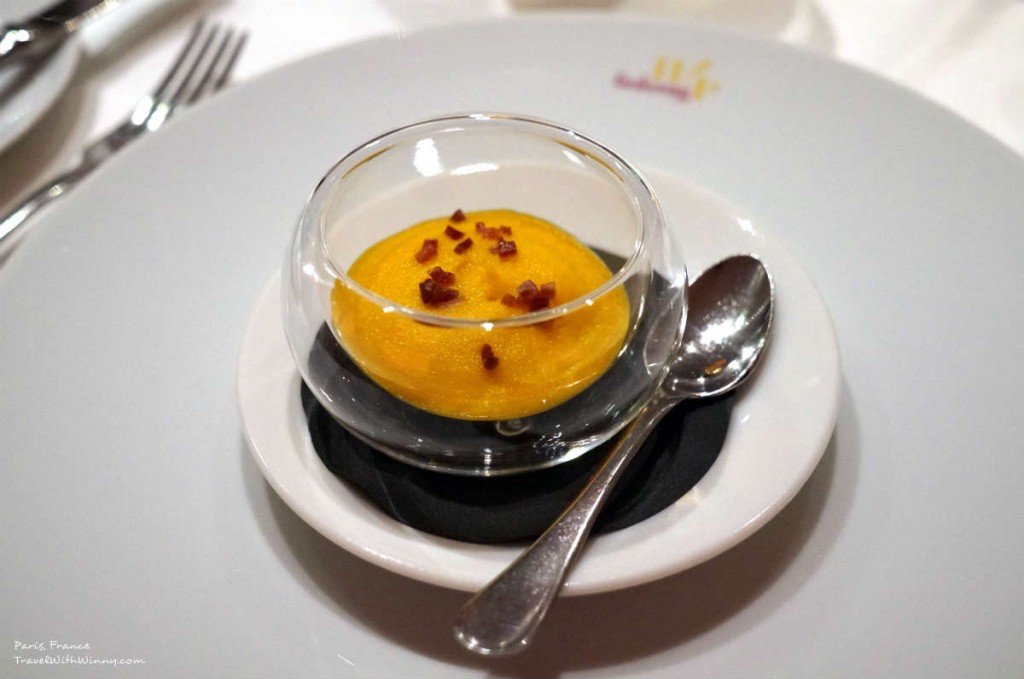 Complimentary Starter. The waiters had good English, however we were too tired and didn’t pay attention to what this dish was.

The Menu is full of beautiful descriptions of different meat and seafood. We almost didn’t know what to choose. We started our entrée with some Pan-seared frog’s legs cooked with tandoori spices and coco beans. The frog legs were flavoured well but the portion was a little small to share. We did enjoy the dish and was craving for more. 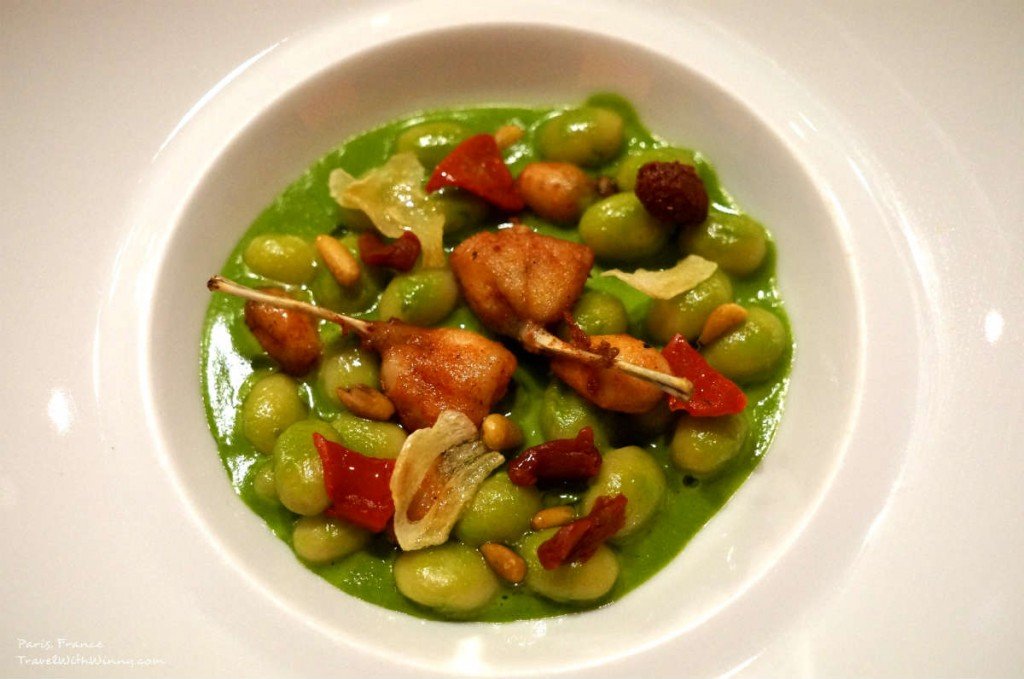 We originally wanted to order a scallop and fish dish for our mains but we ended up choosing an “Oven roasted Guinea fowl”. Please excuse my French… it was bloody amazing. It feeds two people and comes in two services. The menu said to allow 50 minutes to prepare but they said they could do it at a lot quicker time. After about half an hour wait the huge Fowl came on a rolling trolley. Two of the waiters worked on the fowl on the trolley in front of us like a demonstration show. 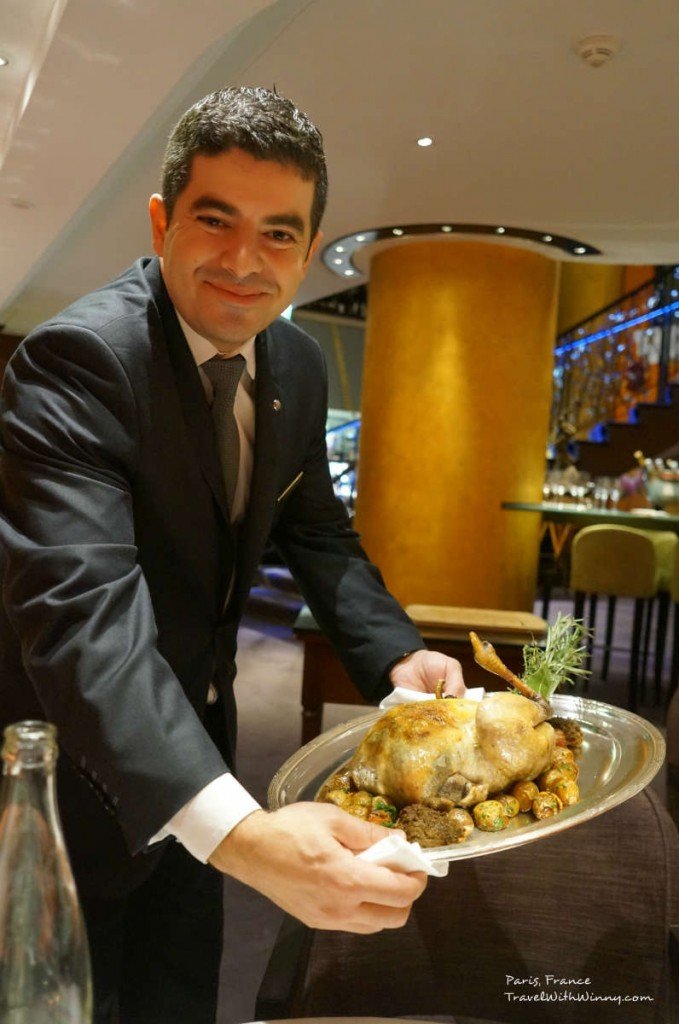 Not long we had two beautifully cut Fowl breasts served with mini baked potatoes and liver parfait served on bread. They tasted beautiful and juicy. That first serving was really filling though and took a while to finish before they served the second dish. The second dish had the fowl thighs with some salad. The second dish was as amazing as the first but we were really full by that time we were finished with it. 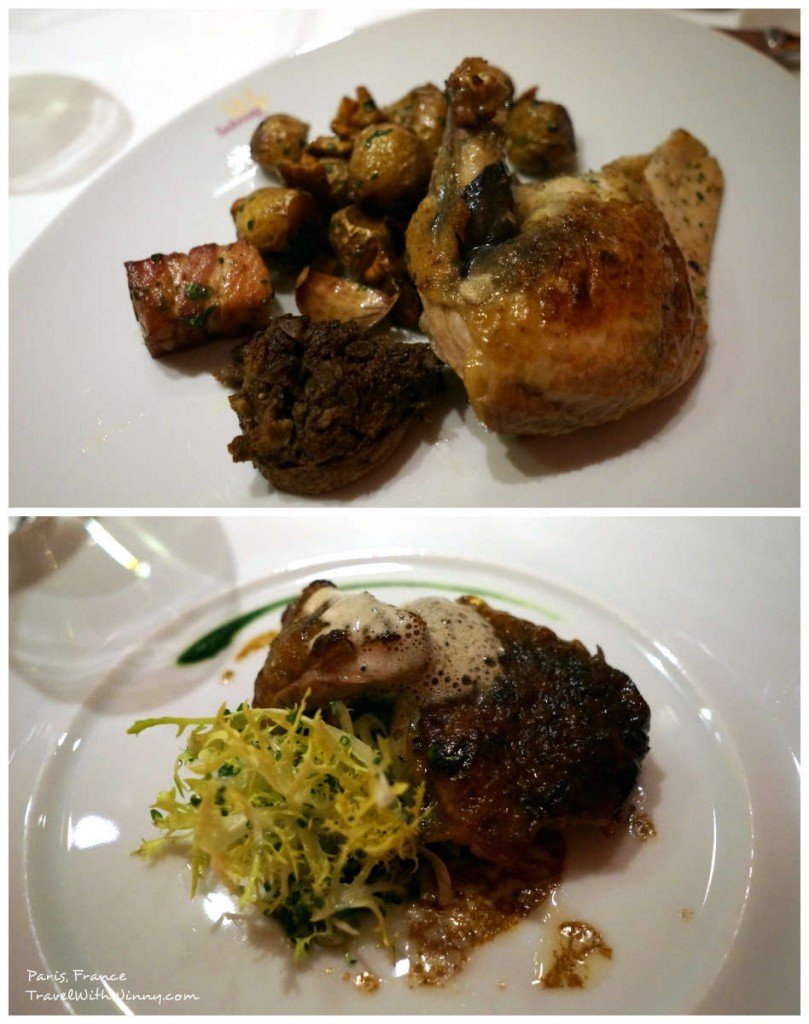 The first and second serving of this fowl. Essentially it was a double entrée.

They did have a wide range of deliciously described desserts but we were too full by that point. We really enjoyed Le 114 Faubourg, especially the service. Even though we were under-dressed, we were treated as if we were in a 3 Michelin star restaurant. The food was great as well. I would recommend this restaurant to anyone who visits Paris. 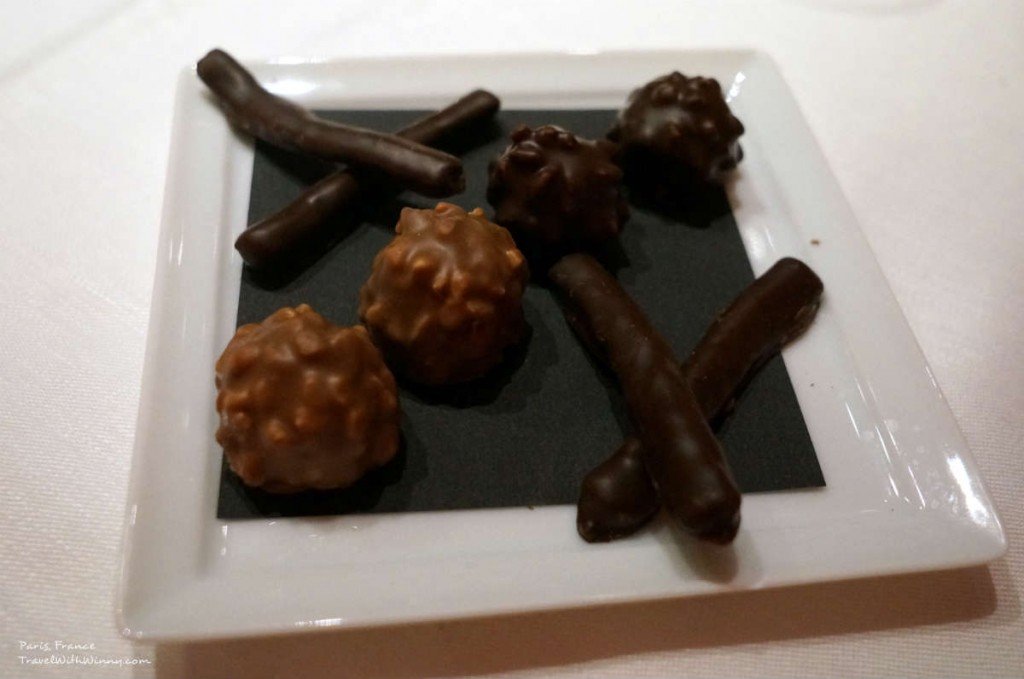 PS. € 54 served for lunch time during only. In the menu there will be a selection of the dishes identified for lunch special, choose a starter and a main dish or a main dish and a dessert.

Below is also a video of the waiter cutting up the fowl in front of us.