North Korea has long been a mysterious country that still hides behind the iron curtain even this day and age. For many keen travellers, this is one of the last frontiers they would like to conquer on their world map. However, visit North Korea may be a lot easier than you think. 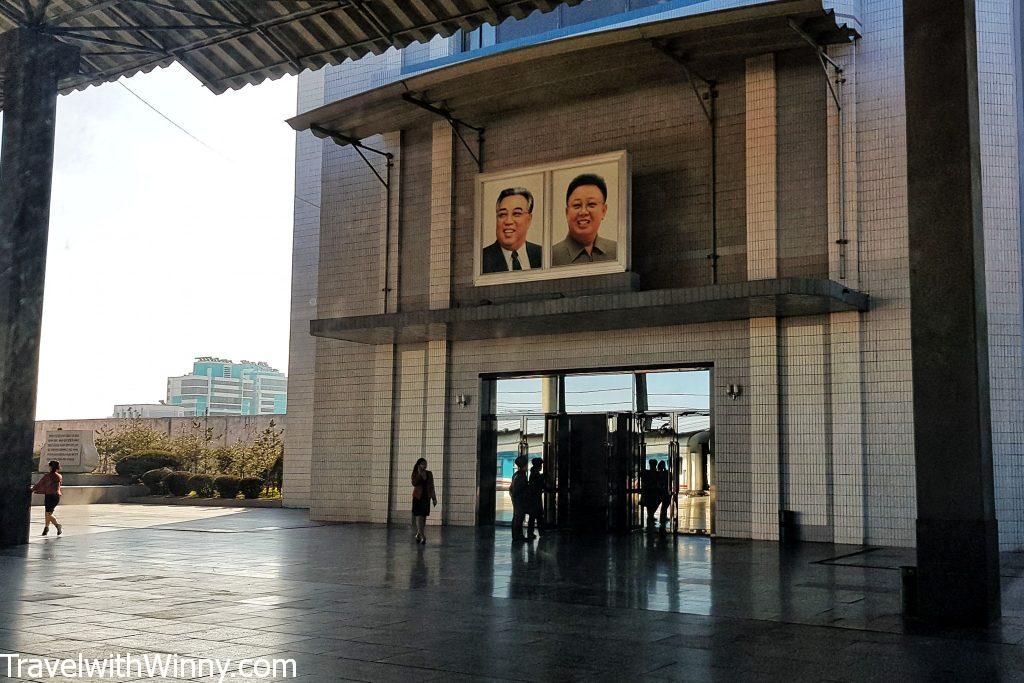 As soon as we arrived at the border city of Sinuiju, we saw portraits of Kim Jong-il and Kim Il-sung on the wall.

Although there may be restrictions, all you need to do is have the right passport and find a travel company who’s willing to take you there! Below is a summary of what we learnt from our visit to North Korea on a 4D3N tour from Dandong! 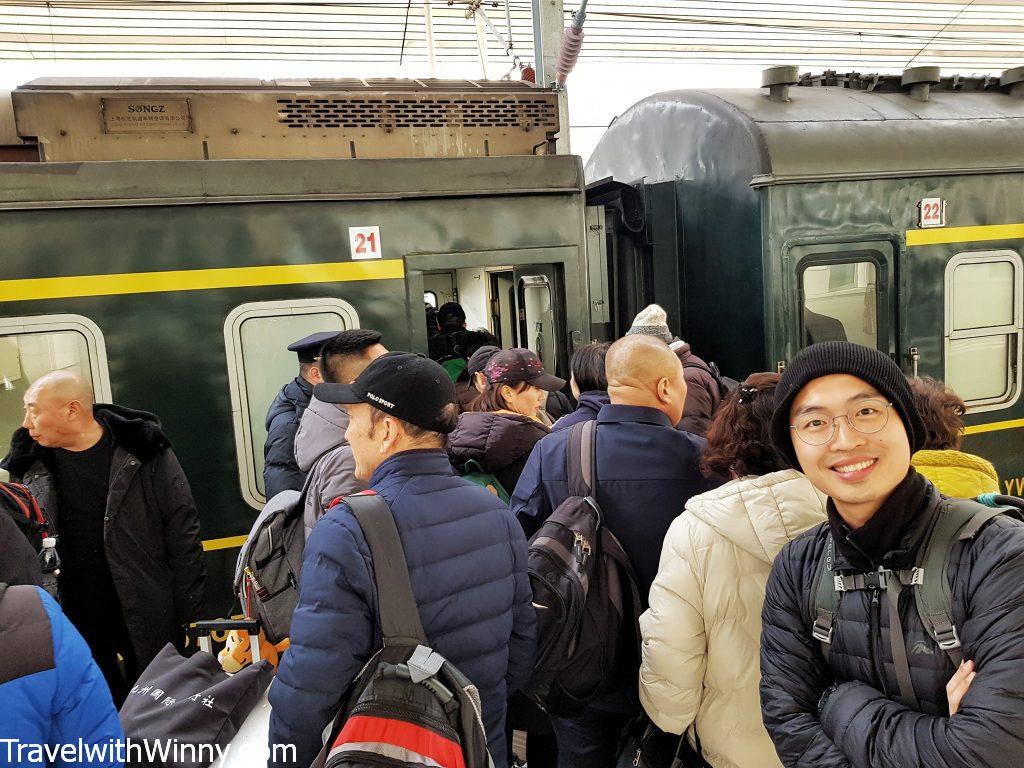 Visiting North Korea is actually not that hard! Hop on to the train in Dandong then we can go straight to Pyongyang.

Who can visit North Korea?

Basically anyone can visit North Korea other than people from South Korea or journalists. As you will have to join an organized tour to visit North Korea, the tour company can easily organize the visa for you which normally takes 10 working days. 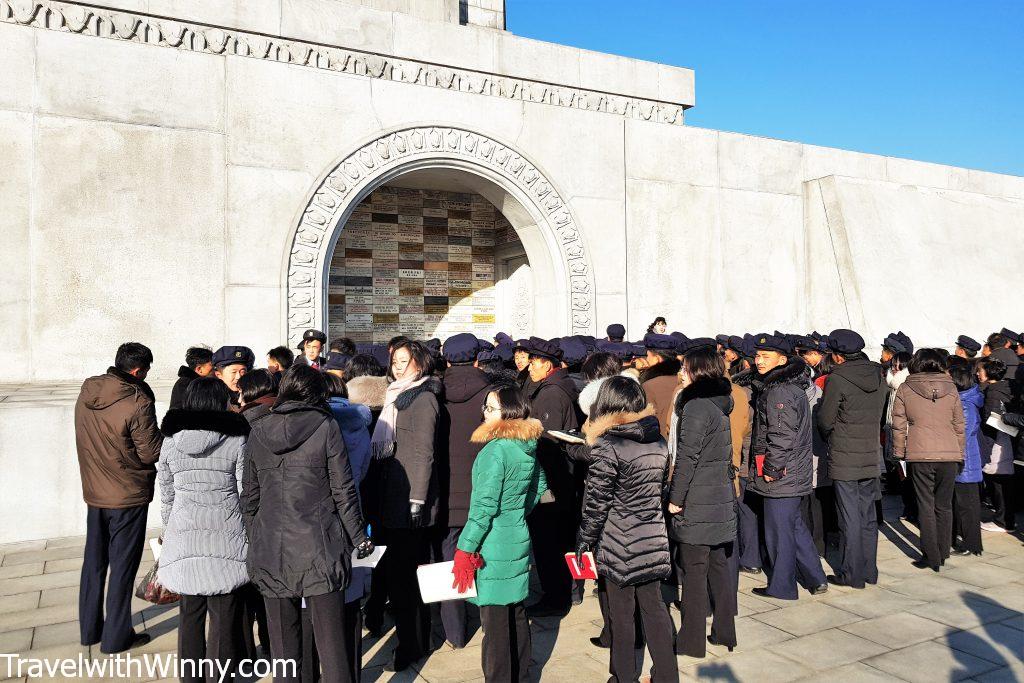 You will always be in a group when visiting North Korea. Picture taken at Juche Tower in Pyongyang.

Under the current policy, you are not allowed to enter the USA using ESTA policy (electronic visa-free) once you’ve been to North Korea. One will have to get an actual US visa to travel into the country, which is troublesome and costly. My friend actually got rejected transiting in the US en-route to Europe because he’s visited North Korea a few months ago. 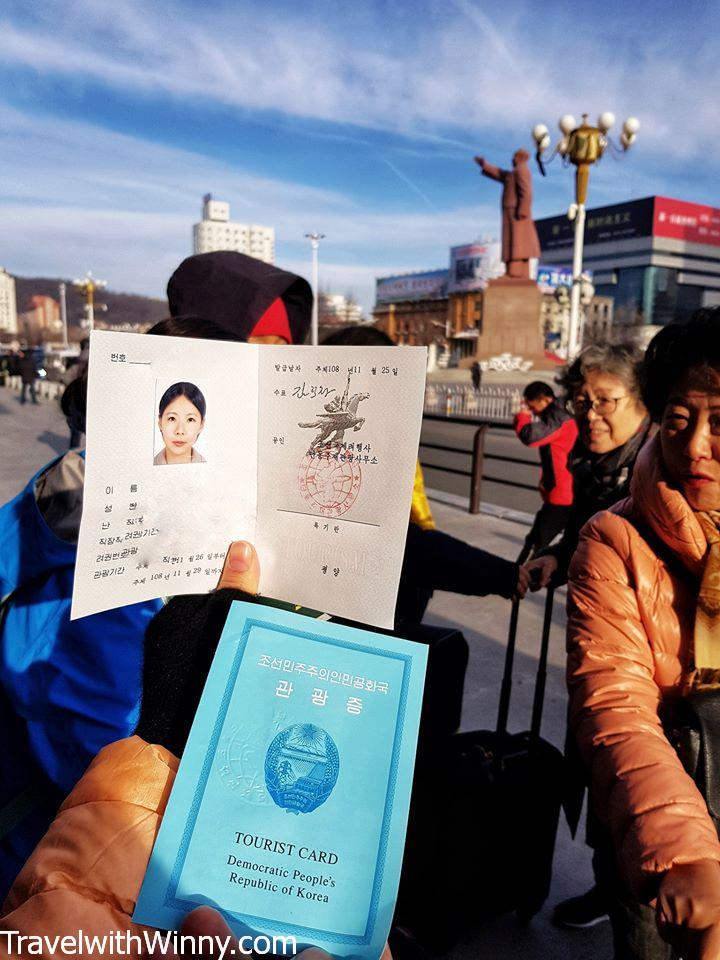 You can get a tourist card instead of an actual visa on your passport.

Another way around it is to get a blue “tourist card” instead of getting an actual visa on your passport. The North Korean customs will take the card back so technically it’s like you’ve never been to the country before. However, it all depends if you have the guts to lie to the US officials when they ask you if you’ve been to North Korea or not.

How to visit North Korea?

There are only two ways to enter the capital Pyongyang, you either fly in or take the train. Majority of the tours starts from the border city of Dandong. Though you can start your North Korea tour as far as Beijing. However, tours starting at Dandong are usually the cheapest. 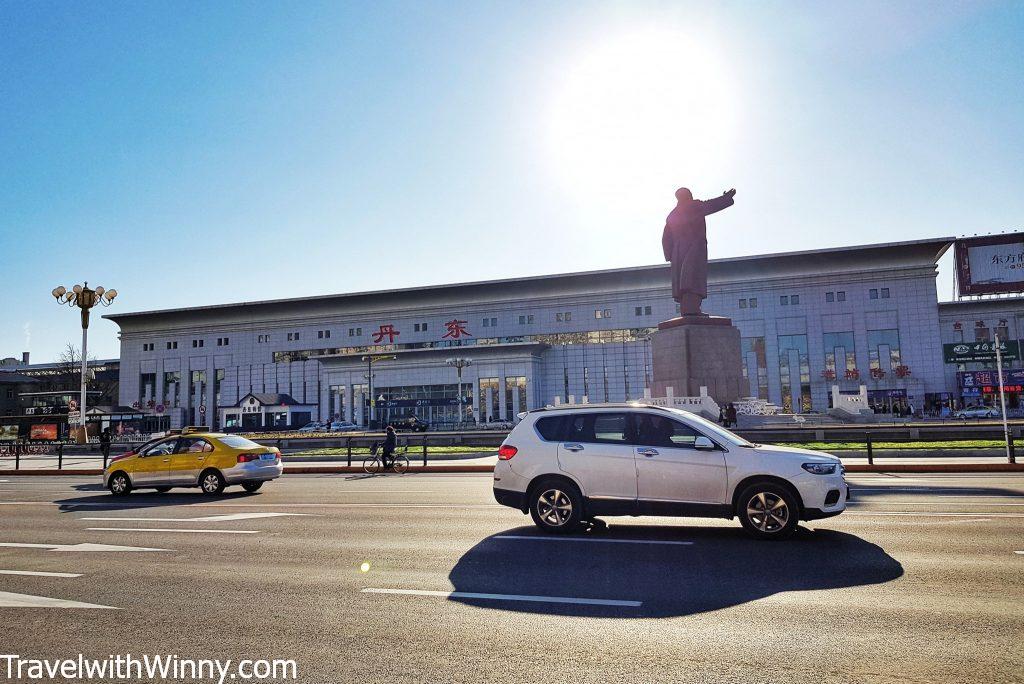 Chinese tours depart daily, English tours will be more scarce, maybe once a week. Bear in mind that many tours companies will combine you with other tour groups when reaching North Korea. Some people did have bad experiences where they ended up with a non-English group/ guide. 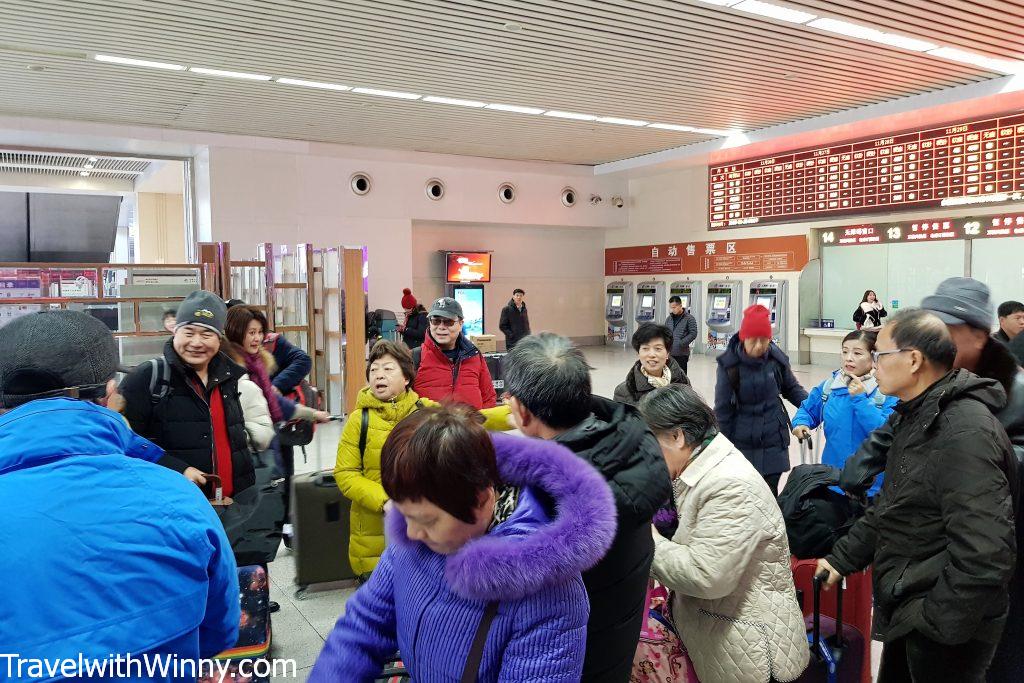 It seems like Chinese people love going to North Korea, each tour has more than 40 people!

As the Westerners will have to stay in the first-class hotels, the tour prices will be considered more expensive than Chinese nationals who have the option to stay at the cheaper accommodations. You will be looking at 4300 RMB – 4500 RMB per person. 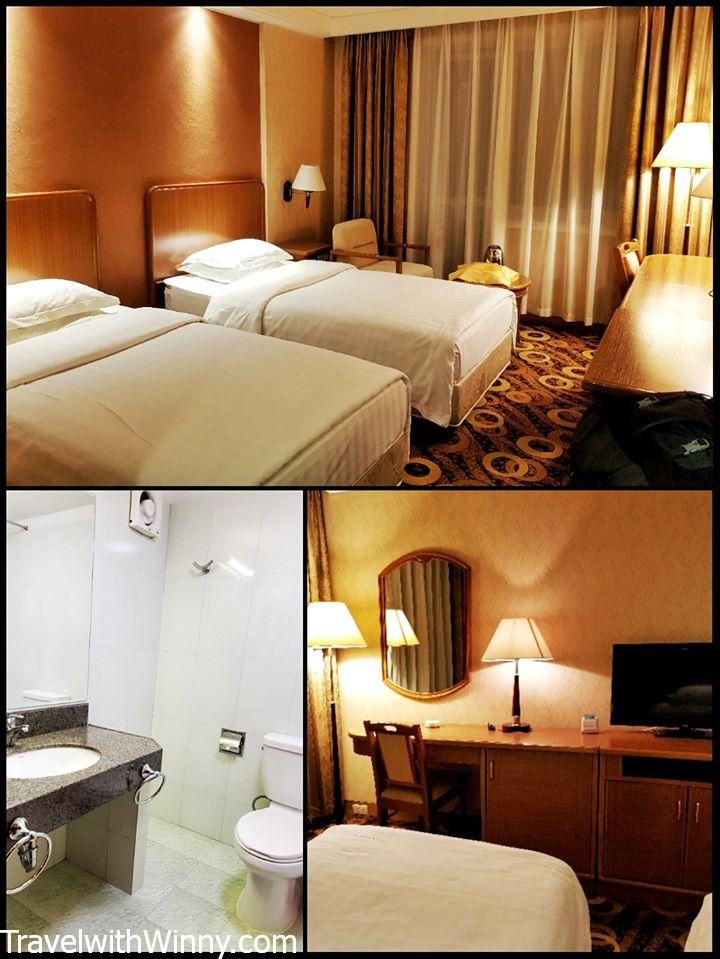 We stayed at Sosan Hotel which is one grade below where Westerners usually stay in. However, it was surprisingly quite pleasant.

The company I used is Explore North Korea, a company with a 5-star rating on TripAdvisor. The lady Sabrina speaks good English and was able to provide me with useful information such as the bus time to Dandong from Shenyang airport and any other inquiries I had before the trip.  Once you have the tour company sorted, send them the photos and documents needed, it’s pretty much a stress-free trip. 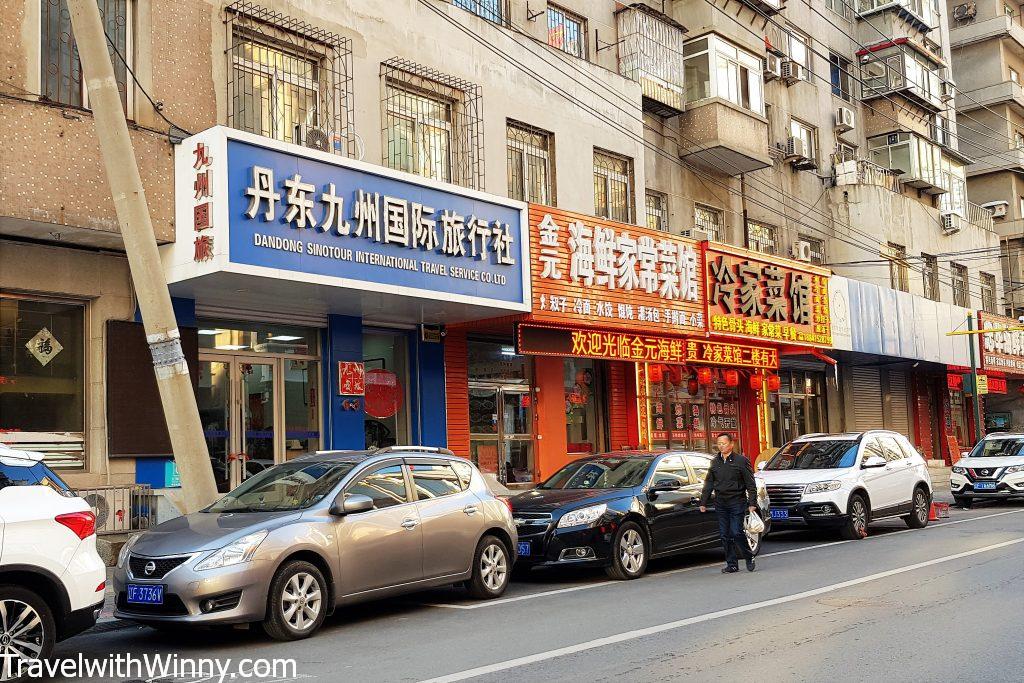 The tour company we used is “Explore North Korea”, but they have an office in Dandong which operates under a different name.

Will I be hungry during my North Korea tour?

While there are on-going food shortages in North Korea where the country frequently receives foreign food aid. There is definitely no shortage of food while you visit North Korea. In fact, I was so well-fed during my four days there, I actually gained weight! 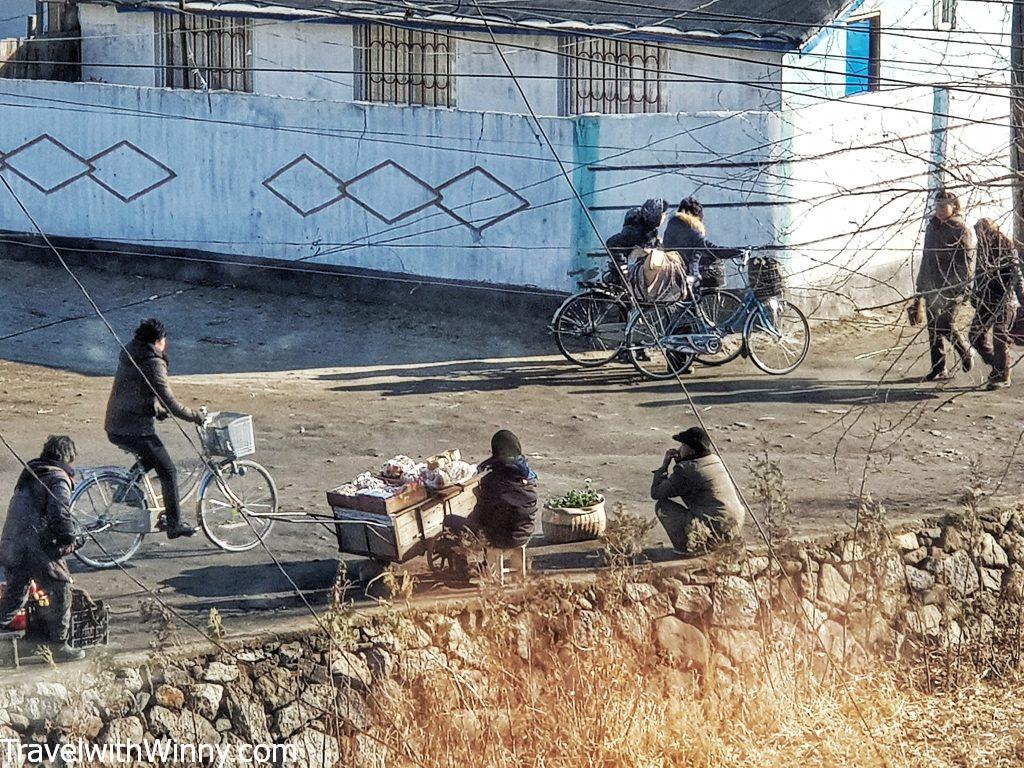 There are random episodes of food shortages in North Korea but definitely won’t happen if you are a tourist! This picture was taken on the train to Pyongyang.

The government has planned an itinerary where tourists get to sample different kinds of Korean cuisines, from kimchi to hotpot, each meal stop is different. In the ancient city of Kaesong, we even had traditional cuisine that was specialized in that region. 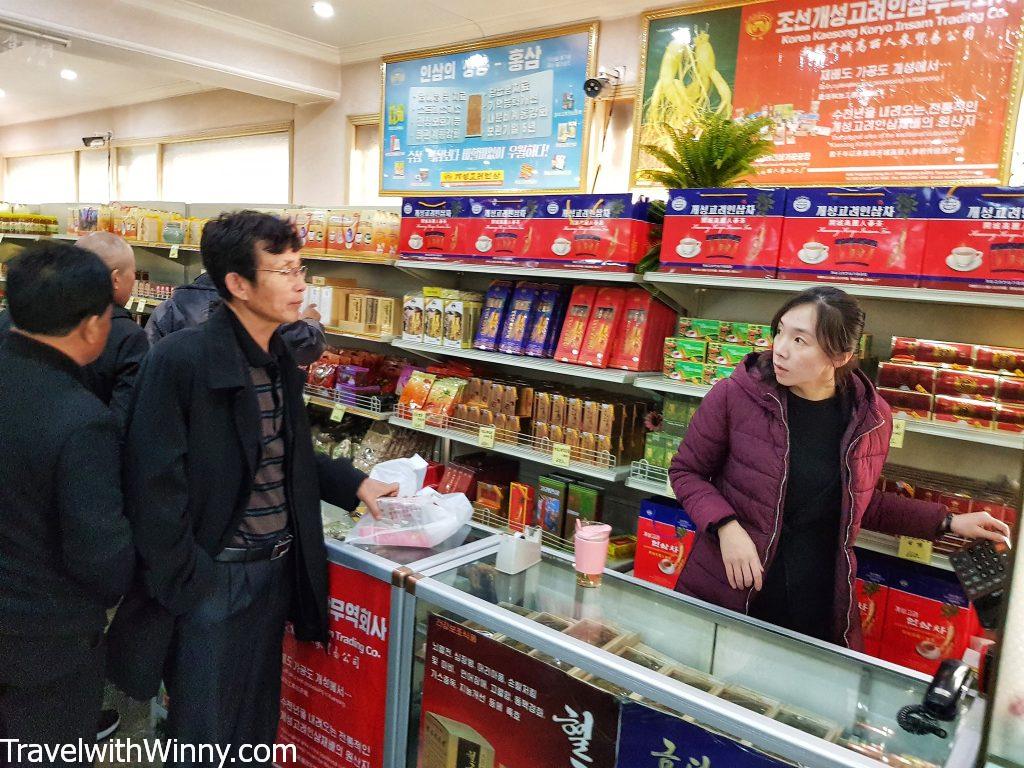 At one of the touristy shops that sell snacks and other souvenirs. Apparently you aren’t supposed to take photos here as it may affect their foreign food aid.

Other than breakfast, there was actually alcohol with every meal. We got to sample soju, North Korean beers, rice wine and all sorts. There isn’t much meat in the cuisine, but vegetables are plentiful. I felt like I had a very healthy diet during my 4 days stay there. 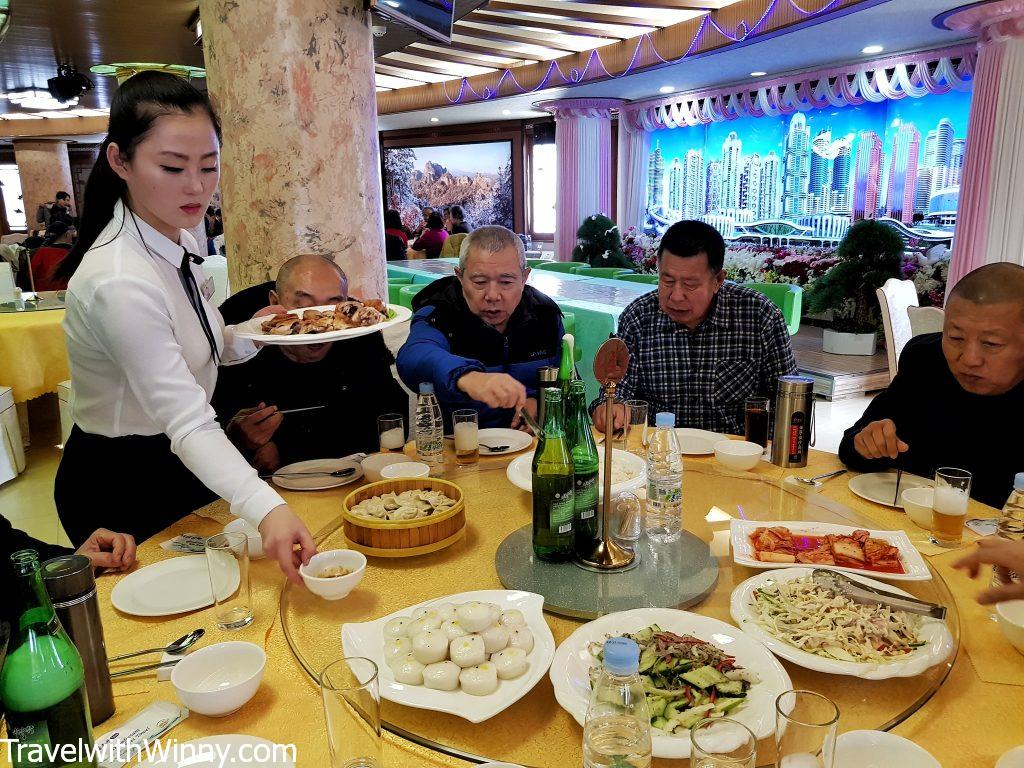 The meals planned by the tourist departments are meant for us to sample different types of North Korean cuisines.

You are able to bring fruits into North Korea (but not back into China), however, I don’t think that’s necessary as you do get all the fibre intake you need in every meal. Therefore, definitely there’s no need to worry about getting hungry on a North Korea tour! 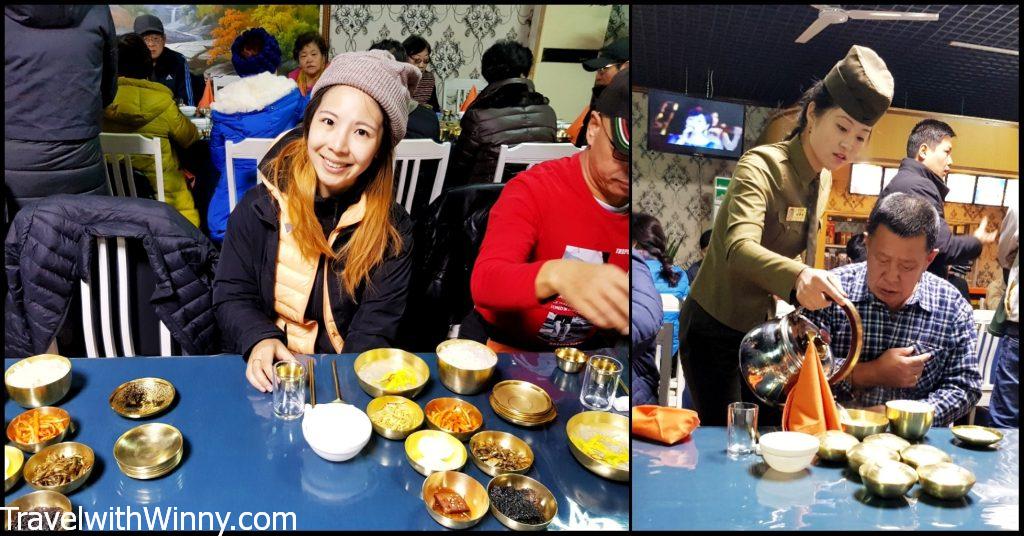 We even had lunch in DMZ and tried local Kaesong specialties!

What kind of currency do they use in North Korea?

North Korea has their own currencies, but tourists are not allowed to get their hands on it. You are able to use Chinese Yuan or Euros. Unsure about the usability of USD as North Korea and the US aren’t exactly best friends. If you do want some North Korean money as souvenirs, then there are people selling them along the Yalu River in Dandong. However, the tour price does include EVERYTHING, so I didn’t spend a cent extra after than my tour fees and the special supercar drive days Melbourne has to offer 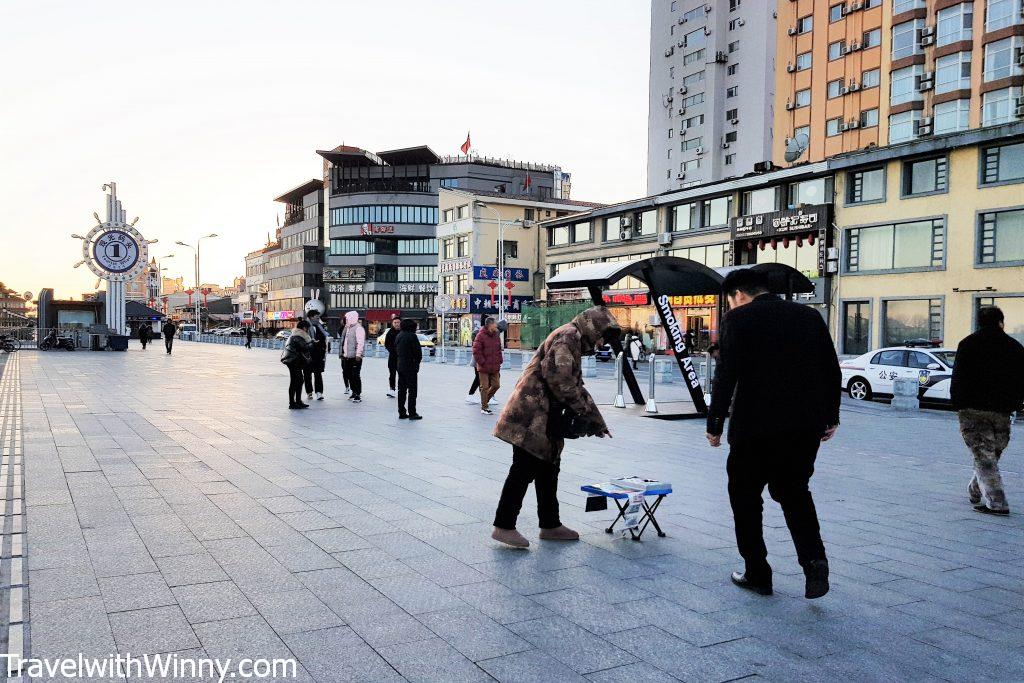 There are many people selling North Korean money along the Yalu River in Dandong.

What can you bring into North Korea?

According to the laws in North Korea, you are not able to bring in binoculars or cameras with zoom range over 150mm. You can bring in your phones, laptops, cameras, GoPros providing there are no propaganda images inside. 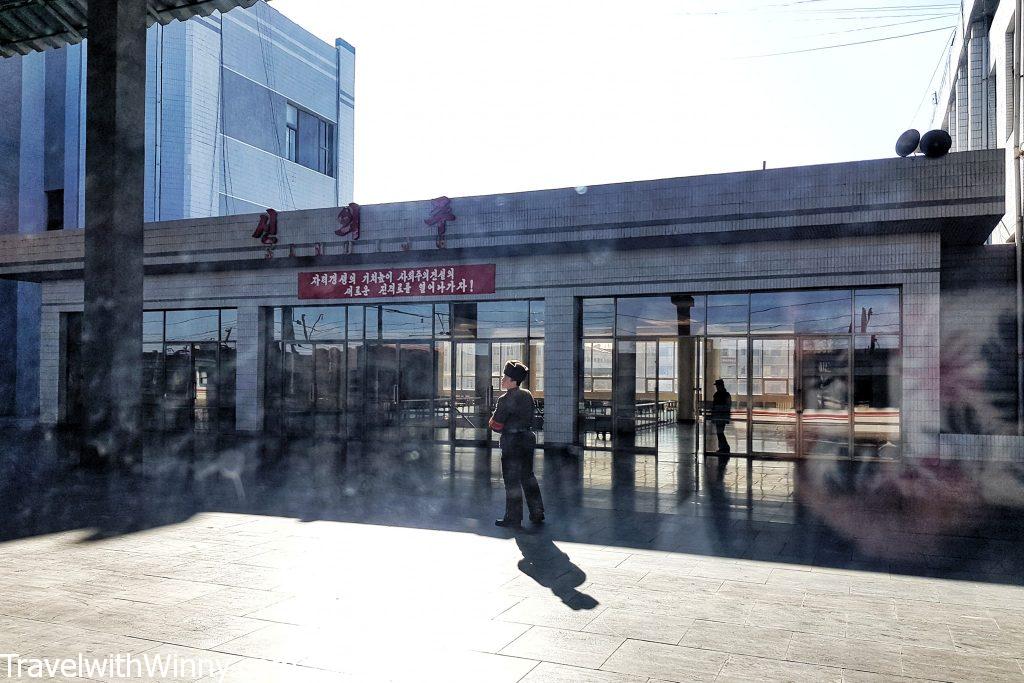 The customs at Sinuiju really do a thorough search through your bags.

When you arrive at the border, the guides will note down the brands of your electronics and placed them in a bag with others. Apparently they will check the contents inside to make sure you didn’t any “wrong” pictures. However, our phones were locked so I highly doubt they checked it. 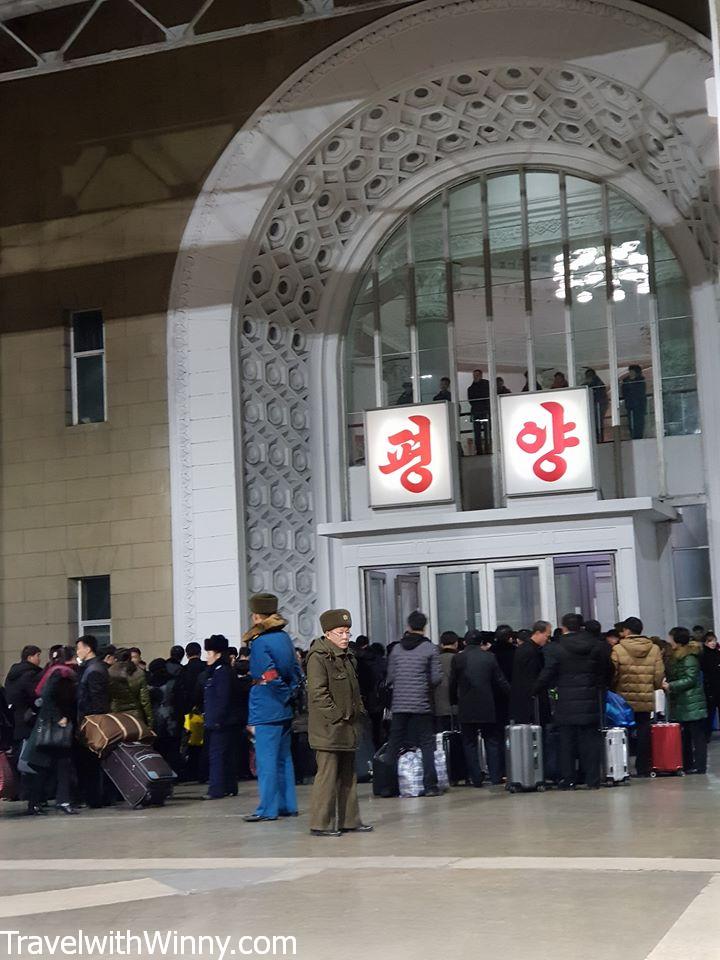 The governments do not want people to have telephoto lenses to take pictures of classified items.

You also can’t bring anything related to Western media, that means books, newspapers can be a problem. Another thing is, I usually carry a diary with me. That got searched while I was leaving the country. The custom flipped through every single page to make sure I didn’t write any vital information that can breach their national security. Honestly, if I did, it would be on my phone, not paper… 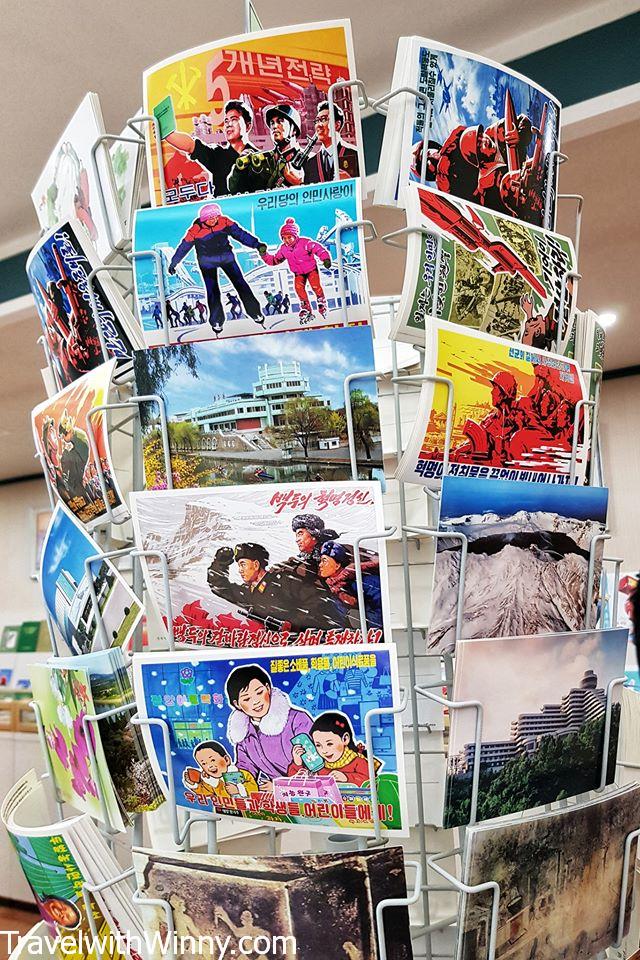 North Korean propaganda postcards for sale in Pyongyang. They certainly don’t allow others to come into the country!

If you don’t want to bring everything into Korea, you can either store them in Dandong train station for 10 RMB per item per day. Or you can leave it at your hotel, in our case, we choose to stay in Hilton Garden Inn and leave our luggage there. It was free and felt more secure as it’s an international brand that we are familiar with. 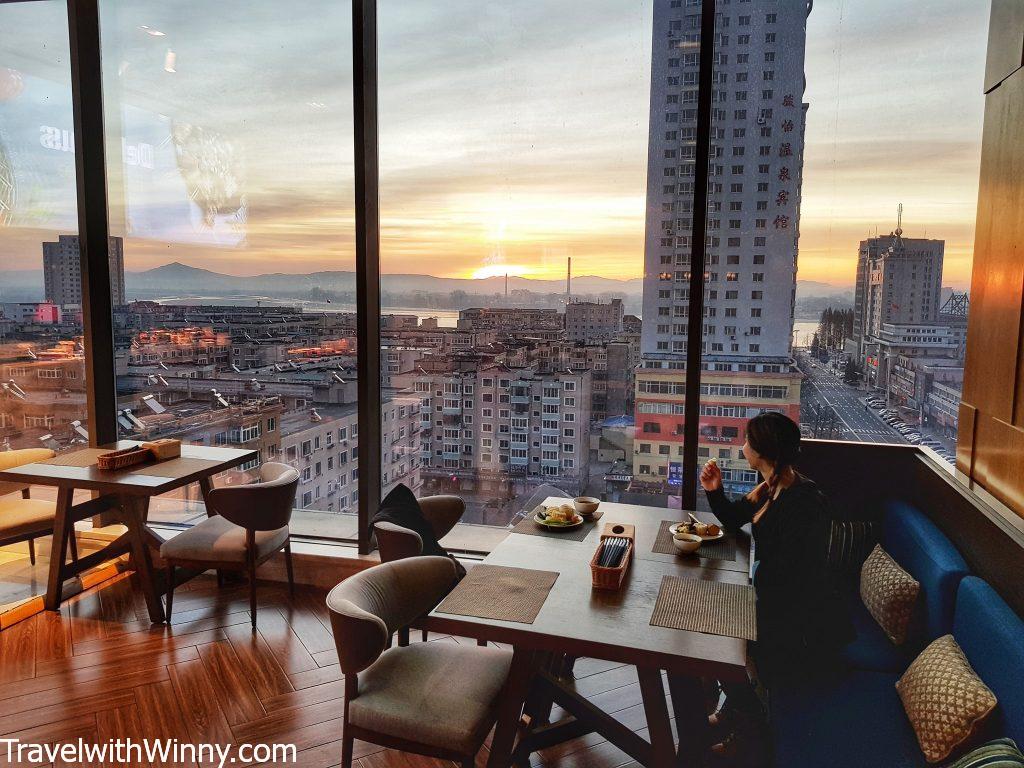 The Hilton Garden Inn in Dandong we stayed in had a beautiful sunrise over the Yalu River looking at North Korea. This was during breakfast. The room rate was around USD$50 per night.

Heard there are a lot of restrictions when visiting North Korea, is it true?

It is true that when you visit North Korea, there are rules you will have to obey. First is that you have to go on an organized tour. There will be a guide accompanying you at all times. PLUS a national security person watching your back, making sure you don’t do anything that will breach their national security. These national security people will not reveal their true identity, ours was introduced as an intern. 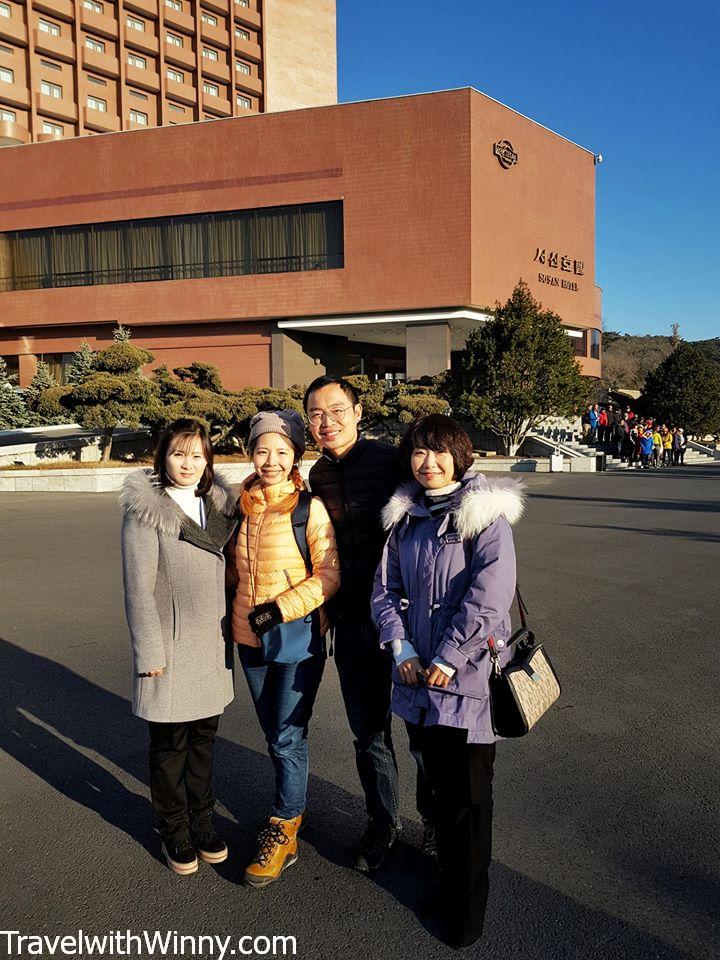 Our guide & “intern” throughout our four days in North Korea.

Other rules are: do not leave the group at all, do not wander outside of the hotel at night. Do not take random photos through the bus windows especially at commoners or soldiers, do not talk to the locals (they are scared of you too). If you are taking pictures with statues of Kim Il Sung and Kim Jong-il in the background, you can’t copy their poses or do silly ones. 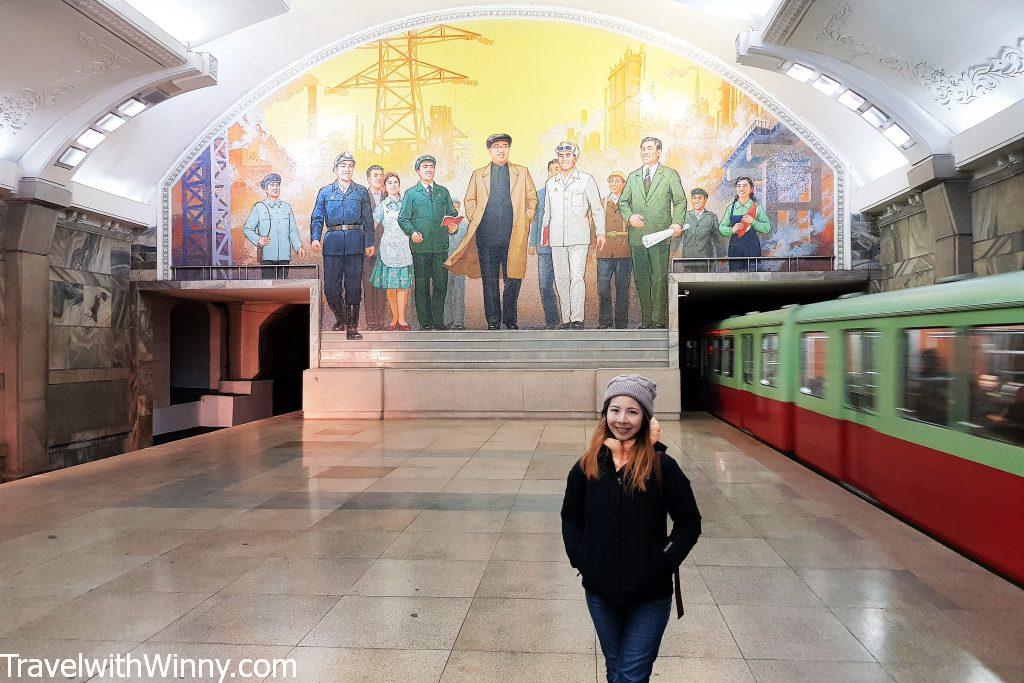 Mosaic of the great leaders in Pyongyang metro station, hence you got to be proper when taking pictures with them in the background.

Another thing to beware is that do not ask political sensitive questions, although the guides are usually very good at dodging your questions. The Chinese group I was with asked the guide if there are tunnels going down DMZ? Also questions like which city will be the capital once North and South Korea unifies? However, just to be safe, better watch out on what you asking. 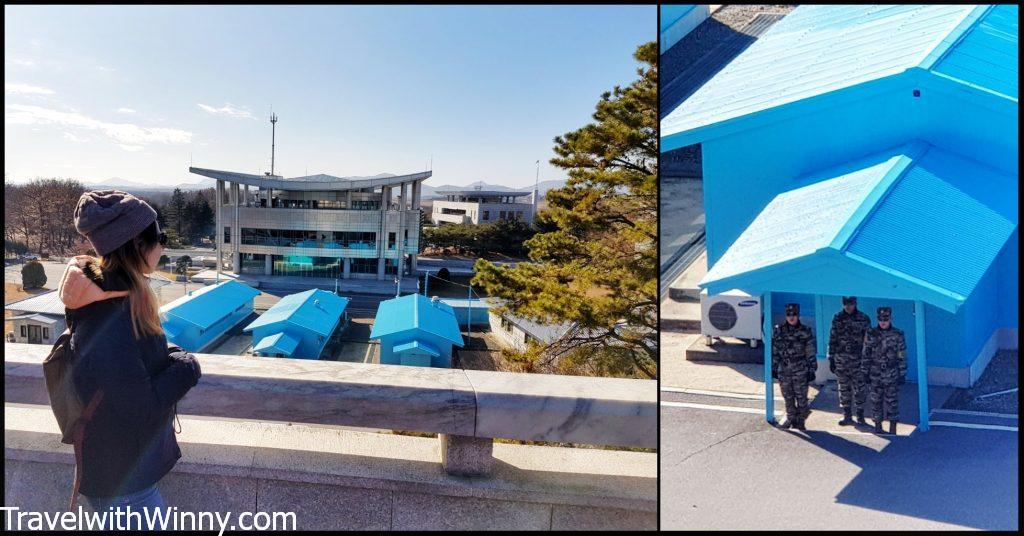 Even at DMZ, the Chinese people were not afraid to ask questions!

What else to keep in mind when visiting North Korea?

There is no internet available in North Korea, so even with a VPN, you cannot go online. 3G is available in the country, however, the prices of sim cards are ridiculous. There are also power shortages throughout the country, less so in Pyongyang. We didn’t experience any during our stay in our hotel but did experience a few while we were having dinner. The powers all came back within a few seconds though. 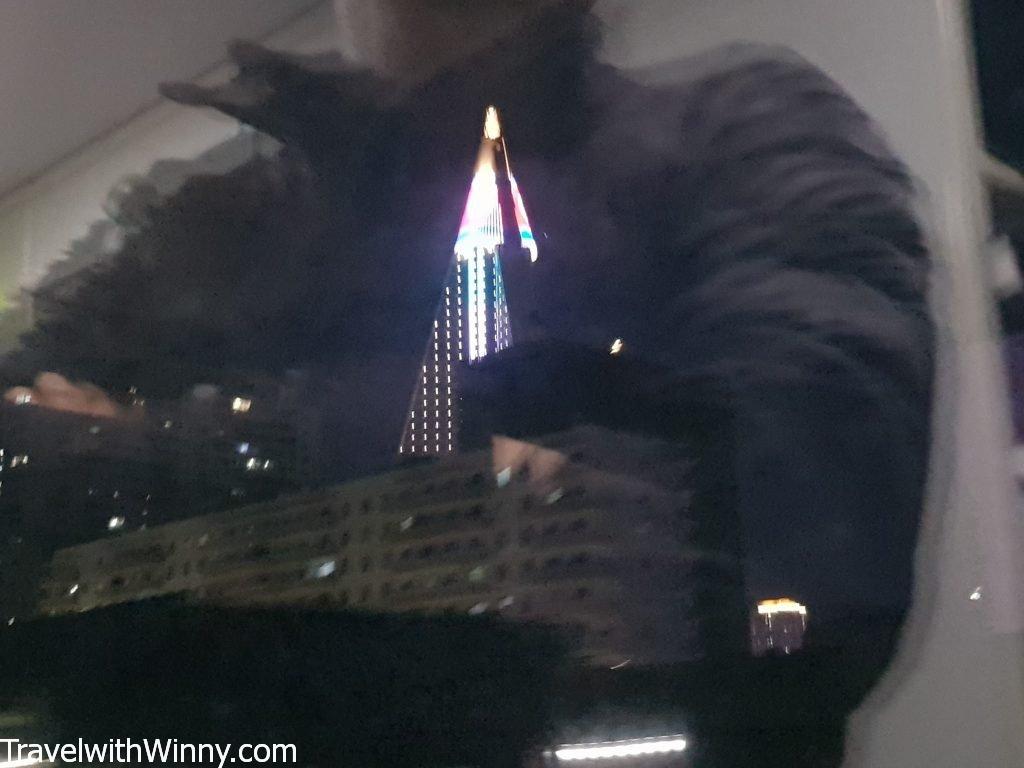 It’s pitch black when looking out the train window until we reached Pyongyang. Definitely not every has got power. 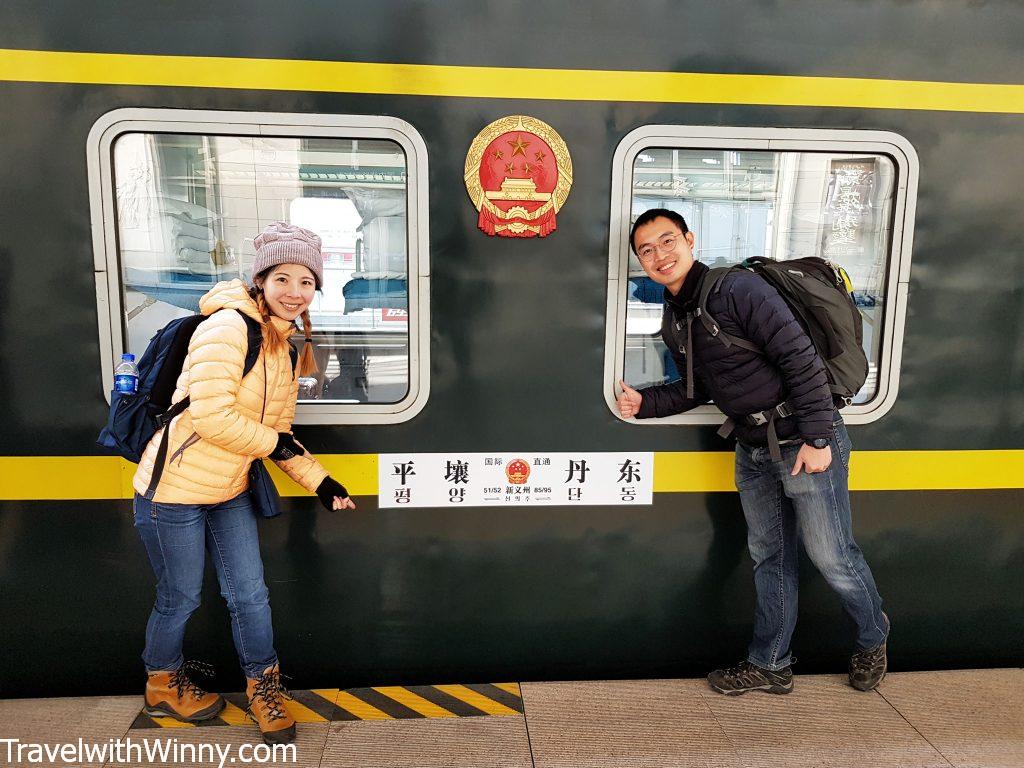 The train from Dandong to Pyongyang! This trip is definitely a lot easier than you think!