With my legs tied, I could hardly walk. I was lifted by two men to the edge of the bridge and I stared straight down over two hundred meters of sheer drop. Loud techno music was playing on the background but all I could hear was the beating of my heart. There was a moment where I felt everything paused. I felt like my life is about to end and my body was adrenaline full. The guy next to me asked if I would jump myself or would I liked to be pushed off the side of the bridge. I turned forward looked at the camera leaped with my arms wide open and challenged the highest bungee bridge jump in the world. In Africa there way more activities to do if you aren’t into such an adrenaline rush then you should consider checking out this tanzania safari tour. 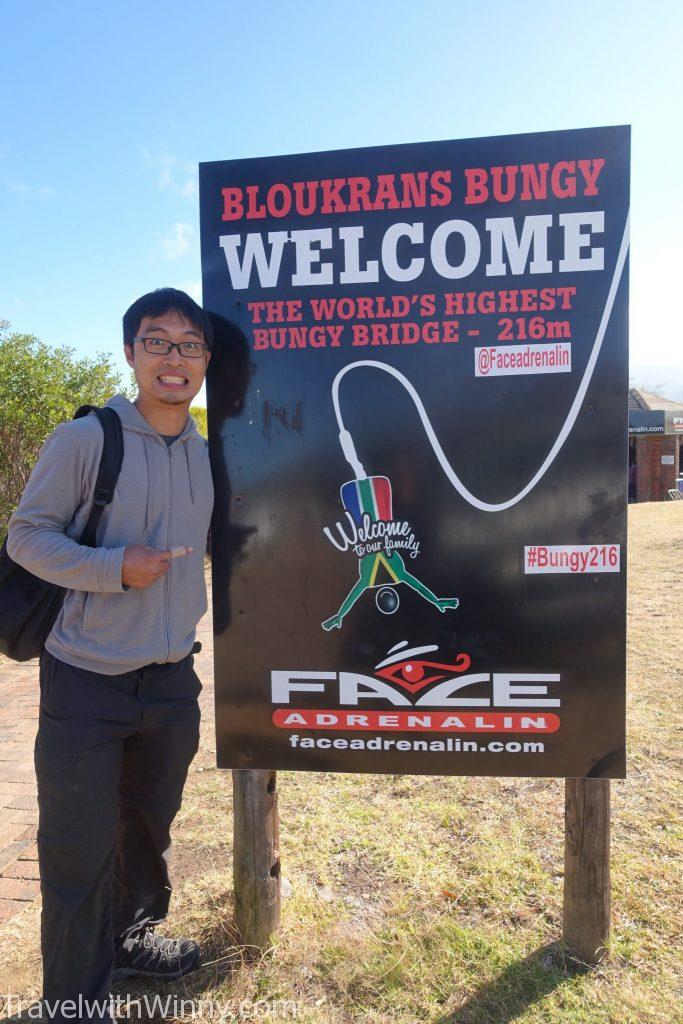 Highest bungee bridge jump in the world. That was what caught my attention when I was doing my research on South Africa. As I am a bit of an adrenaline junkie, I thought I would definitely give this challenge a go. The location of this bungee is at Bloukrans Bridge and it was in fact the highest commercial natural bungee jump in the world at 216 meters in height. The cost to do the jump is 990 South African Rand which is equal to $95 AUD. I made the booking of the bungee jump on their website but you can also make the booking on the spot at their office.

As we were self driving in South Africa, the location was easy to find and get to. We knew exactly where the bridge was when we arrive because it was one massive bridge spanning a huge distance. We had to cross the bridge on our car before turning into the site where the office is located. 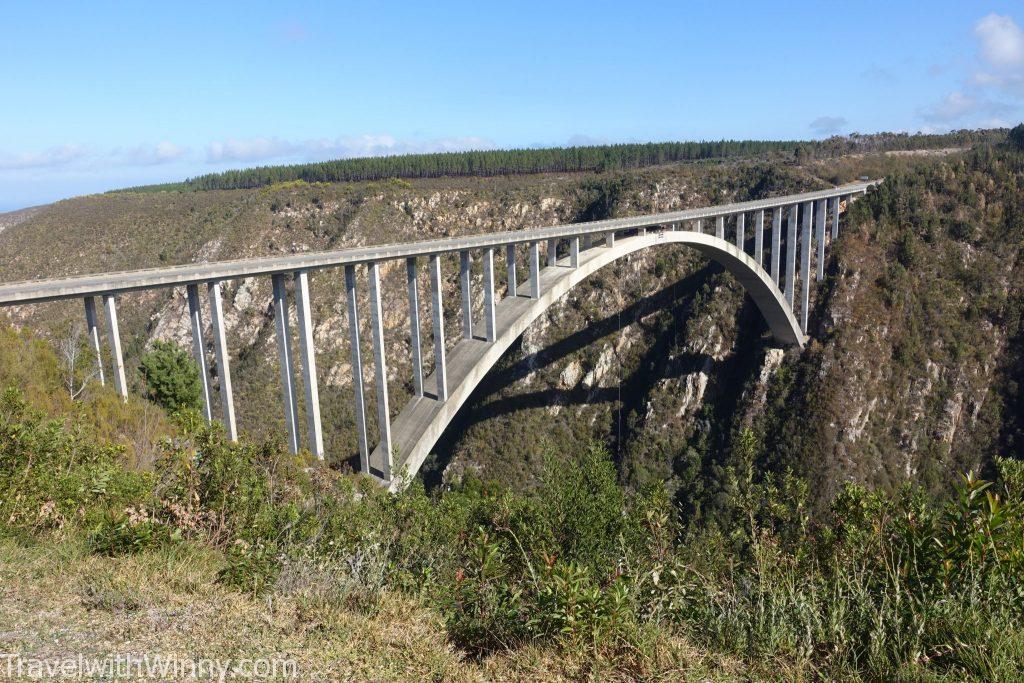 Seeing the Bloukrans Bridge for the first time was very memorable. It was a huge bridge spanning large distances. No wonder it holds the record for the highest bungee bridge jump.

There was an office where we could sign up for the bungee. There was also a canteen and a look out section where we could see bungee jumpers from afar. As Winny wasn’t jumping she found a spot on the lookout and waited for me to jump. We waited around half an hour before I was called to a meeting spot and we began walking towards the centre of the bridge. 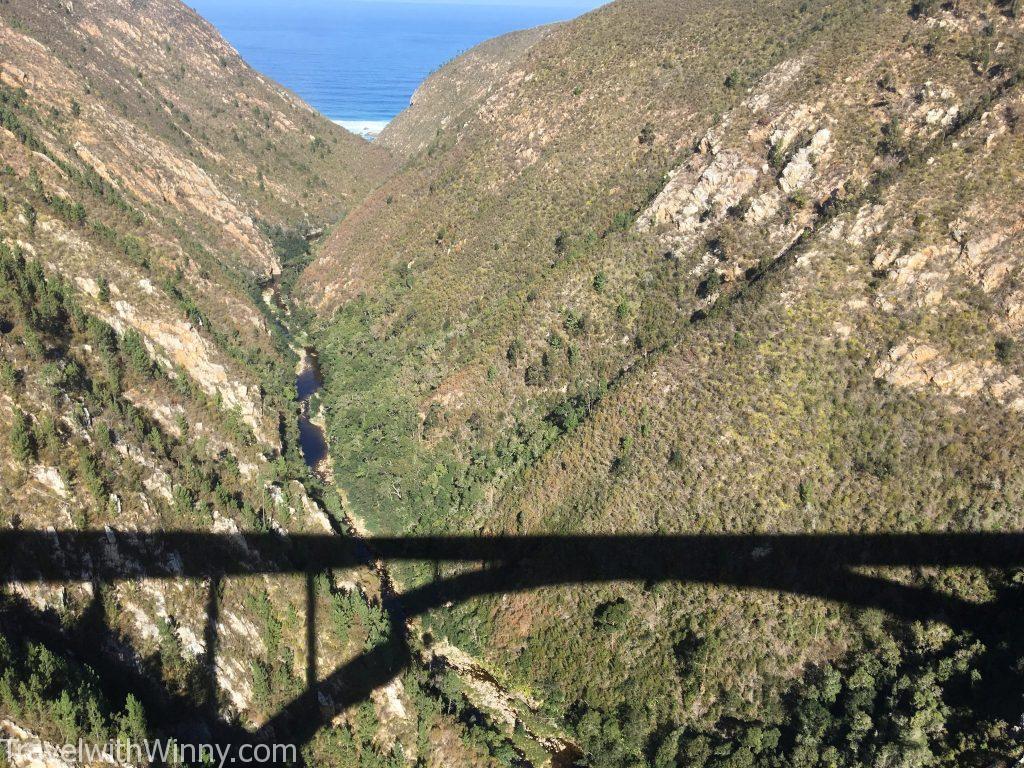 There was a walkway made of metal mesh that leads to the centre of the bridge. We could all see straight through the metal mesh under our feet and it was not a sight for the faint hearted. We could see how high up we were as we walked towards the centre.

From where we were we could see that the bridge spans two mountains and we were sitting in an area like a valley. By the time we reached the middle of the bridge, we were so high up from the ground, a tree at the bottom looks like a dot on the ground. 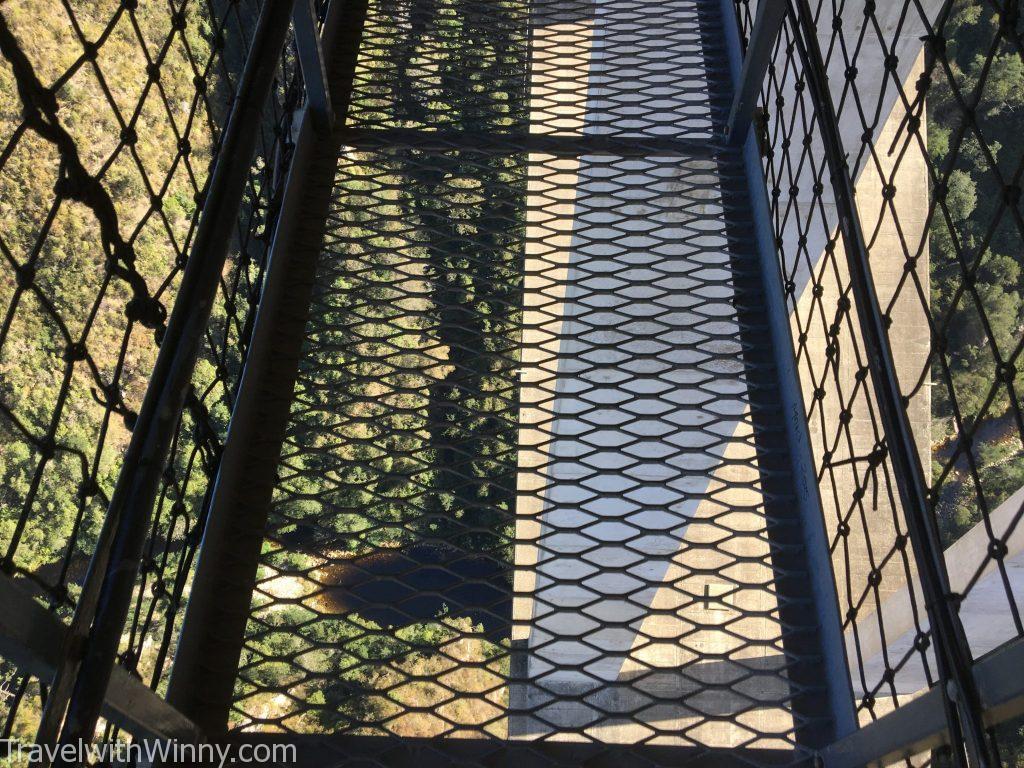 Staring through the mesh pathway was daunting

There were loud techno music playing and all the staff members looks like they were having fun. Even when they pulled the bungee rope up, they did it in sync and look they looked like they were doing a choreography. Soon the first person was called and had her legs tied up.

We all looked at her nervously and anticipated what was going to be happening to us next. We saw her carried to the edge of the bridge, posed for the photo and off she went. My heart sank imagining myself in her position. 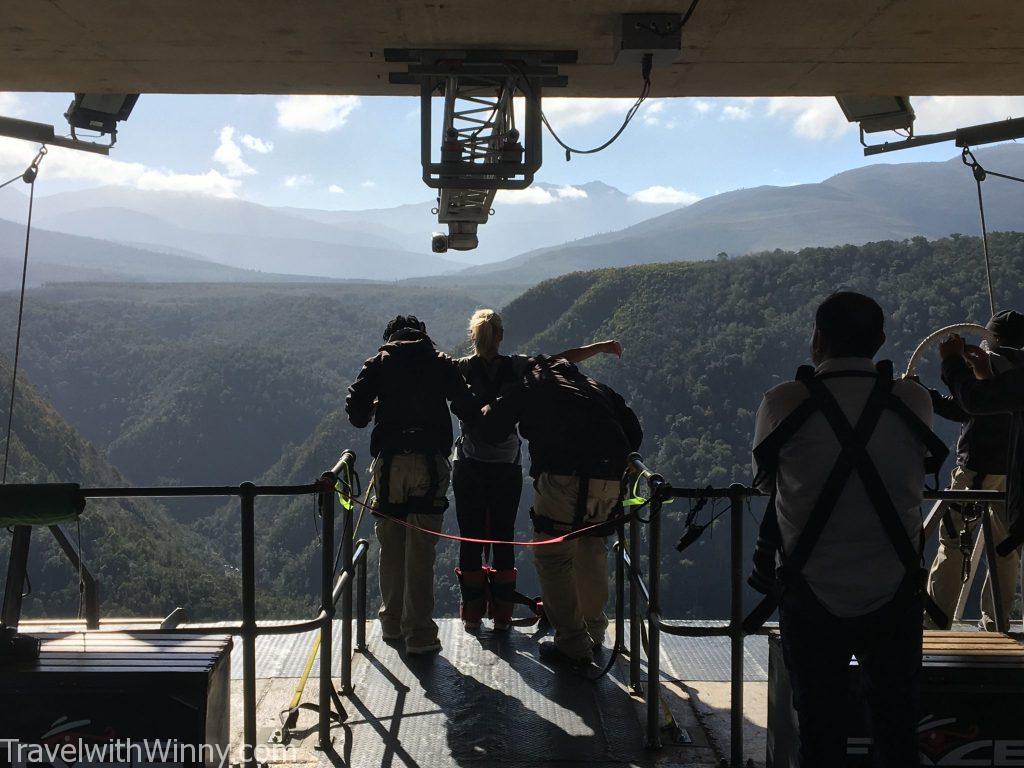 Waiting for my jump was tedious and the wait was nerve wrecking.

There were a two-people sitting on separate seats hanging off metal strings on the other side of the bridge. They were the people responsible to retrieve the jumpers. The first of them were released to retrieve the girl and soon after she came back up cheering. Most of us looked at her with envy that she had completed her jump. She had just completed the highest bungee bridge jump! 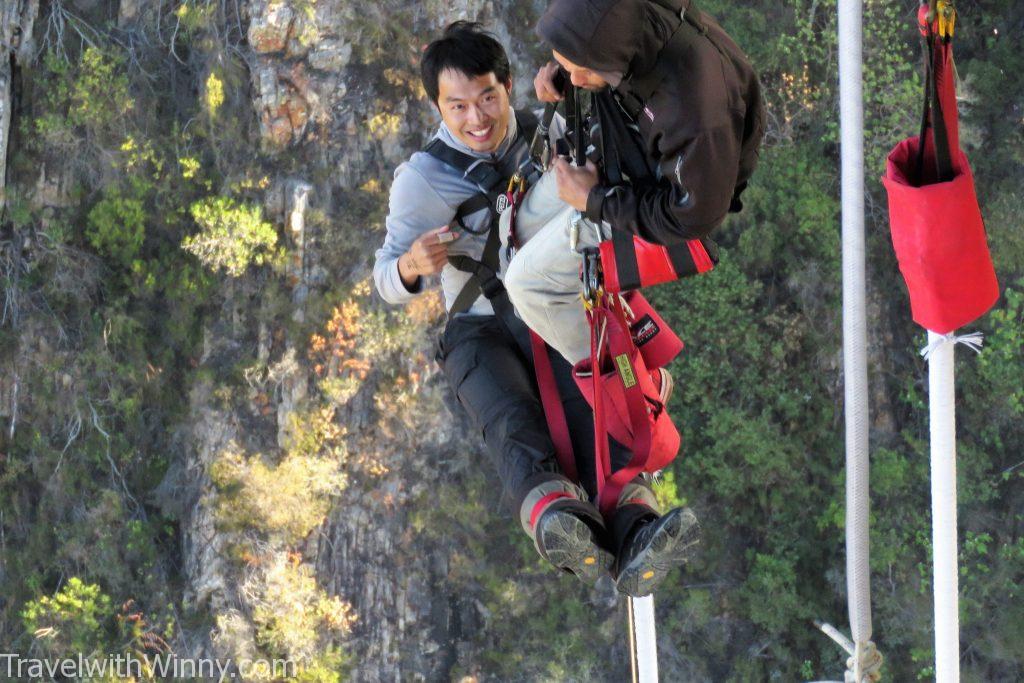 Staff member retrieving me from the jump. What an exciting job to be dangled over 200 meters constantly!

One by one people were called up for their jump and as I waited, the suspense was killing me slowly. It was not the nicest place to wait as well as it was freezing. Cold wind was blowing through the bridge constantly. I waited and waited and soon most people around me have had made their jump.

Finally, just as I thought I was forgotten, my name was called. I handed my phone to a person who had just jumped to take a video of me and that person and his friend began to cheer for me. My legs were tied and slowly, I was brought to my feet and carried to the ledge. I looked out to the open sky and the vast valley before me stretching to the sea and peeked below me to see how high I was above ground. I took a deep breath and leaped off the ledge with my arms open. 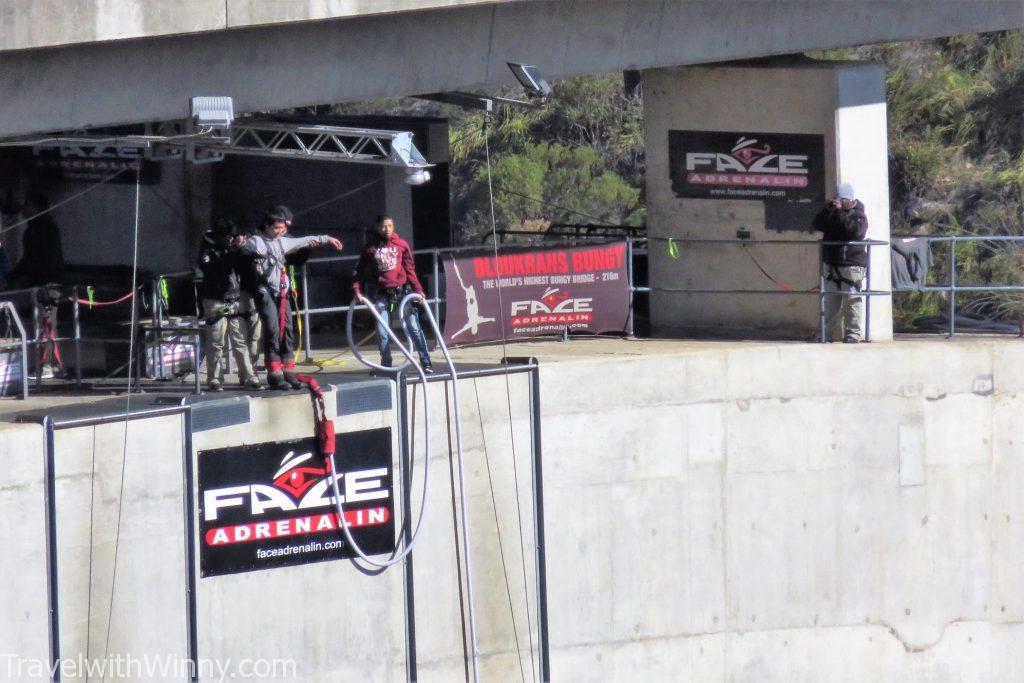 Feels like being taken to the edge of the cliff for execution.

The ground looked like it was flying towards me as I plummeted towards the forest below me. As I was so high off the ground, I felt like I was flying during the free fall. Only when I reached the bottom and the elastic line began to pull me back up, I remembered that I was actually still tied to a rope. 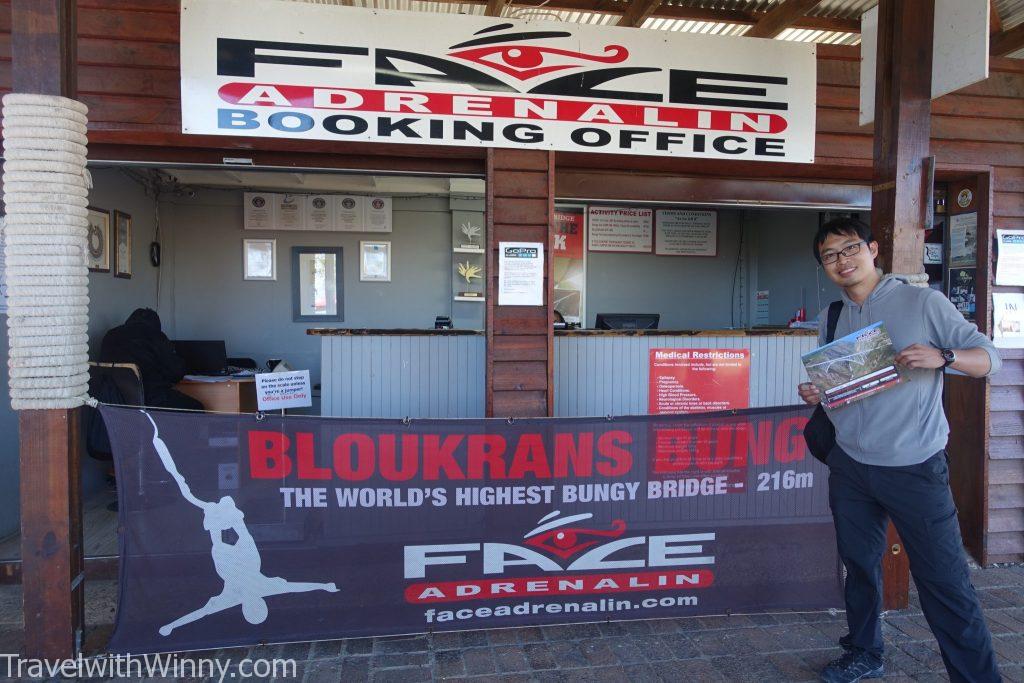 Holding my certificate happily after doing the highest bungee jump in the world.

Hanging there, I waited for one of the retrieving person to tie me up to another rope and pull me back to the safety of the bridge. I had only done bungee jumping twice before in New Zealand and they were only over 100 meter in height. Jumping over 200 meters was definitely a new experience for me and now I have the bragging rights to say that I have done the highest bungee in the world now!