When speaking of Morocco, the first city that people often think about is Casablanca. That is because the film Casablanca (1942) was named after the city, which made the city famous. Even though the majority of the scenes were filmed else where. Casablanca itself is like any metropolitan cities. Large tall buildings, the only real tourist attraction is Hassan II Mosque- one of two mosques in Morocco that is open to non-Muslims. Many travellers suggested to skip Casablanca if time-poor and that was exactly what we did. Today I would like to share with your our favourite city in Morocco- Essaouira. 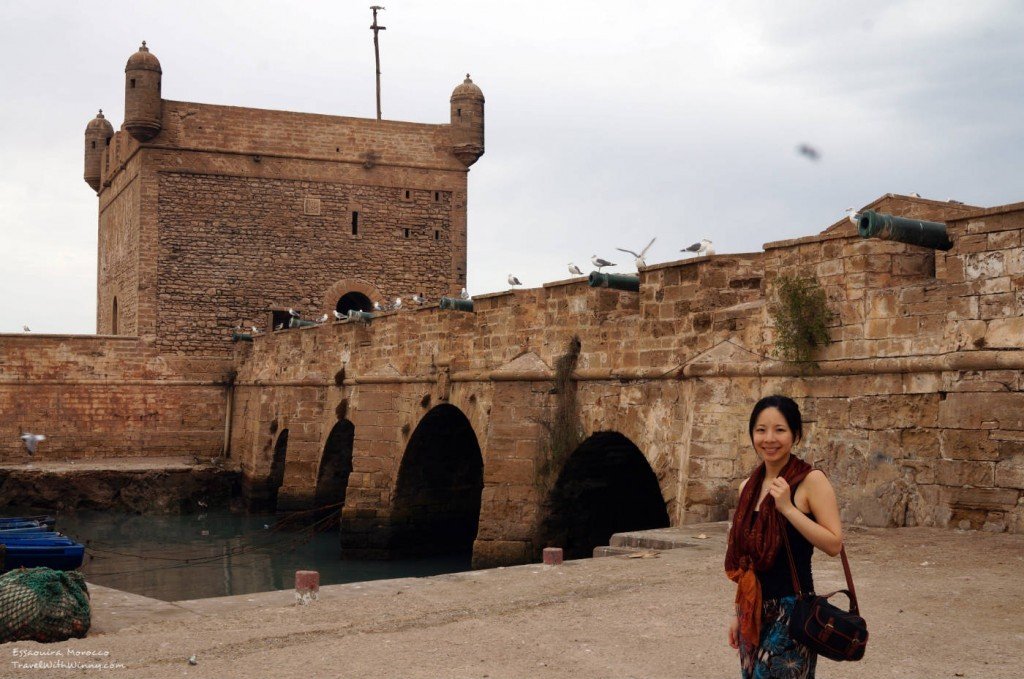 We departed Paris that morning at 6am on Transavia and arrived in Marrakech around 9am. We packed a beginner fly fishing kit as we wanted to try out fishing on this trip. The fishing harbor in Essaouira is popular for fly fishing. 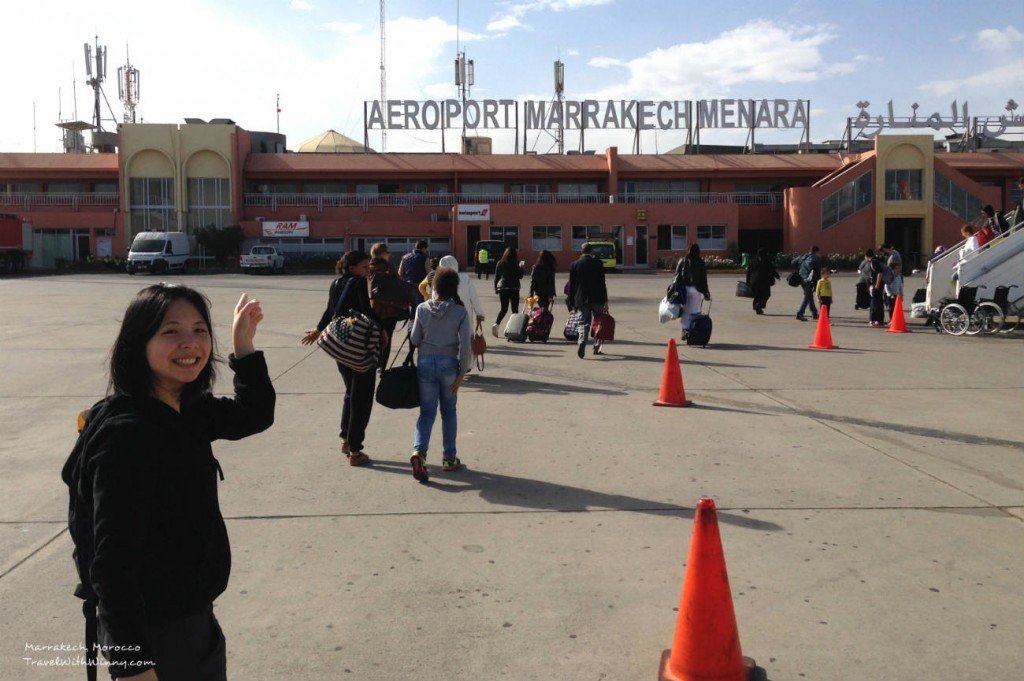 Marrakech airport is very similar to Kathmandu airport. Simple and does its job.

From my research, Marrakech only gets busy at night-time. To prevent us wasting the whole morning, we drove from Marrakech airport straight to the south-west coastal city of Morocco- Essaouira. Eassouira is about 225km away from Marrakech, it takes about 3 hours to get there. If you don’t have a private driver and don’t want to catch public transport, there is a private company available called Essaouira Taxi which costs 129 Euros return. If you do prefer catching a coach, go to Marrakech Tickets and have a look at the price and time it departs 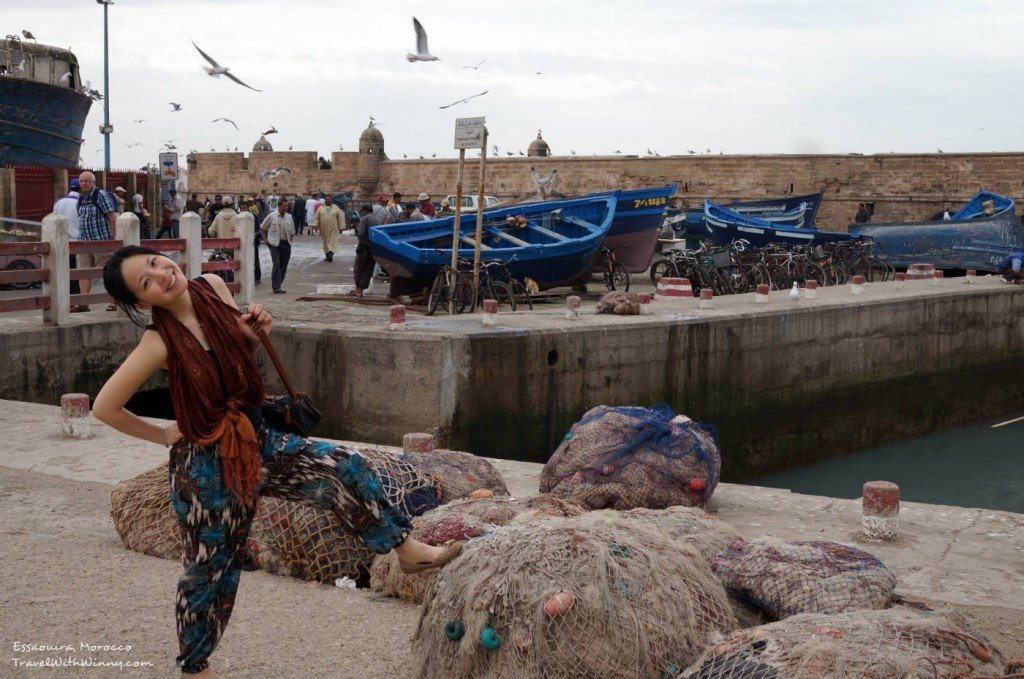 Doesn’t this look like a scene from Pirates of Caribbean? It is a popular port among the pirates back in the days.

Video of Paris Airport to Essaouira

Essaouira became a UNESCO World Heritage listed city in 2001 due to its significance in history and culture. Spain, France, Netherland and England all wanted to take over this place. It is a city surrounded by fortresses, even today you can still see many Dutch cannons in Essaouira built-in 17th century. Essaouira is a popular destination for Morrocans to have their honeymoon, hence you will see many Muslim couples sitting on top of the cannons facing the sea enjoying some romantic moments. 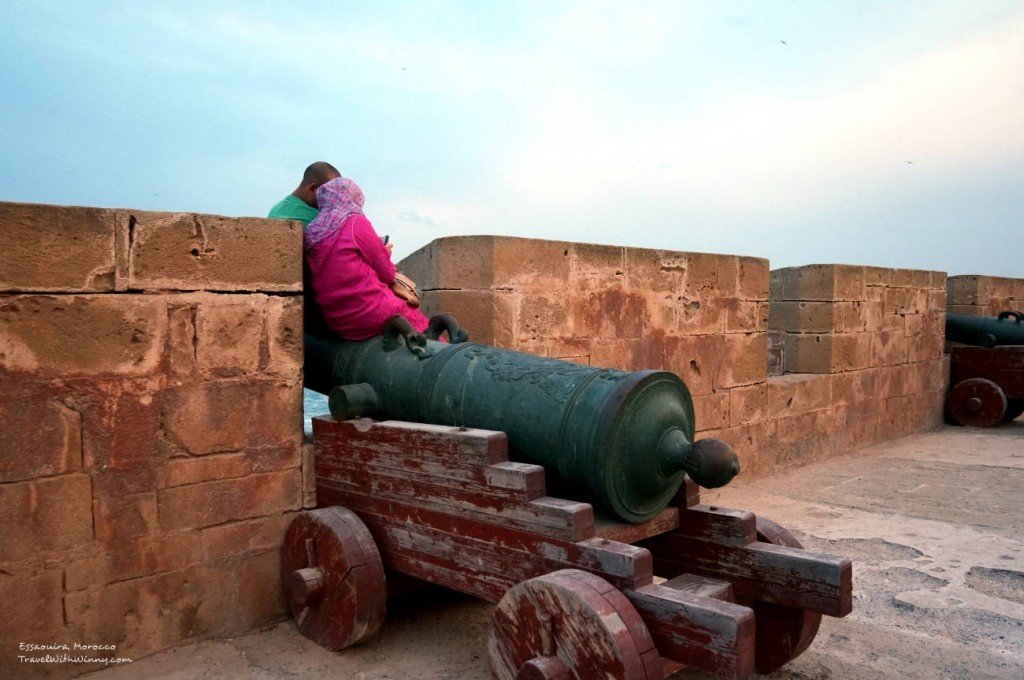 Romance in the air! Although they seemed to be more interested in their phone than the ocean.

Even though the fishing harbour is quite small in Essaouira, there are many sardines, conger eels to catch due to the generation of powerful Canaries Current; all one needs to do is select a powerful tackle from tailoredtackle.com and buy one to get harvesting shoals of fish. The beach is also famous for windsurfing and kite surfing as the powerful trade wind blowing almost non-stop onto the almost waveless bay. There are so camel excursions available on the beach. 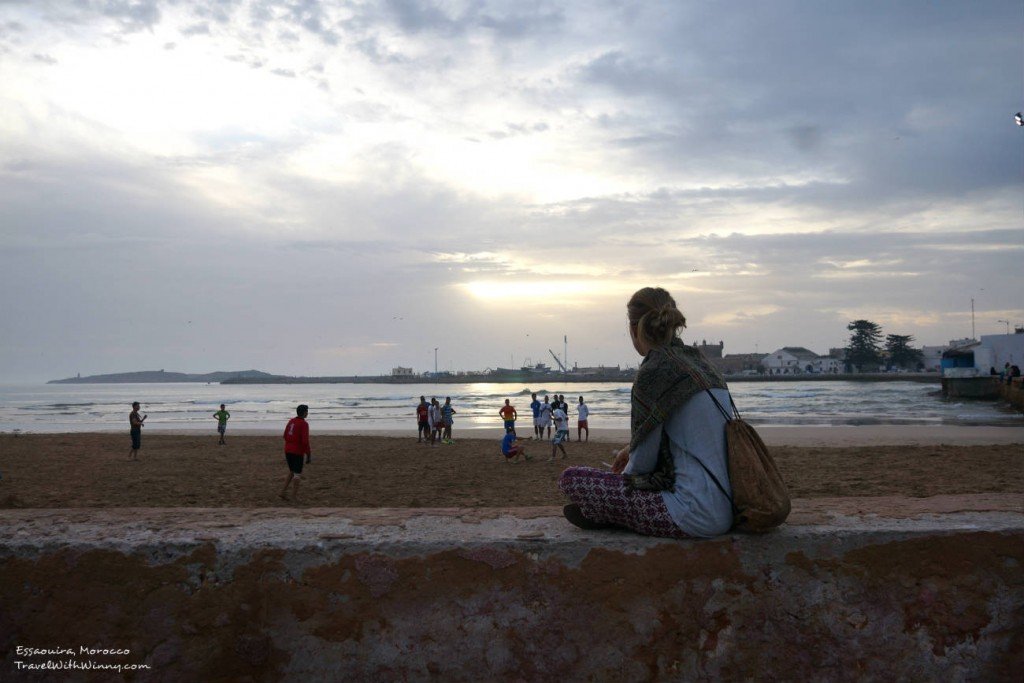 Beautiful sunset at the beach outside the medina.

Right outside the medina there are fish market stalls where you can cook fresh seafood for a small price. The seafood are relatively cheap compare to Australian standards, however they are still quite pricy from local point of view. It is our favourite place to dine in Essaouira, we came here two days in a row. The price of each type of seafood are clearly marked on a large pricing board, usually by weight. 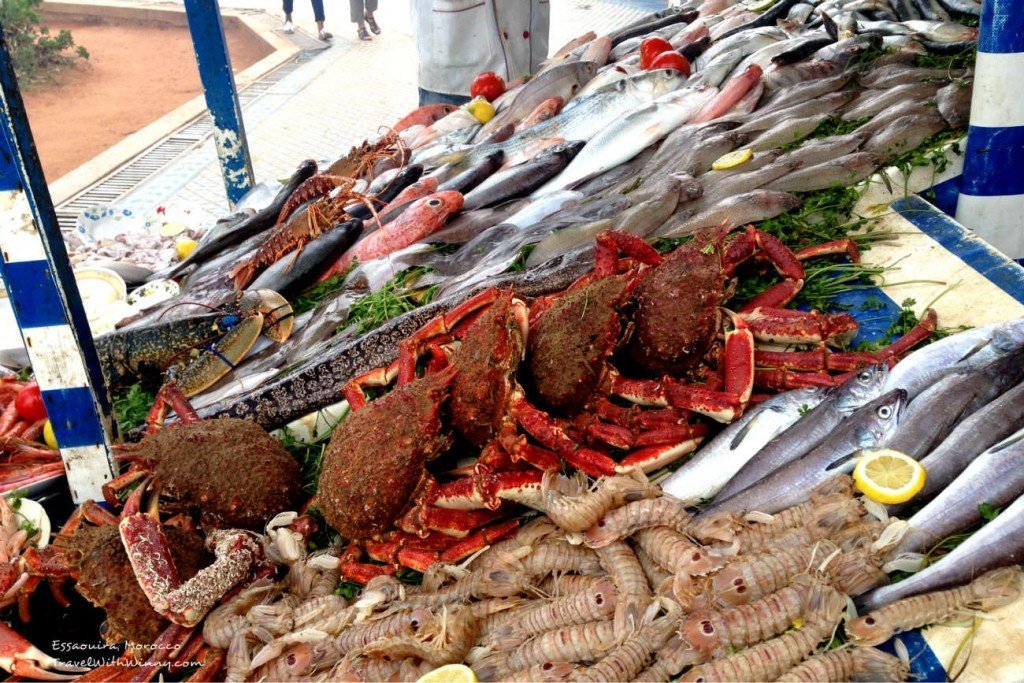 A lot of seafood! A true heaven for seafood lover!

All the stalls pretty much sells the same thing, some have fresher seafood than others. It is important to choose which stall has the freshest seafood and the type of seafood you want. For example, we went to the same stall two days in a row because it has a wider selection of fishes and was the only stall with sea urchins. The prices are “set”, supposedly controlled by the government, however there are still ways to negotiate the prices. 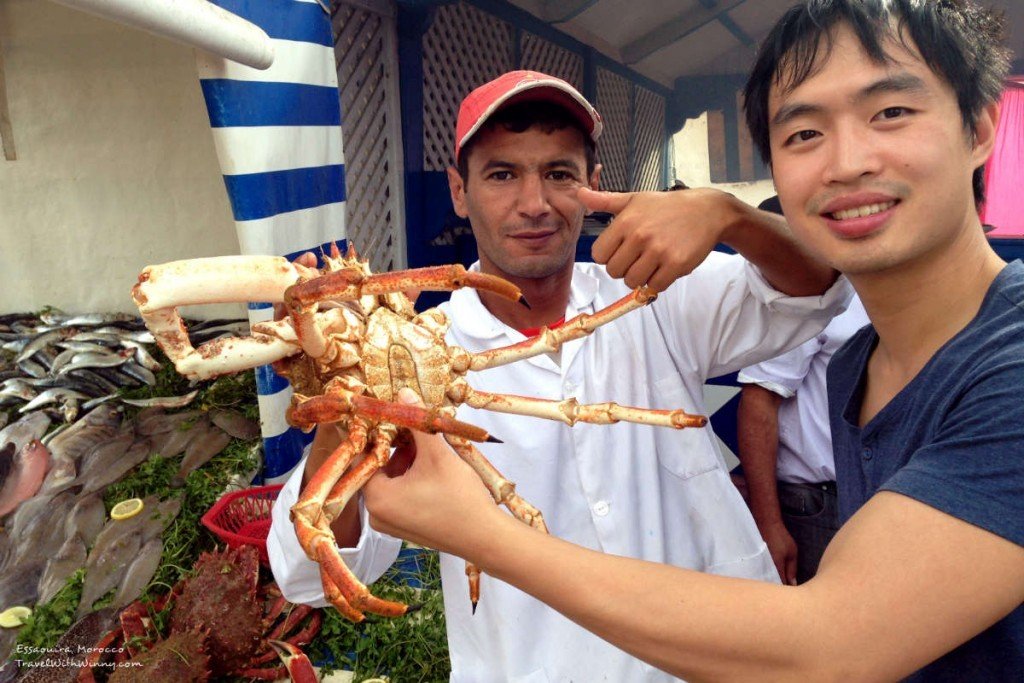 The best way to negotiate the price is to pick something expensive, such as a crab (which costed us around US$15) and ask them to give you some “extra” sardines and shrimps or anything small. Our first day there we got 1 giant crab, 4 fan lobsters and 2 snappers for US$25. It probably wasn’t the cheapest price we could get, however considering we were day 1 in Morocco, we were pretty happy with the price. 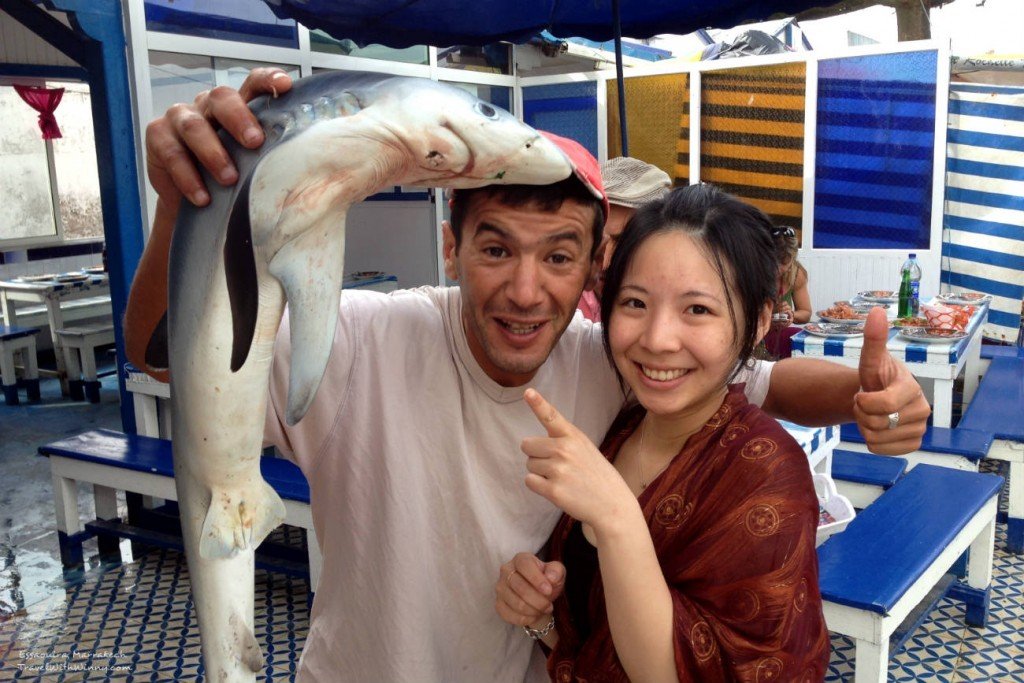 You can even buy baby sharks.

The next day, York got greedy and ordered a gigantic lobster, a the massive crab (like the one from yesterday), 6 sea urchins and some random fishes. It was totally a cholesterol overload meal! It costed around US$55 in total. On Tripadvisor, it strongly advised us to tip 10% on top of the total bill when we dine in a restaurant. Even at a coffee place it is reasonable to tip 2-5DH. The average daily salary of a Moroccan is around 100DH (US$10). We tipped the man 50DH for our meal, he was shaking hands with us, that was when we realized we tipped a bit too much. Just because we ate an expensive meal, doesn’t mean we should’ve tipped this much considering it was a stall. After a few days in Morocco we realized our favourite sandwich with the size of a foot-long subway, only costs 10DH. I understand as a tourist we would be paying tourist prices, however I do not encourage paying the tourist industry a lot more than the locals. Otherwise everyone just work in tourist industries then. 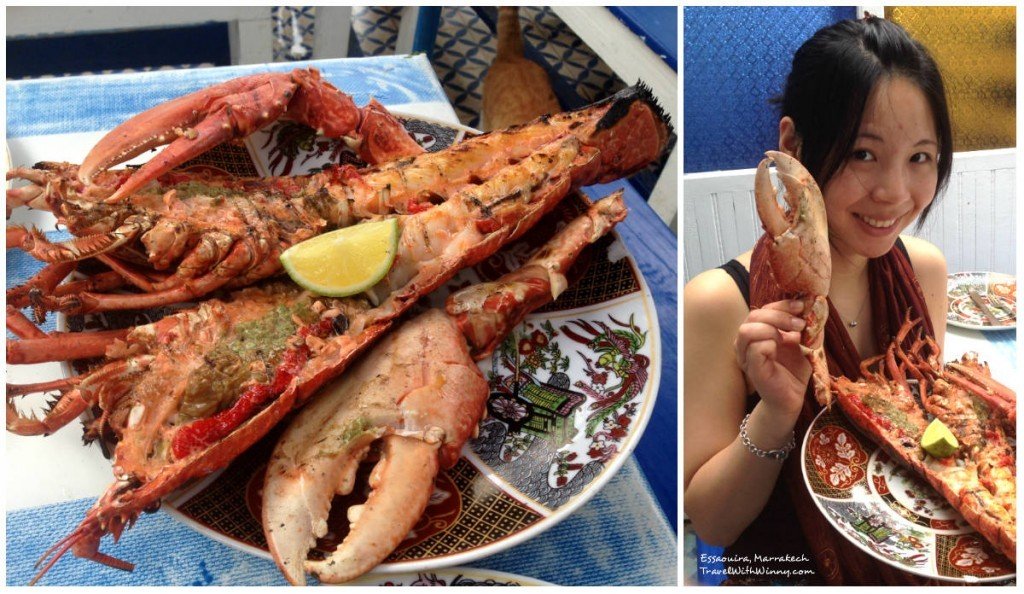 Look at the size of the lobster!

If you ask me about Essaouira, the one thing I would recommend to you is the seafood! The seaport is only 100 meters away from the medina. We were surprised at the level of hygiene in Morocco. Neither of us got food poisoning while we were there despite the fact none of us washed our hands or used hand sanitizer before our meal. Probably because we grew up eating street food in Taiwan. 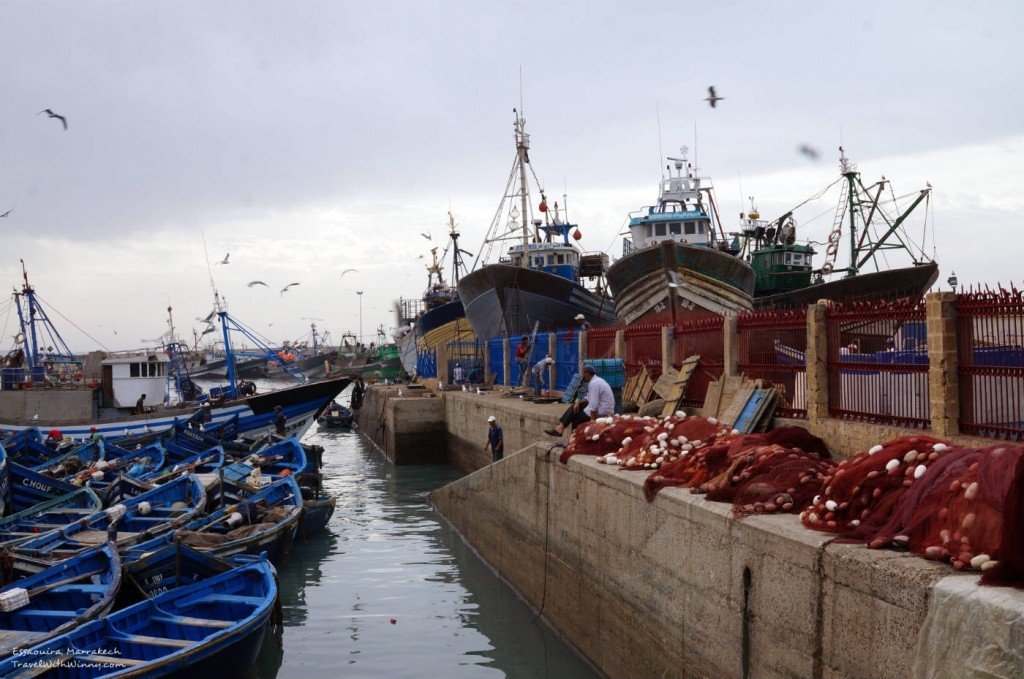 Fishermen goes to the sea before sun even rises.

Another place I would like to recommend is a place called La Soupe. A quiet man serving hot Harira soup for 3DH. We read up about this place on WikiTravel before our arrival, however on our first night we didn’t have the gut to try it. On our second night we saw him again with a few locals drinking the soup on a stool. We thought we might as well give it a try. The Harira soup which is a traditional Moroccan dish with diced meats, lentils and chickpeas. It was delicious. While we were low on the ground, several tourists walked pass with disbelieve, the locals gave us a thumbs up for trying. We were glad that we got out of our comfort zone and mingled with the locals. Although I must admit we went to Morocco during Ebola epidemic, even though Morocco didn’t have Ebola, we were still a bit concerned about the way dishes were washed. Luckily we survived. 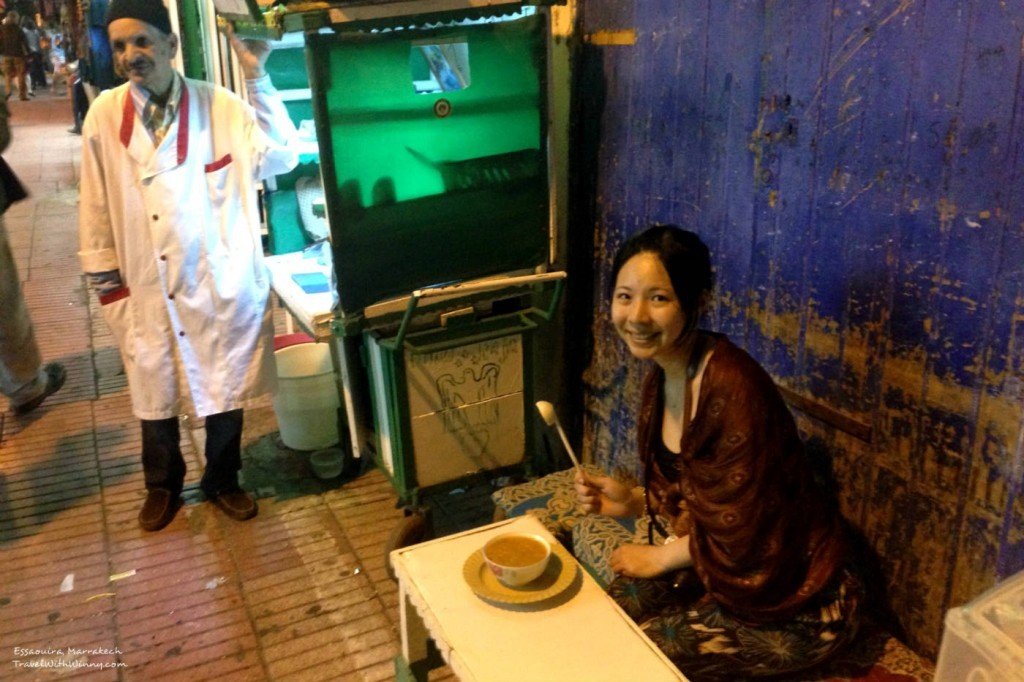 The medina in Essaouira is very small, it is hard to get lost. After several rounds, we pretty much knew the place inside out. Most people in the medina are either tourists or work in tourist related industries. Outside the medina, it became more modern. Similar to what you see in India with many made in China products. 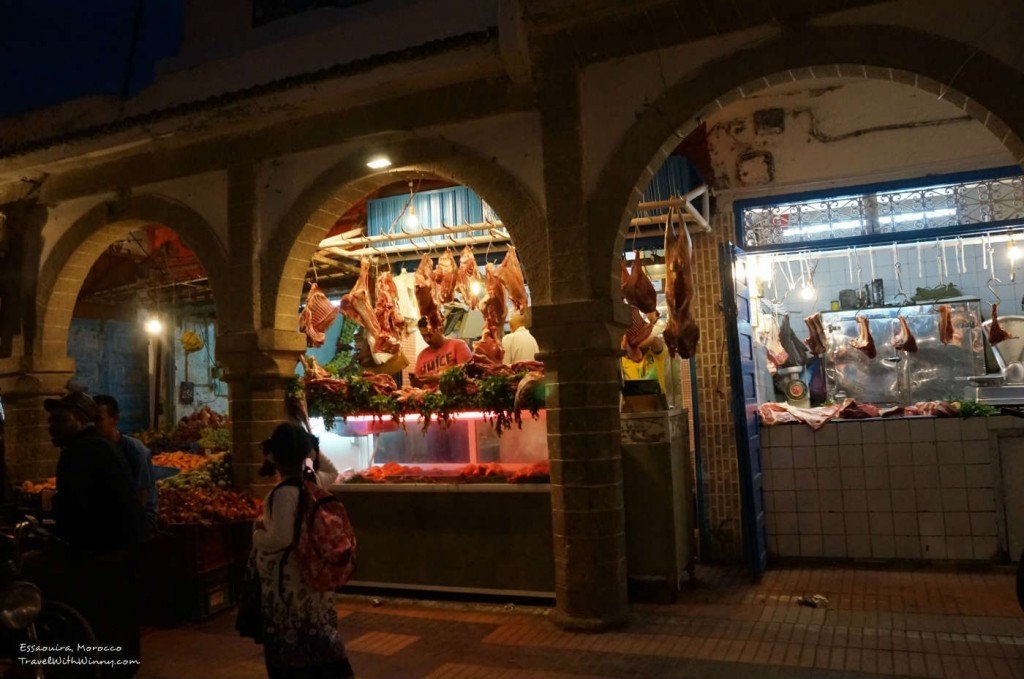 You see the shoes on the left hand side? It l.

In total we stayed in Essaouira for 2 nights, we left on the third morning and headed back to Marrakech. There were many argon trees on the way. Argon trees are quite unique to Morocco, the argon oils are famous for its cosmetic, culinary properties. Apparently it has medical properties too, however I rather use these oils for my hair. I think any more than two days in Essaouira would be too much (unless you are there to relax). In my next article I will be telling you about all the weird food we hit up in Marrakech, including sheep face and brains 🙂 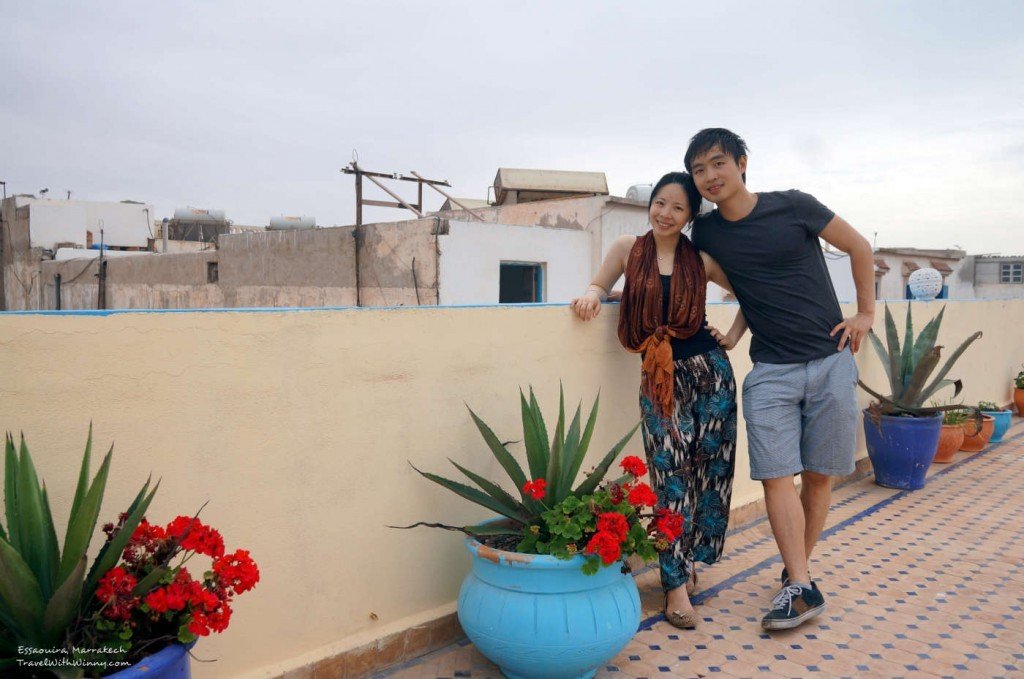 On the rooftop of our riad.