Winny have always wanted to go to the Grampians National park since she has been in Australia to see the beautiful scenaries, crazy rocks, amazing wildlife and famous aboriginal paintings. After four years in Australia, I finally have the chance to take her to visit this place during our travels from Adelaide to Melbourne. Grampians is roughly 500kms from Adelaide (5.5hours of driving) we woke up very early that day and made Grampians our first destination in order to save time for the Dolly parton family theme park! 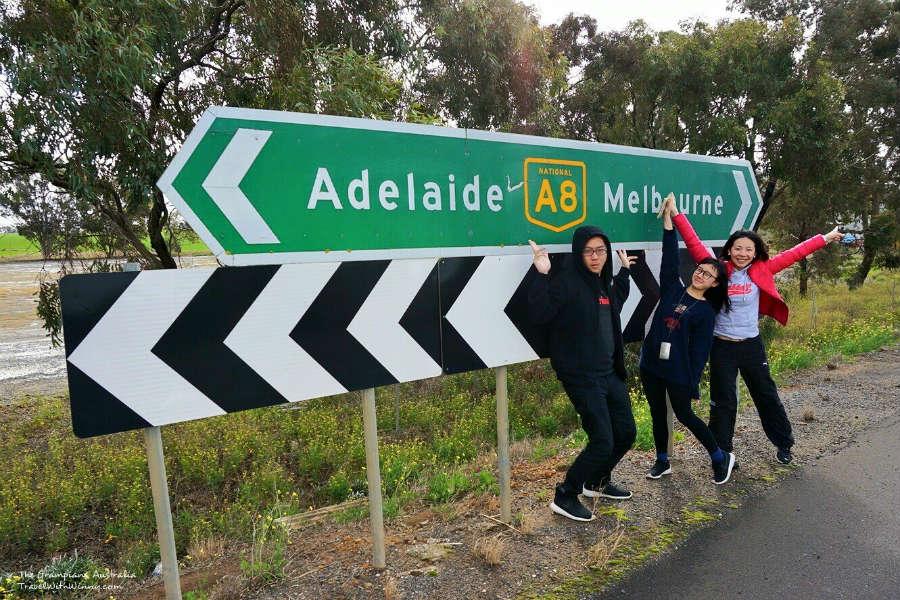 We have finally left South Australia and crossed into Victoria!

Winny have always thought that between South Australia and Victoria, there would have a sign dividing the boarder like the ones dividing Northern Territory and South Australia (Read: Crossing Over to Northern Territory) , but there isn’t. Besides time going faster by half an hour on our phone, there isn’t really a huge highlight crossing the boarder. We first had a rest in the biggest town close to the Grampians called Horsham, got some information from the information center and we head on into the mountains. 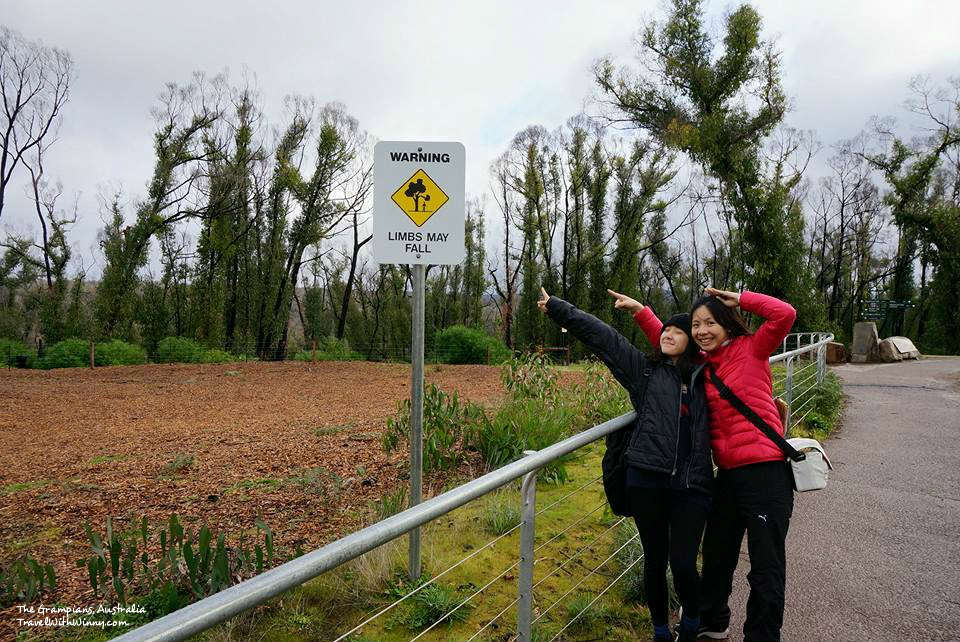 Australian bush fire is very scary, burns all the trees around the footpaths and as a result we have to be careful of falling branches.

Grampians National Park has many trails with different difficulties and scenaries. Australians especially love to visit here during the weekend for a three day tour for these trails and enjoy the environment. Unfortunately, it was raining heavily through out our time here with rough winds. Duo to the weather. we had to cancel any plans for any long walks and become a typical tourist and drive to the main attraction for photos and quickly run back to our cars. >.<

Our first stop is at Mackenzie falls. The distance to Horsham from here is roughly 56 km (50 minutes). It was very wet that day and the mountain roads are very curvy so we had to drive very slow to be extra careful. Mackenzie falls is the biggest waterfall in Victoria. There is a small track of roughly one kilometers that leads towards this waterfall and down some steep stone steps. The waterfall was definitely worth the walk. The scenery all around waterfall was all quite amazing. 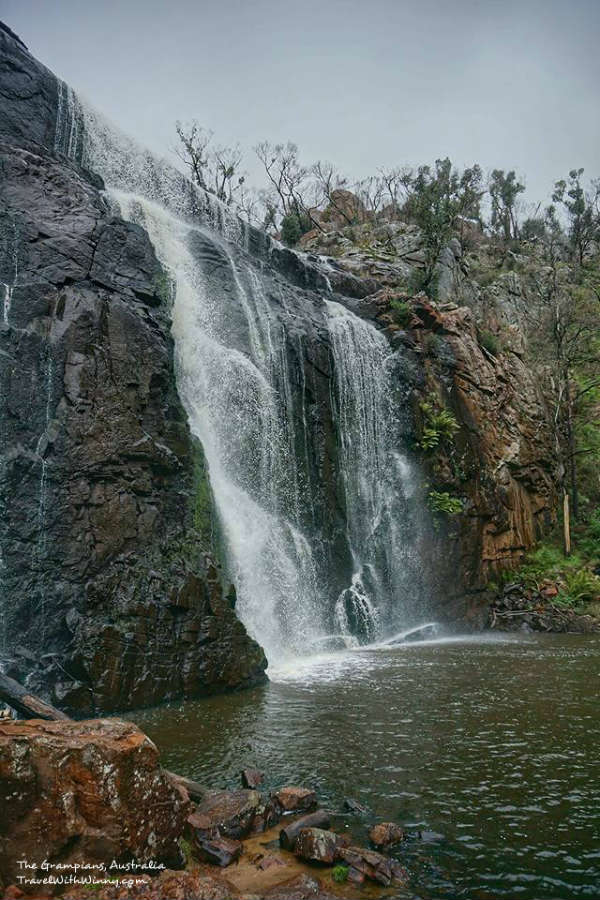 You can view the whole view of the top half of the waterfall from the top before climbing down the rock made stairs to the bottom. The waterfall is pretty from both angles. you can actually continue this walk for another 7 km for a walk called the Makenzie river walk. However it started raining again and we were in no mood to continue this walk so we quickly walked back to our cars. Hopefully we would have a chance to walk the whole walk some day.

The next scenic location to visit is the very famous “The Balconies”. The entrance to “The Balconies” begins at a place called the Reed Lookout. This place is roughly 6.6 km away fro MacKenzie Falls. The Reed Lookout offers a 180 Degree overlook of the Grampians National Park. It was extremely windy that day. We almost got blown away standing on the stone next to the look out. The scenery was quite stunning and we all stood there fighting the gushing wind to marvel over the scene for a while. 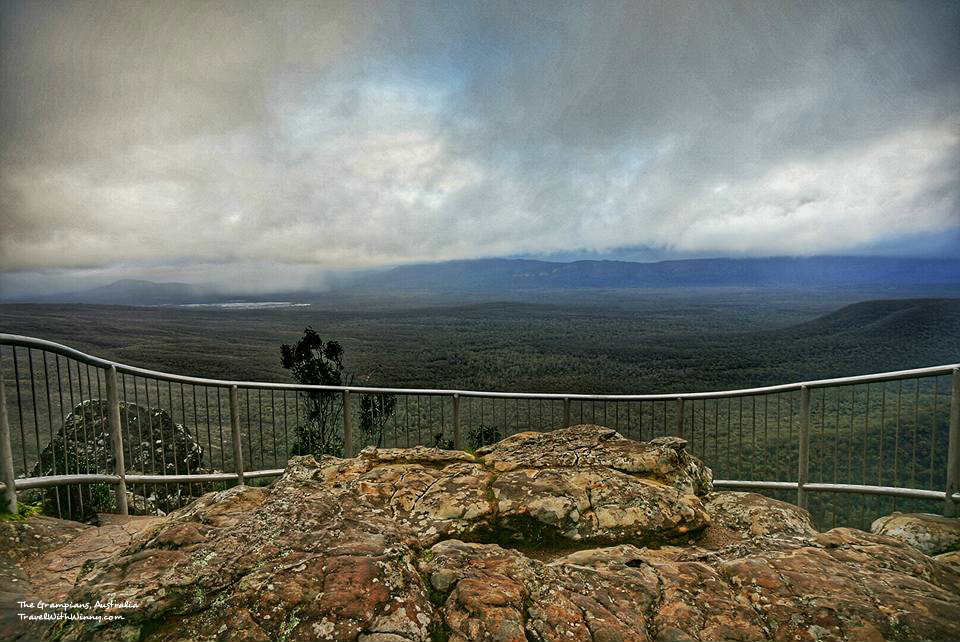 The car park look out that oversee the Grampians National Park.

There is actually another more famous lookout called Boroka Lookout, however due to the lack of time we didn’t make it to the lookout. At the Boroka Lookout, you could see the whole canyon and Lake Bellfield. We probably wouldn’t be able to see too much that day anyway because the weather was terrible. 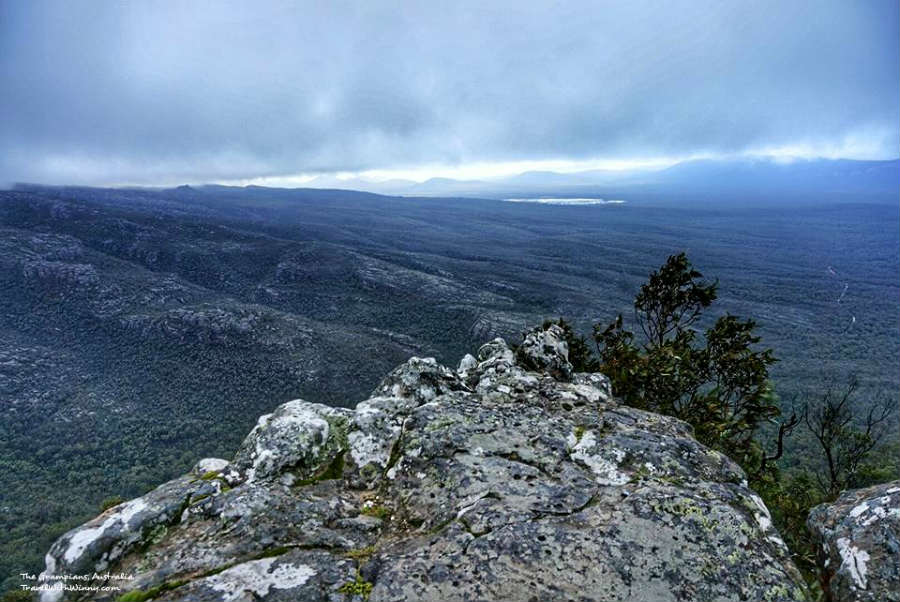 Although the weather was terrible, the scenery was still very pretty.

We walked for about one kilo-meter before we arrive at the famous big rock called “The Balconies”. The Rocks literally stick out like a balcony over the steep cliffs. People used to be able to walk out to the edge of both balcony for a photo, however the whole area is now fenced off due to safety reasons. I could imagine that the photos would be spectacular though, standing on top of those balconies. Might look like something out of the first scene in lion king over looking over your kingdom. Now we can only be satisfied by just admiring at them from a distance. 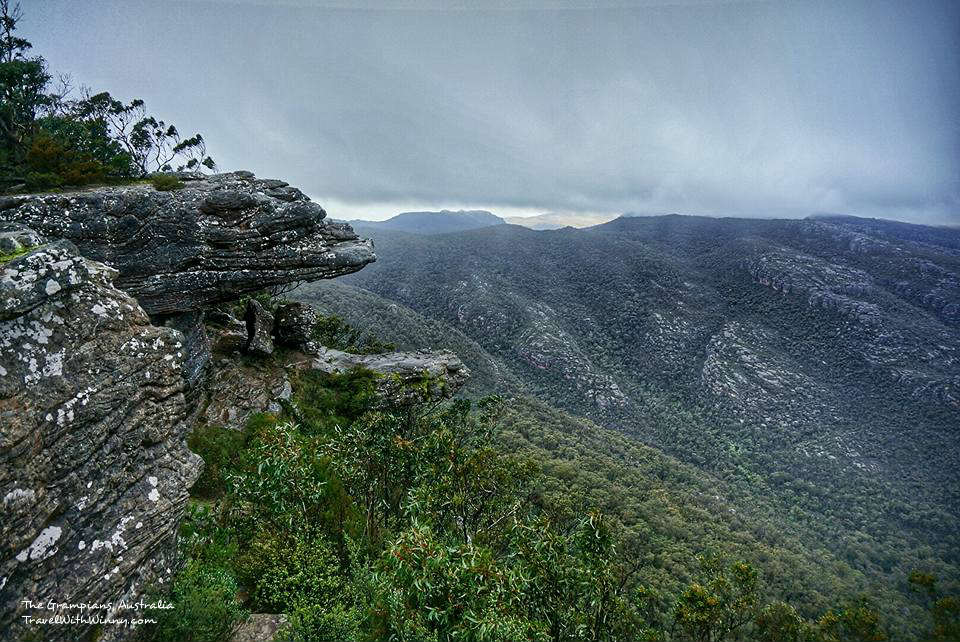 The Balconies. Could climb on these in the past. How I wish I could be here a few years earlier!

What bothers me is that many tourism places still use people standing on those balconies to promote the Grampians. Winny only wanted to come to this destination because of those photos. On our slightly disappointing walk back to the car park, we found a rocky patch where we could pretend to pose on a high balcony  rock and pretend that we are high off the ground. If we get the angle right we can still catch that feeling of high ground.  We played around a little and took many photos there. 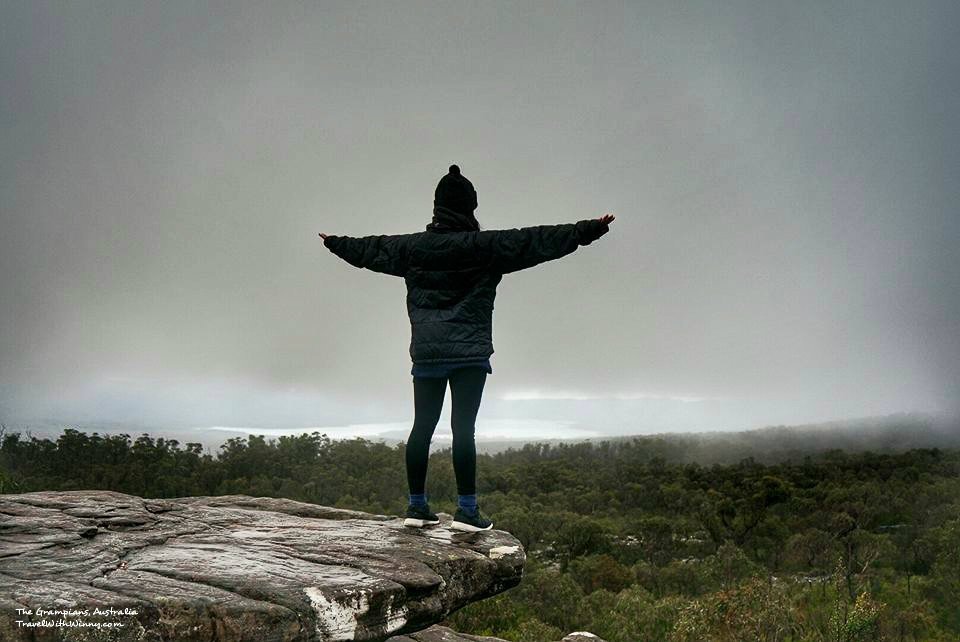 Just need to get the angle right, we could still get the feel of a balcony. 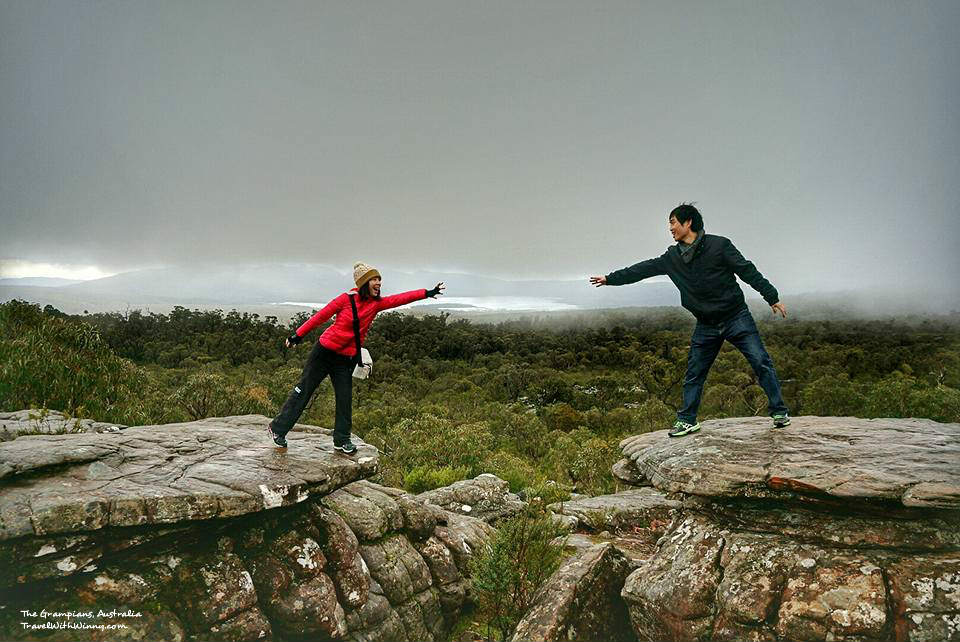 The high ground pose… unfortunately you might be able to see that we are not that high off the ground.

That night we stayed at a place called Halls Gap Motel. It’s located at the gap between the two hills in the National Park. There are not many restaurants in the town though and most of them were closed by the time we arrived at 4pm on a Sunday evening. Luckily we prepared some food, otherwise we will have to drive for one hour to Horsham for fast food.

On the second day we drive down from Halls Gap and head towards the Great Ocean Road. We were only twenty minutes on the road before my cousin saw a lake that she really liked the look of. I then found a road that leads towards the lake and through a sea of dead trees. The lake isn’t actually a significant site and hence no signage to say where we were. From my GPS I believe this place is called Lake Bellford. 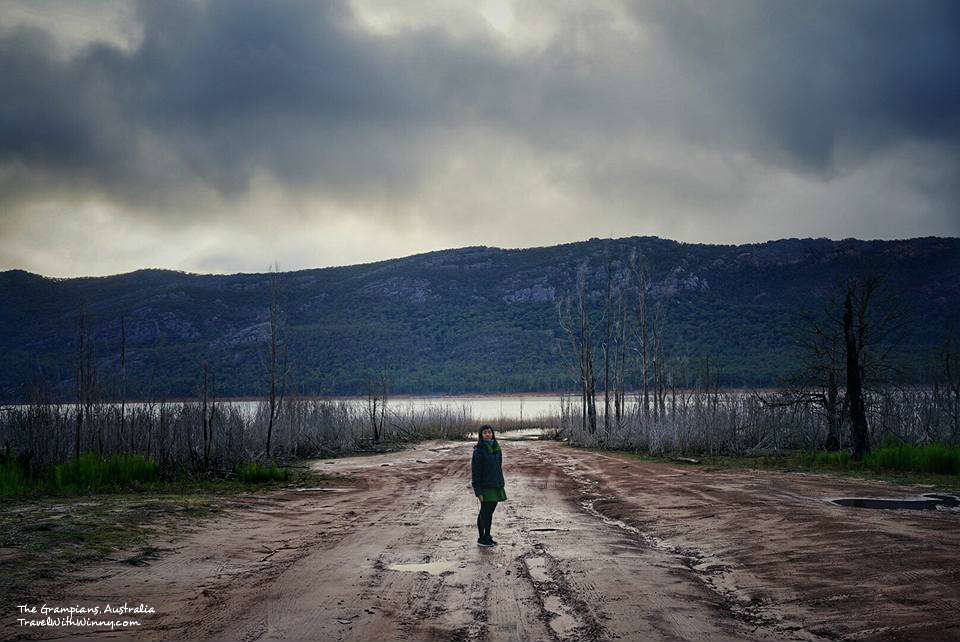 The place is filled with mud and so I parked a little further and we walked towards the lake. At the end of the mud road is a place where people can disembark their boats or kayaks from their trailers. Check these kayak carriers, they seem like they’d be perfect for getting through these muddy conditions.  Since it’s so early (9am) no one was around and the place was very peaceful. The place has quite a different feel and looks quite artistic on the photos. 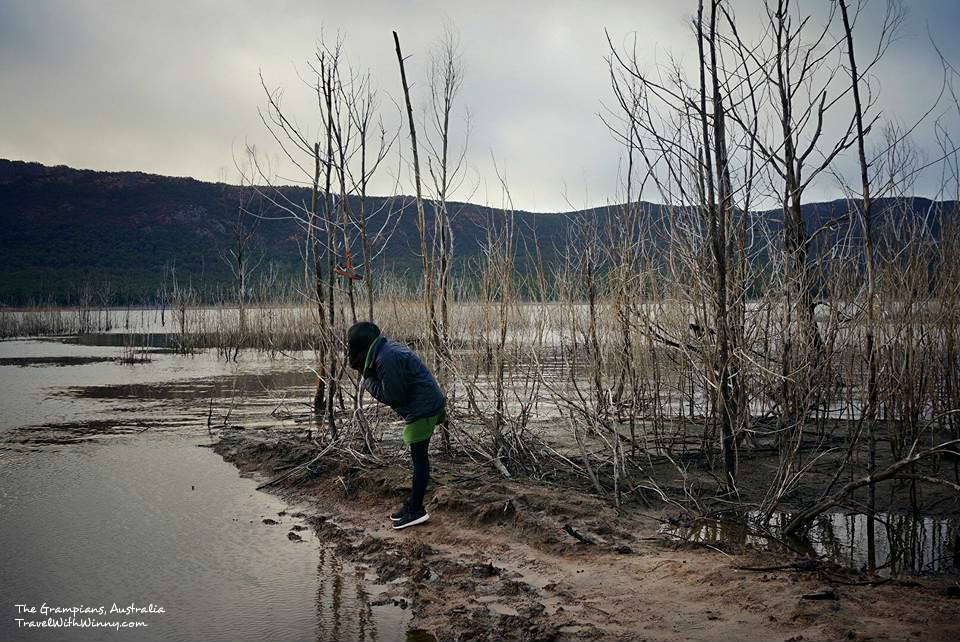 Although we are not too sure what kind of lake this is but we really liked the view.

As we are in the middle of the Grampians National Park, we soon realized that we were surrounded by kangaroos. We spotted a few of them sprinting in a distance and there were quite a few of them around us. It looked like we were on the African Plain and wild life were running freely around us. As we were not used to Australian Outback, we were quite marvelled over such a scenery. I think I will choose to staying here a little longer if the weather was better and not as cold. 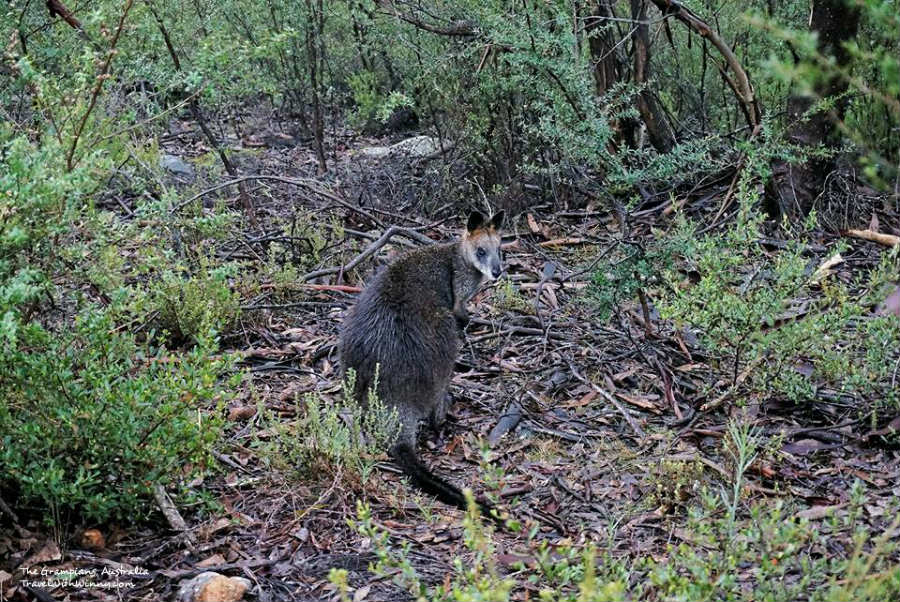 PS. You can go on Grampians National Park‘s official website for any further information

You would be able to see my travel updates! Thank you for your support!