We packed up everything and left the place at around 12.50pm. Leith said for the next 250km, there will be no petrol station, no shades; it will be a boring 1.5hr drive. He shared a random “true story” tip with us on how to sleep in a car during cold winter or hot summer night. Apparently you just need to change the gear to neutral, and turn the air conditioner on for the whole night; it will only use up 0.5L of oil. The car rental companies won’t tell you this (and I found this bit on Rent-Vehicles.co.uk); it may sound bad the engine is on, but seriously doesn’t harm the car too much. Worth a try if you want to save some money from hostels. 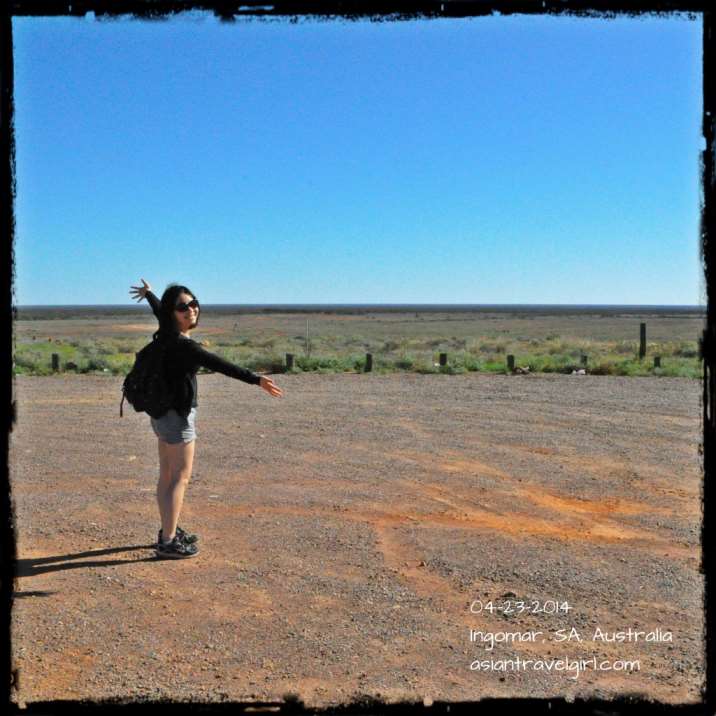 Crazy Australian Outback with nothing in sight

At 2.40pm, we reached a mini-stop with 1 shade. There were no toilets facilities, can only do bush toilets if you really need to. Since only another 55 minutes till Coober Pedy, I might as well hold it in. It’s kind of scary thinking that we already started driving at 6.30am and still haven’t reached our destination. No wonder if you bury someone in the outback, you can never find them. 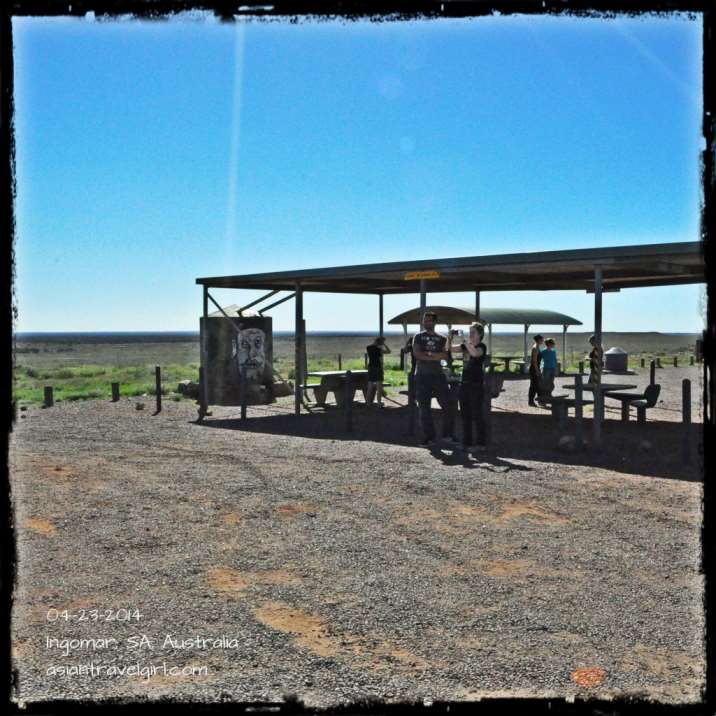 The only shelter after 250 km drive. Bush toilet only.

We finally arrived in Coober Pedy at 3.50pm. Such a shame we only spending such a short time here, no wonder my patient said we can only see what the tour people want us to see if we only spending a night in this place. 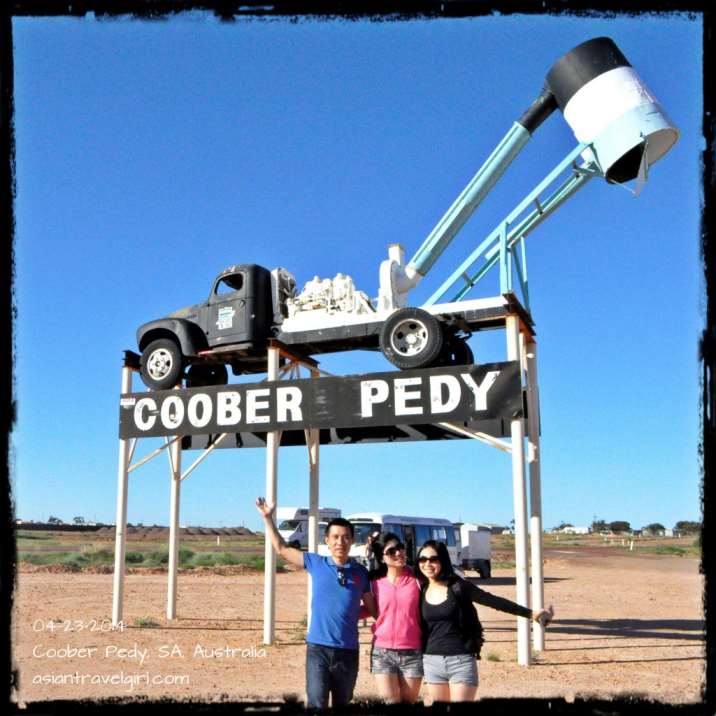 After 600 km drive we have finally arrived in Coober Pedy!

A lot of movies used to be filmed here, especially ones related to Mars (?) and space expeditions. Obviously all these movies were old and I haven’t seen any single one of them. Only remembered Vin Diesel was here for one of the film “Pitch Black” back in 2000. 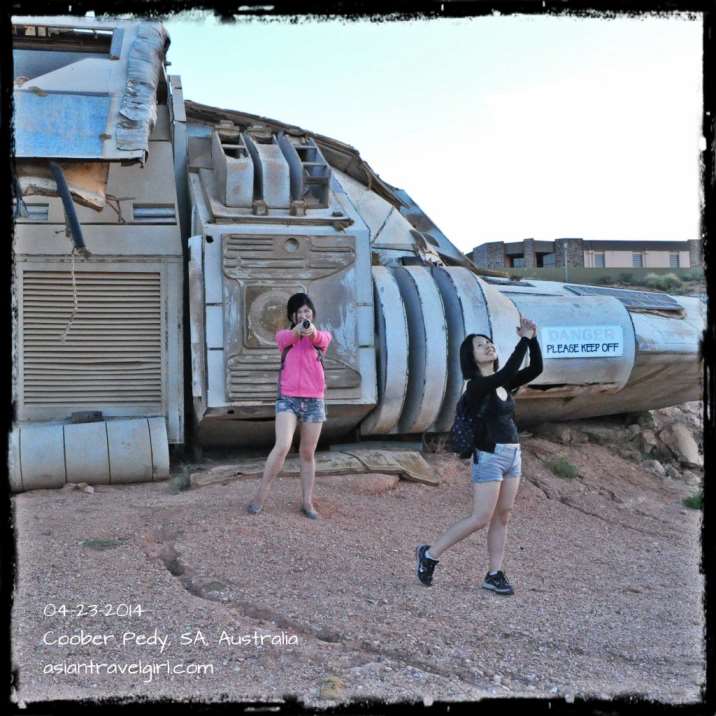 Some left over from some movie set

Coober Pedy has a population of 1695 according to 2011 census from Wikipedia. It is 846km north of Adelaide on the Stuart Highway. Not only it is famous for the amount of precious opals mined here, it is also famous for underground residences called “dugouts”. It helps to avoid the heat during the day and keeps the house warm at night. As is palpable, the heat there is a major concern, which is antipodal to the weather back home at any normal home; on the contrary taking the help of professionals like KCS Heating for maintaining the room temperature.The name of this town is actually from the Aboriginal word “kupa-piti” which means “white man’s holes”.

Leith said the underground houses used to cost only AUD$20,000, now probably need AUD$200,000 (haven’t checked the real estate website about the accuracy of this information). The big sign when we first arrived in Coober Pedy is very cool, however we did not get many Facebook “likes” on that photo, I guess people don’t know where we are. There are about 70 opal fields in Coober Pedy, many opal mines are blocked off since people sometimes will fall into them. Nowadays people don’t make money from mining, they make money from tourism. For those who still mine, mostly it is just hobby.

You start getting many Aboriginals in Coober Pedy’s city center; many of them are drunk during the day, need to be careful.   The hostel we stayed is an underground hostel, just like all the other hotels and motels around the area. I guess it is one of the things they are famous for. First thing I do when I arrive at a new place, is to run for the plug so I can charge my phone. It is important for me to type down what happens on Evernote, so blogging can be easier when I go back to civilization. 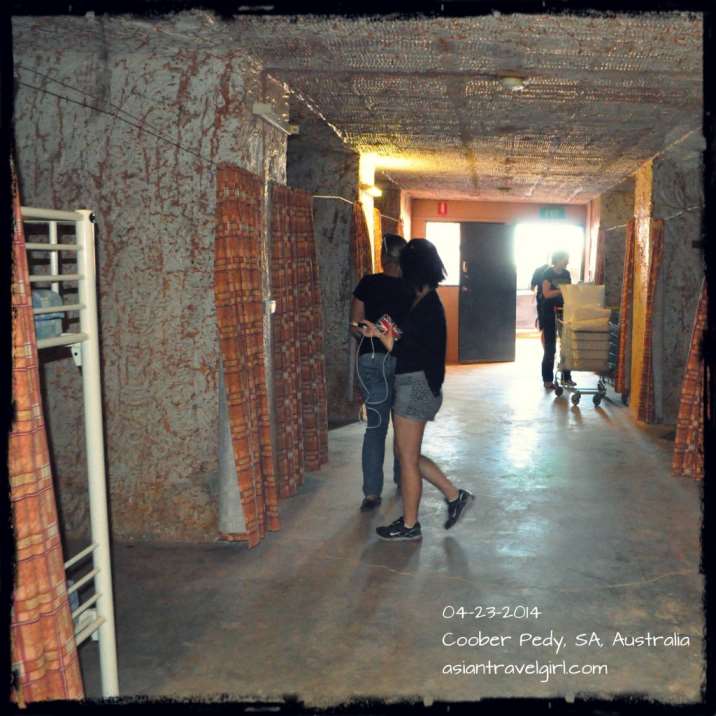 Right next to the hostel, there is an opal museum selling opals. Laura’s manager said it is actually more expensive to buy opals in Coober Pedy compare to other places (don’t quote me on this). 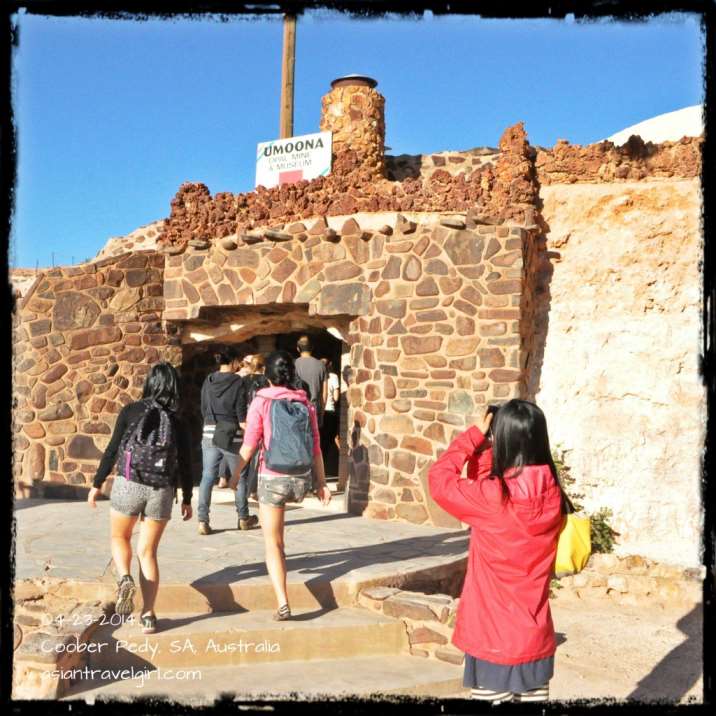 Umoona Opal Mine and Museum

The tour started by showing us a video of opal history. At that time, most of the opals were mined in Hungary. The opals in Coober Pedy were discovered in 1915. People weren’t that keen on buying Australian opals, they had to market the opals for 2 years in United States before it became popular. 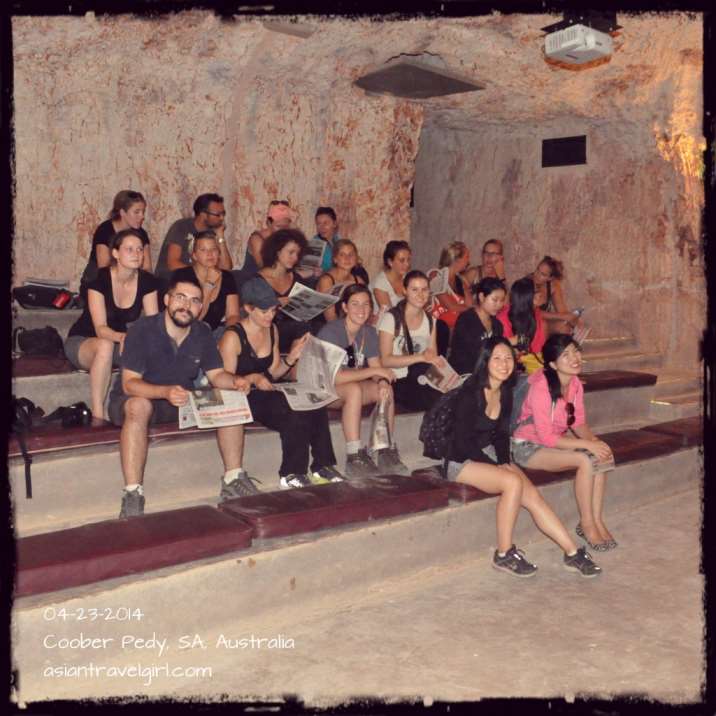 The tour lady said most of the opals found do not have much value. The colors are what determine the value of an opal. A black opal values 20 times more than a white opal. The success of mining opals all comes down to luck. It is not possible to analyze the soil to determine the existence of opals (unlike other precious metals), therefore no companies will invest the money in opal mining since it is too risky. Many people who are still doing opal mining are all private or partnership to share costs and for safety reasons. This is because the basic machine to do opal mining is around AUD$50,000 and you only make money once the opal is sold. Consequently, sometimes you can make hundreds of thousands in one year, sometimes you don’t. 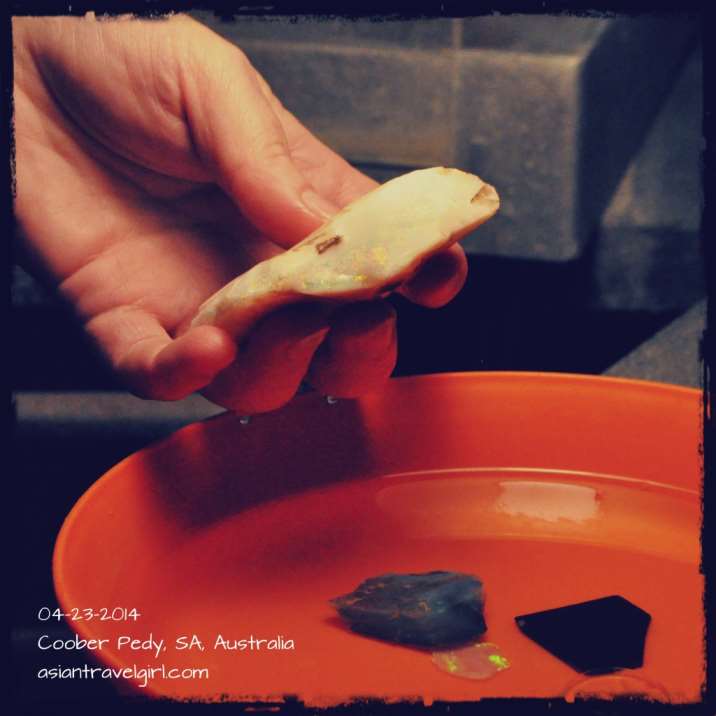 Showing us the black and white opals

Around 60-70% of residents of Coober Pedy lives underground. The temperature all year round is about 21-25 degree Celsius inside the dugouts. The outside temperature during summer can sometimes go up to 50 degree Celsius and 0 degree Celsius in winter. Therefore the dugouts are nice and comfortable to live in. However due to minimal windows, the residences will need to pump oxygen into the dugouts to prevent carbon dioxide overdose. The bathrooms will usually be in front of the house, to minimize the amount of plumbing (talk to Whitton Plumbing) needed. 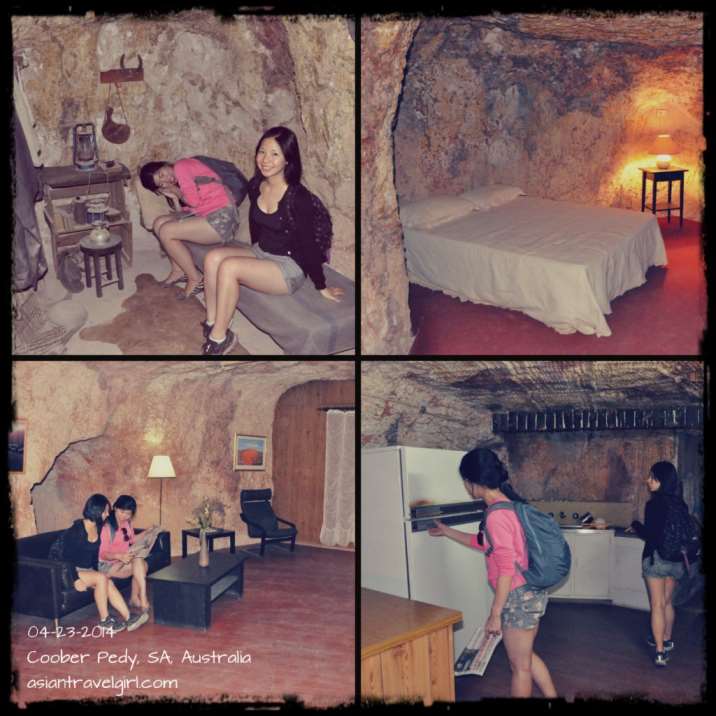 Living underground can be pretty luxurious too!

Since the rooms are “dugouts”, a new room takes about few hours to make, however the mess it makes require months of cleaning. Council approvals are required for any changes to the “dugouts”, each “dugouts” needs to be at least 4m away from each other, or else it will be quite dangerous to dig into your neighbor’s house. There used to be a lot of active opal mines in Coober Pedy, however due to the increased residency, it is now forbidden, people can only mine outside the town center. 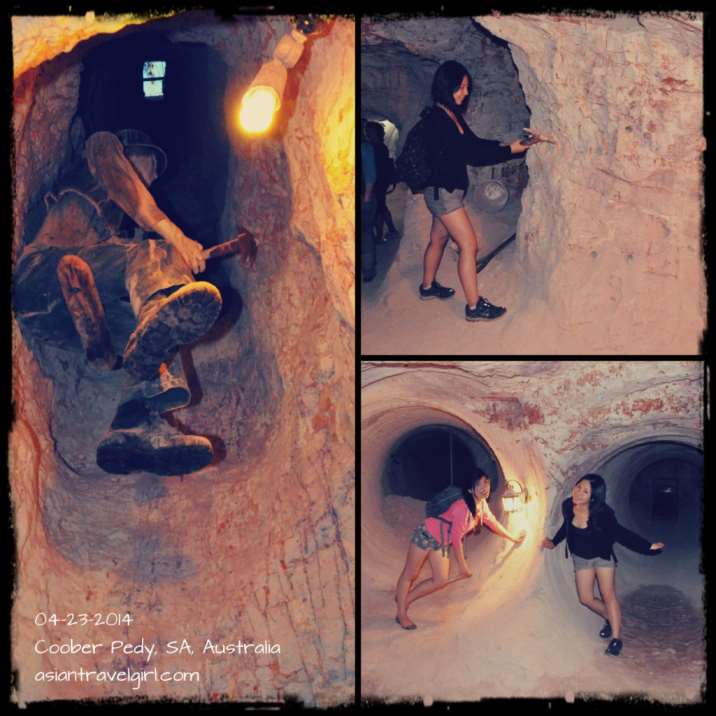 This place used to be an actual opal mine.