On a Saturday night we went to the new Hilton restaurant in Adelaide. The restaurant and lobby lounge had being renovated from April to October 2015. The new restaurant, Coal Cellar + Grill was only opened for less than two weeks and has had a complete makeover with different style of cooking (The Head chef before is now working at Hill of Grace in Adelaide Oval). 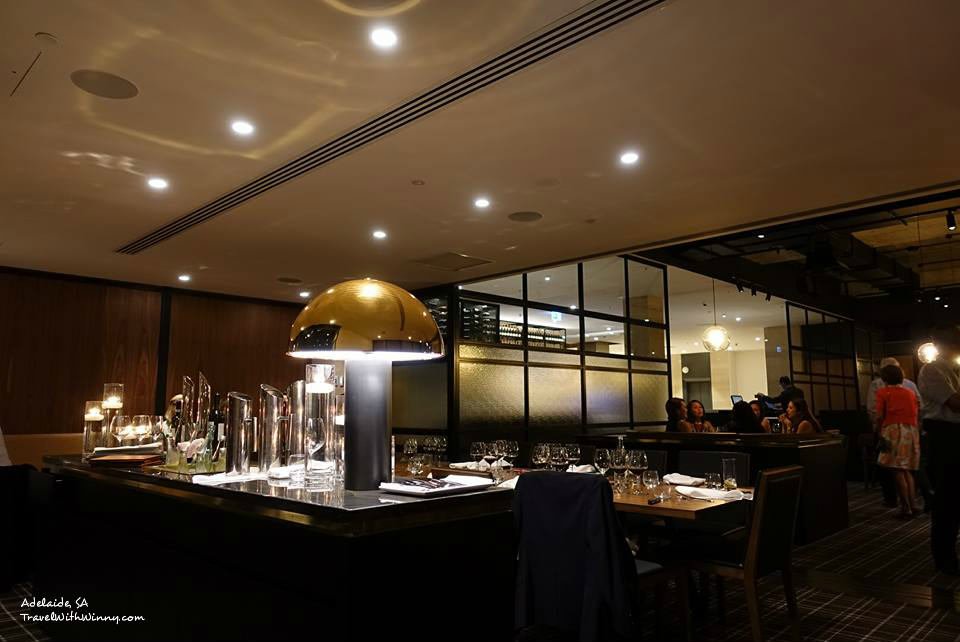 Coal Cellar + Grill was quite classy. The setting had a modern touch, a little dim and had many candles. The customers there were a mixture of elegantly dressed, business attire and very casually dressed hotel guests. The hotel itself was quite packed that day as there were three functions that was operating at the same time. The function food all comes from the restaurant!

Menu at Coal Cellar + Grill. A huge selection of grill food and entrees but only 4 mains to choose from. Guess people are here for the grills.

As the name suggested, Coal Cellar + Grill serves a lot of grill meat and uses many traditional Australia native ingredients. However We decided that the mains they serve looked more unique and we thought we might give the Grill a miss this time. We ordered four different entrées and three different types of mains.

This first entrée was an excellent start to our meal. It was very flavourful and the meat did not taste raw at all. I had this Tartar in many countries and many of them do not even come close to the standard of this dish. The Chives and Capers mixed in the raw Wagyu has a really good flavour and the texture of the meat was superb. This is definitely the dish to try if raw beef isn’t a problem for you.

The Tartar also came with garlic bone marrow cream with a bit of anchovies on top. It was served on an actual bone and was quite delicious as well..

Seared Kingfish was served in large chunks, super soft, slightly raw and very flavourful. The sauce that the seared Kingfish was in was a little Asian influenced. It was creamy with lime leaf, chilly, Thai basil and roasted peanuts. The taste was addictive. Loved this dish! 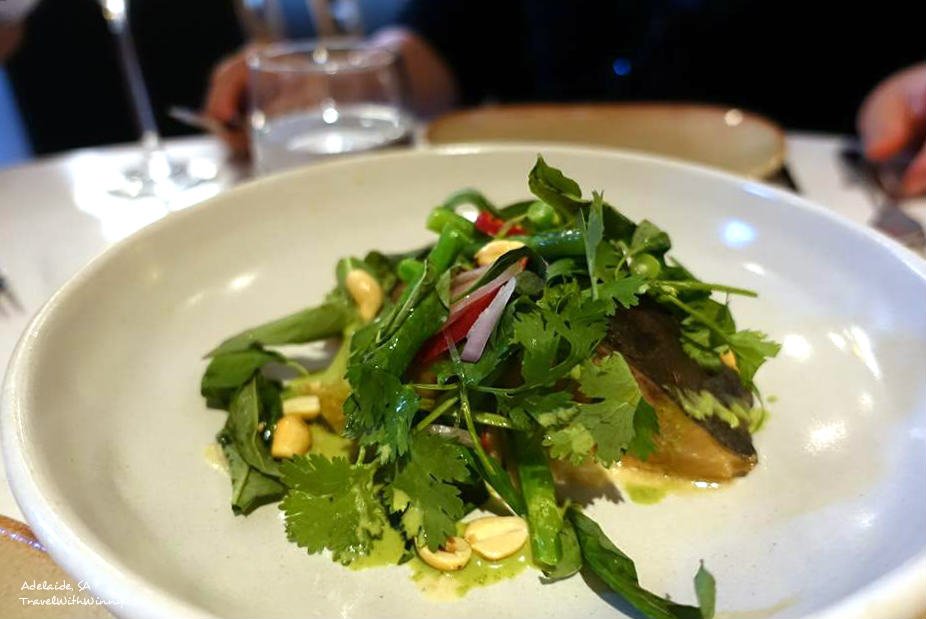 For people who don’t know, Terrine is similar to pâté but made from a mixture of coarsely chopped meat. Coal Cellar + Grill did an excellent job with the duck terrine. The duck meat was really tasty and juicy but not flavourful so it could match well with the house made piccalilli and prune purée. 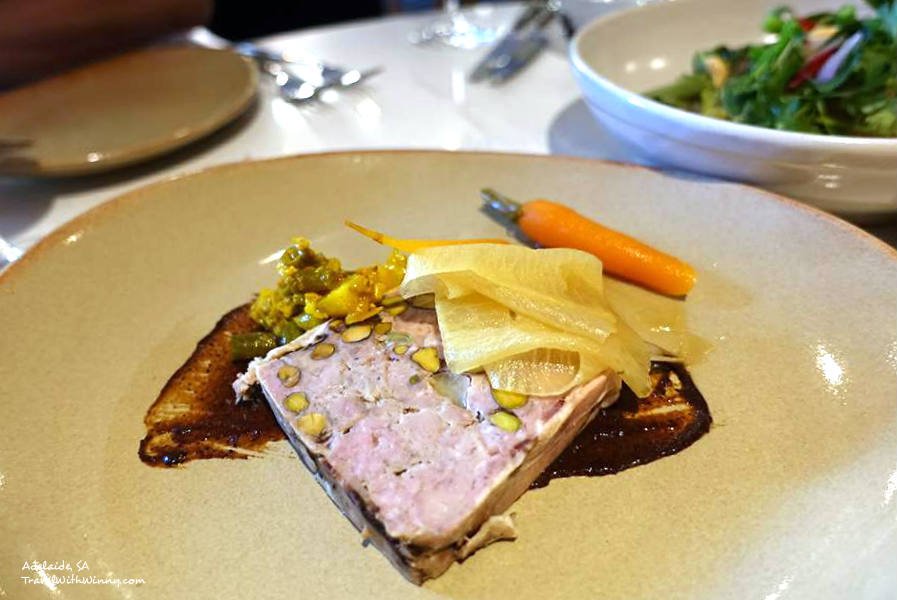 Tasty, interesting and good plating skills but is my least favourite out of the four entrees; not because it didn’t taste good but just that the other three was more unique and tasted amazing. The squid ink Ocean trout tasted like freshly smoked ocean trout (squid ink really doesn’t have much of a taste normally) and it surrounds the Horseradish crème fraiche. The Horseradish crème fraiche has a tad smoky taste. 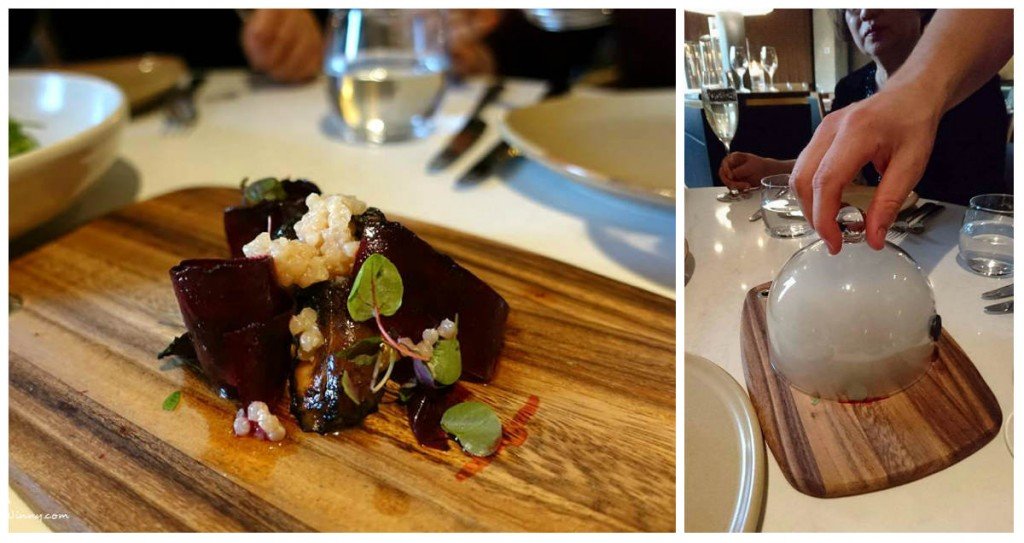 This is a vegetarian Dish but really well made by Coal Cellar + Grill. The pasta was made and cooked very well. The roasted pumpkin goes really well with the pumpkin seed pesto. The pesto has a nutty roasted flavour and the pumpkin was sweet and very tasty. It was an interesting combination with the Bok-Choy but the dish worked very well. 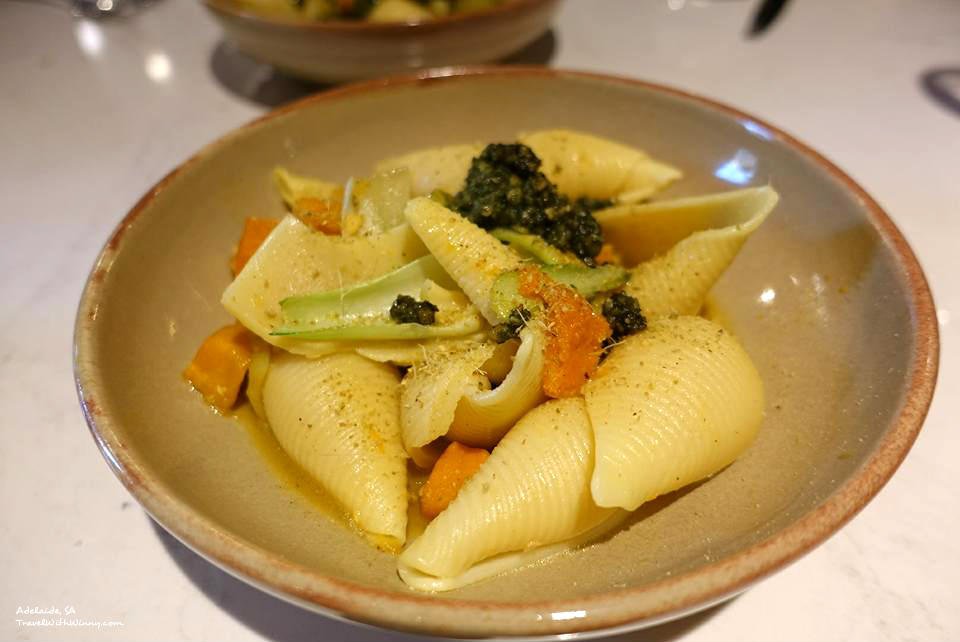 The ribs have a very interested taste with the rum-pineapple Glaze. We had a common agreement that it tasted a bit like star anise which is not my personal favourite. The meat falls straight off the bone and was juicy at bits. We did find a few bits too dry and hard to chew. 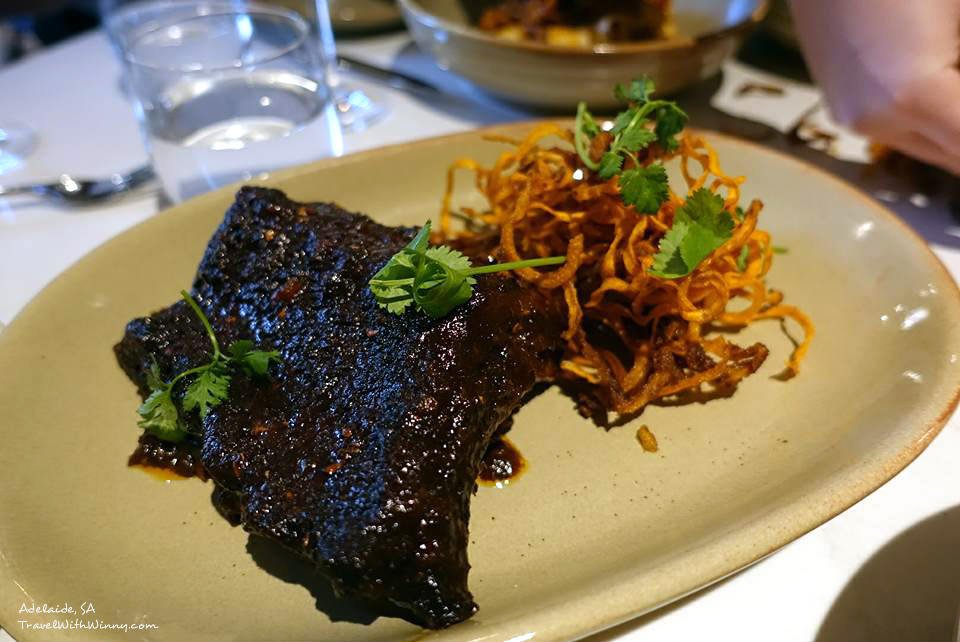 The dish comes with Sweet Potato Fries. IT was quite uniquely made with finely sliced, curly sweet potatoes. The sweet, salty and carbs combo in this sweet potato side began some serious fries addiction.

This pappardelle was definitely home-made and tasted really good. You would hardly know the meat comes from Oxtail as the pieces of meat are cooked till it’s off the bone. There are no bones in this dish. The sauce with the meat was cooked really well, tomato based and it was not overly saucy. This Pappardelle was top restaurant standard. 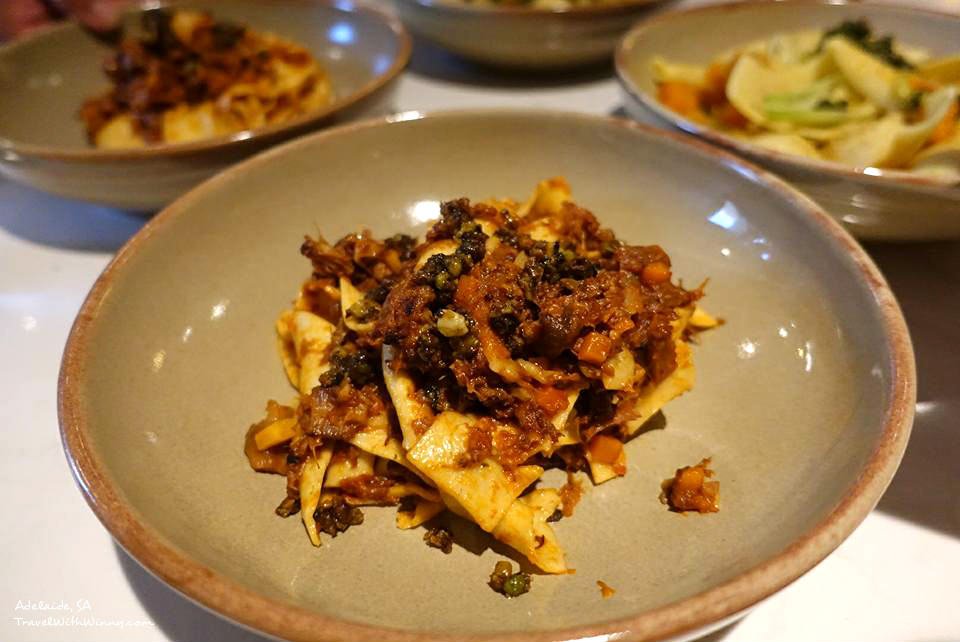 Since we had such a great time with the Mains and entrée we thought we would give Coal Cellar + Grill a go with their dessert and we were not disappointed.

This bombé was as Australian as it can be. The meringue was thick with lemon myrtle smell and it was wrapped around a wattle seed Ice-cream. The beautiful tasting Wattle seed ice cream had a slightly sour Davidson Plumb sorbet centre. This Dessert was top restaurant quality and I was quite surprised that dessert can get this good in Adelaide Hilton restaurant. 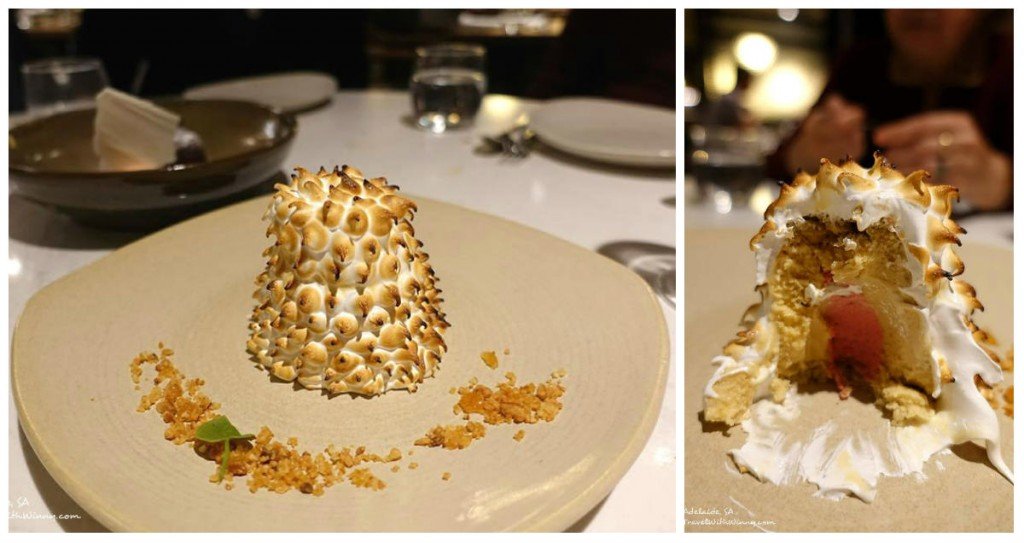 The Jaffa Fondant was quite nice. It wasn’t overly surprising but the fondant was well made with a runny chocolate centre. The Blood orange sorbet that came with the dish was quite tasty too but be sure to eat it melts quickly. 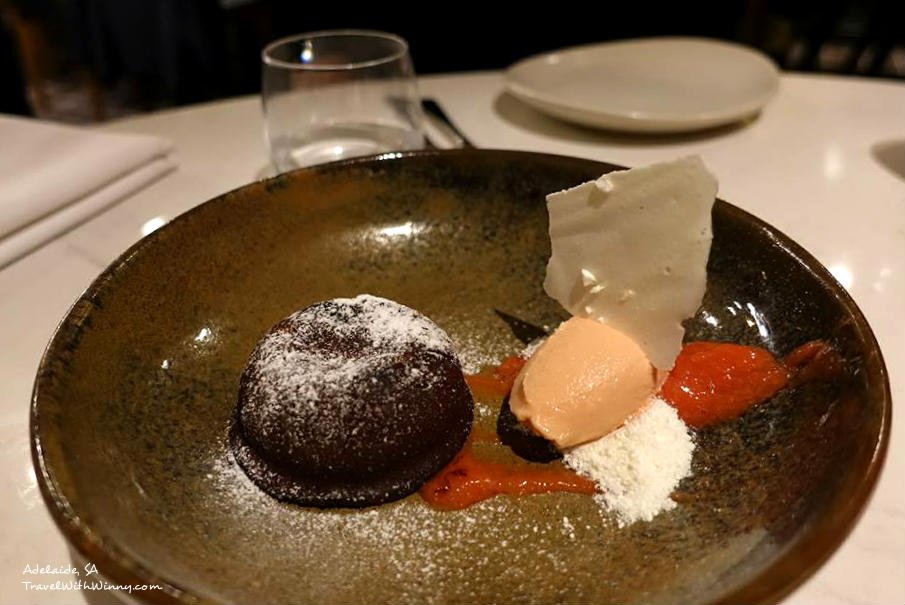