Girls in big puffy dresses looking like they walked out of the 1920’s, wrestling, fighting and hair pulling in a ring. This was what we saw in El Alto, a satellite city to the capital of La Paz in Bolivia. These girls are the fighting Cholita. svsvdsbvzdbzdb 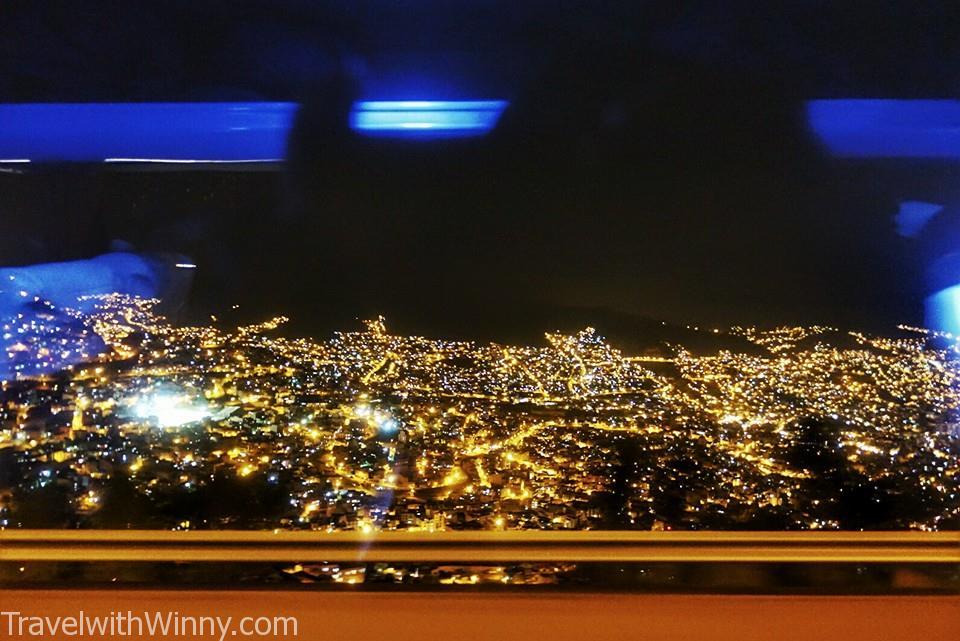 La Paz is located 400m below El Alto. This image of La Paz is taken only half way up to El Alto.

Winny and I arrived in La Paz after 3 months of travel. La Paz is the capital city of the poorest country in South America, Bolivia. Besides being quite modern, many parts of La Paz are quite dangerous to wonder around by ourselves. We did however travel into El Alto, the sister city of La Paz where the poor working class live, to watch the famous Cholita fighting. 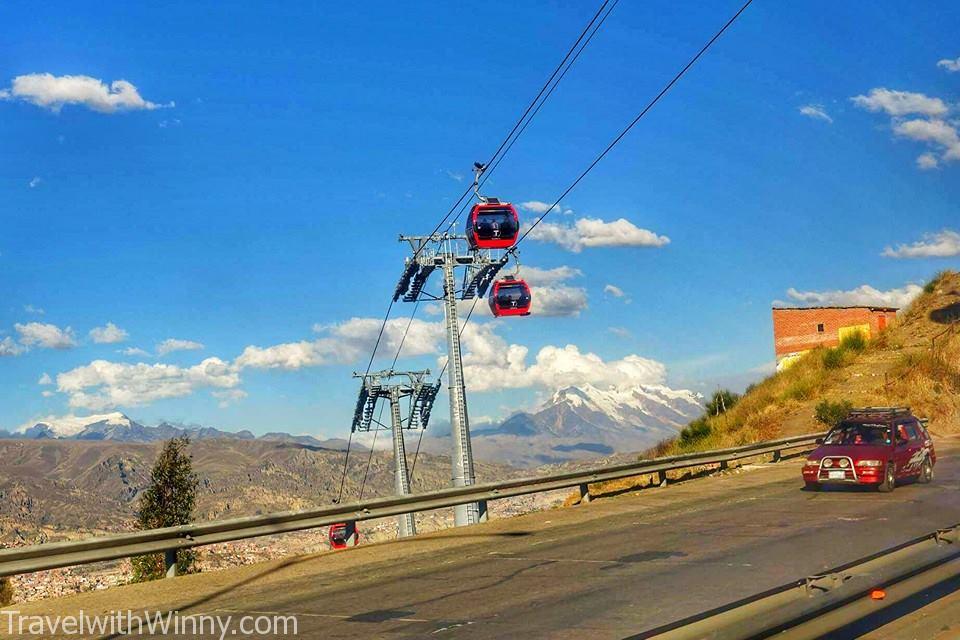 You could take the unique transportation of cable car between El Alto and La Paz.

So who are these Cholitas and what are these fights about? There is a wide realm of definitions and feelings behind the word Cholita, but typically Cholita means a girl of native or mixed heritage in South America. The word Cholita is derived from the word Chola, but a tough hardcore Latina gangbanger can be referred to as a Chola. Alternatively if the world Chola or Cholita is used amongst family, friends and neighbors, they could simply be implying that this girl is a nice indigenous woman. 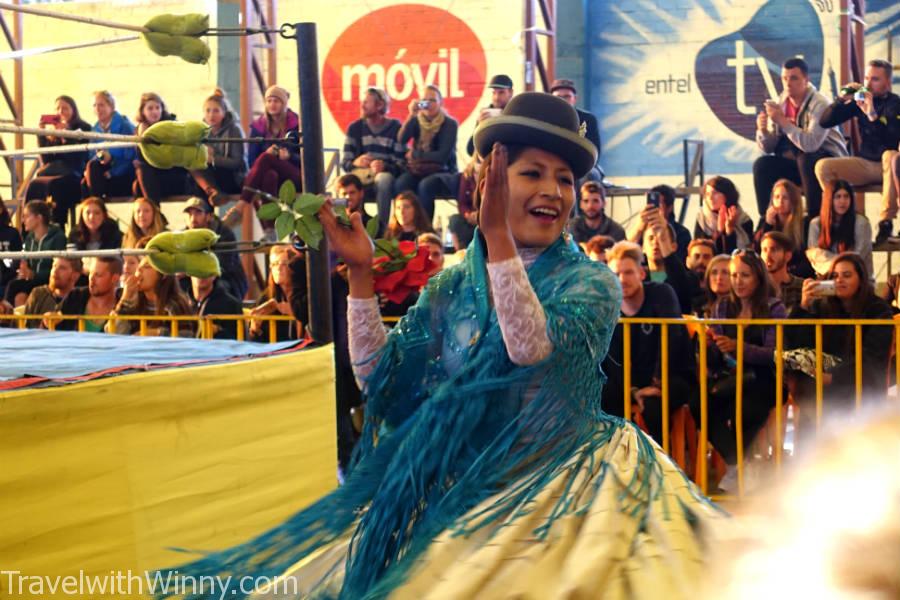 The Cholitas all came out wearing their full gear of elegant clothes.

In Bolivia, a Cholita can be easily identified by by their distinctive, elegant outfits. Until the recent years, they could be routinely discriminated against and even be refused entry to certain restaurants, taxis and even public buses. They were thought to be poor, uneducated and worked as servants for the middle class. They were not welcomed in the wealthy suburbs. In recent years there are changes in the social attitudes towards Cholitas. These girls are now educated, studying in universities and work important roles in the communities like lawyers and bankers. 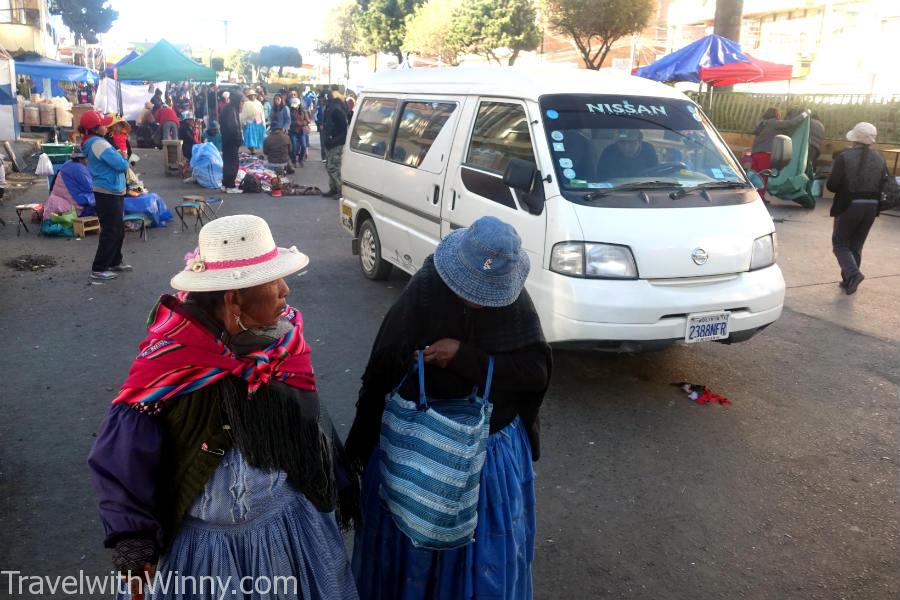 Traditional ladies like these are known as Cholitas as well but that doesn’t mean they wrestle!

The fighting began in the sprawling and rough city of El Alto. A group of indigenous Aymara and Quechua girls, inspired by the Mexican fighting, lucha libre, sets up the fighting ring in the heart of El Alto in recent years. Each Sunday, these Cholitas wrestle, leap through the air and dressed in their colorful dresses which they wear on a daily basis. These girls do not earn much, taking home only USD$20-30 per fight but they earn the reward of notoriety and fame. Many of the Cholitas carry on becoming traffic cops, television stars and even politicians. 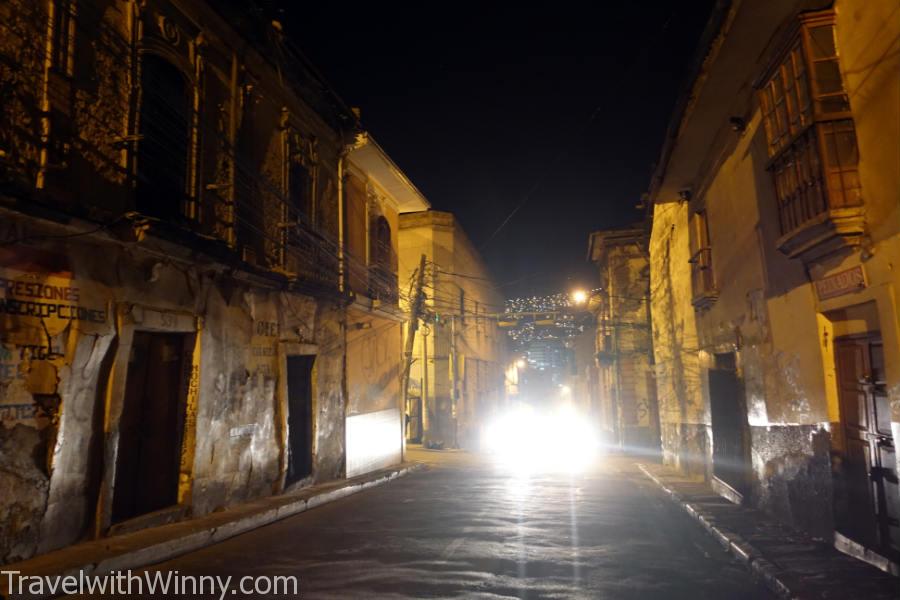 As soon as you are in El Alto, the streets feels a lot more dangerous!

In May 2016, Winny and I joined a Cholita fighting tour. We were picked up by the tour group in an extremely old and rustic bus. After more than two hours of picking up passengers, watching our bus strenuously climb up extremely steep hills and waiting in traffic, we arrived in Cholita fighting stadium in El Alto. The Stadium appeared to be transformed from a huge tin shed. 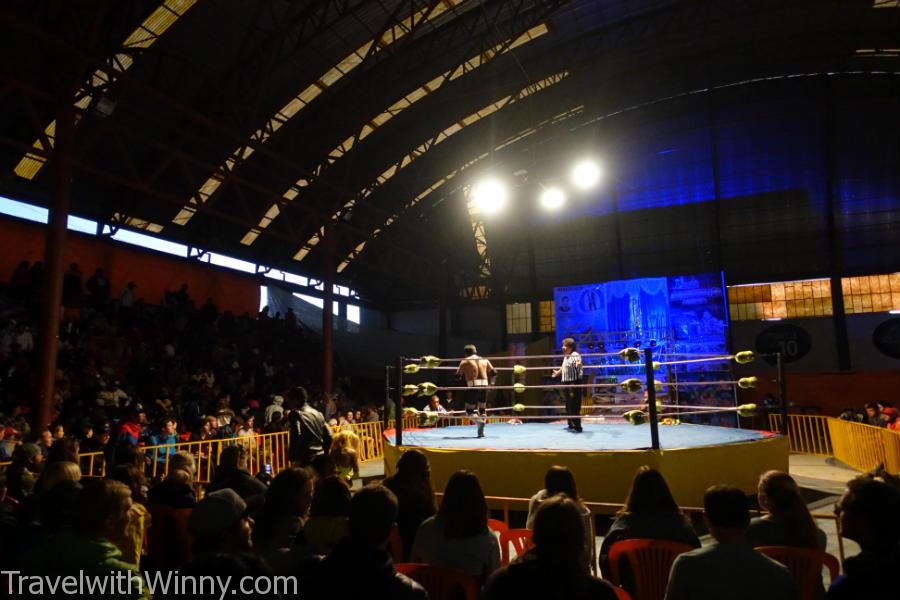 The crowd consisted of locals and tourists. We learnt that the tourists are required to pay five times more than the locals but are given the chance to sit on plastic seats directly around the fighting ring. The locals all sit on cement steps situated on one side of the stadium. By the time we entered, the fighting had already began. 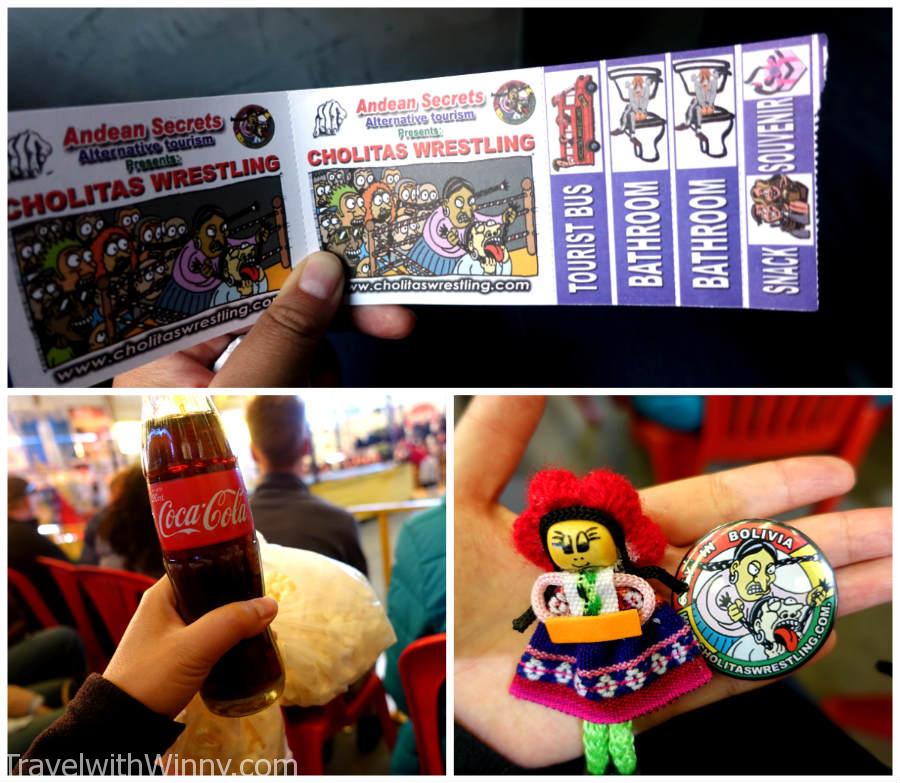 The gifts and snacks exclusive to the tourists.

The introductory fight consists of 4 males fighting in teams of two. The fighting is essentially like the Mexican, lucha libre. There were a lot of body slamming, arm twisting and diving. The whole fight was pretty theatrical and the actions were quite rehearsed but still entertaining. The umpires seems to somehow join the fight to help a team which was quite confusing at first but funny to watch. 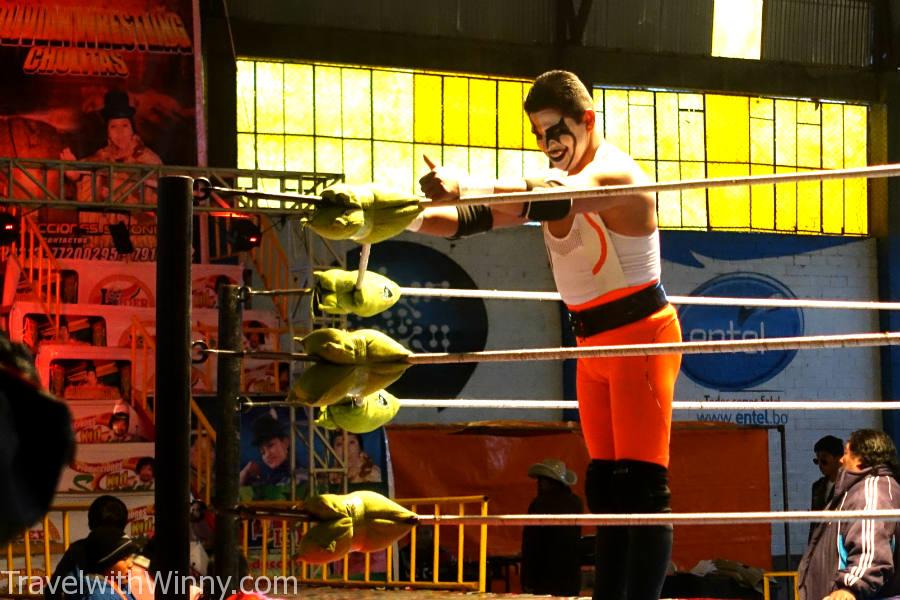 The male fighters all wear a mask or have scary face paints.

After the male group fight, we had the main show on the way. We had a Cholita that came on stage first in her full outfit, bowler hat, jewelry, shawl, skirt and petticoat. She came on stage acting extremely tough, roars to the crowd and paces around like a fighter whilst taking off her jewelry and outfit. We soon learnt that this was the Cholita acting as the favorite and also as the villain. After the show of the first Cholita, we had fire crackers banging away introducing a whole dance group dressed in fancy traditional clothes jumping along to traditional music. In this dance group came the second fighting Cholita in her full outfit, pretty, elegant, skinny and accompanied with a handsome young man giving her flowers. This was the Cholita that we were supposed to like and cheer for. 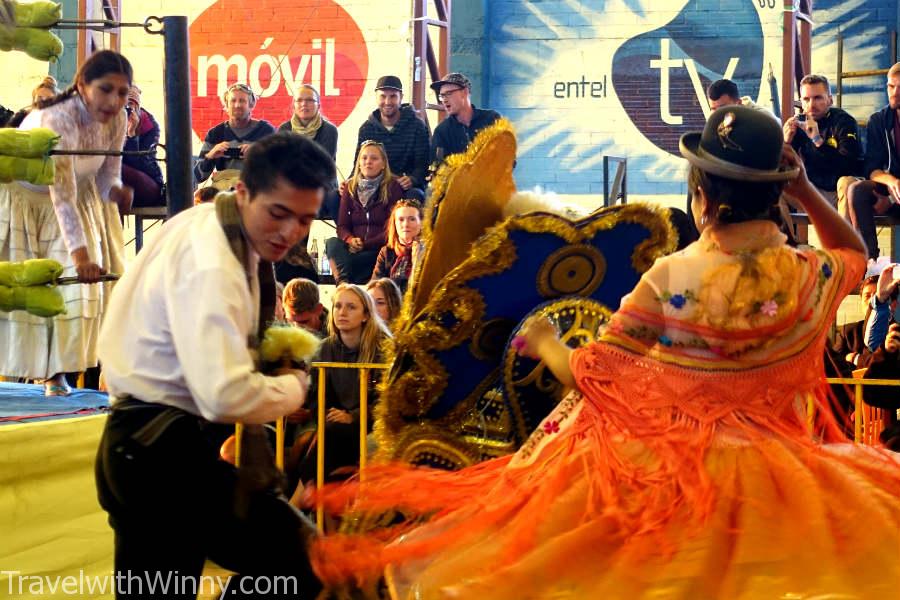 The Villain Cholita could only watch the pretty one coming out dancing with a huge dance group and a pretty boy.

The villain Cholita soon acts to be jealous and began to beat up the pretty Cholita before the dance group even had a chance to get off stage. The one way beating includes hair pulling, water spraying, stage throwing which completely disgraced the pretty fighter. The local crowd really gets into the play as well, booing at the villain, throwing food and bananas at her and all gets really heartbroken seeing the pretty girl getting beaten up. Although we could see the fight was all set up and the fighters took many measures to prevent badly hurting the other person but the pain is real and the stunts were quite amazing. The pretty Cholita even gets thrown into the crowd. After a one way fight for a while, the pretty Cholita somehow turned the fight around by probably switching her Super Saiyan mode on. She will start fighting back against the villain and the whole local crowd will barrack and cheer for her. 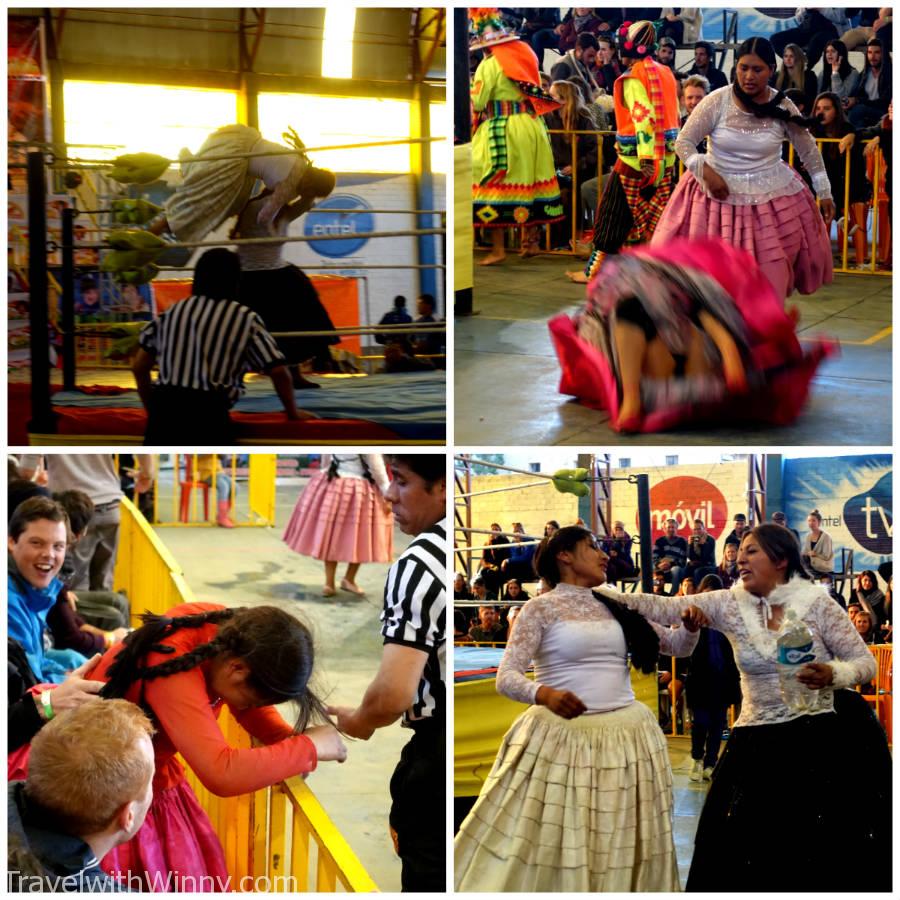 Although we know it’s all part of the act, but it’s thrilling to see them wrestling hard. 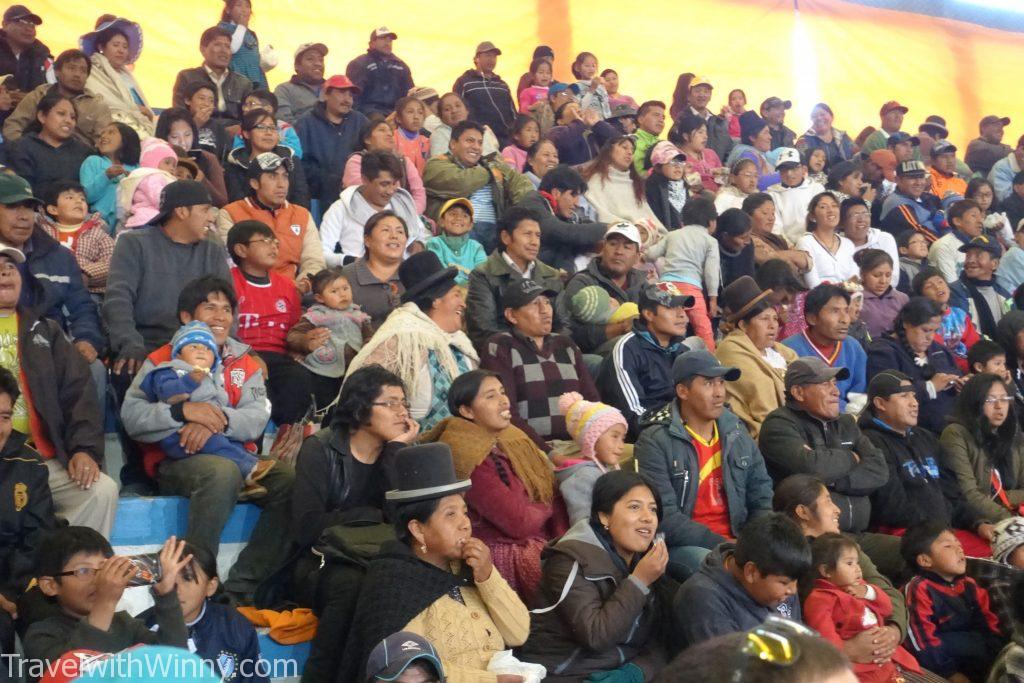 All the locals were so passionate and into the fight. Including the little kids!

There were three girl fights overall and the plot were essentially the same. After these three girl fights we had a Cholita vs a huge man. The plot was still the same again but instead of the villain Cholita we had a man. The take away story is that the pretty Cholita always wins. However the fights were still interesting to watch. At one point one of the villain Cholita even grabbed a 2L bottle of soft drink and sprayed it into the local crowd when they were booing too hard at her.

This was the Cholita vs Man fight. She wins in the end!

After these fights we had a finishing fight of a man dressed in green tights and another man dressed in white tights fighting two man dressed in wolf man costume. By this time it was getting quite late and tour group was taken back on the bus before the fight had even finished. These fights began around 5pm and finished after 7pm. 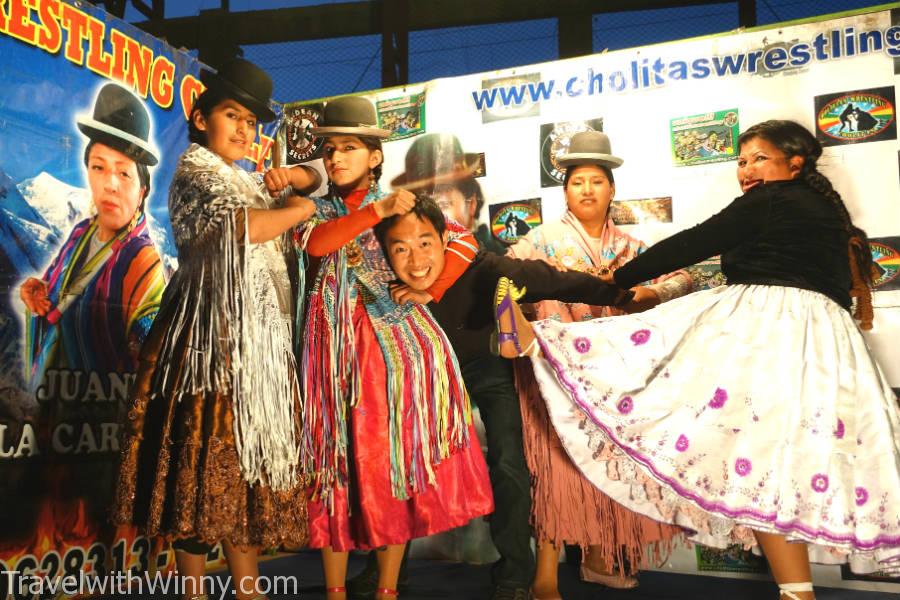 Before we leave, we had a chance to have a photo with these pretty fighters.

Overall anyone who had watched Cholita fighting can say that these fights were all planned and the moves were scripted. But that doesn’t take away the fact that these Cholitas are truly tough. The stunts that these girls perform are extremely hard and the pains are real. Where else in the world would you be able to see a pretty girls wearing a huge dress, jumping through the air and strike down opponents! Watching Cholita fighting is like watching Tango in Buenos Aires. Please see our photo and video evidence of these tough fighting Cholitas. =) 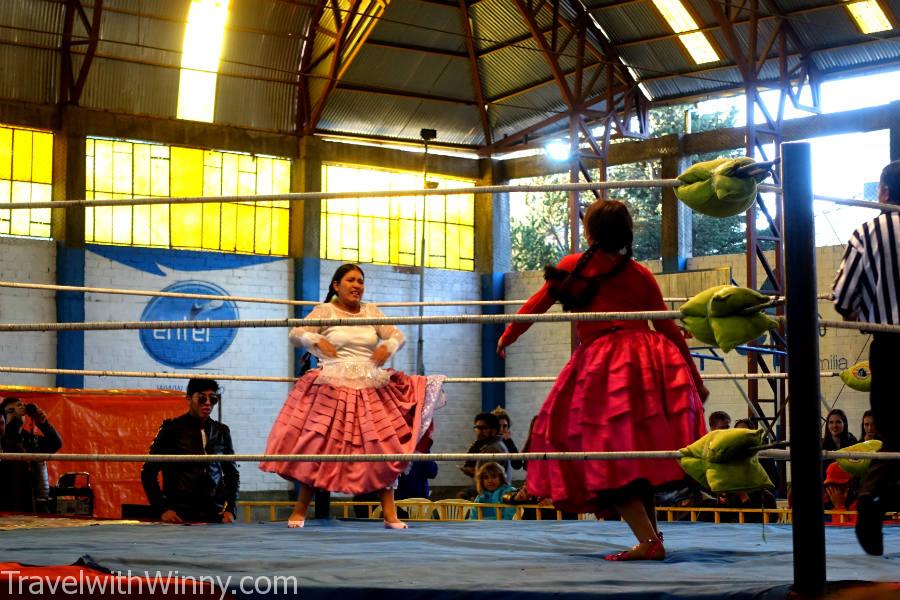 When you arrive at the highest city in the world, don’t foget to come and watch Cholita fighting!