The pathway we are walking on is built directly on a stone cliff and looking over the guard rail there is a sheer drop of over 100 meters. I am normally not afraid of heights but looking at this drop is making my heart thump. Looking in the distant is a magnificent view of the valley and river. This is the very famous and scenic walkway in Spain called Caminito del Rey. It was known to be the “world’s most dangerous walkway” after many adventurers and thrill seekers died challenging the old pathway. 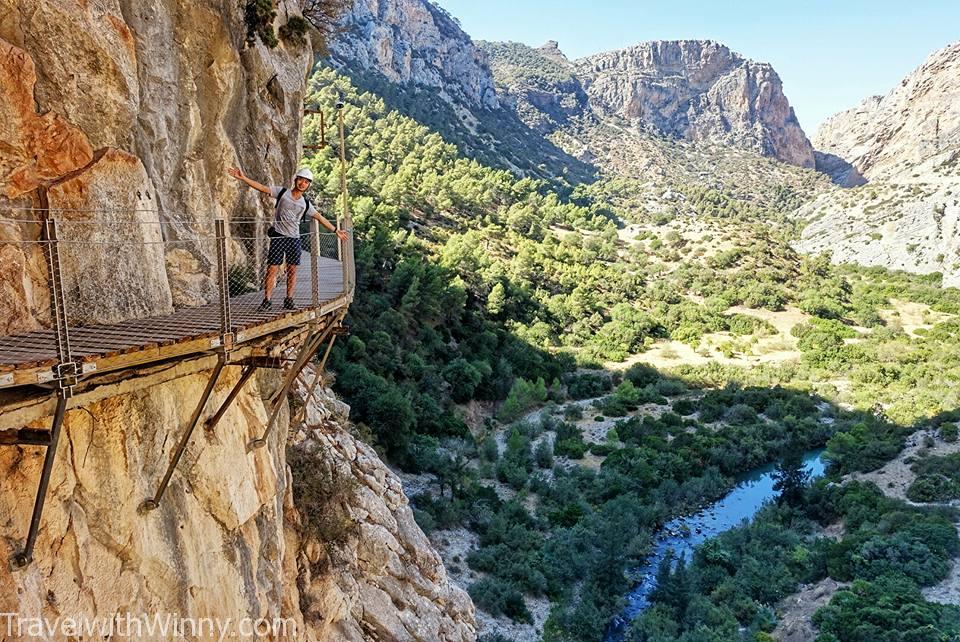 Most of the path in Caminito del Rey is pinned directly on cliff walls.

El Caminito del Rey is a walkway pinned along steep walls located near Ardales in the province of Malaga. It was initially built in 1901 to provide hydroelectric power builders to cross between the falls. The direct translation of “El Caminito del Rey” is “The Path of the King” because King Alfonso XIII crossed the walkway in 1921 for the inauguration of the dam. The walkway was quite popular from the beginning and many people cross it for the thrill and the scenery. 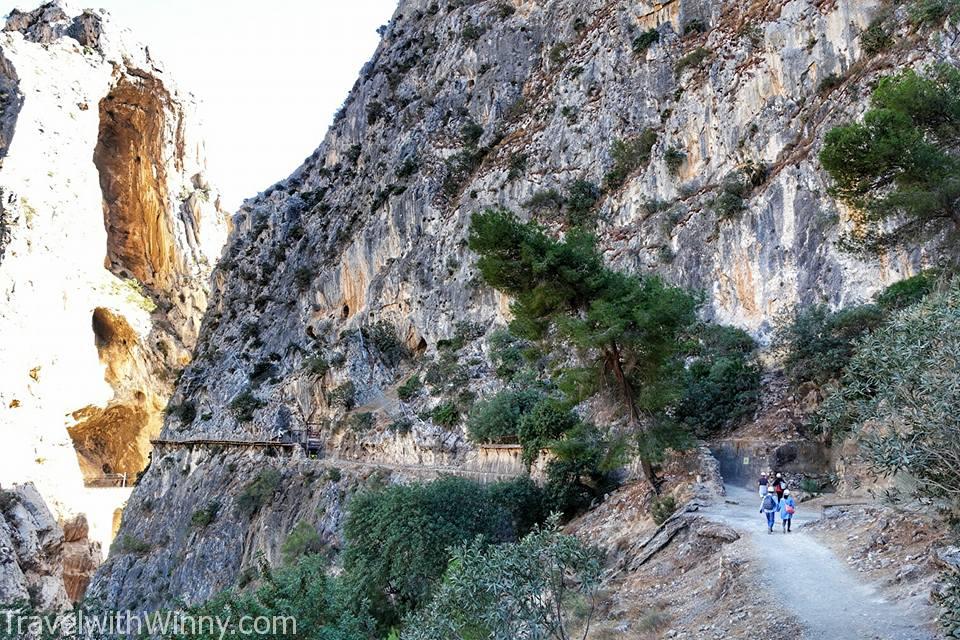 Caminito del Rey is an extremely scenic pathway. No wonder it is so popular!

However, over the years the original path began to deteriorate. Few of the original handrails remains and there are huge gaping holes in the original concrete pathway. Some of the concrete paths have even completely collapsed leaving only steel supports protruding out of the cliff walls. 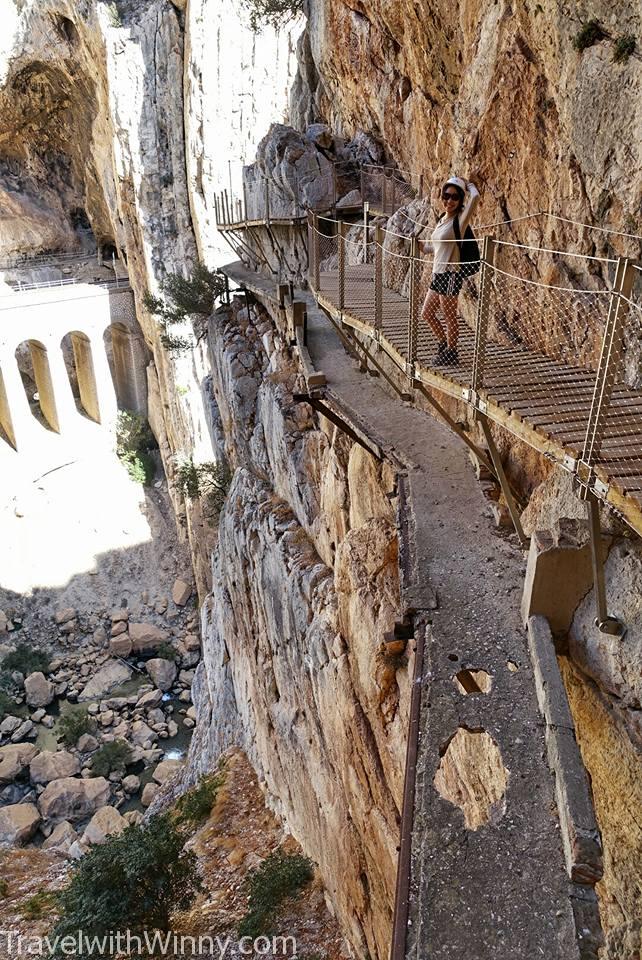 The old path is left beneath the new path. Here we could see a section of the old path that has deteriorated with huge holes. 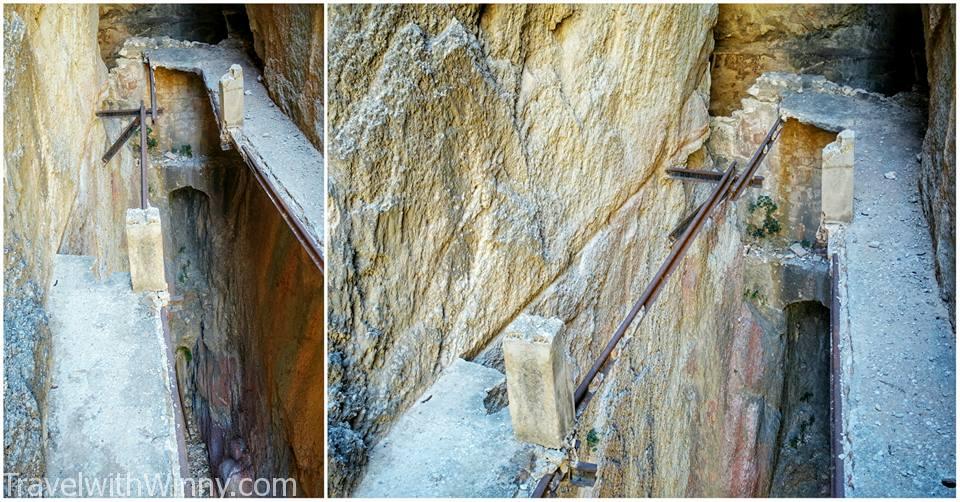 There is a 100 meters drop beneath this section of old path. No wonder people died challenging the old pathway of Caminito del Rey.

In 2011, the local and regional government began to restore and rebuild the walkway. The total cost of this new trail, including car-parks and museum, was 9 million Euros. The new path was opened in March 2015 and it is now listed as one of the best new attractions for 2015 by Lonely Planet. 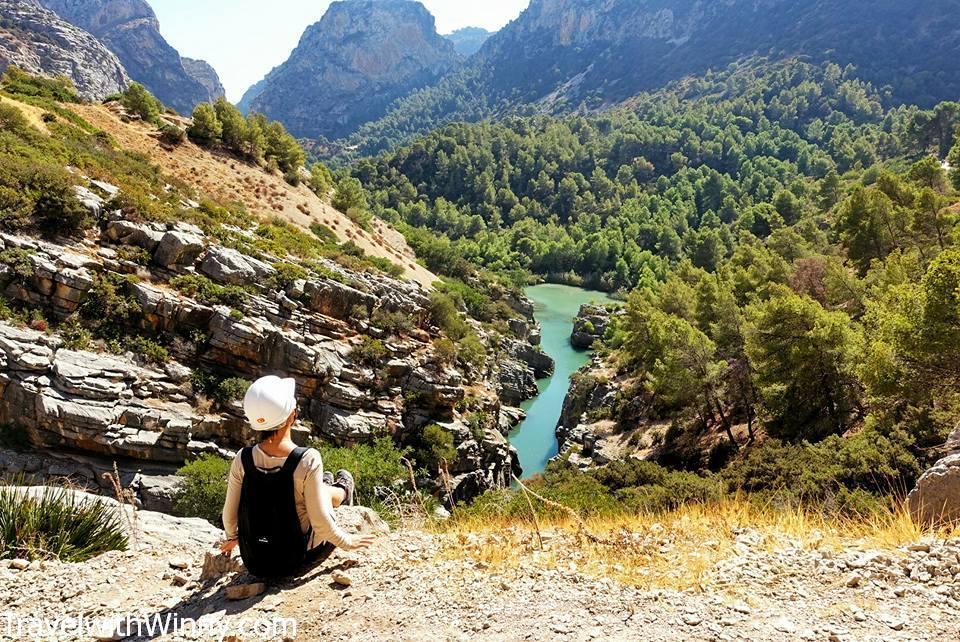 Remember to stop and enjoy the beautiful scenery!

Winny and I decided to something challenging when we were in Spain. We decided to take Winny’s mum, who is afraid of heights, on a hike on Caminito del Rey. For week coming up to the hike, Winny’s dad had to constantly talk her into it and pumping her up for the occasion. We booked the tickets for Caminito del Rey around 2 months before the hike and we found that many time slots had already been booked out. It is a very popular hike but the ticket only costs 10 Euro per person. 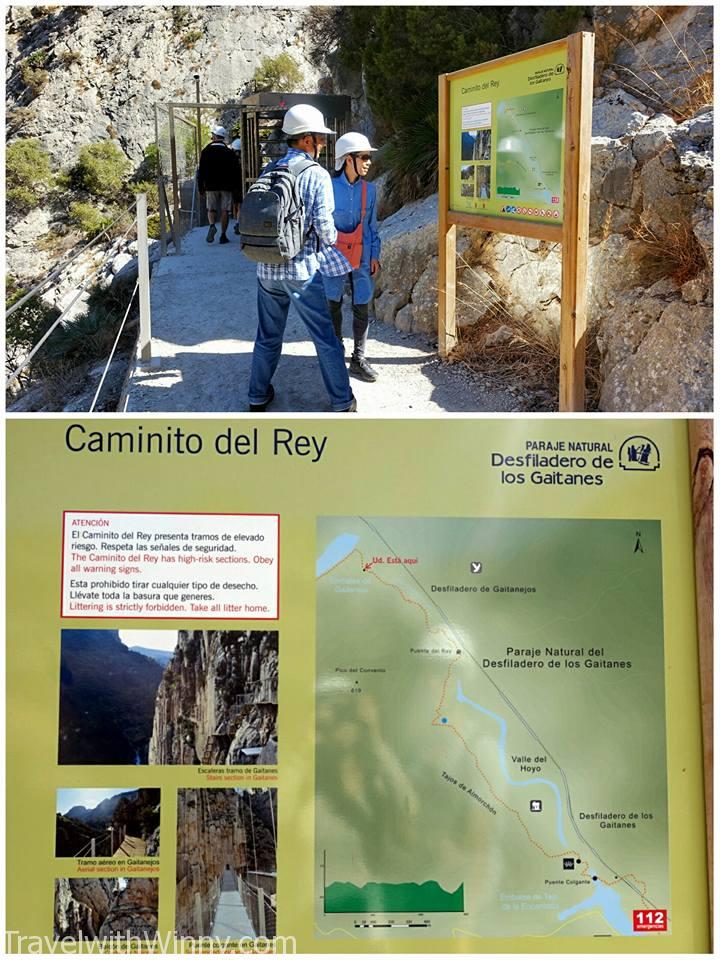 There are signboards through out the path that indicates where you are on the map and what to expect!

Finally the day had come and we found ourselves slightly late for our hike as we didn’t realize that the starting point for the hike is another 1.5 KM walk from where we parked our car. Free car-parks are quite scarce and people were parking at quite ridiculous places. Luckily we found a car park that allowed us to park for the day for 2 Euro. 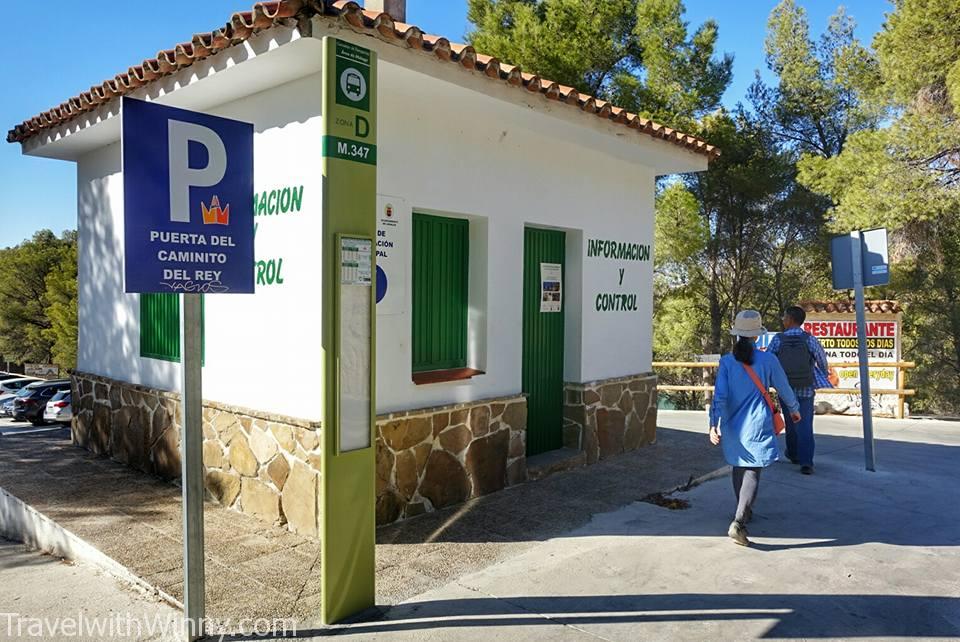 We were glad to find this car park which only costs 2 Euros! Free parks are hard to find and looks dangerous.

From the car-park we found ourselves walking through a huge dimly lit pedestrian tunnel that spans for around 500 meters. On the other side of the tunnel we had quite beautiful views already of trees, rivers and mountains. Since we were short on time so we didn’t take too many pictures. 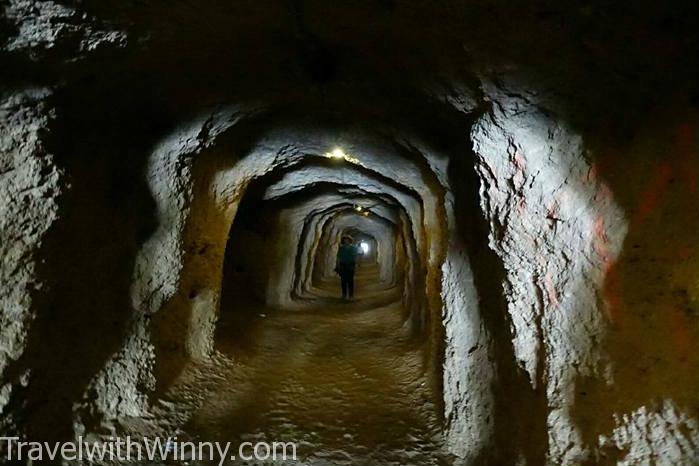 The pedestrian tunnel that goes on and on. Took a while before my eyes adjust to the darkness in here!

We were 10 minutes late when we arrived at the meeting point and luckily we found out that we can still go on the trail with the next group of people who will be starting their hike at 2PM. The hikes begins at every half hour interval. 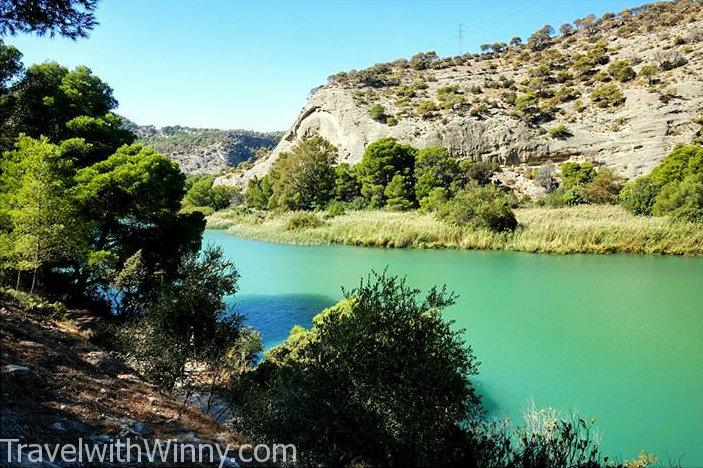 Paradise on the other side of the tunnel!

We were quite surprised to find that there were quite a few young and old people doing this hike. Caminito del Rey had surely became a much safer trail after it has been restored. We were however still made to wear hard hats to protect us from potential falling rocks from the cliff faces. 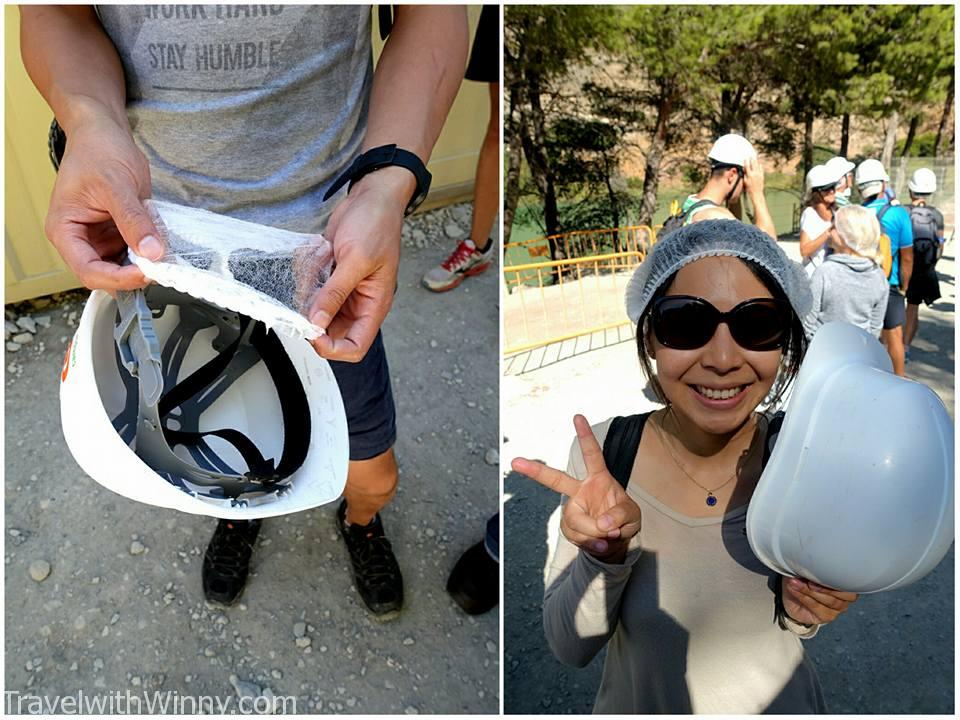 After our tickets were scanned, we were given hair nets and hard hats at the beginning of the hike.

We were given a hard hat each with hair nets at the starting point after our tickets were scanned. The Spanish people are really into their hygiene. We were made to wear plastic gloves before we could touch fruits in the supermarkets. 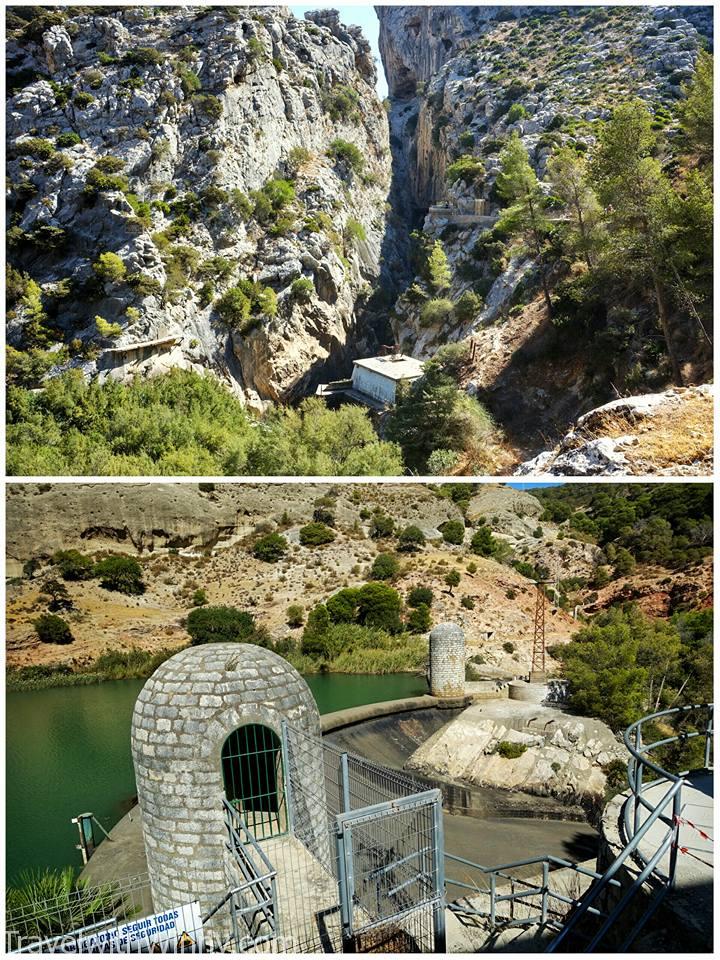 After we started the hike, we saw the dam for the hydroelectric plant.

Soon after we were given the permission to start the hike, we found ourselves walking on the brand new walkways that are pinned on cliff faces in the gorge. This gorge was quite spectacular with a river flowing right at the bottom. 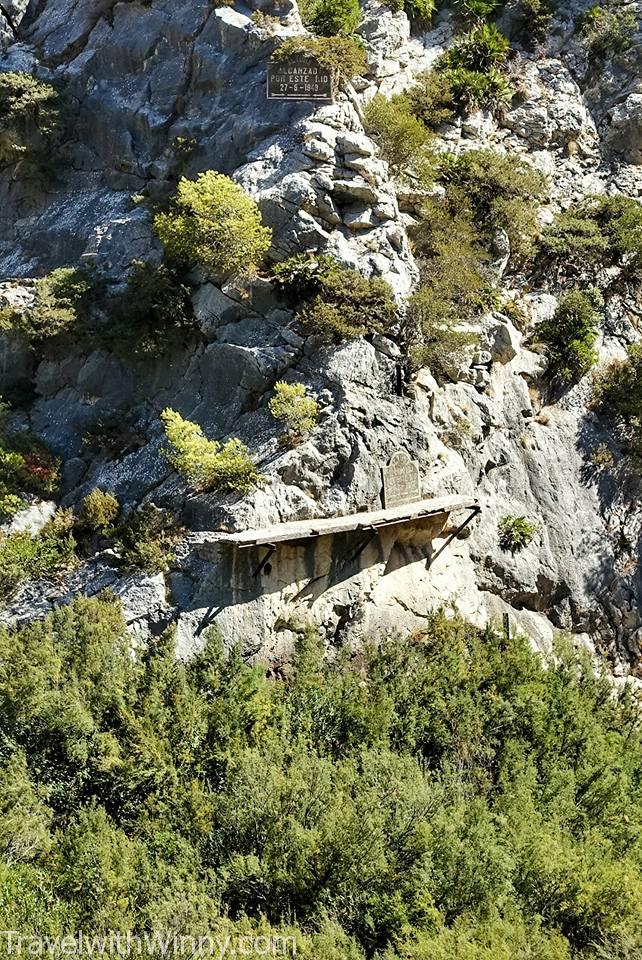 Sections of the old pathway was visible on the opposite side of the new path. There is a plaque of some sort visible from here.

We could see bits and pieces of the old path that was built quite far below at this point. The old path was really in shambles by now and we were glad that we had nice flat wooden planks to walk on now. 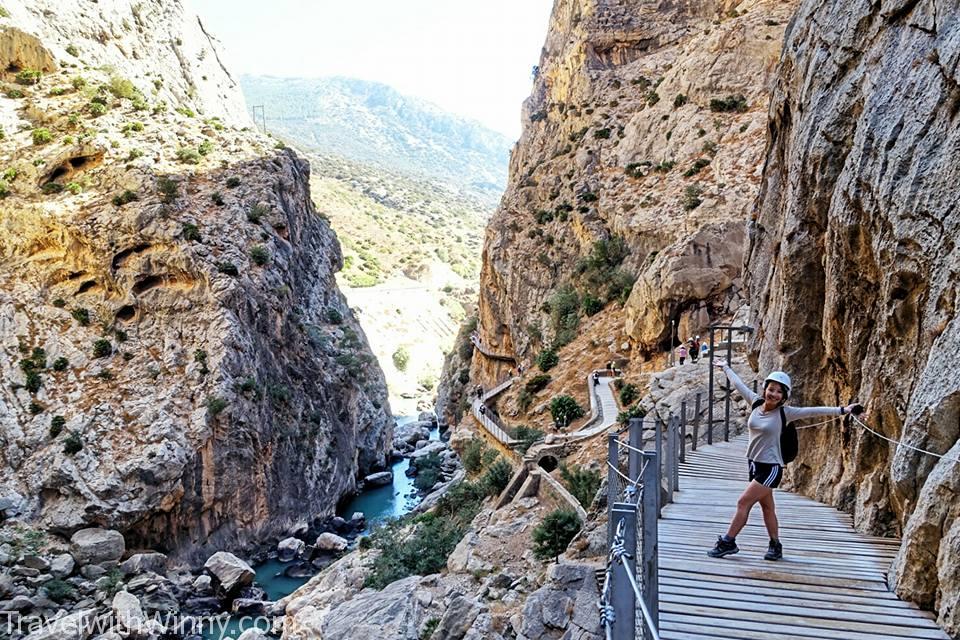 The big and wide wooden plank new path. The new Caminito del Rey was only opened in March 2015.

Since there isn’t really any time limits, we took our times taking photos and soon we found that we were the last one in our group. Because the path was made quite well here, Winny’s mum was coping quite well at this point. we were all quite awed at the scenery and at our pathway which was built so magnificently. 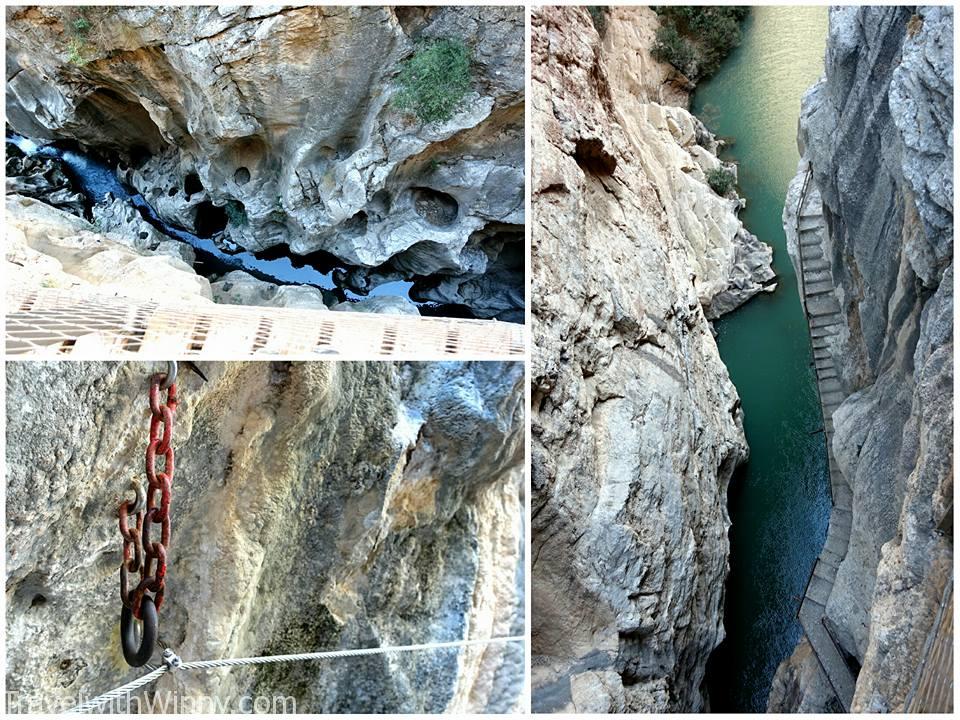 The gorge was quite deep and we could see bits of the old paths at the bottom.

We found the gorge opened up by the end of the first section into an open area of spectacular view. The walkway was still pinned against the cliff face but it leads slowly to a dirt path. There were quite a bit of ruins that could be seen here. There were ruin houses, ruin bridges and we could still see the old path, although it is not accessible anymore. 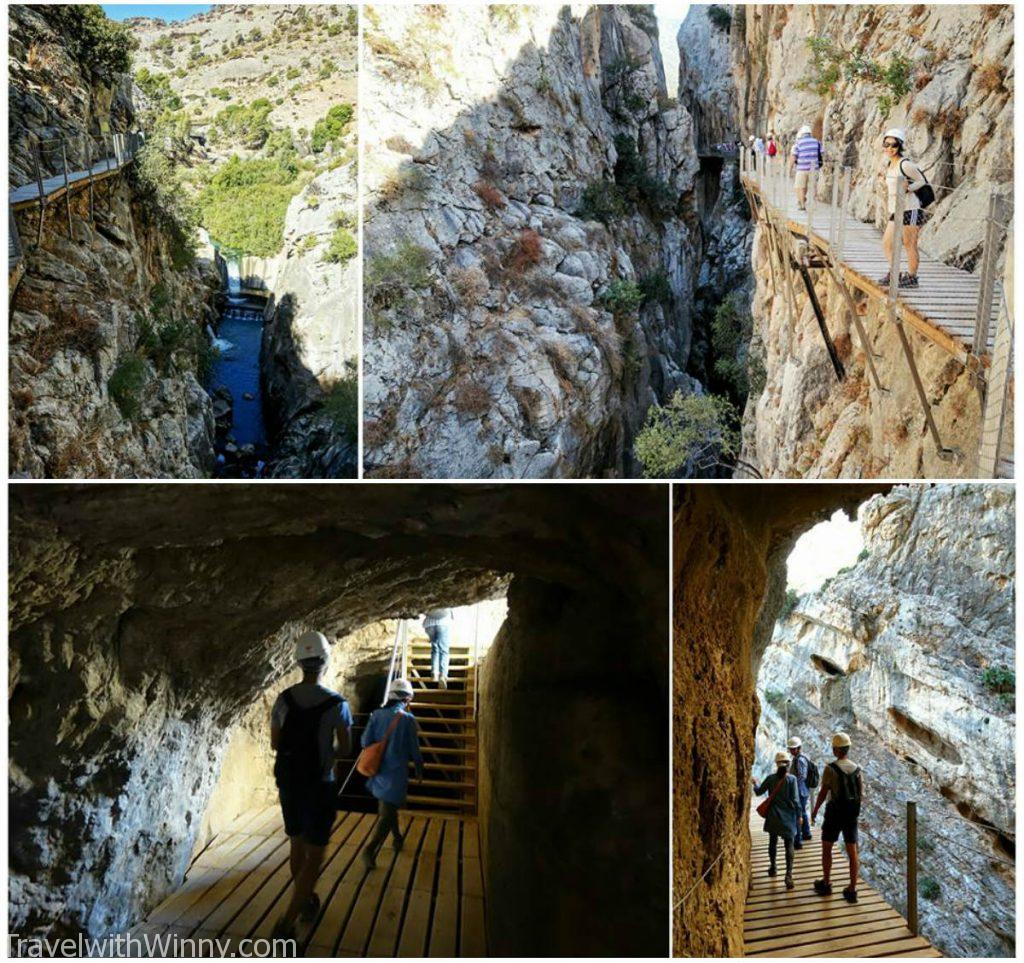 We had to walk in and out of tunnels and up and down stairs. Each bend was full of mystery.

We could see that on the old trail, there are still etchings on the walls left from hikers that did this trail during the time when it was closed off. There was also a plaque on the wall for the three people who died in year 2000 hiking this trail. 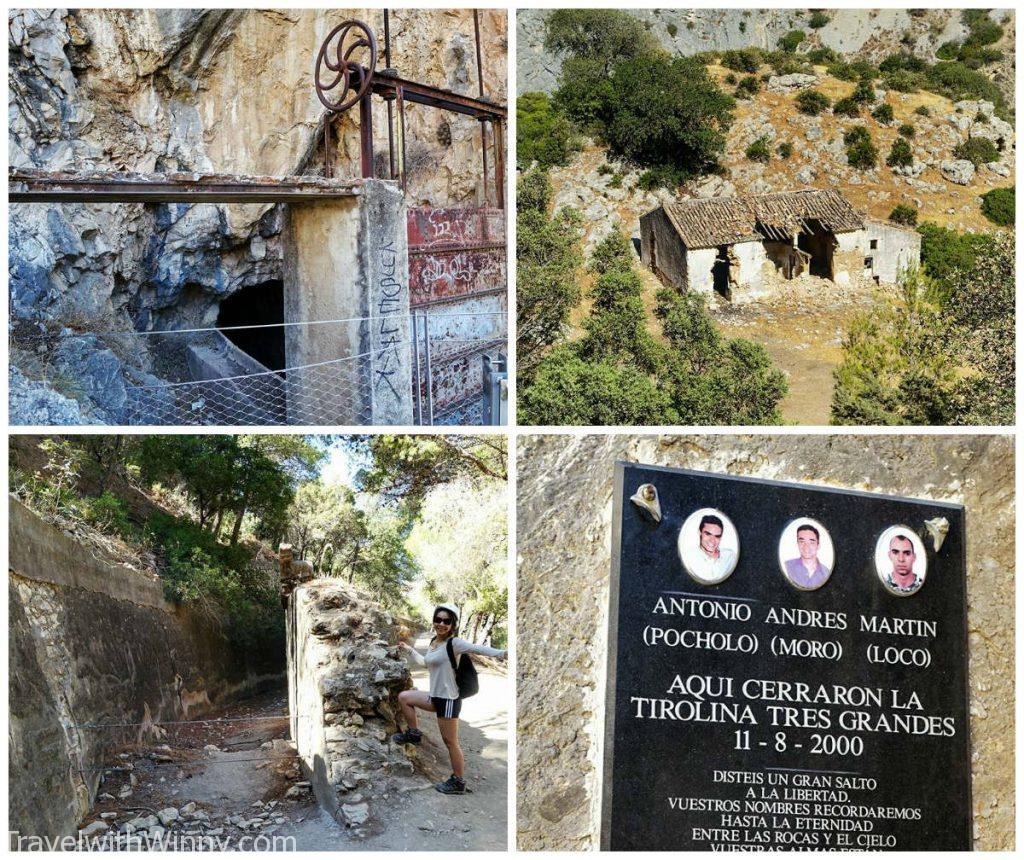 Throughout the path, we could see ruins left from the old pathway. There was also a plaque to remember the three adventurers who died in year 2000.

The final part of the trail was even more thrilling with the walkway pinned even higher than before. The view was stunning here but the walkway was even more impressive to look at. The old trail could be seen here located directly below the new trail and it was clearly breaking apart with bits of the concrete planks missing. We could now understand how people lose their lives on this trail. 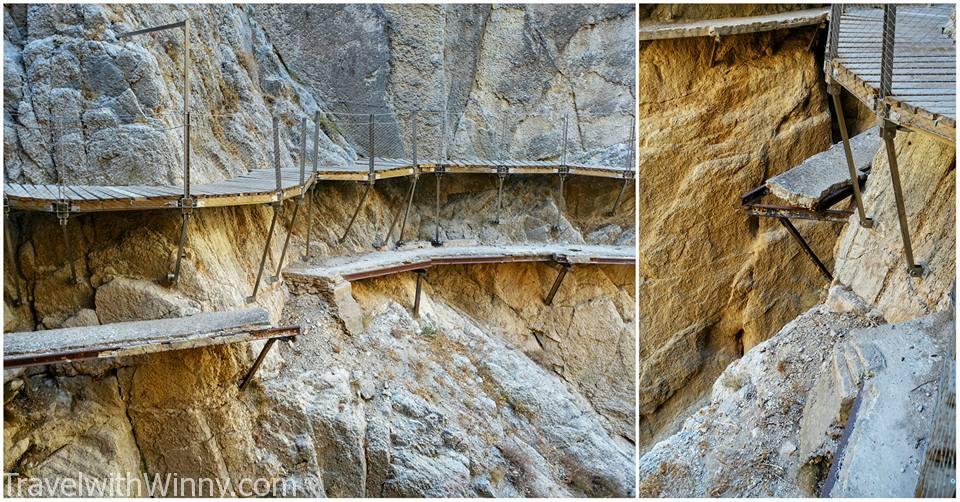 Sections of the old pathway had completely broken off. In the past, people would have to leap from one side to another.

It’s hard to understand why people would risk their lives to complete such a difficult and dangerous path. The route curves around a bend at one point and it was interesting seeing how the new and old pathway were built at this point.

For someone who is afraid of heights, Winny’s mum tacked this part of the trail quite well. There was a lot of comfort and reassurance from Winny’s dad during this section of the path! 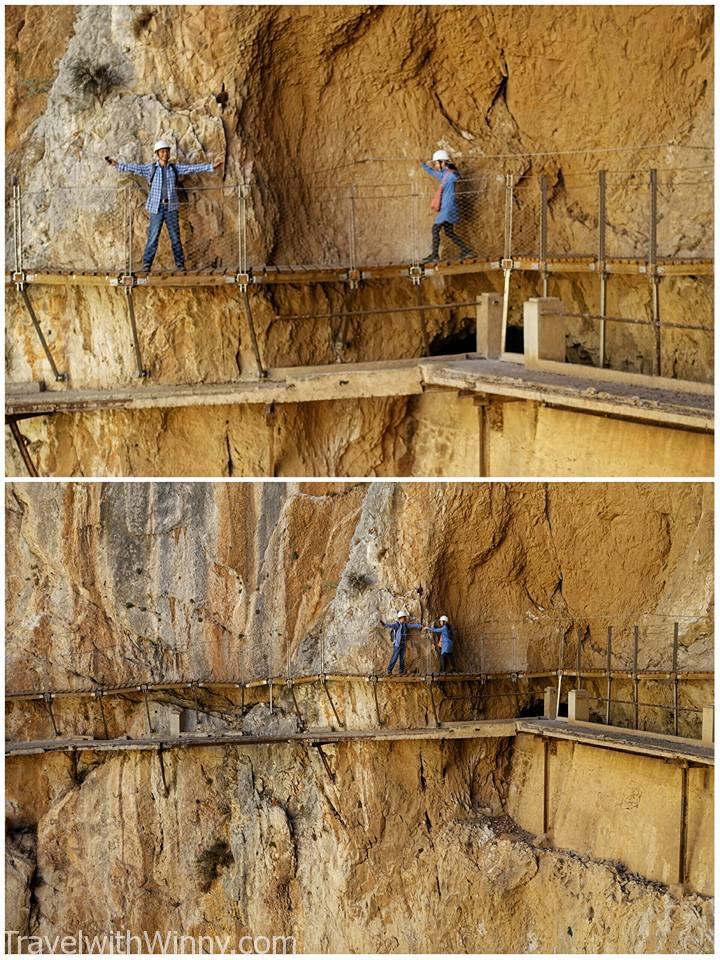 It was a scary experience looking down from these walkways as we were quite high off the ground.

The finale of Caminito del Rey was the long suspension bridge between the gorge. It was built extremely high off the ground and you can see clearly through the walkway. The experience was quite thrilling and the scenery was extremely beautiful. 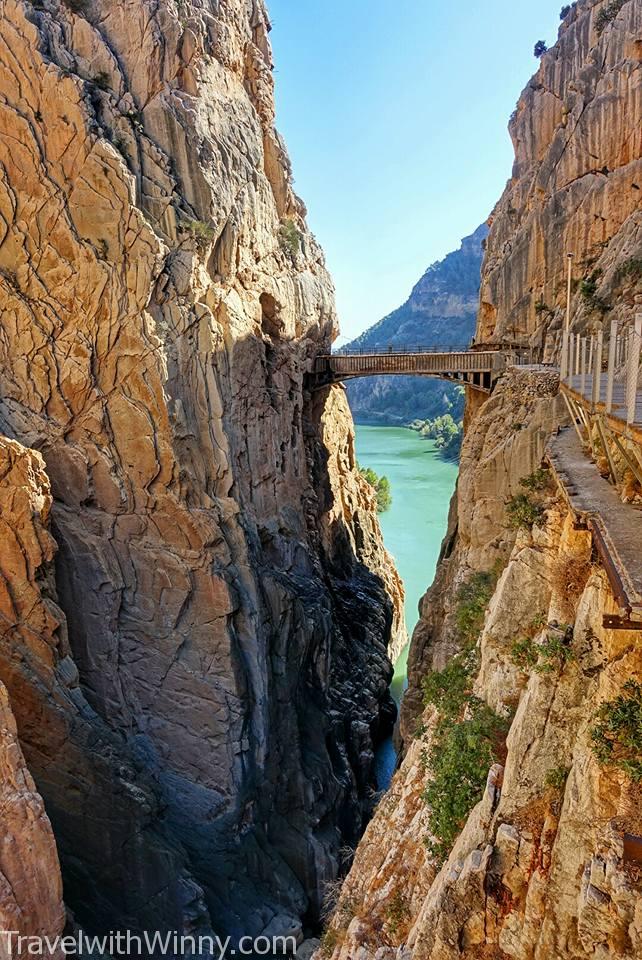 The most epic and scenic section of Caminito del Rey. A bridge that suspends high above the valley.

It was a place we could stay and take pictures all day. Luckily at that point, there were not many people around and we could enjoy this place properly. We had the secluded feeling in this beautiful landscape. 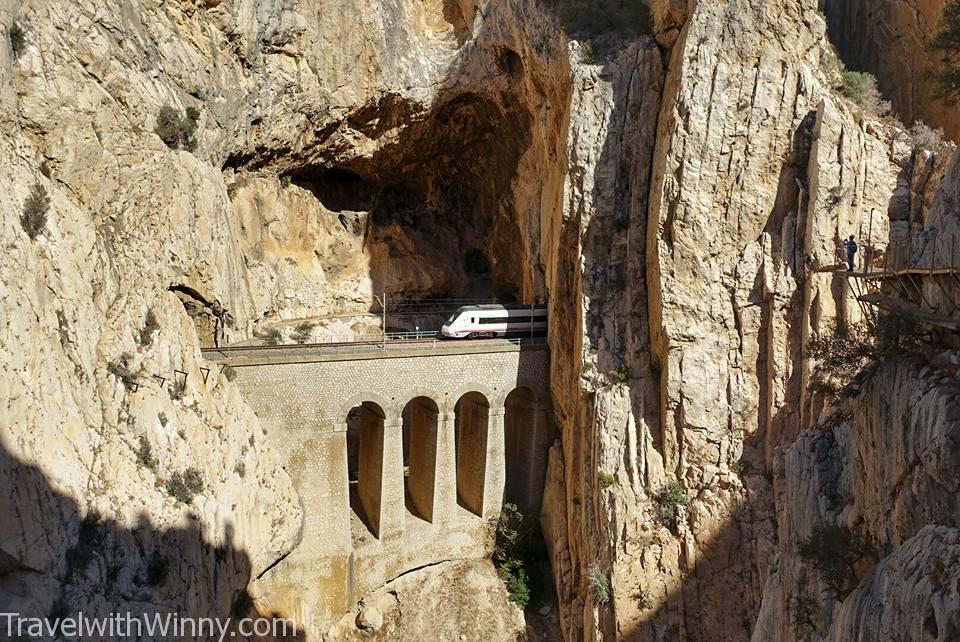 There was a railway track on the other side of the valley at one point. Luckily we get to see a train coming out of the tunnel.

After the suspension bridge, we had a long grueling walk back up to the exit of the trail. There wasn’t anyone guarding the exit and there were two huge crates here for us to put down our helmets. We had to walk for another 20 minutes before we found the bus that could take us to the beginning of the trail. It costs 2 Euros per person for this ride which could be bought in advance with our tickets online. 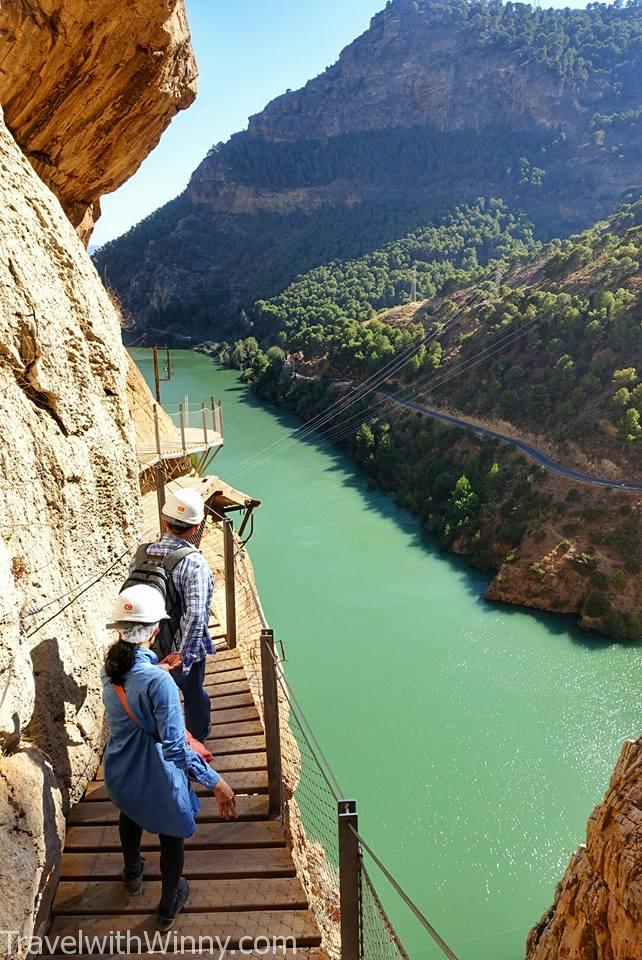 After the suspension bridge was a long walk down.

We thoroughly enjoyed our hike Caminito del Rey and it was definitely a change from our daily itinerary of churches and old towns in Spain. Besides being a very scenic route, it was a route full of history and ruins. If you want to hike Caminito del Rey, I highly recommend that you need to book online at least a month in advance. Click here for the website! 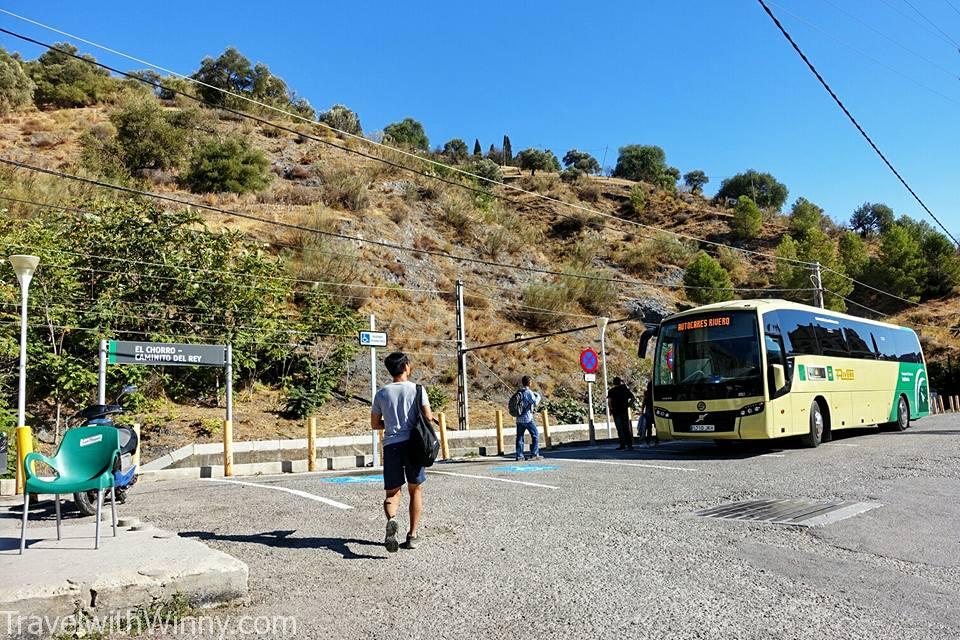 Luckily they offer bus services that can take us back to the start of the track.