Macau- the Las Vegas of the East, is a small autonomous territory with Sino-Portuguese heritage. It’s hard to plan a short Macau itinerary as there are so much to do. Macau is made up of four districts; the Macau peninsula on mainland China, the island connecting to it is Taipa, the most southern island Coloane and a strip of reclaimed land- Cotai connecting the two.

Gambling is legal in Macau and has allowed the place to evolve into a maze of five-star casinos and resorts. It is one of the best party destinations in the world and the nightlife in Macau is spectacular. On the other hand, Macau has a fascinating heritage being once a Portuguese colony. 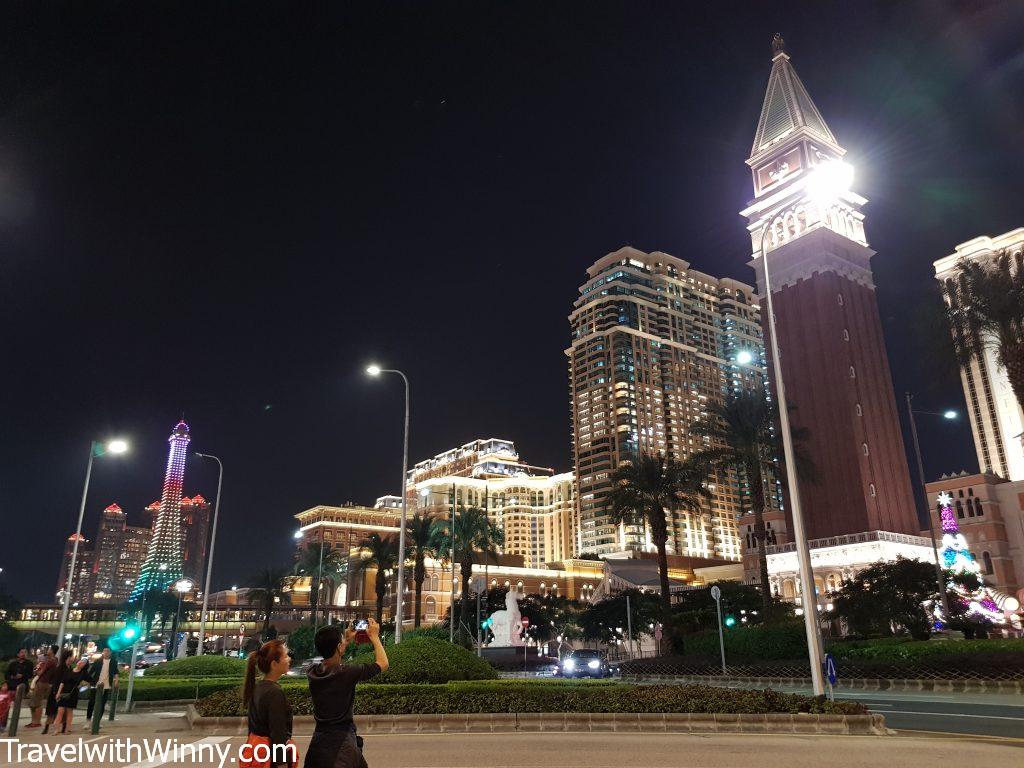 We spent 4D3N in Macau with a tightly packed schedule. We saw the historical sites of Macau and visited all the futuristic casinos that have gathered in its Vegas-like strip. Macau is also famous for its food, we dined at some of the best restaurants Macau can offer. The following is our 4D3N Macau itinerary. 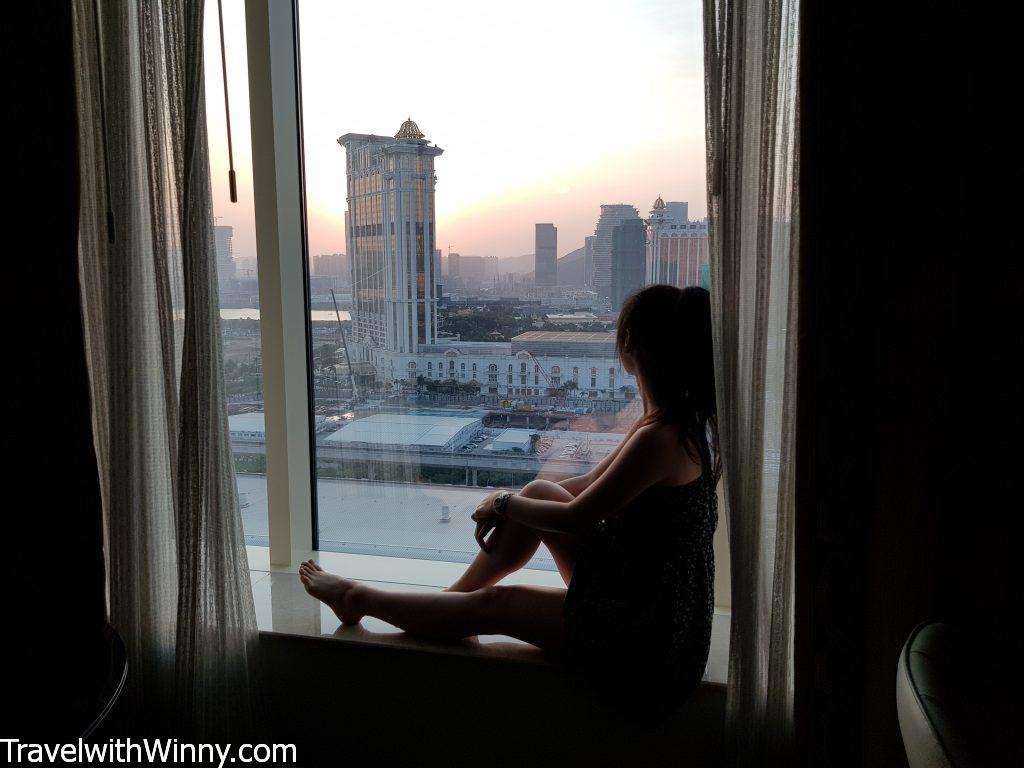 View from the Venetian hotel room 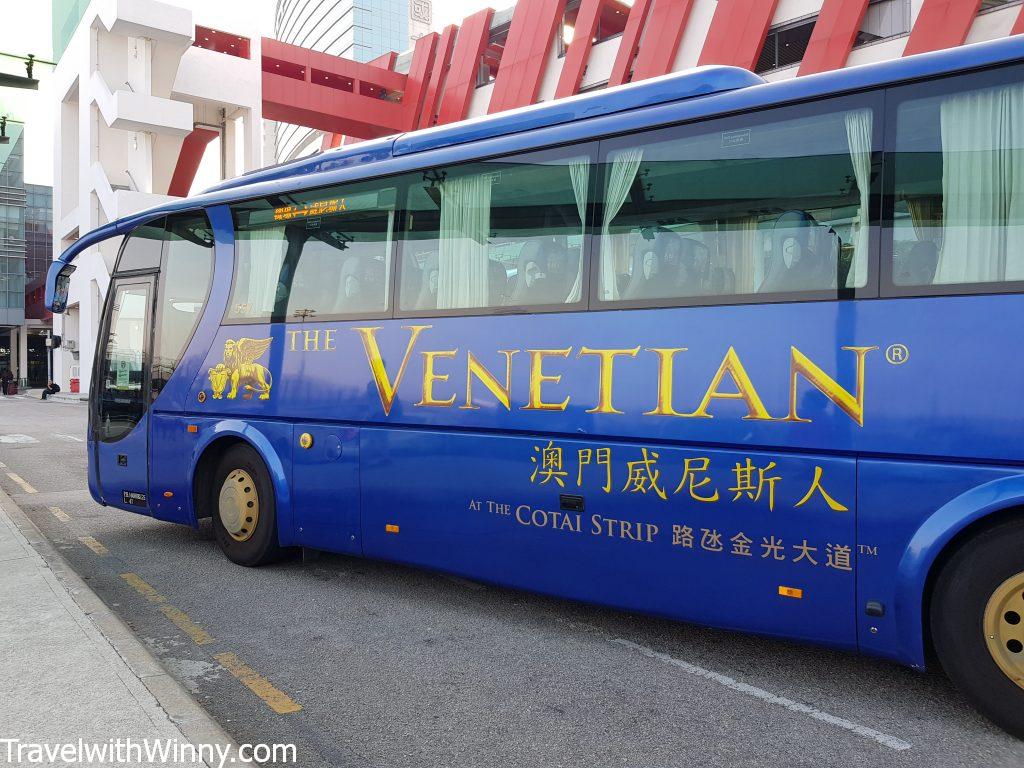 The Venetian is on the Coati Strip and is a must-see destination, even if you are not into gambling. It’s a mega building with Venetian streets and water canals built inside of the casino and the ceiling even turns from day tonight. We booked our rooms via Booking.com as it was cheaper. 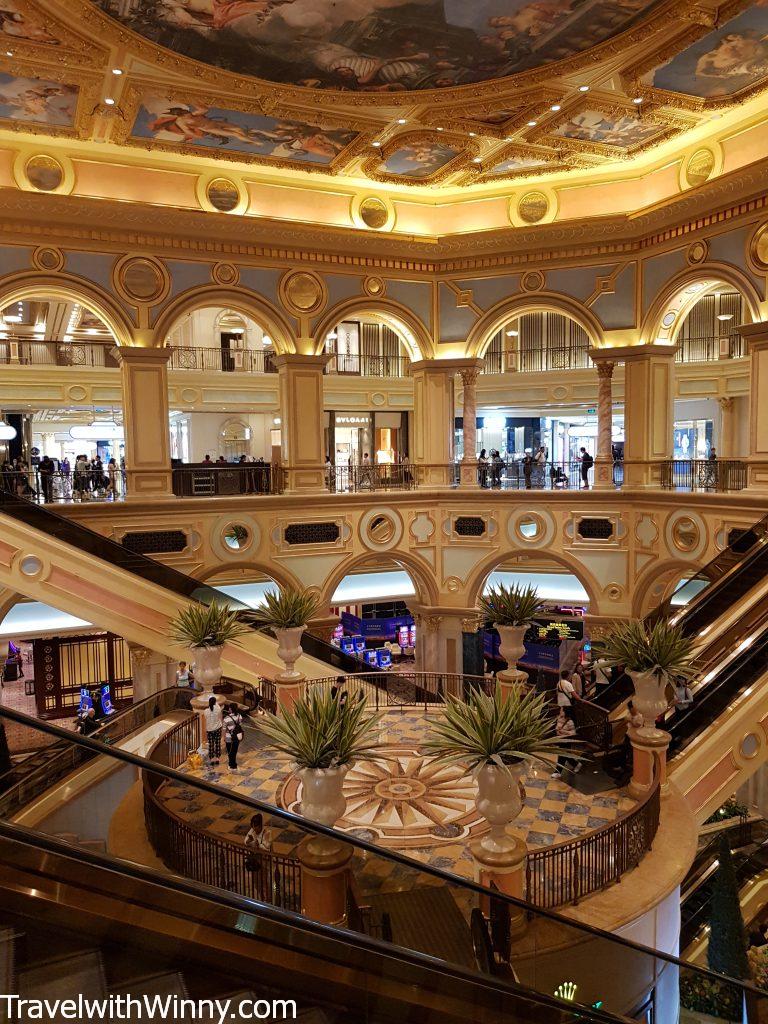 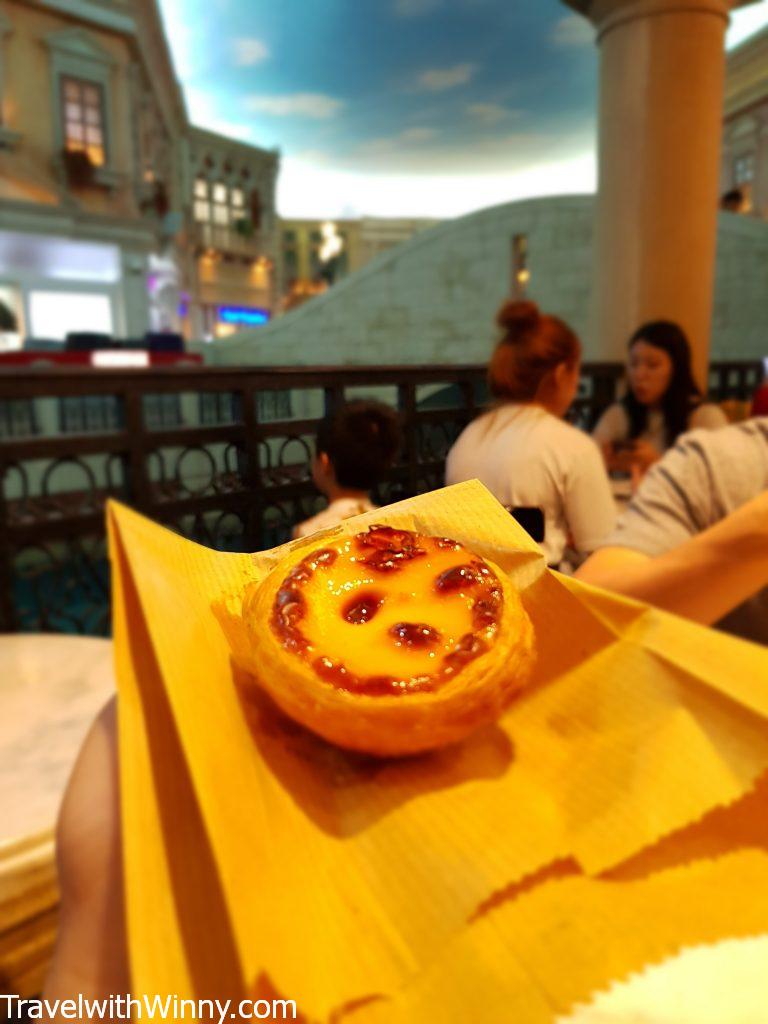 We walked to the opposite casino- the City of Dreams and explored the casino a bit before having dinner at Jade Dragon at 7:30 pm. 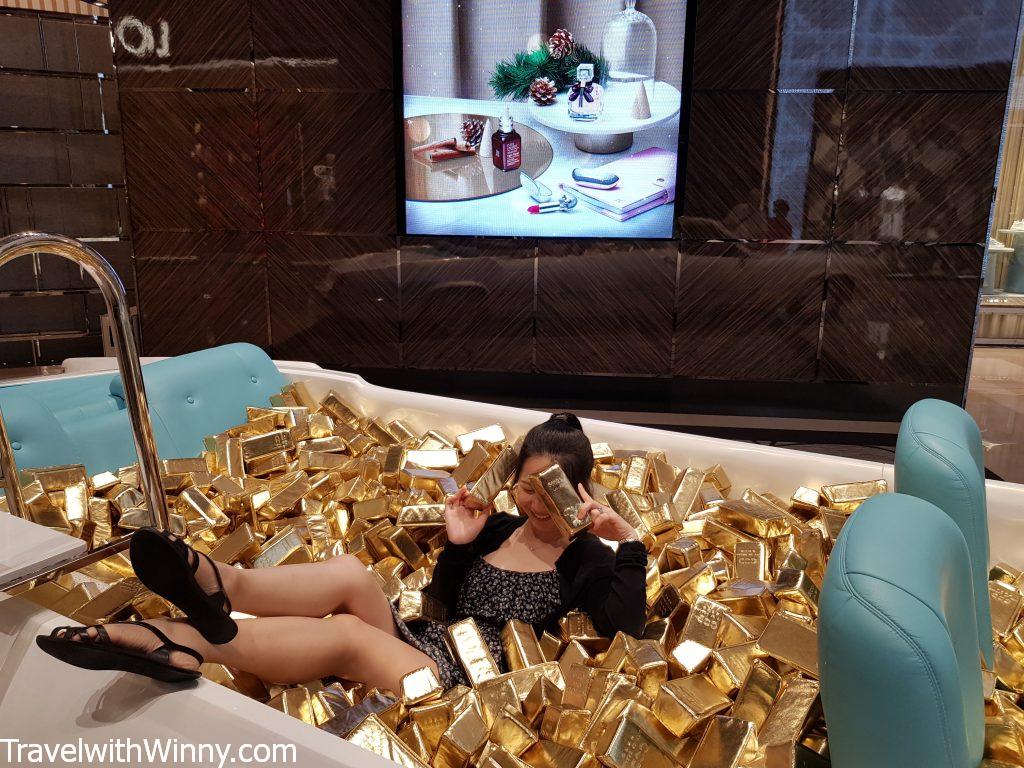 Plenty of places for photos and make you look rich. Inside City of Dreams.

Jade Dragon is a three-starred Chinese restaurant decorated with ebony, crystal and gold to create a lavish and contemporary feel. The food showcases exquisite culinary masterpieces created with fresh seasonal ingredients. We booked in advance and reserved a Lychee wood roast Peking goose which was to die for.

Our waitress spoke to us professionally but made us felt extremely homely. All the food were delicious and served in plates and cutleries that made us feel like Chinese royalty. A piece of Chinese calligraphy of our food order was gifted to us as a souvenir at the end of the night. 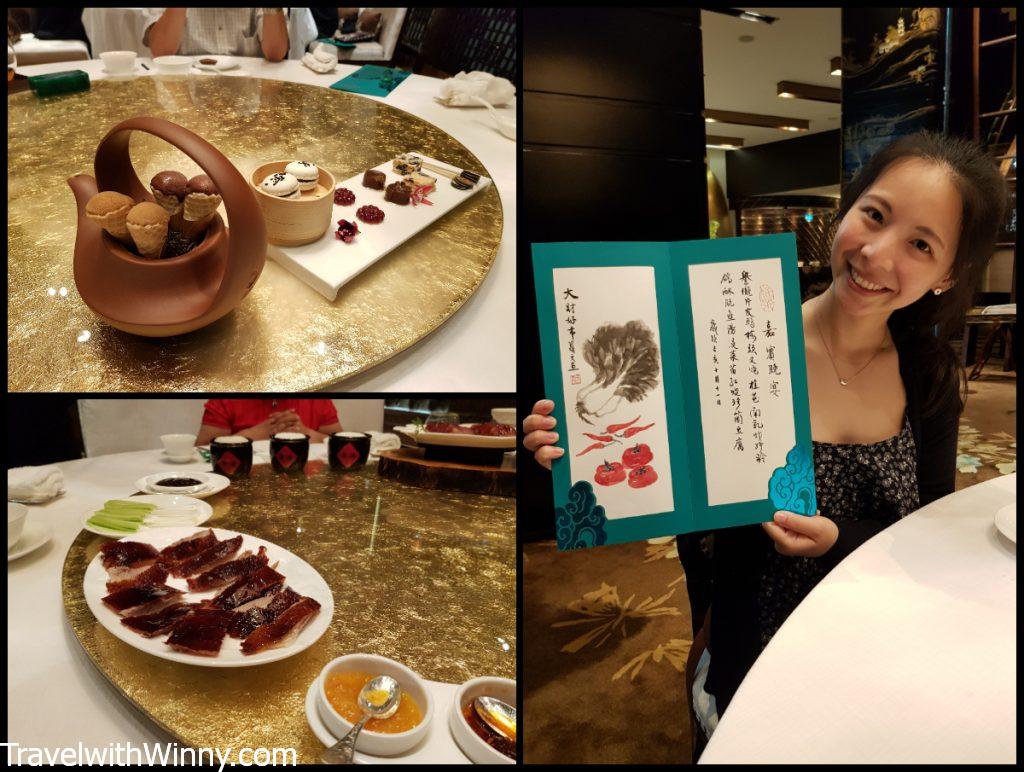 There are free shuttles that take you from different hotels to the old town, but to save time we took a taxi and started our visit to the old town at Senado Square. You can usually find the shuttle timetable on the hotel website, but I find this page particularly useful, as you don’t have to stay in that particular hotel to use the transfer. 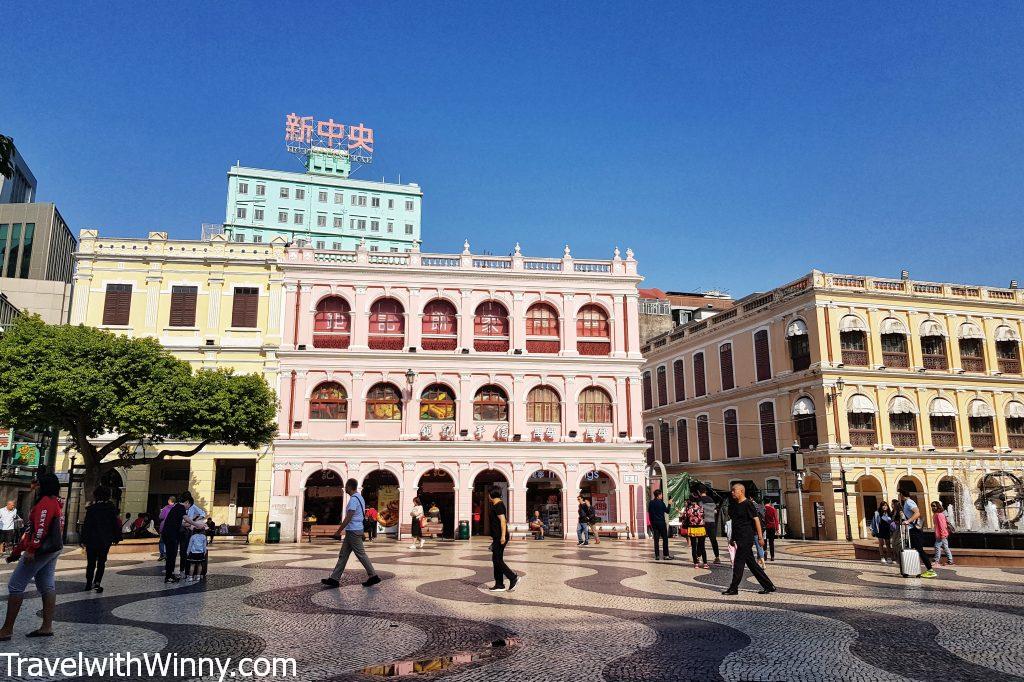 Senado Square used to be the city centre. European style houses with many shops.

Senado Square is a UNESCO Historic centre with the building around the square built in European style.  The square served as a meeting place for the Chinese and the Portuguese in the 16th to 18th centuries. Now, it’s a square where you can find a lot of shops and bakeries, it has many protected monuments 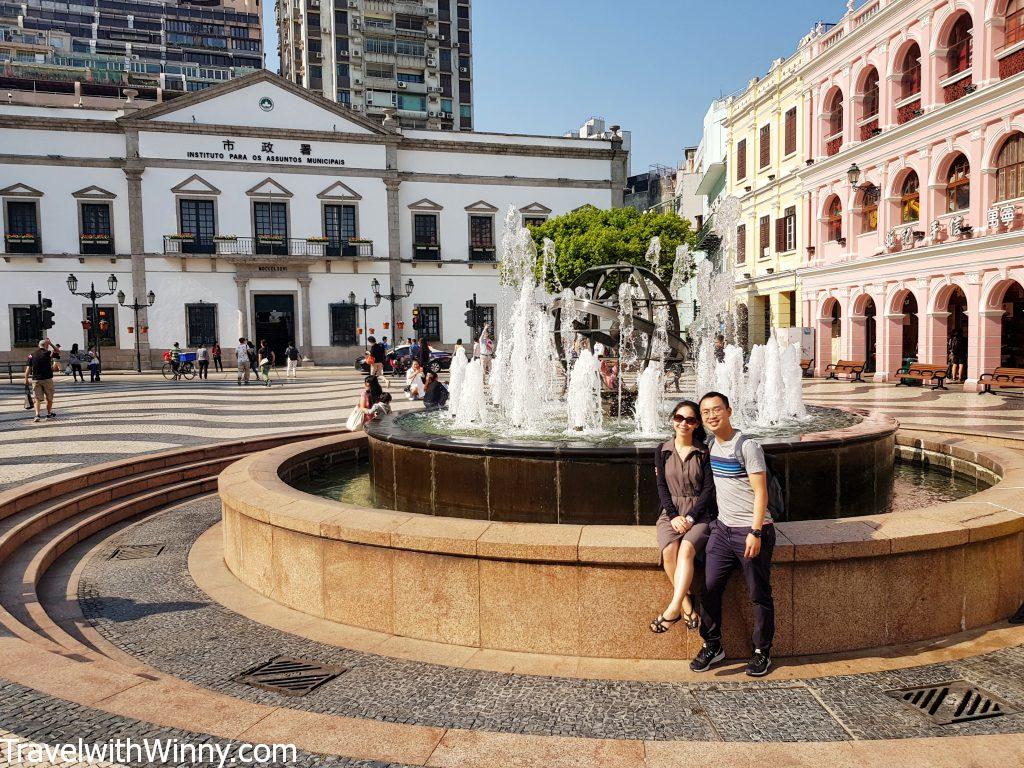 Senado Square is a nice place to relax and watch people walk by.

As it was early, we first head towards the most popular destination in Macau, Ruins of St. Paul’s. The church was one of the largest catholic churches in Asia built by the Jesuits in 1602 to 1604, but it was destroyed by a fire during a typhoon in 1835.  A huge façad is all that remains from the church and is the main attraction in the old town of Macau. The place was restored by the Macau government and turned into a museum. 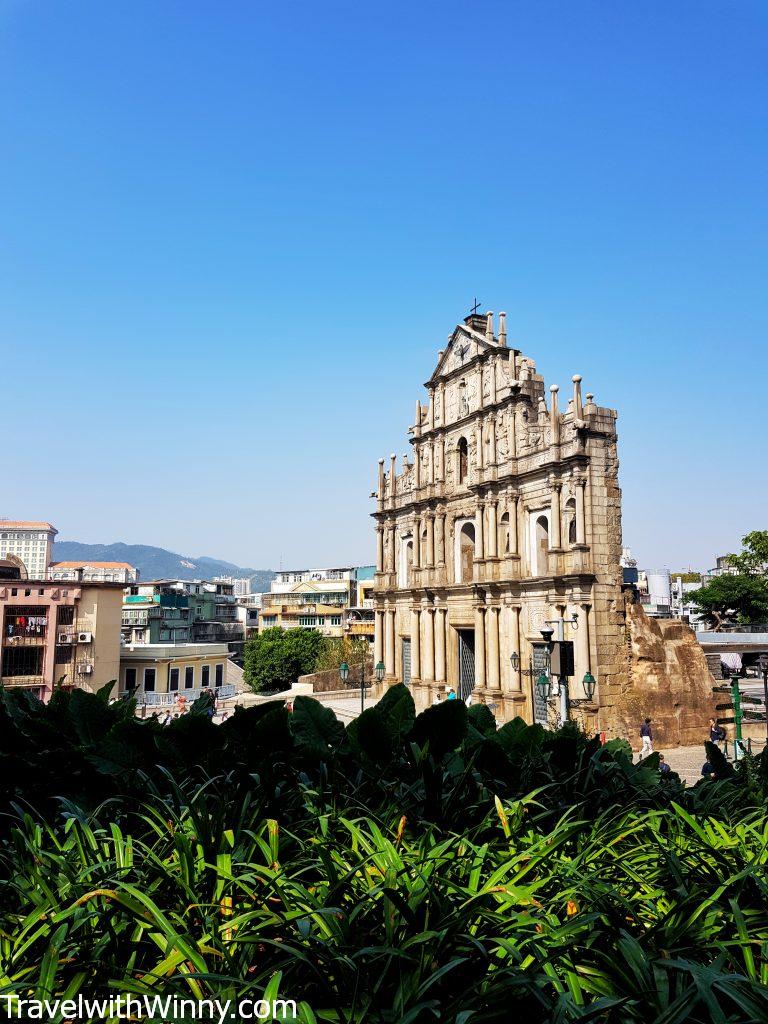 Ruins of St. Paul’s is quite pretty but can get quite crowded with people in the afternoon.

From the Ruins of St. Paul’s, you can walk straight down to Travessa da Paixão or “lover’s lane”. It’s a 50M cobblestone street with cute European style buildings that’s been around for 80 years. It’s a place where tourists like to take a photo like they were on a romantic street in Europe. 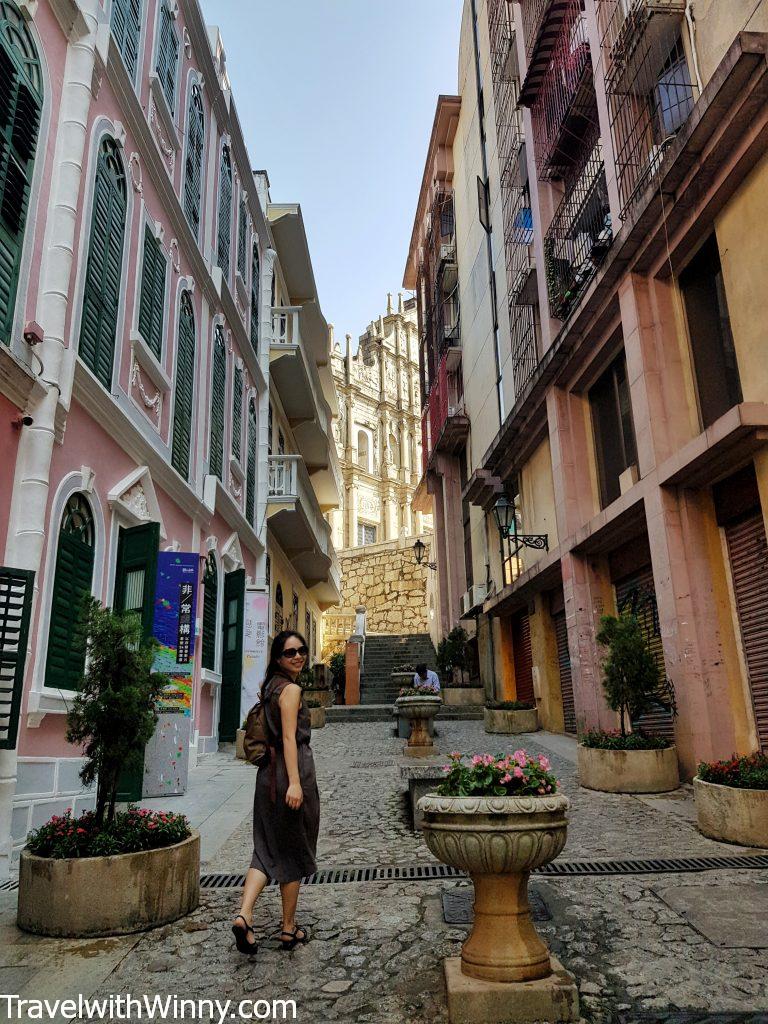 Lover’s Lane isn’t very special. It’s a good place for photos if there are not very many people.

Next to the Ruins of St. Paul’s, we walked up to the Monte Fort, another UNESCO World Heritage Site, which has a superb view of the old town. The forte is a historical military centre of Macao and was built between 1617 to 1626. It was mainly built to protect the properties of the Jesuits. Macau Museum was there too. 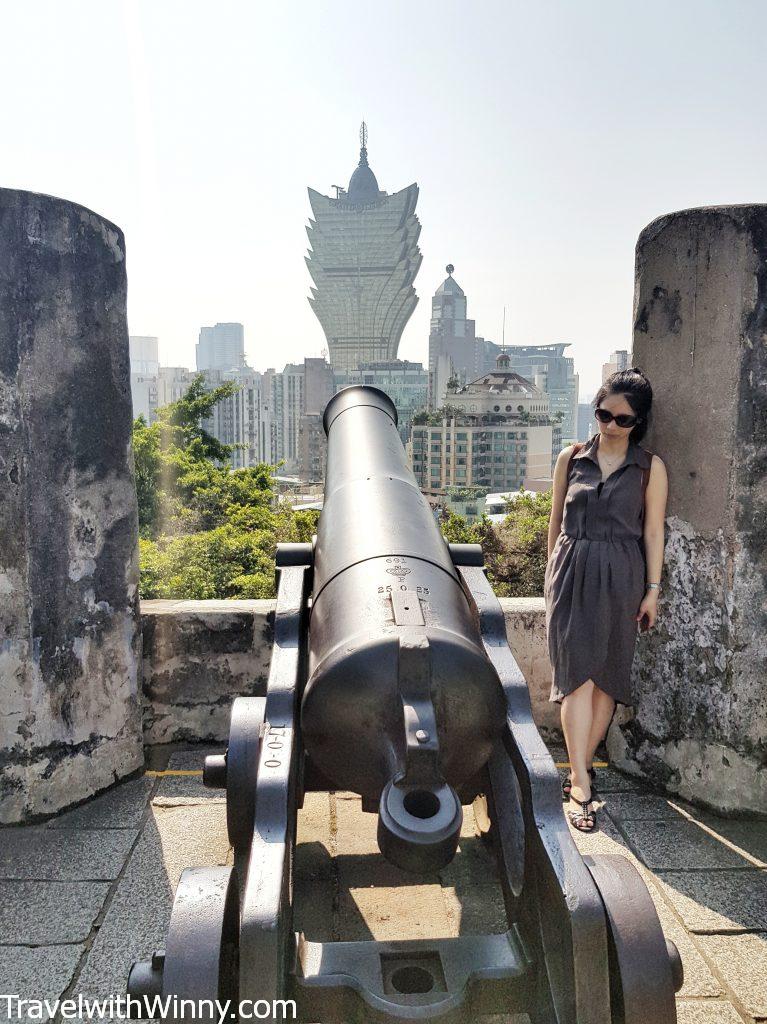 Monte Fort is a good lookout point. Quite a few stairs to get up to the top of the forte though.

From there, we slowly walked to our restaurant for lunch which is at the hotel Grand Lisboa 12:00pm. 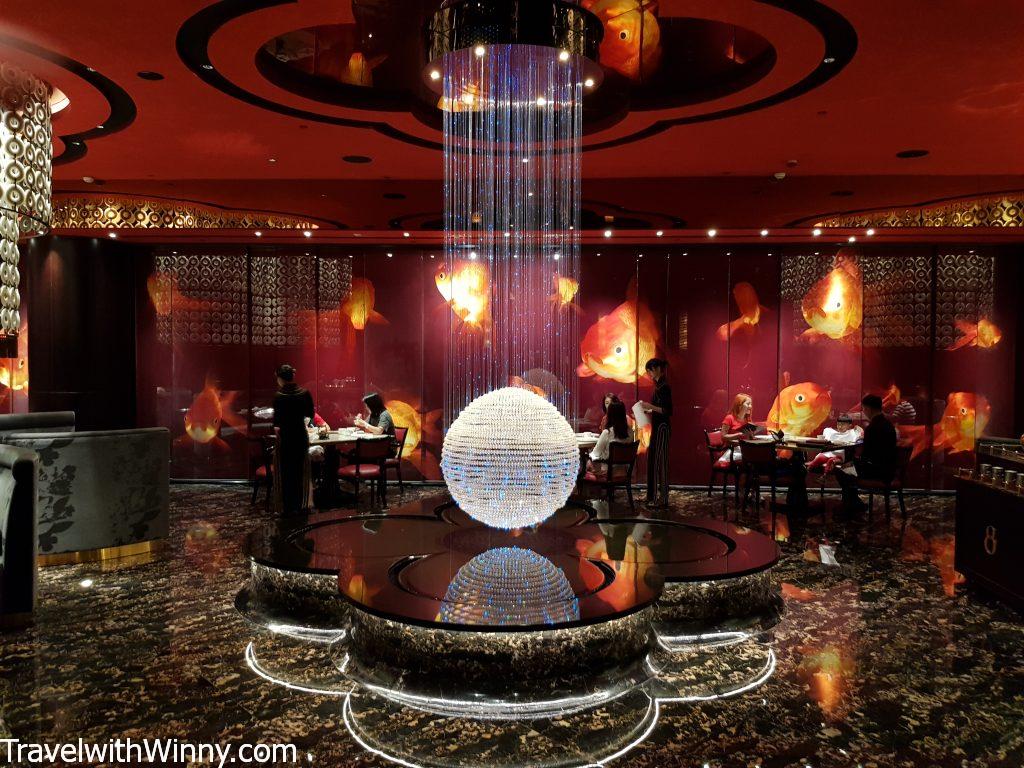 The 8 Restaurant looks like a classy underground mafia society. It got a very glamorous look!

The 8 Restaurant is a 3 star Michelin restaurant that serves Yum Cha for lunch. The inside was decorated lavishly with traditional Chinese elements of goldfish and the number eight which signifies good fortune. 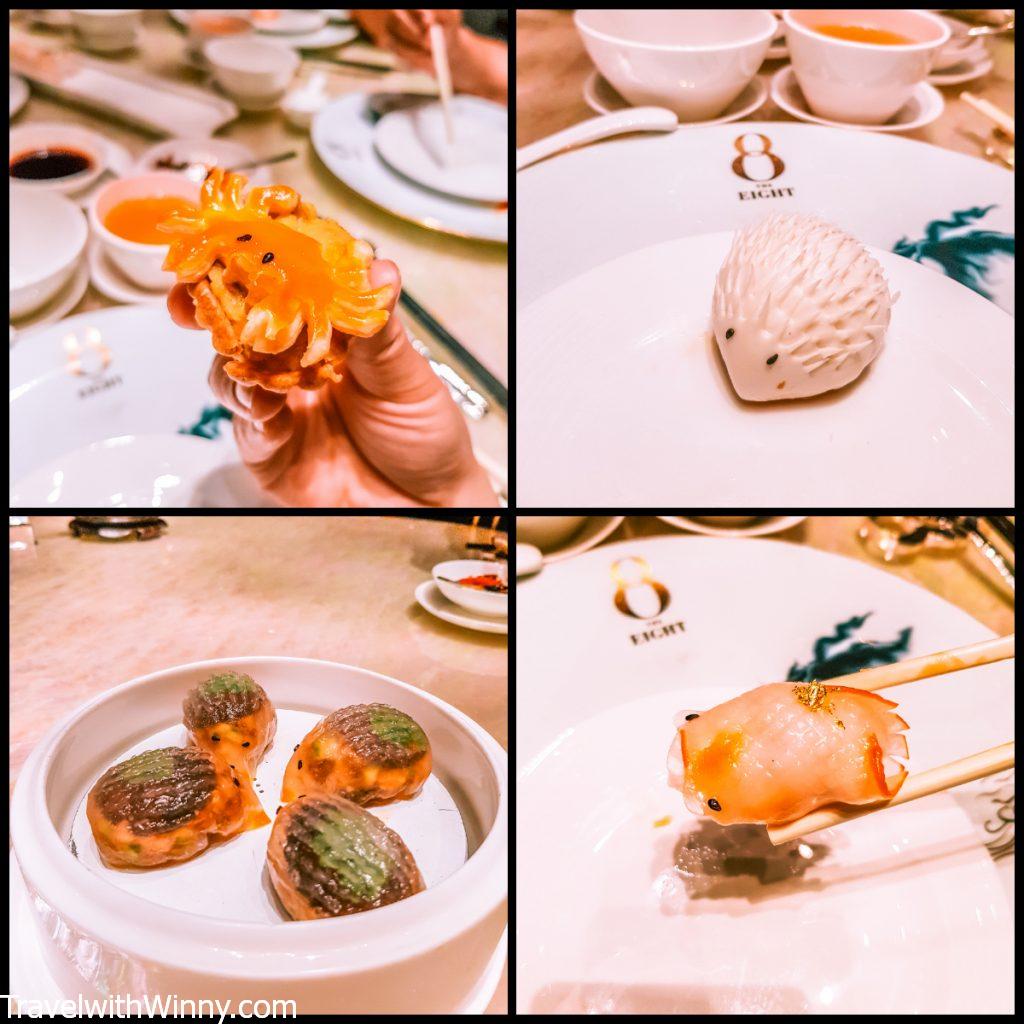 The yum cha at The 8 Restaurant.

The waitresses were wearing an elegant dark qipao dress. All the yum cha dishes were decorated or shaped in an animal form. Food was extremely delicious. 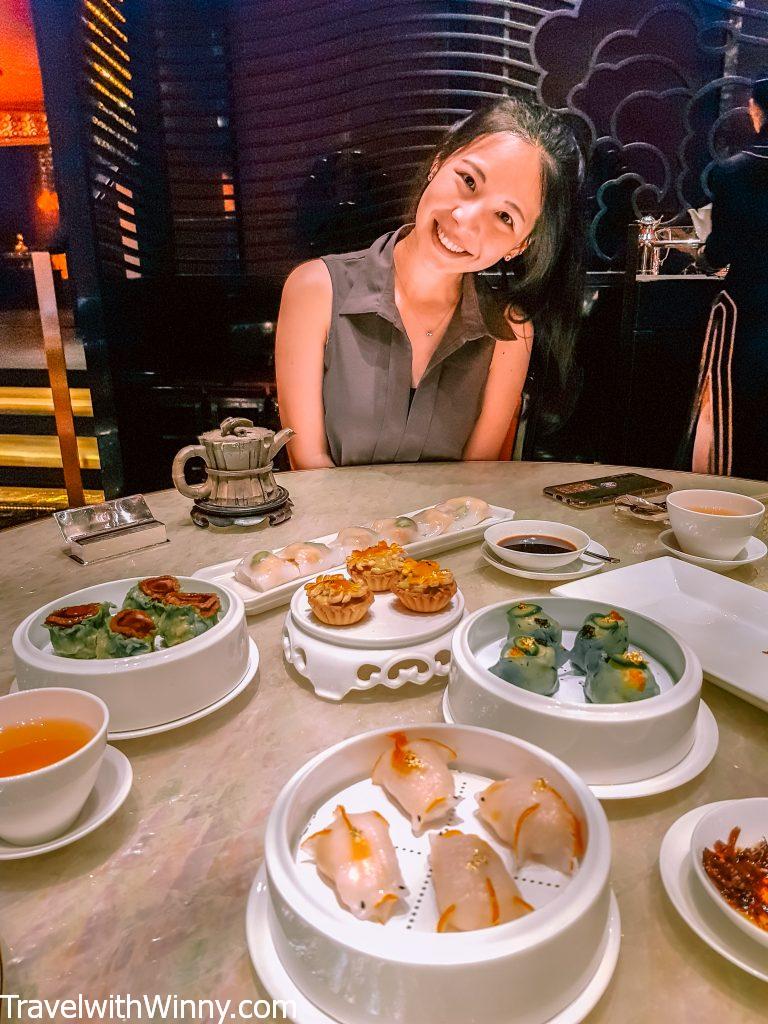 We asked the waiter to recommend every yum chas that looks cute.

After lunch, we visited Macau Fisherman’s Wharf. Much of the wharf was decorated in a Roman-style with an Amphitheater built near the entrance as a stage. The Wharf was designed as a huge shopping district, but not many tourists visit here. It was a little sad seeing a place becoming so deserted. 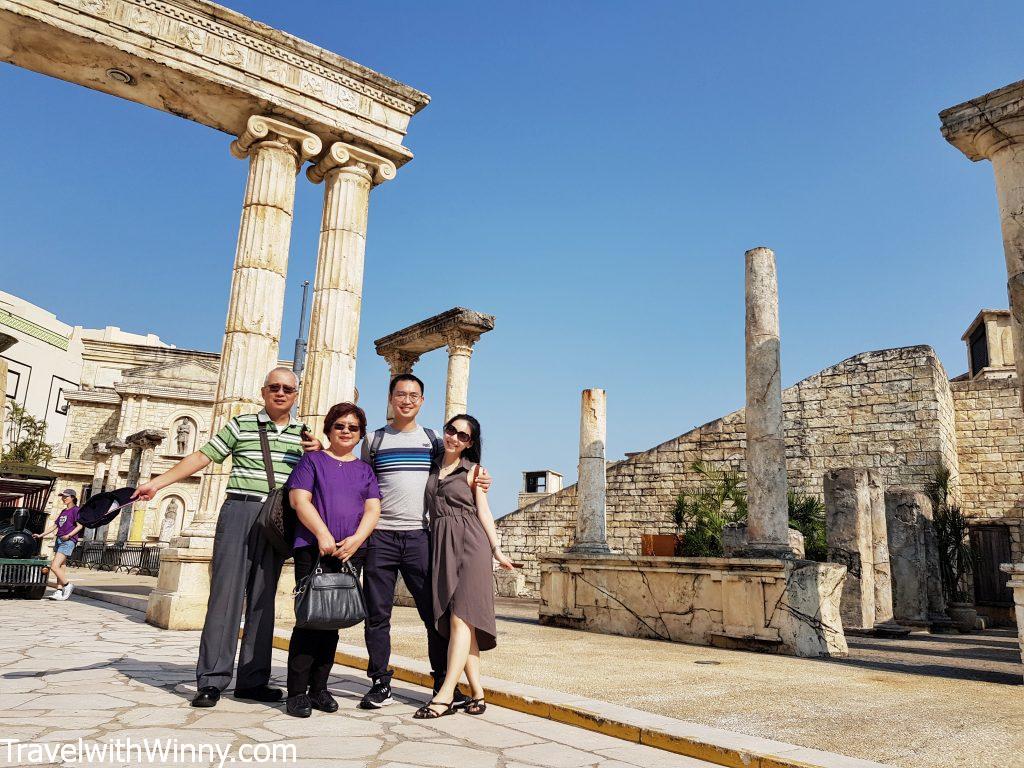 We went back to our hotel for a little rest before visiting The Parisian Hotel and the surrounding malls with different themes. 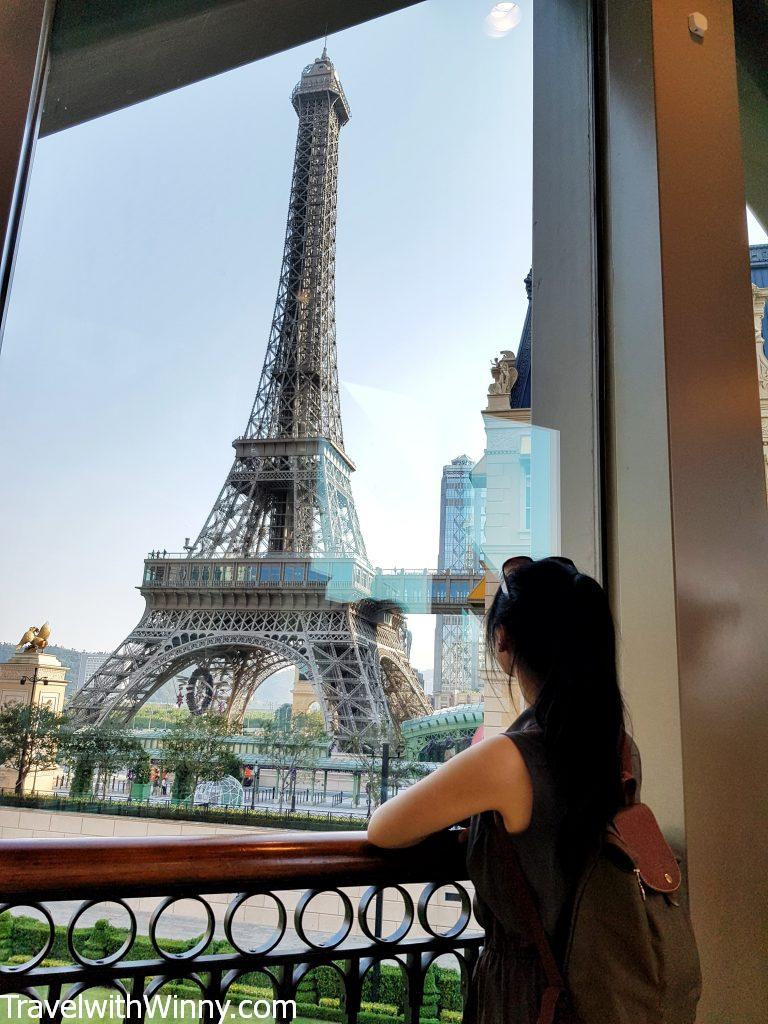 At night we watched the House of Dancing Water 水舞間 show at 7:30 pm. It’s a classic water theatre show that many have come to Macau to see. It was a very visually pleasing show. The performers, lighting, sound effects and storyline were excellent. We bought the tickets in advance to secure a good seat for a good price. The tickets are cheaper when booked through Klook. 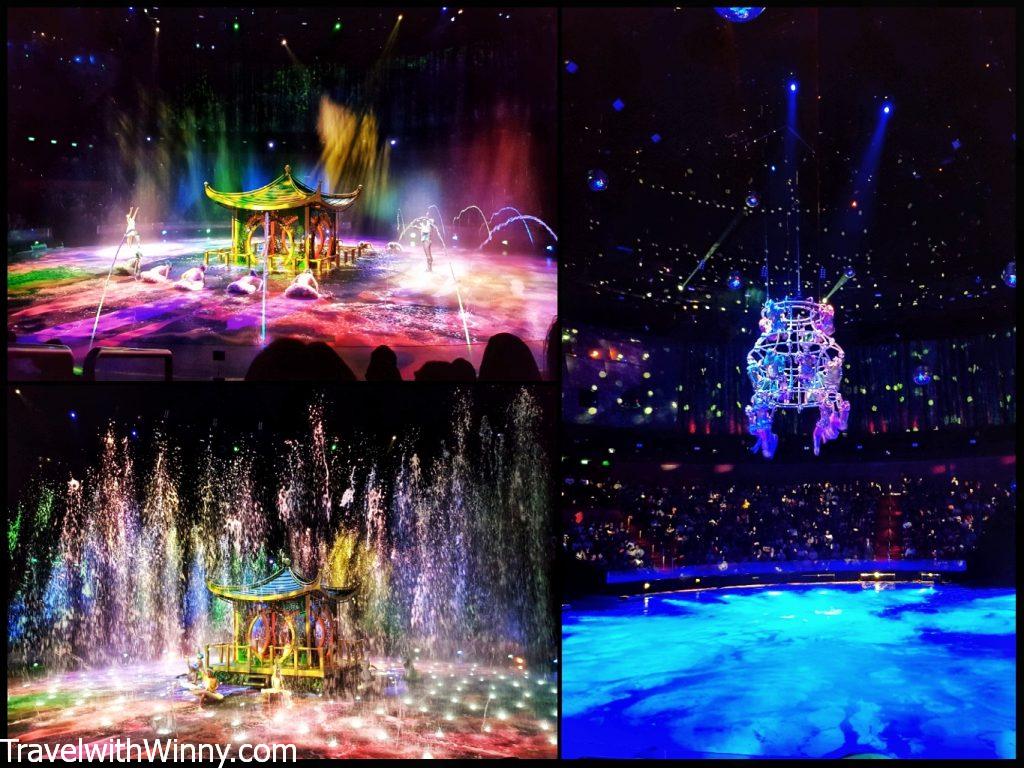 The house of the dancing show was spectacular. Book tickets early to get a good seat!

We enjoyed our morning in the Venetian hotel before checking out of our hotel and head towards the Macau tower. The Macau Tower has the highest bungy jumping in the world (338M)! As I have done the highest bridge bungee in South Africa, I was happy to do just the skywalk for the photo opportunities. 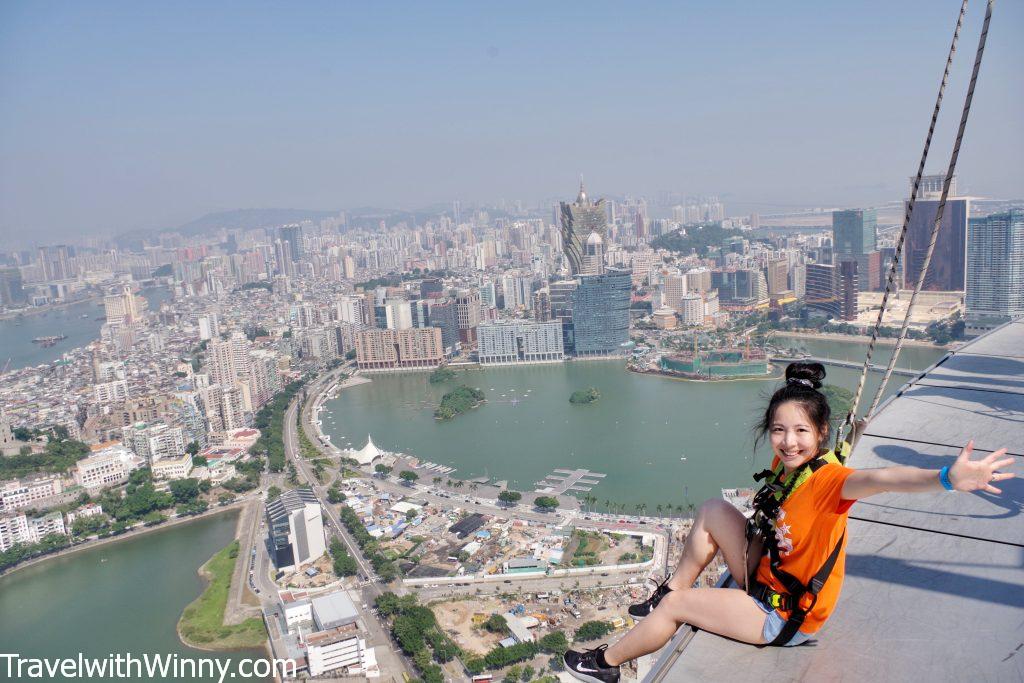 The skywalk was quite a good experience and a good place to see the whole view of Macau.

We pre-booked the skywalk for 11 am via Klook as it was cheaper. Photos were included as well as a free t-shirt and drinks/ snacks. The skywalk involves strolling on the outer perimeter of the tower at height of 233M with no handrails. We are securely fastened to a moving line directly above us. The view was superb. 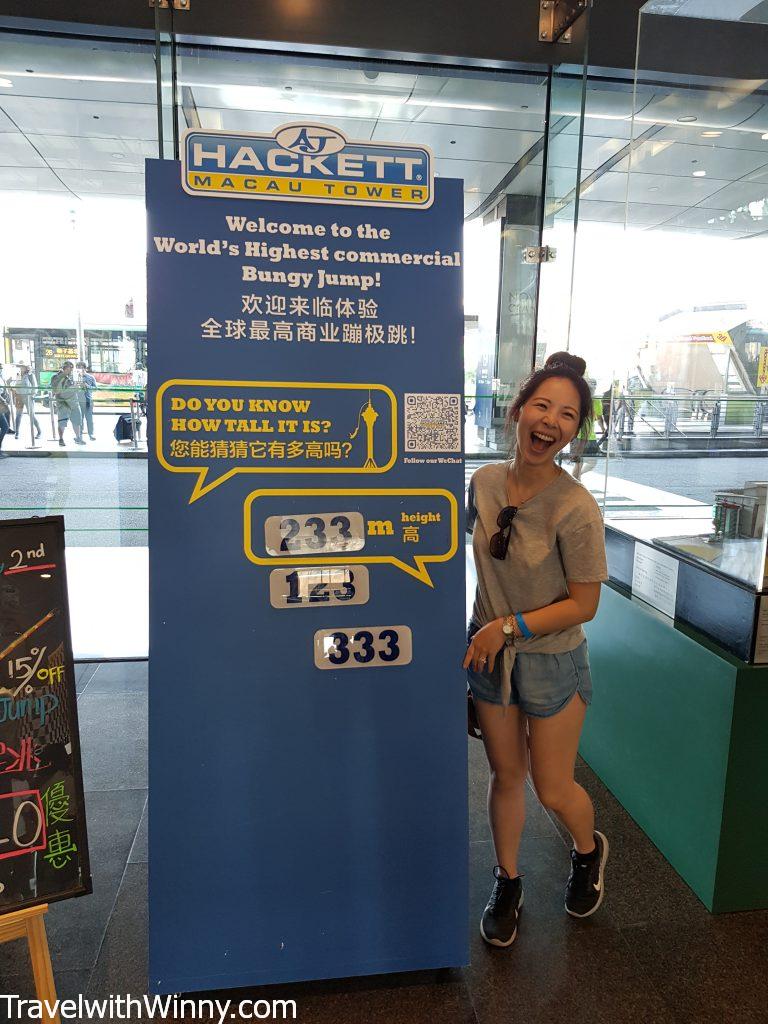 Chapel of Our Lady of Penha

We took a nice stroll from the sky tower to the old town. On our way, we went to see the Chapel of Our Lady of Penha, a church that was built in 1622. It has a great view of Macau Tower. 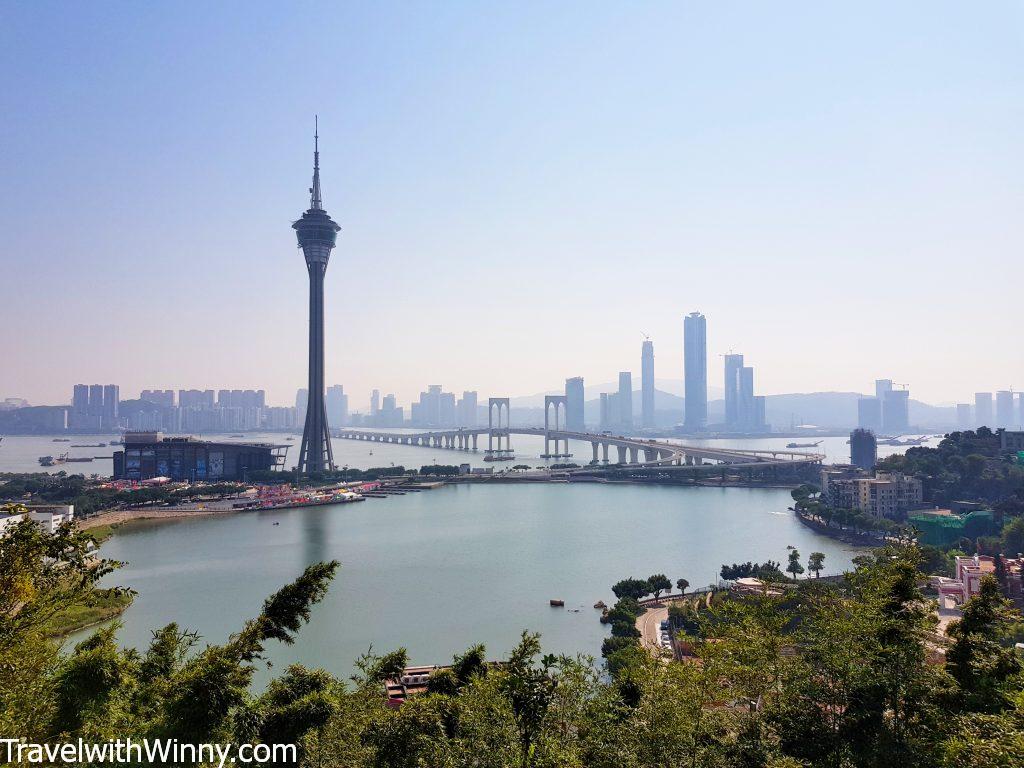 Chapel of Our Lady of Penha is a good viewpoint to see the sky tower,

At the old town, we ate the famous pork chop bun at Sei Kee Cafe . At first, we thought it was gimmicky and was annoyed that we had to wait for 30 minutes just to try the pork chop bun but the pork bun turned out to be amazingly good. The pork was juicy and the egg complemented the pork bun well. 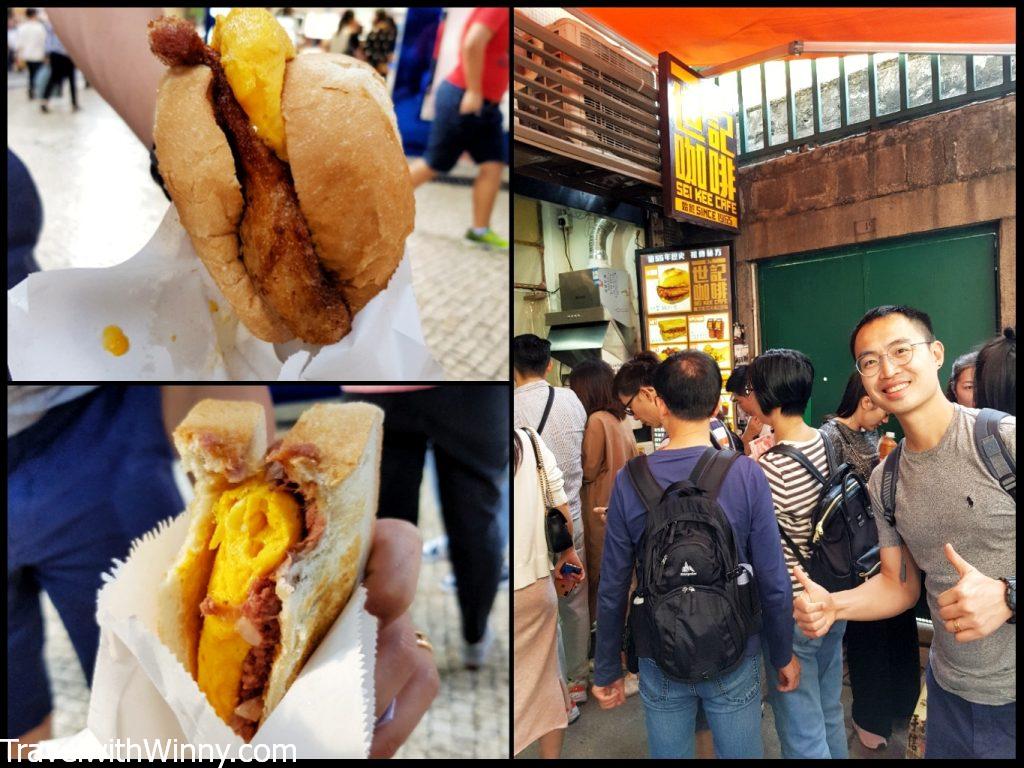 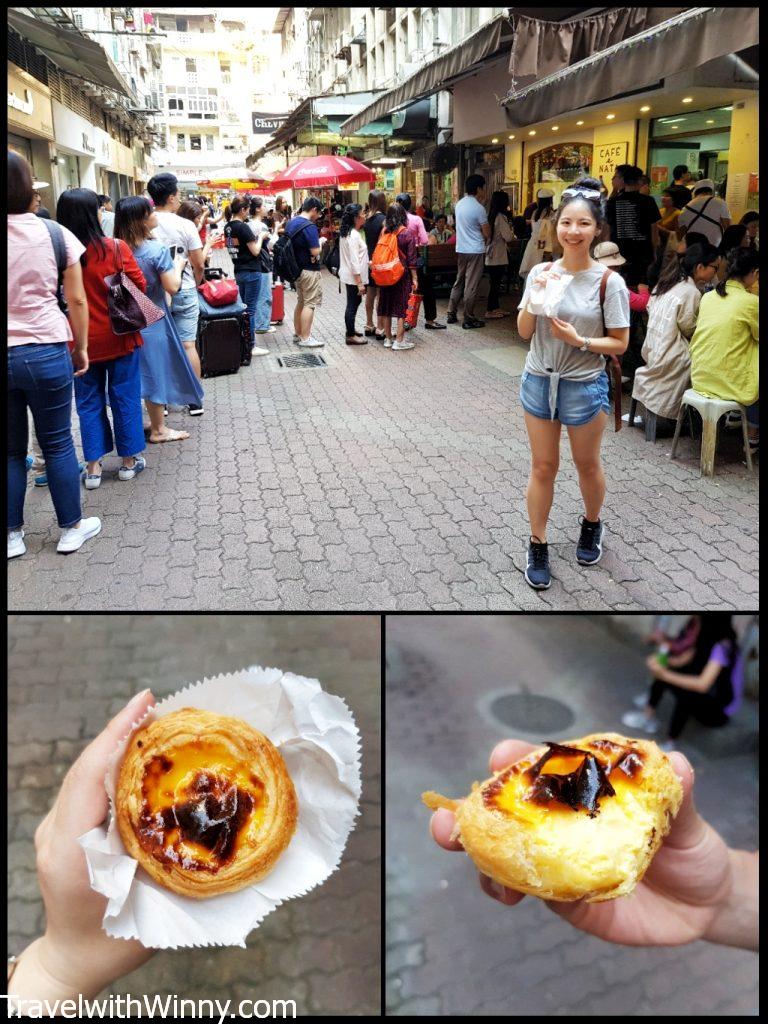 There was quite a long wait to but Margaret’s Nata. It was quite good but about the same as Lord Stow’s egg tart

Afterwards, we head back to Taipai island and took a walk around Rua do Cunha. It’s the town centre of Taipa which is full of shops selling phoenix egg rolls, almond cake and peanut candies. Rua do Cunha has an old Asian town feel with old narrow streets and it’s quite a relaxing place to stroll around. 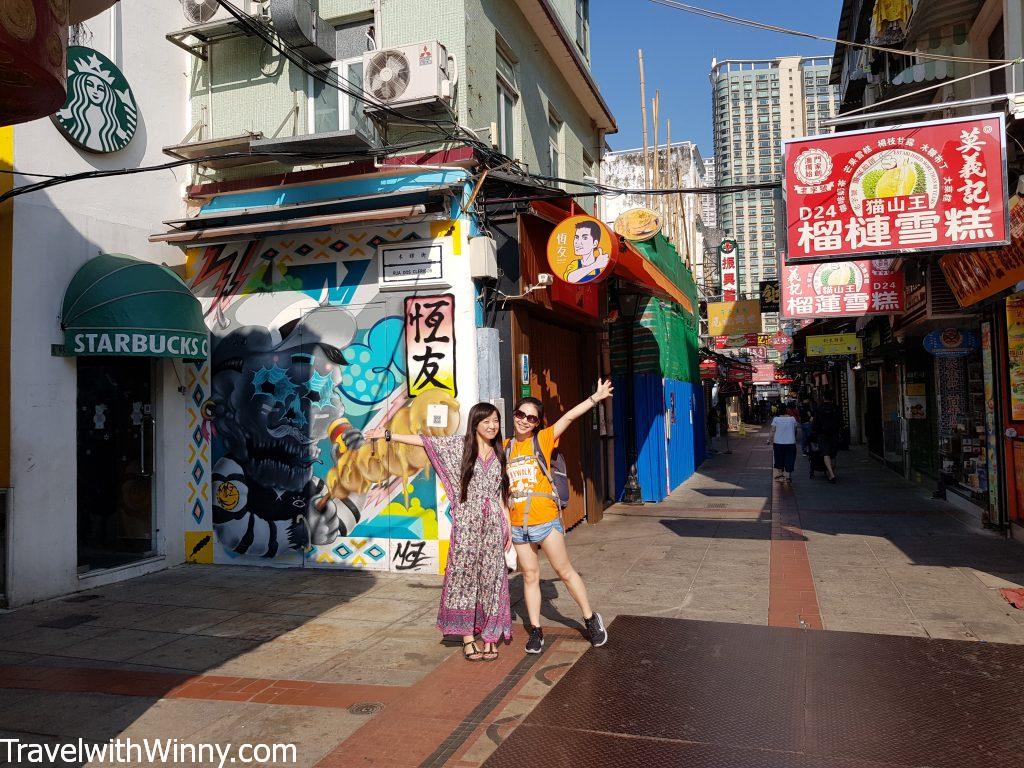 Rua do Cunha is a great place to walk around and find good street food. Prepare to line up for anything popular though.

That night, we stayed at the Grand View Hotel. It’s a cheaper hotel close to Rua do Cunha and the breakfast place we want to try in the morning.

We ate at the famous congee store Seng Kei Congee for breakfast before heading to the airport. Our flight was at 11:35 am flight back to Taiwan! 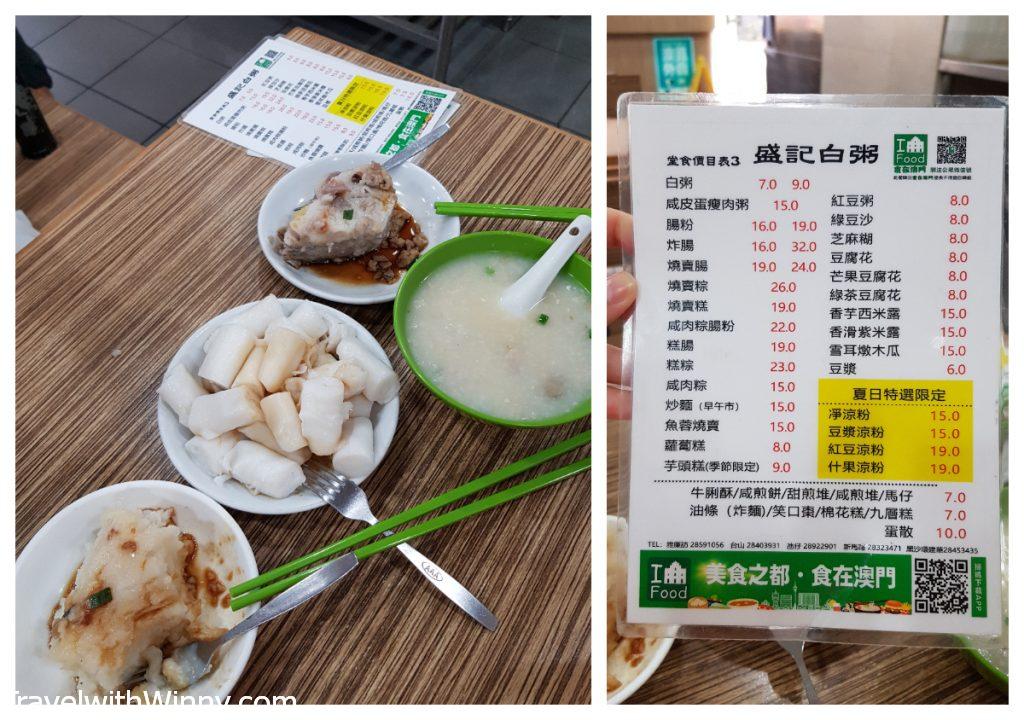 Hope you enjoyed our 4D3N Macau itinerary! Please don’t forget to follow us on IG @ travelwithwinny and see more of our travel stories! Or follow our Facebook page @ Travel with Winny.