Just as the reasons being unlimited fun and relaxation which makes a person book the Borneo Eco Tours, in the same way, the main reasons for tourists to travel Arequipa is to visit the world’s deepest canyon Cotahuasi Canyon (3354 meters deep) or the second deepest Canyon, Colca Canyon (3270 meters deep). Both of these canyons are more than twice as deep as the Grand Canyon in America. Many travelers come to Arequipa to hike the more accessible canyon, Colca Canyon but you could also see a lot by doing a Colca Canyon bus tour. 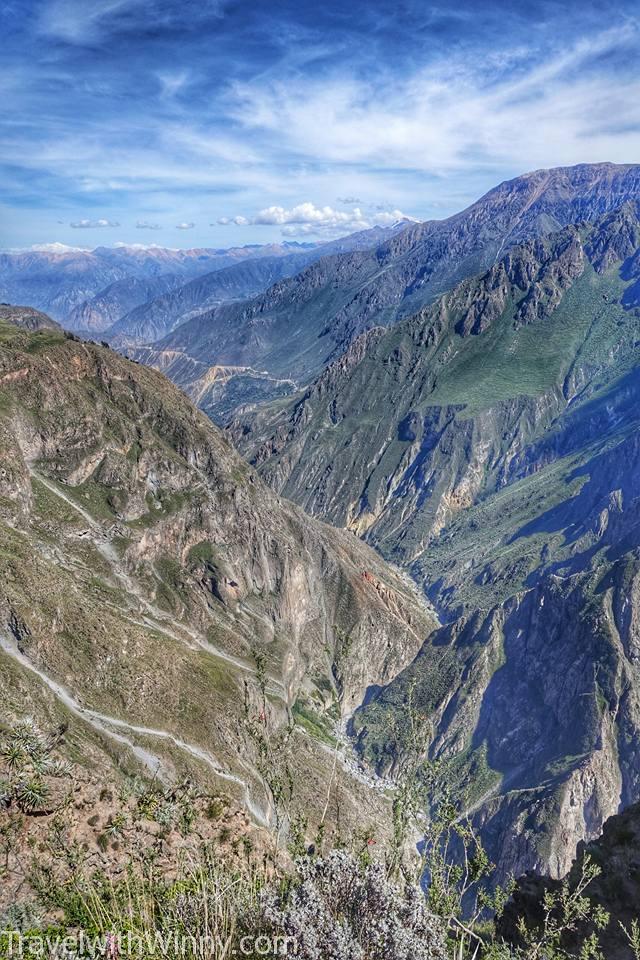 Many people didn’t know that Colca Canyon is twice as deep as the Grand Canyon!

At Arequipa, there are many companies selling the same itineraries to Colca Canyons with varying prices because of the different accommodations each companies offer. Beware that some local companies and online companies offer ridiculous prices that is double or triple the normal price so it’s good to compare a little. The following is the 4 main Itinerary available and the prices listed is according to our hostel at Mango Hostel. We did get a slight discount by staying at the hostel but use this as a guide to get the right price. We did our tour in April 2016. 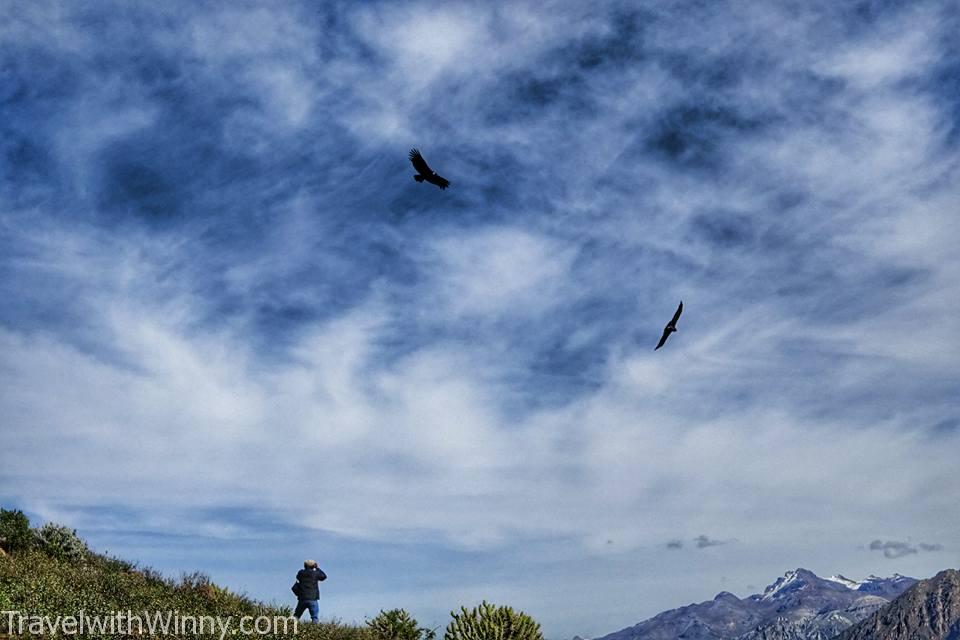 Condors watching is one of the main attraction at Cocla Canyon.

Itinerary of these bus tours are similar but the two-day one night is more relaxed and you can spend more time at each location. 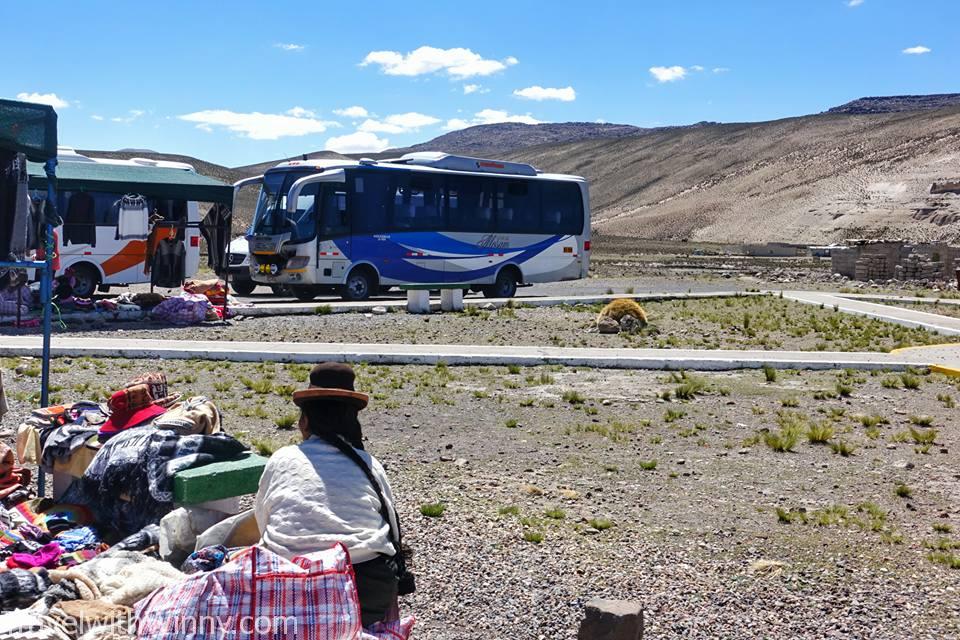 joining a tour maybe a little non-backer like. We did it out of pure convenience!~

These prices were extremely cheap compared to the online prices. Normally for 2D/1N Colca Canyon Bus Tour is around USD$69 online or more! Local price is only USD$23! Another noteworthy information is that many local agency will tell you that their tours are run privately and people on the tour will be in the same company. These are lies as most companies will group people in different companies (around 20 people) on the same bus running the same itinerary and at night, everyone will be dropped off at different accommodations. 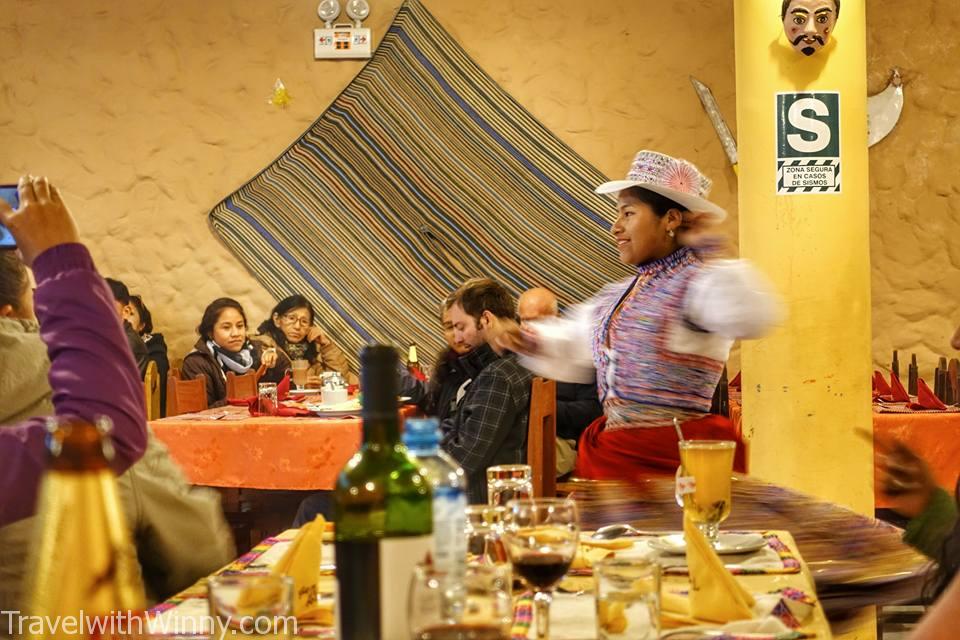 only down side of this Colca Canyon Bus Tour is at the dinner show, we have to pay the dinner fee of 25 sol.

Winny and I really wanted to hike the Colca Canyon but after some research we found that many people find the hike extremely difficult as it is harder to climb at a higher altitude. What was worst is that some people even suffered from serious altitude sickness. Considering that we are planning to do the Inca trail in a few days’ time we thought we would play it safe and do a Colca Canyon bus tour instead. Since we have the time and do not want to rush through Colca Canyon, we did the 2D/1N Colca Canyon Bus Tour. 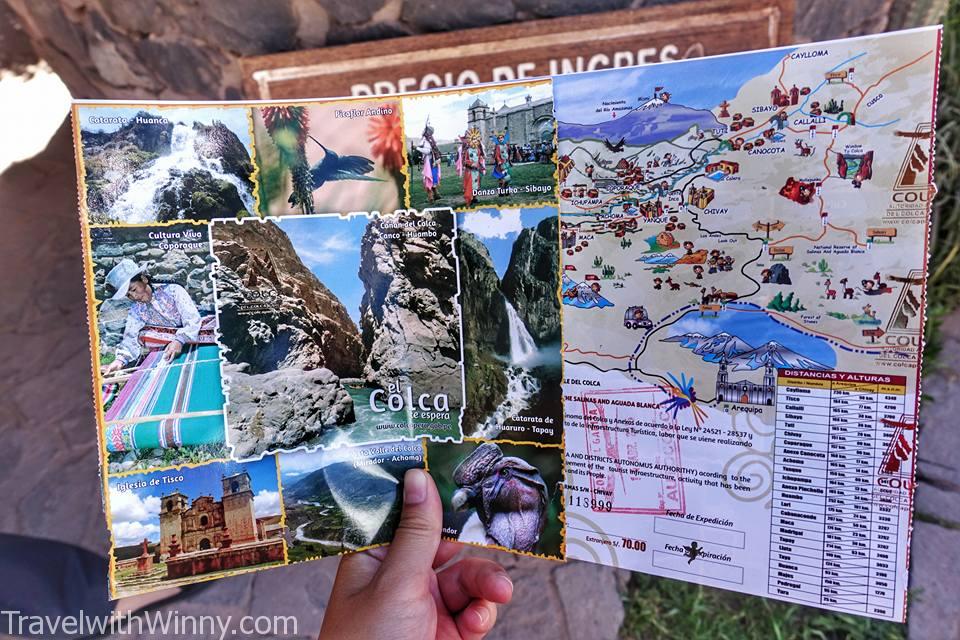 No tour companies include the Colca Canyon National Park entrance fee of 70 sol.

The following is the itinerary that we did in our 2D/1N Colca Canyon bus tour. All other itineraries listed above include these destinations but do them in different orders. 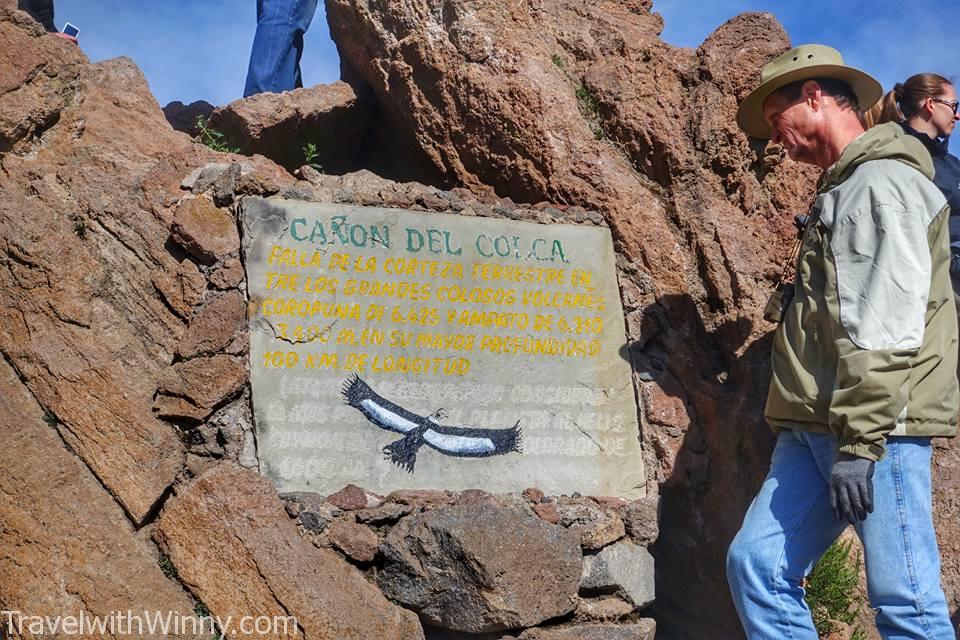 At the Cruz del Condors look out, you will be able to see these impressive birds spreading their wings.

The Condors are one of the largest flying birds in the world. Their wing span can reach 3.2 meters wide. The younger Condors are brown and the adult Condors are black with a ring of white feathers around the neck and they are bold on the head. We were quite lucky that day to see many Condors flying around the area. They were quite an impressive sight. 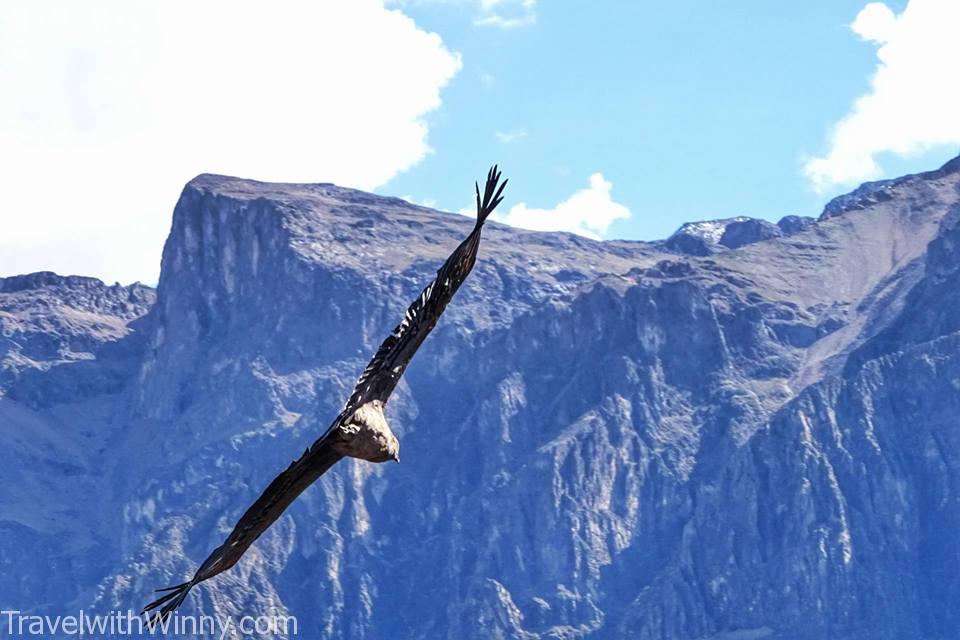 The condors flew over our heads a few times and the huge wing spans made crowds of people cheer!

We had sufficient time during our 2 days Colca Canyon bus tour and we spent around 1.5 hrs at the Cruz del Condors to watch these marvelous birds. Initially we didn’t see any condors for quite a while but before long, many were flying over our heads and the crowd was going wild cheering at the sight of these massive condors. Many people couldn’t believe how big these birds were. The Condors were flying very quickly so they were quite hard to capture on camera. 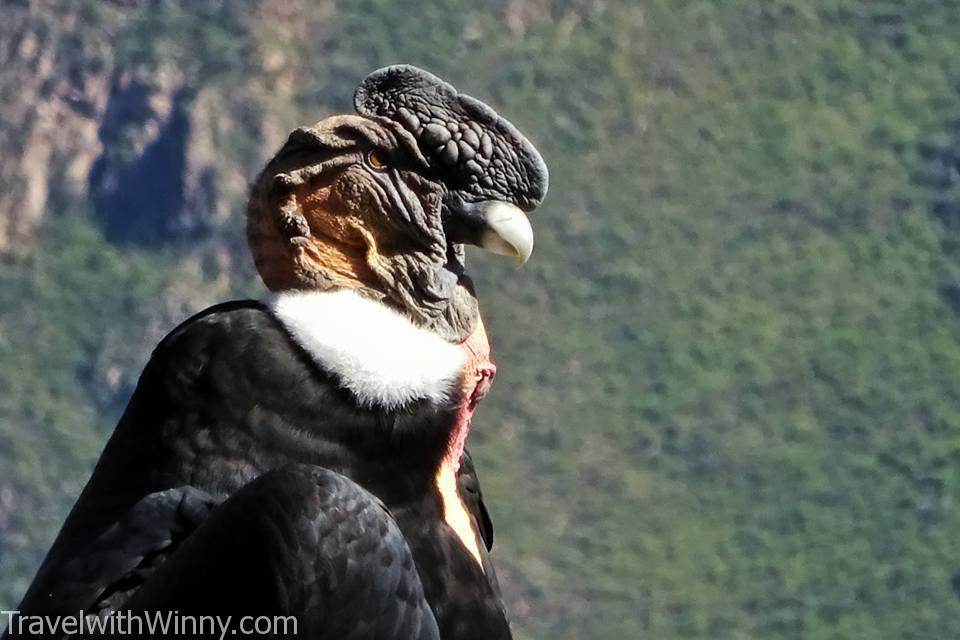 Luckily some of the condors rested close to us and I could capture their face with my WX350. Their heads are very bold!

The Condors are scavengers and will only eat the bodies of dead animals. They are no threat to humans. We stood there until the end of the 1.5hrs enjoying these massive condors and the beautiful Colca Canyon. 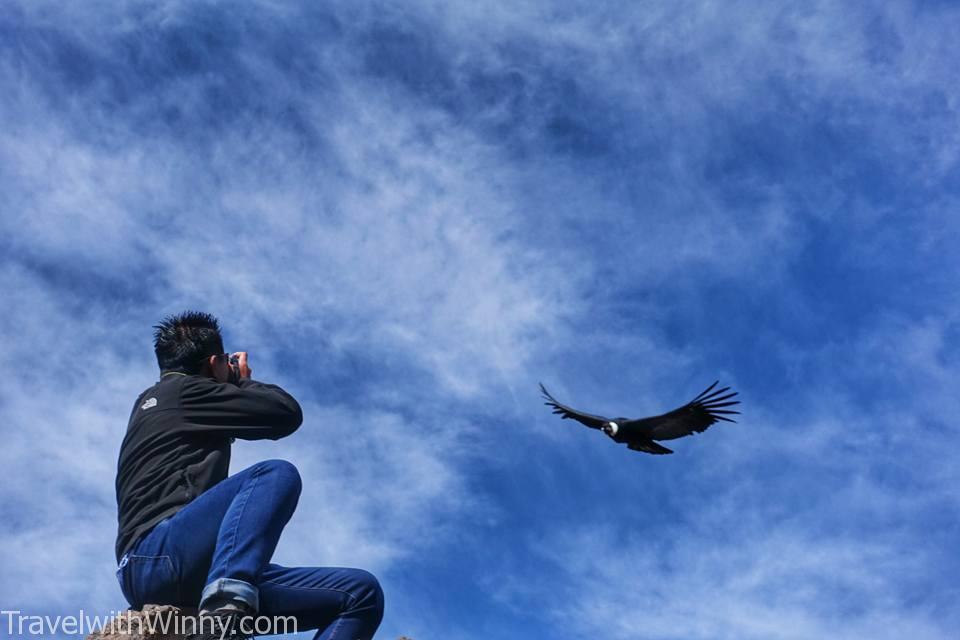 On the first day of our Colca Canyon bus tour from Arequipa to Chivay, we pass through an area called called“Salinas and Aguada Blanca National Reservation”. This National Reservation is to protect local animals and plants. We saw some Vicuña here at the reserve. They are related to Alpaca. 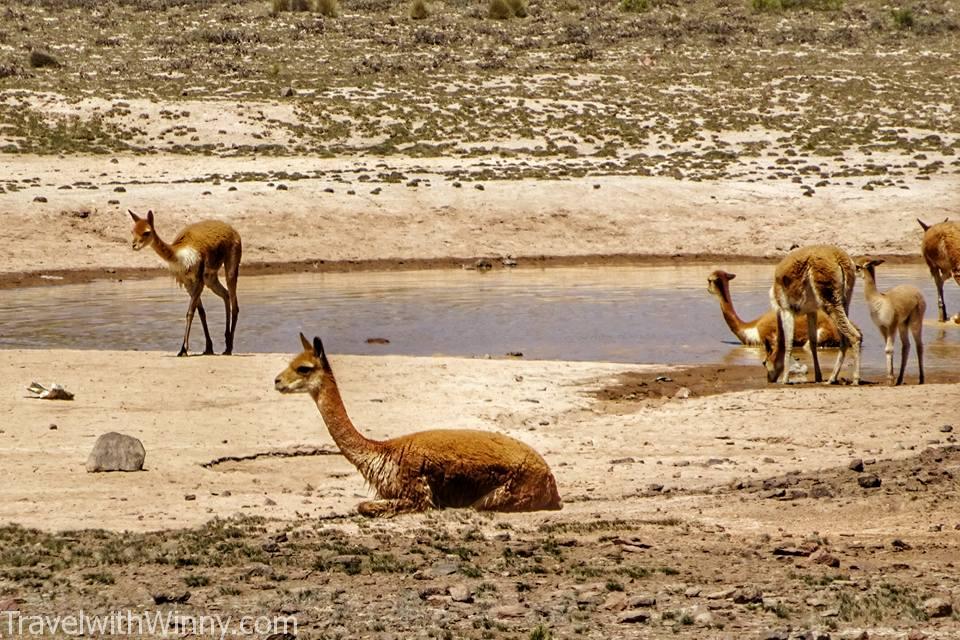 Vicuña really looks like a skinny Alpaca with ears…

Vicuña looks a little like Alpaca but they don’t have a hump. Their body are skinny and the heads are quite small. They have long necks with pointy ears and from a distance they look like wild dears. Due to their colors being so similar to the surroundings, we couldn’t spot them at all initially. 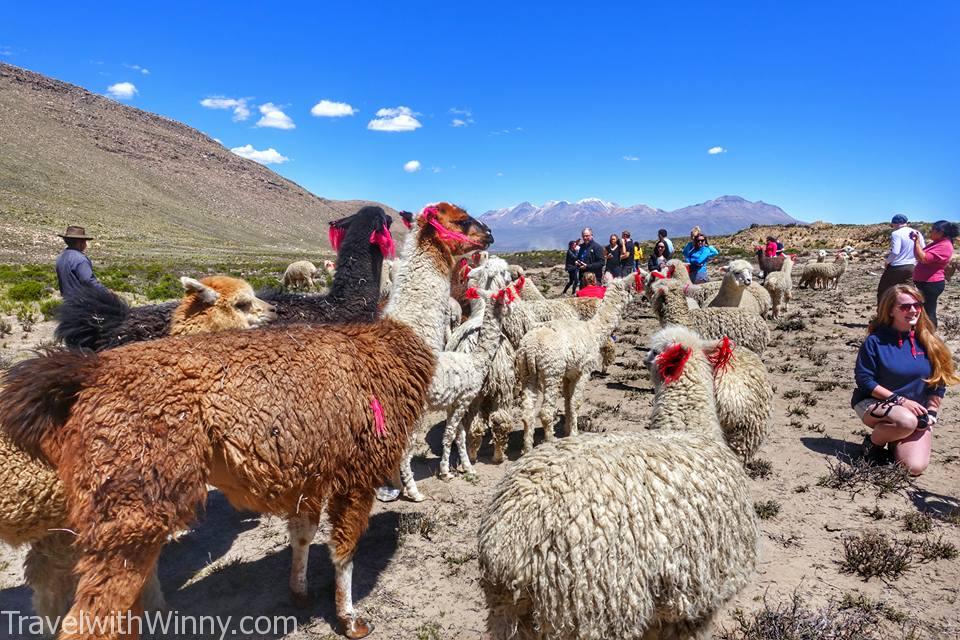 At the high mountains we saw a herd of domesticated alpacas!

Not long after we were let off the bus again to take pictures with a group of differently colored alpaca. They were quite shy as they keep running away when we approach them. Finally we found one that is willing to take pictures with us but time was up and we were ushered back on the bus. 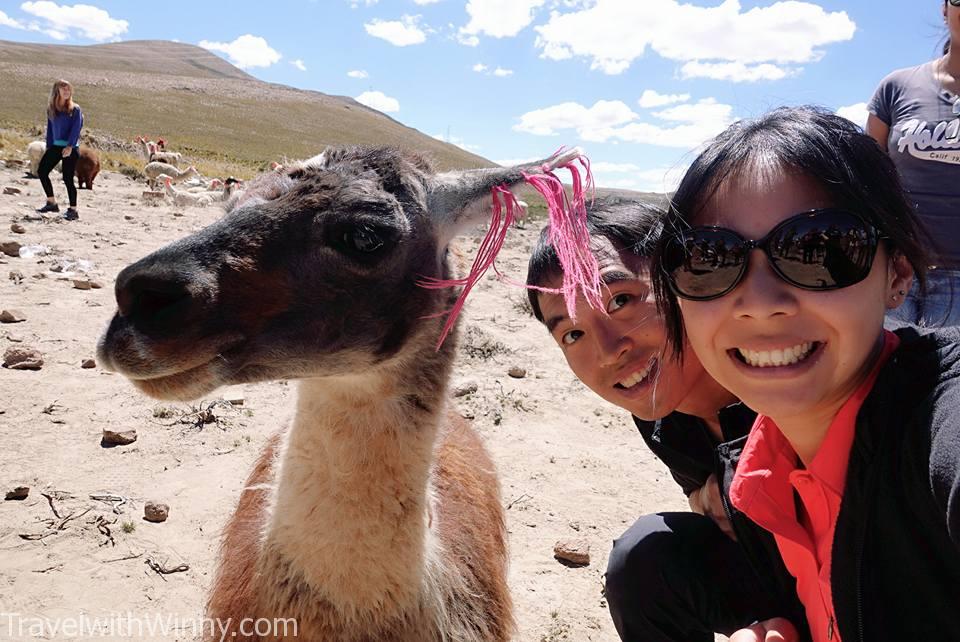 Bucket list to take a selfie with an alpaca… Ticked!!!

Many of the Alpacas ears were tied with these colorful strings. This is to keep track on which ones have been sheered. Alpaca fur grows extremely slowly and they could only be sheered once every two years. This is why Alpaca wool is so expensive. In Peru, you can find many cheap clothing on the streets claiming to be Alpaca wool but they are only made of cotton. Don’t be fooled! 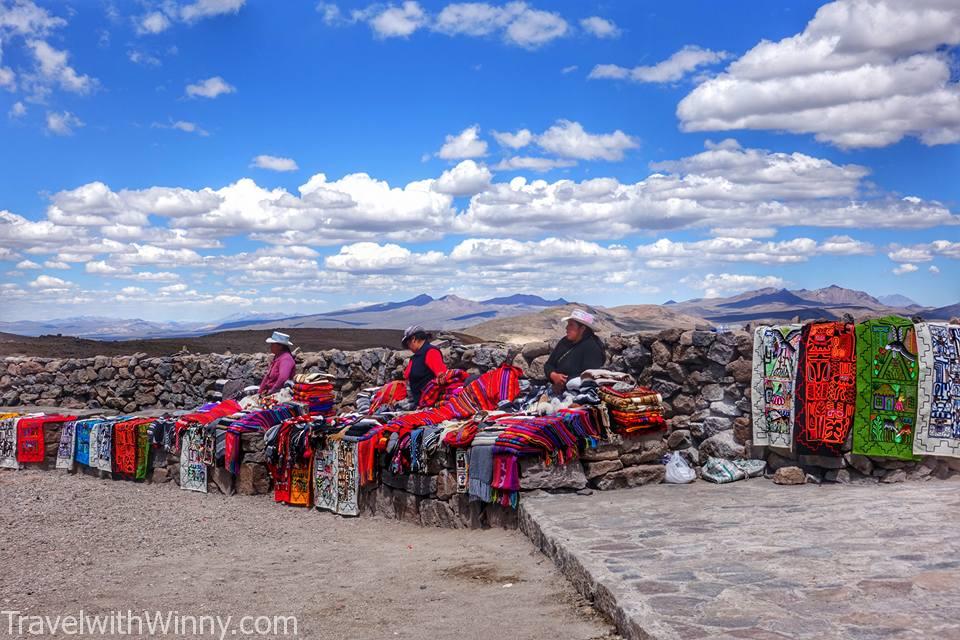 There are many fake alpaca wool clothing in Peru~

On our way to Cruz del Condors on the second day of Colca Canyon bus tour, we passed through a town next to Chivay called Yanque. There was a fountain at the main square and a group of kids dressed in traditional clothing doing a traditional dance around the fountain. The guide said that this is what these children do normally but I personally think it’s all set up for tourism. There was a little girl dressed in traditional clothes asking tourists for tips when she saw them taking photos of the dancing children. 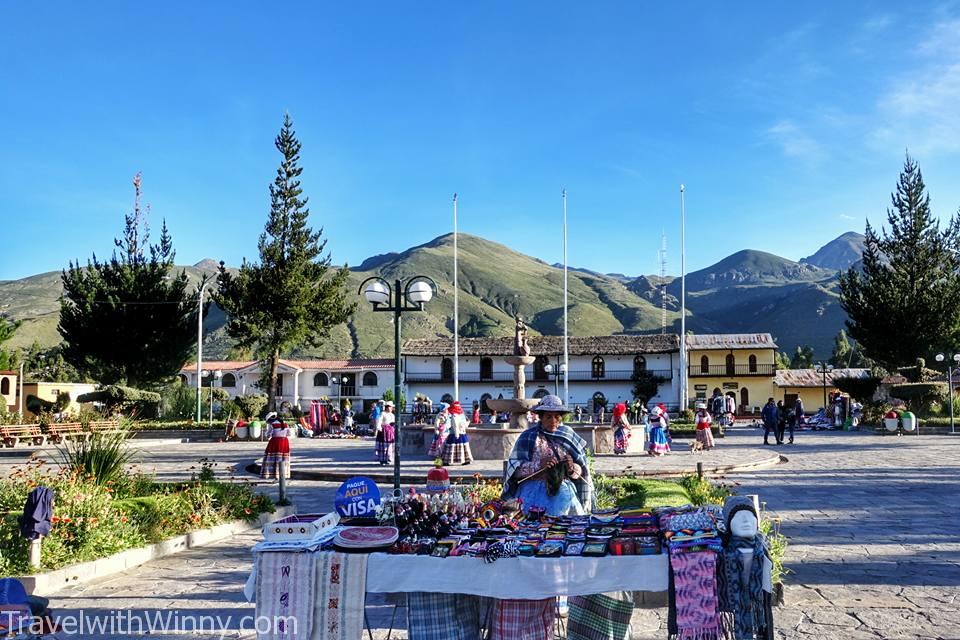 Traditional Yanque town made for tourism.

Next to the fountain were also group of older ladies dressed in traditional clothes selling handmade crafts. There were also another group of ladies holding llamas, alpacas and eagles with clipped wings waiting for tourists to take photos with them for 1 sol each. They were standing in designated circles drawn on the ground. 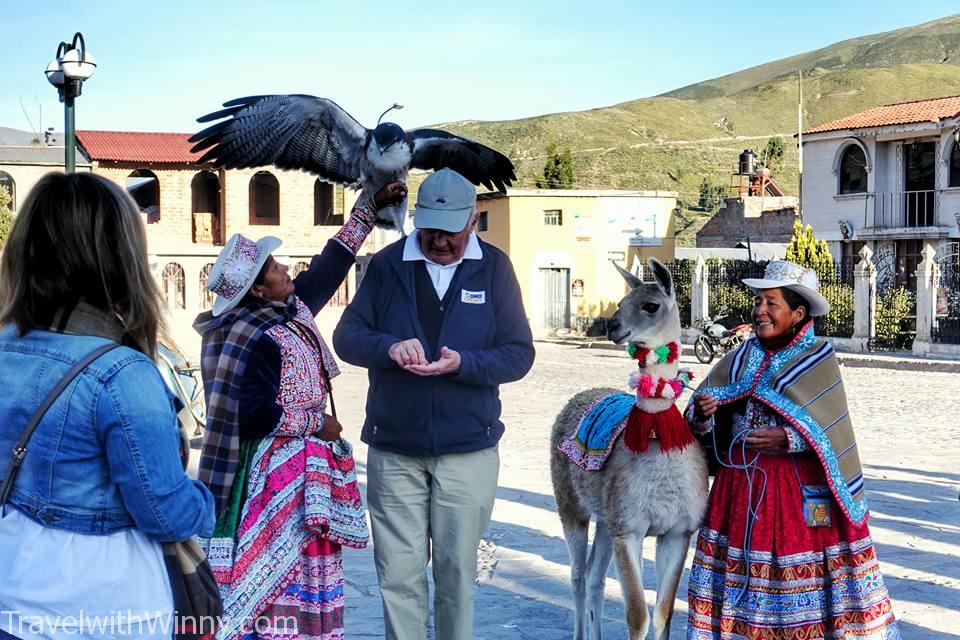 These ladies were holding some clipped wings eagles.

On one side of the main square, there was a very traditional church which you could visit as well. 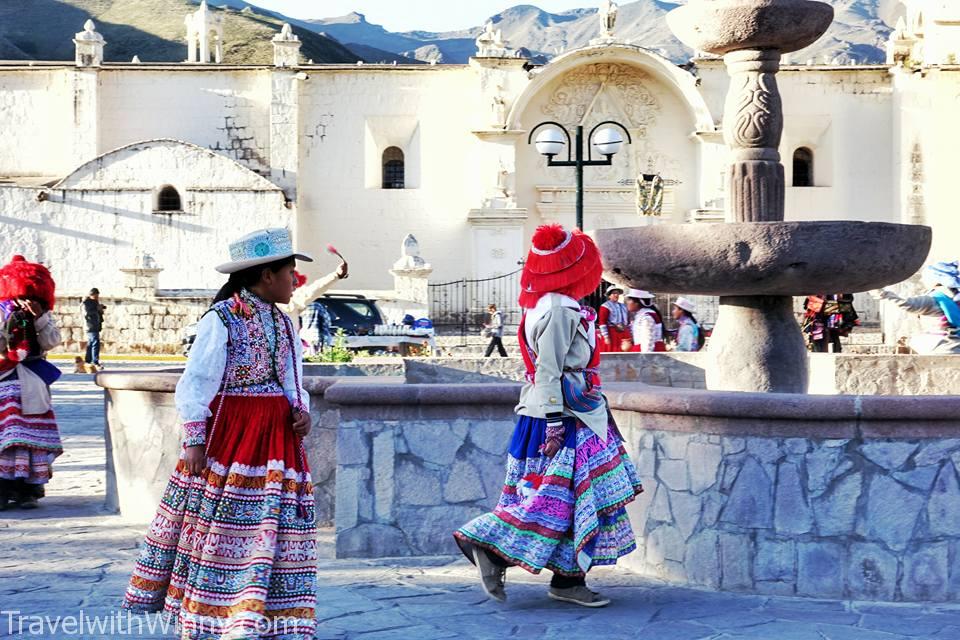 Children dancing around the fountain and a little girl was collecting tips.

No matter which itinerary you pick, you will be guaranteed this destination. La Calera Hot Springs is a natural volcanic spring with an entrance fee of 15 sol. usually people who did the Colca Canyon hikes couldn’t wait to come here for the hot springs. The place didn’t felt as special for us who did Colca Canyon bus tour since we have been sitting  the whole day. 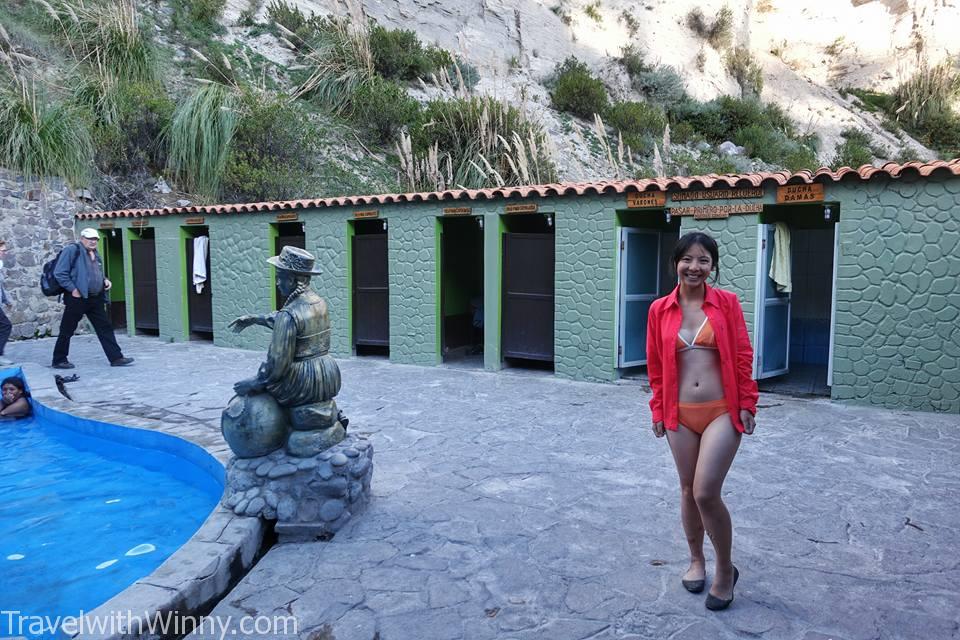 This hot spring is very basic. Unless I went for a hike, I wouldn’t have picked to come to this place.

I must admit that I was disappointed at this hot spring. Normally the hot spring is usually 70 degrees but after treatment, it is controlled at 38 degrees. The hot spring feels extremely cold compared to the typical Japanese hot spring. The facilities were extremely basic and there were broken windows separating the two pools. We were left there for 1.5 hours and I felt that the experience was a waste of money and time. 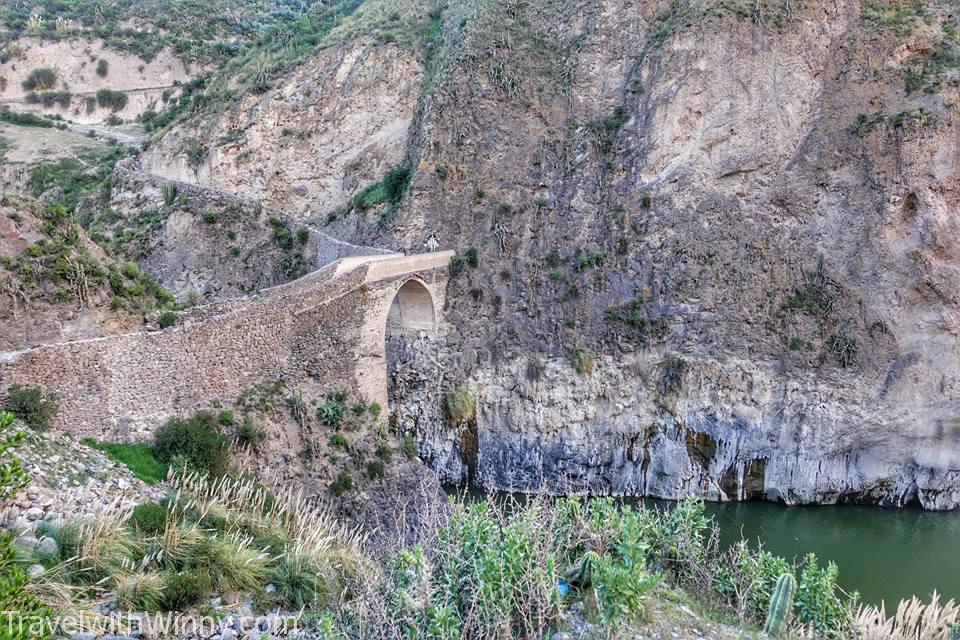 Just outside the hot spring place, there was a very beautiful bridge built by the Incas.

The highest altitude we reached in the whole Colca Canyon bus tour! 4910 meters! The bus reached this location on the first day before reaching Chiva. We did start to feel tingles in our fingers and a slight headache, these were signs of altitude sickness starting. Once we descend from there, the symptoms disappears, but we get to experience firsthand on what altitude sickness can be like. 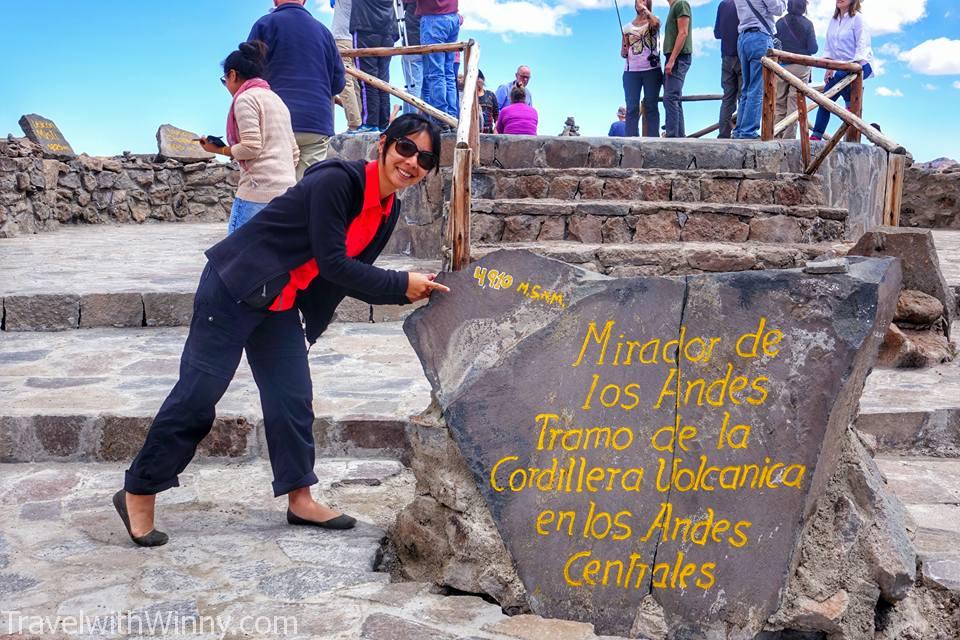 At an Altitude of 4910m we could really feel a slight headache.

The scenery here is extremely beautiful as the whole place is surrounded by volcanoes. The guide took some time explaining which Volcano is which but there were seriously too many to remember. 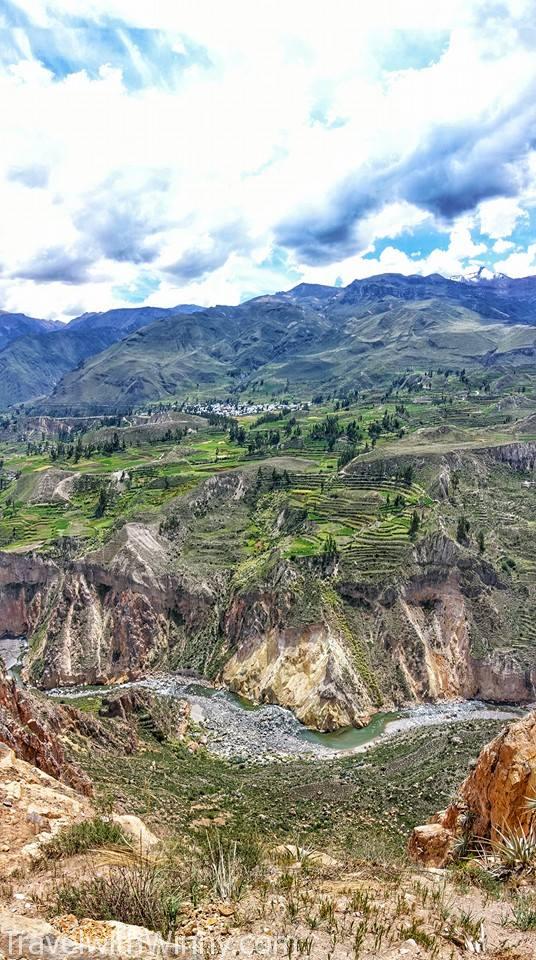 The scenery from the high mountain is truly amazing!

After we finished viewing the Condors, the guide took us on a simple 45 minutes walk to view the magnificent Colca Canyon from the top. It was a very flat trek but the sun was very intense so remember to apply some sun screen. The Colca Canyon is extremely beautiful from here. 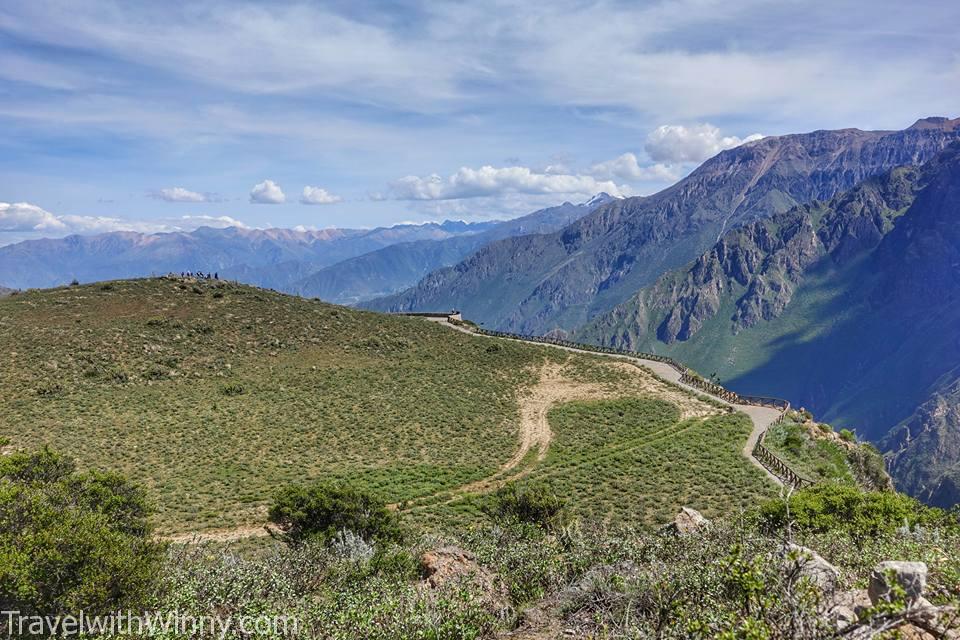 A flat trek to view the Colca Canyon from above.

Our 2 days and 1 night Colca Canyon bus tour including accommodation for only 75sol was extremely worth it! Although the accommodation didn’t have Wifi, the place was clean and comfortable. However, if only our Inca trail wasn’t planned so close to the Colca Canyon, I would have wanted to do the trekking of this world’s second deepest canyon. Hopefully I will have a chance to do this trek in the future! 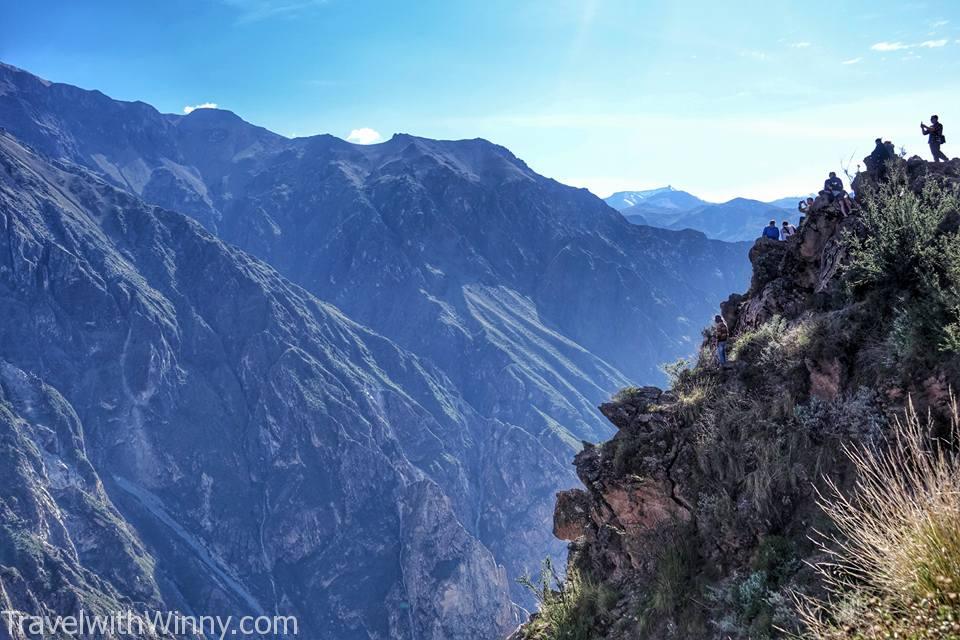 Maybe I will have chance to come back and challenge the Colca Canyon trek in the future!