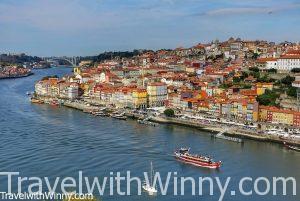 Porto is the second largest city in Portugal. It is becoming more and more popular in the recent years. The old town was listed as world heritage site by UNESCO in 1996. This beautiful city is built on a gradual slope with red colored tiled roof and building featuring the pretty patters of Portuguese tiles. Although many of the cities oldest buildings are abandoned and are at the verge of collapsing, it adds to another character to the city.